Like many countries, Syria is feeling the economic fallout from the war in Ukraine, as global market upset sends food prices soaring. But the Ukraine factor is but one of many pressure points for vulnerable families in a country still reeling from the impacts of its own violent conflict that began over a decade ago. UNICEF explains the urgency of its latest appeal for emergency support.

Syria continues to represent one of the world's most complex emergencies. And for millions of vulnerable children living in and around the country, every day they must wait for help is one day too many.

That was UNICEF's urgent message at a recent convening of world leaders to discuss the country's multi-layered crisis fueled by over a decade of war. Humanitarian needs in Syria today are unprecedented, according to its latest assessment, aggravated by displacement, destruction of critical infrastructure and sweeping social and economic collapse. Some 90 percent of the population is living in poverty.

Syria is also one of several countries feeling the economic fallout from the war in Ukraine, as global market upset sends food prices soaring. 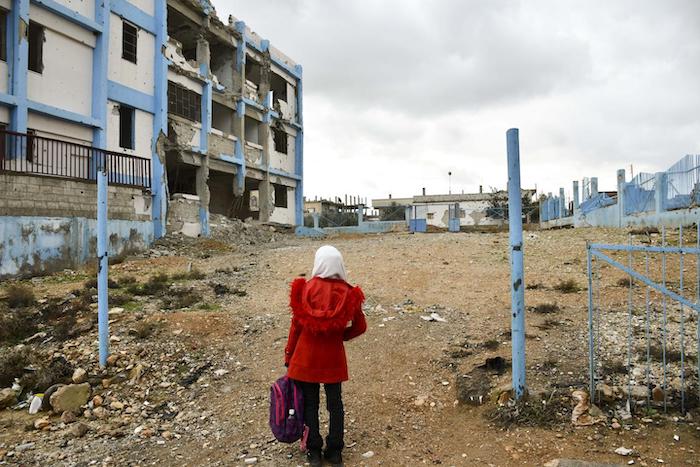 Aya, 14, looks at her old school, damaged by shelling in Dara’a Albalad, south Syria, on Feb. 7, 2022. With support from Educate A Child and other partners, UNICEF completed the rehabilitation of four schools in the community, enabling over 2,600 students, including Aya, to go back to school in a safe environment. Read more. © UNICEF Syria/Shahan

For most, the current situation represents some of the harshest and most challenging circumstances the people of Syria have faced since the beginning of the crisis 11 years ago. An estimated 14.6 million people — including 6.5 million Syrian children — are in need of humanitarian assistance, a peak number that reflects that added burdens of the COVID-19 pandemic, increasing turbulence in the global economy and the impacts of sanctions.

On July 10, the UN Security Council will vote on the renewal of a resolution permitting UN partners to deliver assistance to embattled northern Syria — a move that UNICEF Executive Director Catherine Russell called a “critical milestone." But Russell was also quick to point out the urgent need to mobilize more resources to scale up recovery efforts all across the country.

“Most of the basic systems and services children depend on — health, nutrition, water and sanitation, education, and social protection — have been cut to the bone,” Russell said, speaking at a two-day conference in Brussels. “There is an entire generation struggling to survive.”

There are significant needs in all major UNICEF program areas. Water, sanitation and hygiene systems and services need shoring up. Millions of children need nutrition support and improved access to health care. 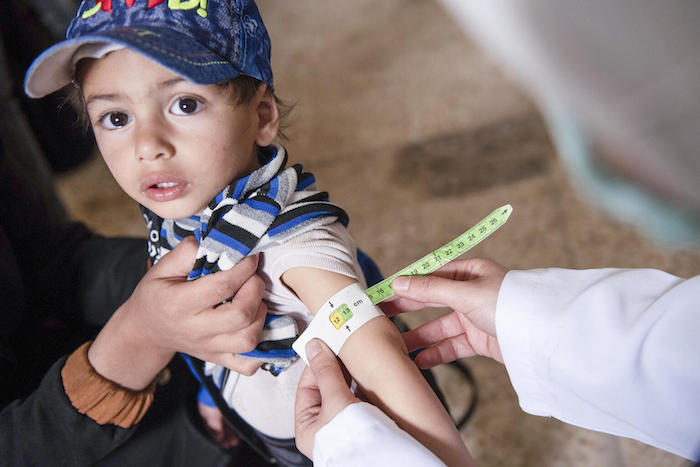 Ishak, 2, shows signs of recovery from malnutrition at a follow-up screening with a UNICEF-supported mobile health and nutrition team in Jarba village, East Ghouta, on April 3, 2022. The mobile team is one of seven reaching children and mothers in rural Damascus, rural Dara’a and rural Quneitra in south Syria. Read more. © UNICEF/UN0634997/Belal

UNICEF's focus, as always, is on rebuilding critical systems while strengthening resilience and supporting and improving sustained, equitable and safe access to essential services in areas where needs are highest.

Syria’s recovery will also take investing in — and removing barriers to — children's education. With help from UNICEF and partners, which include local communities, teachers, civil society and international organizations, an estimated 4.5 million children have been able to access some form of learning; yet there are still more than 3 million Syrian children out of school, children who are more likely to fall prey to child labor, early and forced marriage, trafficking and recruitment into the fighting.

UNICEF continues to lead efforts toward rehabilitating schools, setting up curriculum and training personnel to help children catch up and keep learning. 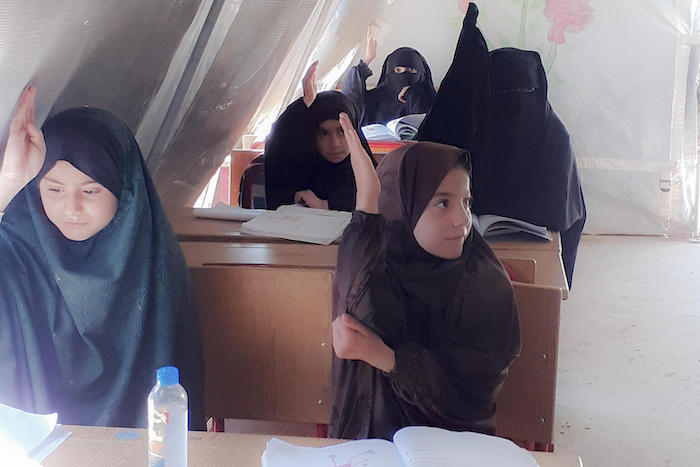 UNICEF helps out-of-school children continue learning in a safe space with the help of volunteers at the Al-Hol camp in northeast Syria. © UNICEF/UN0610596/

There are also 2.8 million Syrian children living as refugees in Jordan, Lebanon, Iraq, Egypt and Turkey. Like Syria, these neighboring countries are also feeling the effects of the war in Ukraine in the form of increased food insecurity and malnutrition rates, effects that disproportionately impact refugee and displaced families. Only 2 percent of refugee households in Jordan are estimated to meet their essential food needs, according to UNICEF. Nearly 750,000 children in Syria's neighboring countries are out of school.

UNICEF continues to rely on its strong longstanding presence on the ground and its partnerships with local communities and organizations across multiple sectors to reach more children and families. Given Syria’s limited power and fuel supplies, UNICEF focuses on “climate smart” approaches, adapting to increasing water scarcity and deteriorating water quality, and investing in climate-resilient technologies and systems with a focus on renewable energies.

UNICEF is also working to scale up unconditional cash transfers for the most vulnerable children — including children with disabilities and children in poor urban areas. Linking cash assistance to case management of individual children has been shown to help families avoid harmful coping strategies.

UNICEF continues to call for an end to the war — and an end to all grave violations against children, including the killing and injuring of children. There are nearly 13,000 verified reports of children in Syria being killed or injured since the conflict began, and the total is likely much higher.

"Until a sustainable solution can be reached," Russell said, "UNICEF and our partners will continue to do everything we can to reach every child, wherever they are.” 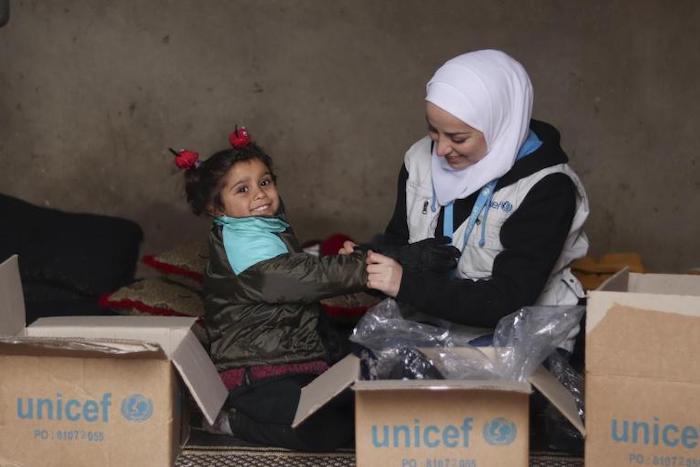 A UNICEF staff member helps a child in Syria try on a new coat. © UNICEF/Syria2019/Khudr Al-Issa

Top photo: Displaced Syrian children help their parents distribute winter clothes from UNICEF at the Al-Hol camp in Hasakah, northeast Syria, on March 2, 2022. The combined effects of Syria's economic downturn, the COVID-19 pandemic and over a decade of conflict have increased hardships across the country, prompting UNICEF to seek support to scale up its emergency response. © UNICEF/UN0612159/Souleiman