On a spring day in a village in Rural Damascus, Syria, 22-year-old Abir beams as she watches her 2-year-old son, Ishak, play outside their home. “I used to look at my son and feel sad. He was very thin and didn't have the energy to play with his brother and cousins,” she says. “Luckily those days are over. Now, he never stops playing and jumping around!”

Ishak lives with his older brother, Jamal, his parents, grandparents, uncle and aunt. “We can’t afford to live in a separate house,” explains Abir. Her husband, Mohamed, was injured in Syria's ongoing conflict. These days, he works as a delivery man at the village market. With the declining economic situation and skyrocketing food prices across the country, his daily wages doesn't go far.

Ishak’s grandfather supports the family with the modest salary he makes from his job as a postman. Rana, Ishak's grandmother, planted herbs and vegetables in a small plot near the house. The family depends on the garden for food. For the first six months of his life, Ishak was breastfed. Abir tried introducing solid food, but Ishak had difficulties adjusting. His asthma attacks, sometimes lasting up to 20 days, made things worse. “Ishak started walking and teething later than other children in his age,” his mother recalls.

“I didn’t know where or who to turn to,” Abir says. Syria's civil war has severely damaged the country's health care system, making it difficult to find primary health care and nutrition services in Rural Damascus. Even when services are available, many people cannot afford to pay for them. 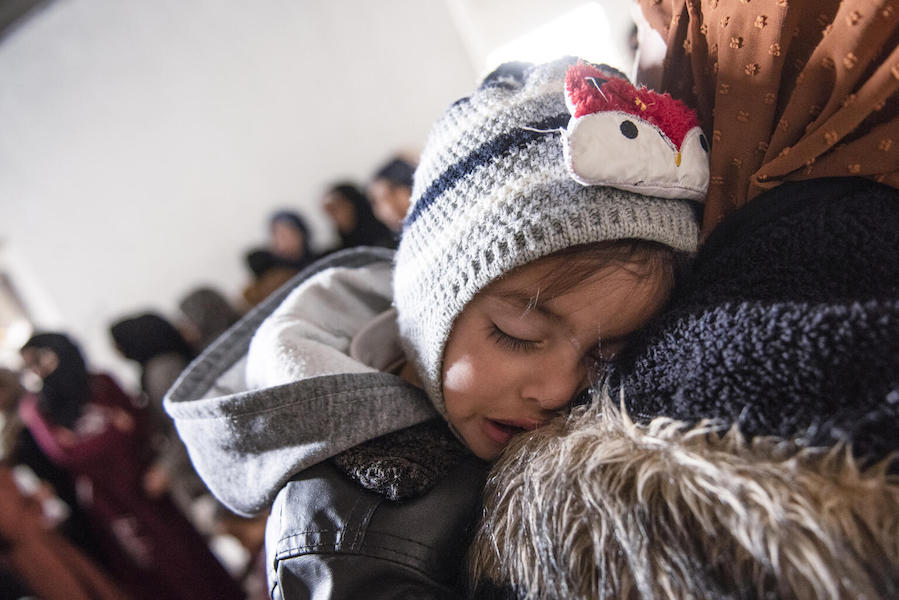 In December 2021, Abir took Ishak to a UNICEF -supported mobile health and nutrition team, one of seven teams reaching children and mothers in Rural Damascus, rural Dara’a and Rural Quneitra, south Syria. “When I heard about the team visiting our village twice a week, I rushed Ishak for a checkup," Abir says. "After the examination, they told me he suffered from moderate acute malnutrition.” 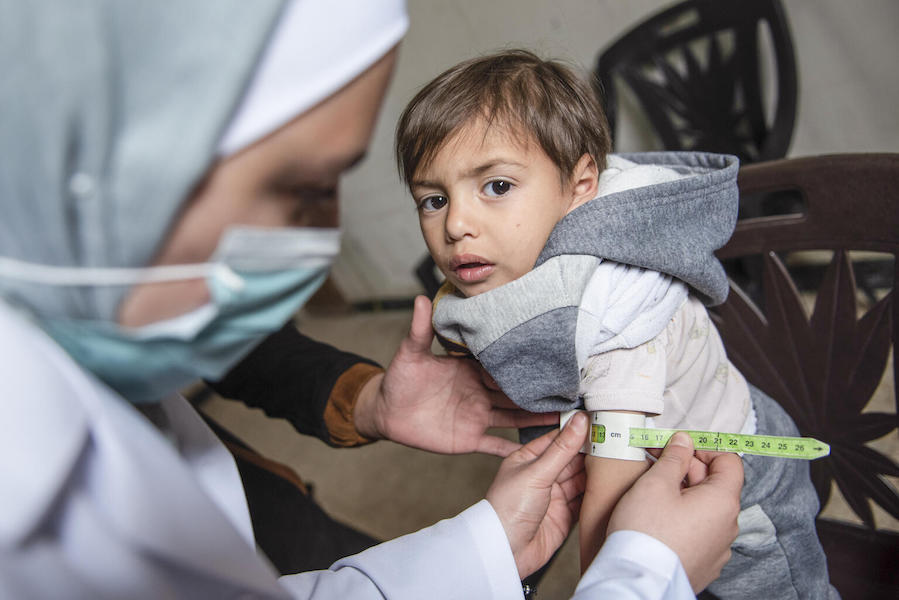 Abir began visiting the mobile team once a week to provide Ishak with the vitamins and nutritional supplements he needed as part of his treatment plan. “Whenever I missed an appointment for some reason, they’d call and check on him and remind me to come for a follow-up appointment. The support we received from them has been great!” 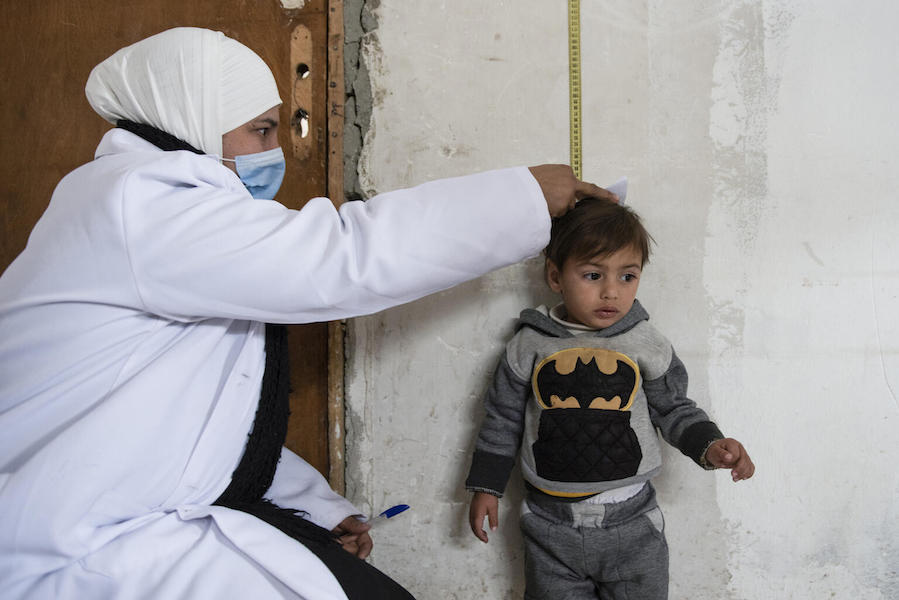 Just one week after he started treatment, Ishak’s appetite began to improve. Gradually, he started to gain weight and he began to walk. He started his first attempts to talk, saying a few words. “When he said Mom, I cried. My son is just like any other child. He just needed some medical support,” she says. 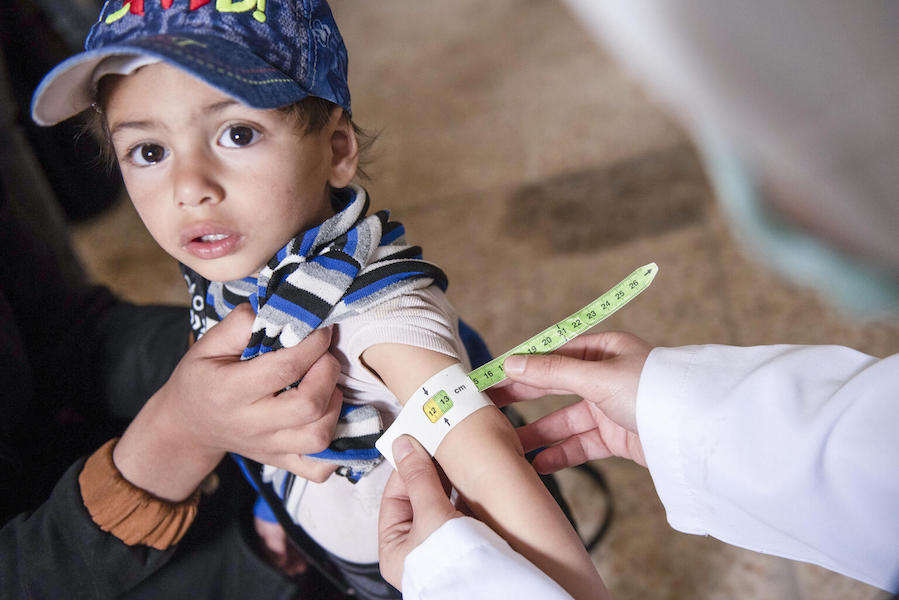 In late March 2022, during a visit to the UNICEF -supported mobile health team, Abir finally heard the news she had been holding her breath for. Ishak had finally recovered from malnutrition. “I couldn’t hold back my tears in that moment. We’ve been blessed with this help,” she says. 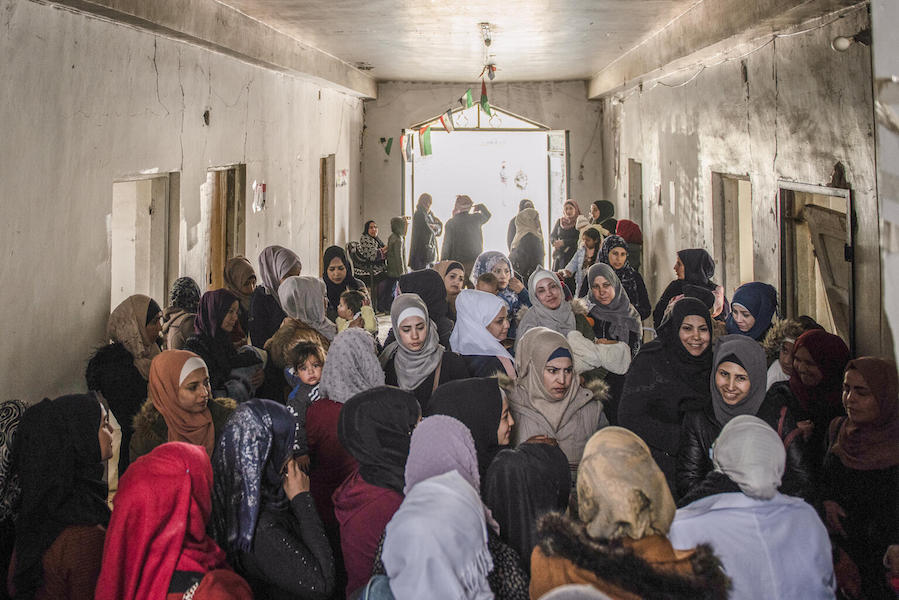 Ishak's happy and healthy now, but there are many children just like him who are suffering from malnutrition in Syria. Above, mothers and children in Jarba village, East Ghouta, Rural Damascus, Syria, wait to receive health and nutrition support from a UNICEF-supported mobile team.

Help UNICEF reach every child in need with lifesaving support and scale up solutions that save lives. Donate today.