With the release of new data, UNICEF renews its global call to action to do what is necessary to build climate resilience and protect the most vulnerable.

A new report from UNICEF released today concludes that nearly half of the world's children — roughly 1 billion — live in one of 33 countries classified as "extremely high risk" due to climate change impacts.

"The Climate Crisis Is a Child Rights Crisis: Introducing the Children's Climate Risk Index" is the first comprehensive analysis of climate risk from a child's perspective — ranking countries based on level of exposure to climate-related shocks, such as cyclones and heat waves, and their relative vulnerability based on access to essential services. 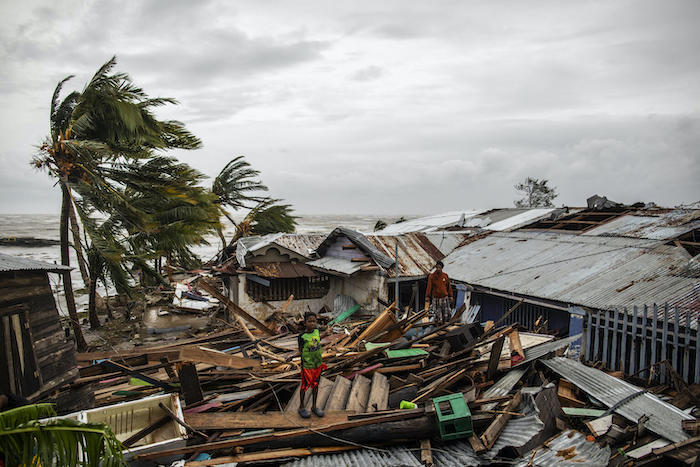 In Bilwi, Nicaragua, a child looks for scraps of wood to help his parents rebuild their house after it was destroyed by strong winds and rains brought by Hurricane Iota in November 2020. © UNICEF/UN0372811/Ocon/AFP-Services

'The climate crisis is a child's rights crisis'

UNICEF collaborated with Fridays for Future, a youth-led global climate strike movement, and other partners to produce the report. Its release comes on the heels of another landmark report by the UN's Intergovernmental Panel on Climate Change (IPCC) — a scientific assessment that UN Secretary-General António Guterres called a code red for humanity. It also coincides with the third anniversary of the FFF movement, which began when Greta Thunberg staged her first protests outside the Swedish parliament in August 2018.

The findings in "Climate Crisis" detail how climate change impacts threaten children's health, education and protection by increasing their exposure to life-threatening diseases, among other dangers. Young people in Central African Republic, Chad, Nigeria, Guinea and Guinea-Bissau are the most at risk among 163 nations of the world included in the report's rankings. 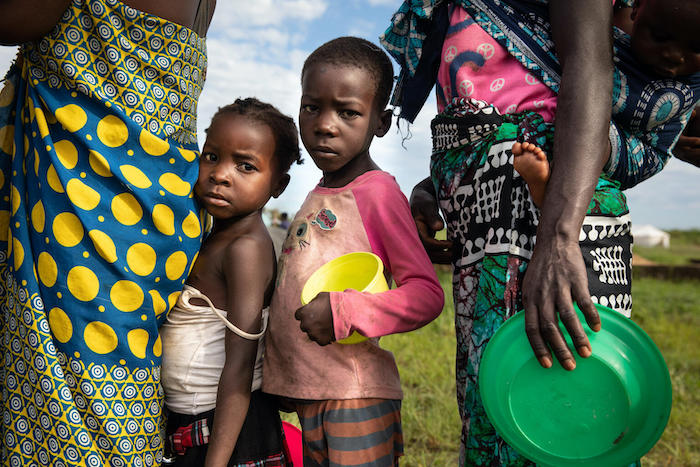 Children displaced by Tropical Cyclone Eloise queue for food at the UNICEF-supported Tica Relocation Center, about 49 miles outside the city of Beira, Mozambique. Many families lost homes and possessions, arriving at the shelter with only the clothing they wore. Long after the storms' winds died down, flooding remained a major threat to health and safety in the hardest hit communities. © UNICEF/UN0407065/Franco

For kids facing extremely high levels of risk, it is a combination of high exposure to climate shocks compounded by the fact that critical services and related social support systems were inadequate to begin with. As the impacts of climate change accelerate, that 1 billion estimate is likely to grow, UNICEF warns.

"For the first time, we have a complete picture of where and how children are vulnerable to climate change, and that picture is almost unimaginably dire," said Henrietta Fore, UNICEF Executive Director. "For three years, children have raised their voices around the world to demand action. UNICEF supports their calls for change with an unarguable message — the climate crisis is a child's rights crisis." 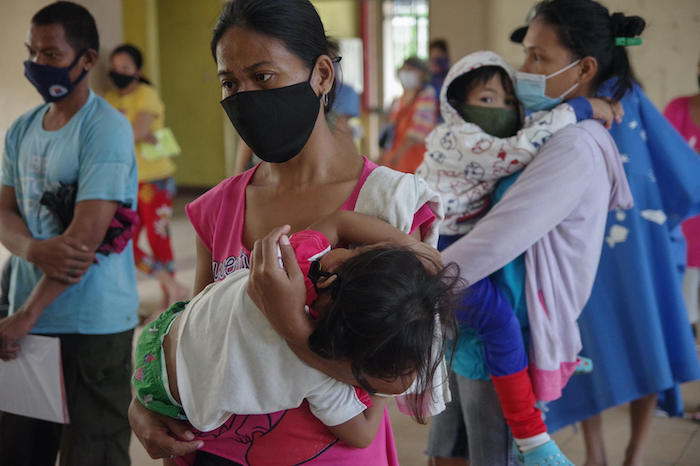 In Baseco Compound, Manila, evacuees line up to register at a UNICEF-supported shelter as Typhoon Goni made landfall in the Philippines on November 1, 2020. © UNICEF/UN0358332/Piojo

UNICEF's data show that nearly every child in the world is at risk from at least one of these climate and environmental hazards. Kids in the worst-affected countries, however, face multiple and often overlapping climate-related shocks, threatening to further erode developmental progress and deepen child deprivations. 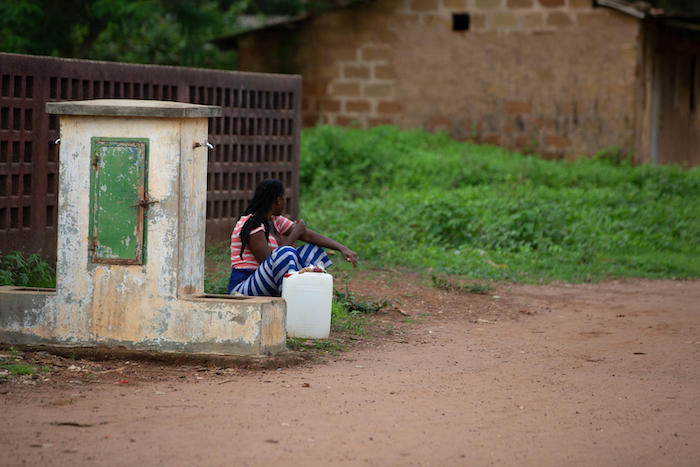 A woman sits by a safe water access point in Koba, Kindia, a town in western-central Guinea. A new UNICEF report indicates children and families in Guinea are at extremely high risk due to the effects of climate change, which includes water scarcity. © UNICEF/UNI365024/Mazboudi

There is a disconnect between where greenhouse gas emissions are generated and where children are enduring the most significant climate-driven impacts: The 33 'extremely high-risk' countries collectively emit just 9 percent of global carbon dioxide emissions, the report notes. Conversely, the 10 highest-emitting countries collectively account for nearly 70 percent of global emissions. Only one of these countries is ranked as 'extremely high risk' in the index.

"Climate change is deeply inequitable," Fore said. "While no child is responsible for rising global temperatures, they will pay the highest costs."

There is still time to act, however. Improving children's access to water and sanitation, health, education and other essential services "can significantly increase their ability to survive these climate hazards," Fore added.

Protecting the future of all the world's children

UNICEF is urging governments and businesses to listen to children and prioritize actions that protect them from climate change impacts while accelerating efforts to dramatically reduce greenhouse gas emissions by at least 45 percent (compared to 2010 levels) by 2030 to keep warming to no more than 1.5 degrees Celsius. According to the IPCC, global greenhouse gas emissions need to be halved by 2030 — and cut to zero by 2050 — to avoid the worse impacts, but most countries are not on track to meet these targets. One of the most sustainable solutions is the transition towards an economic model which decouples economic growth from fossil fuel consumption.

UNICEF is also urging all relevant actors to: 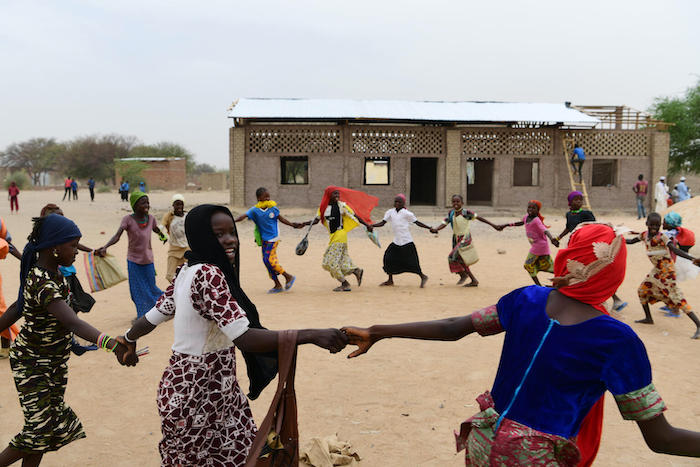 Students take a break in the playground outside a school in Gaoui, a suburb of Ndjamena, Chad. UNICEF is working with the government on a plan to construct classrooms using unprocessed plastic bottles as a way to recycle waste while also improving the school environment. © UNICEF/UN0469206/Dejongh

Thunberg and fellow youth activists Frazana Faruk Jhumu of Bangladesh, Eric Njuguna of Kenya and Adriana Calderón of Mexico co-authored the foreword to the new Climate Crisis report (and a related opinion piece for the New York Times). "Movements of young climate activists will continue to rise, continue to grow and continue to fight for what is right because we have no other choice," the four wrote. "We must acknowledge where we stand, treat climate change like the crisis it is and act with the urgency required to ensure today's children inherit a livable planet."

Learn more about how climate change is endangering the health, safety and well-being of children around the world. Read the full report.

Join UNICEF in calling on elected officials to prioritize the protection of children from the impacts of climate change.