Rohingya Refugee Children Are in Desperate Need of Help 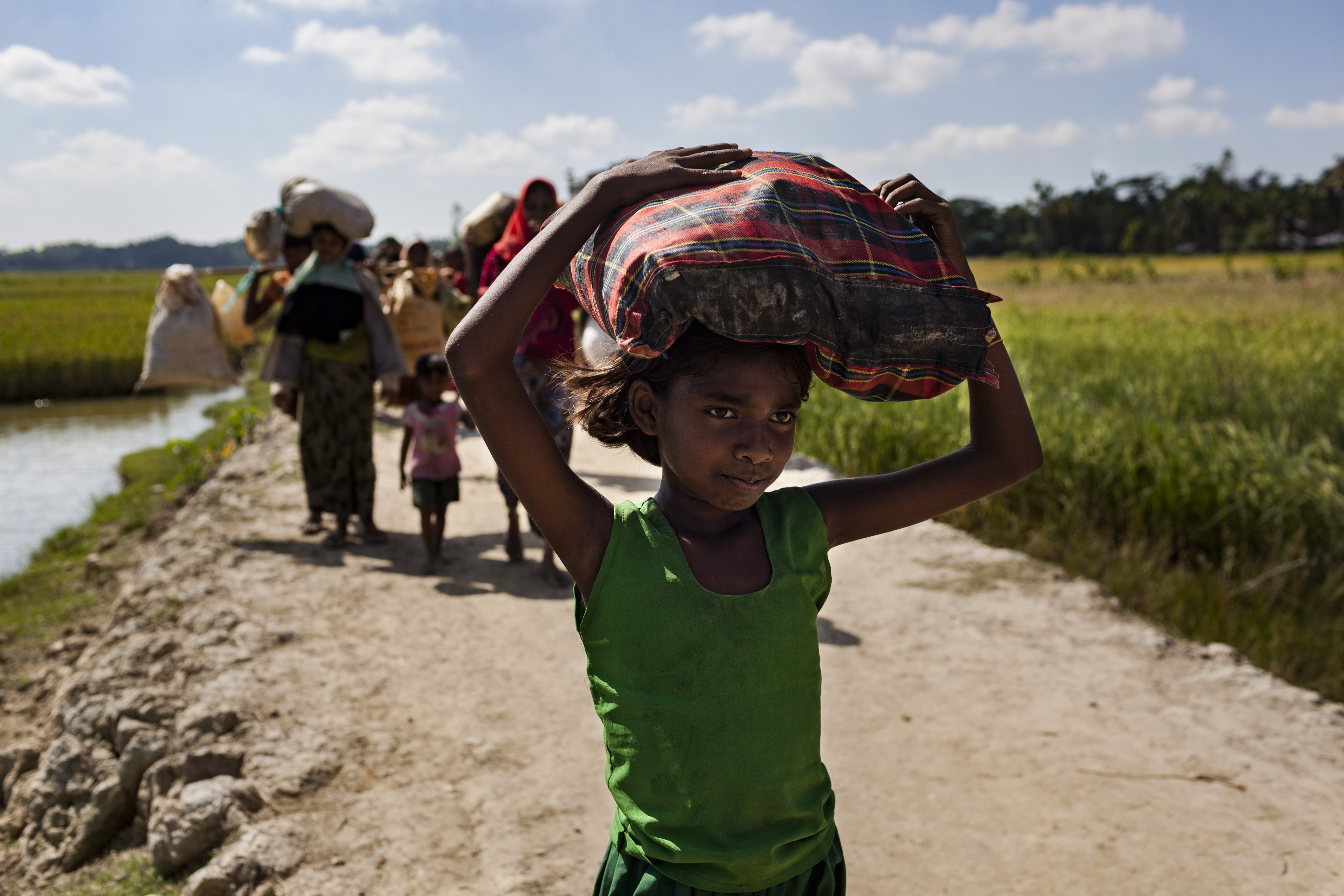 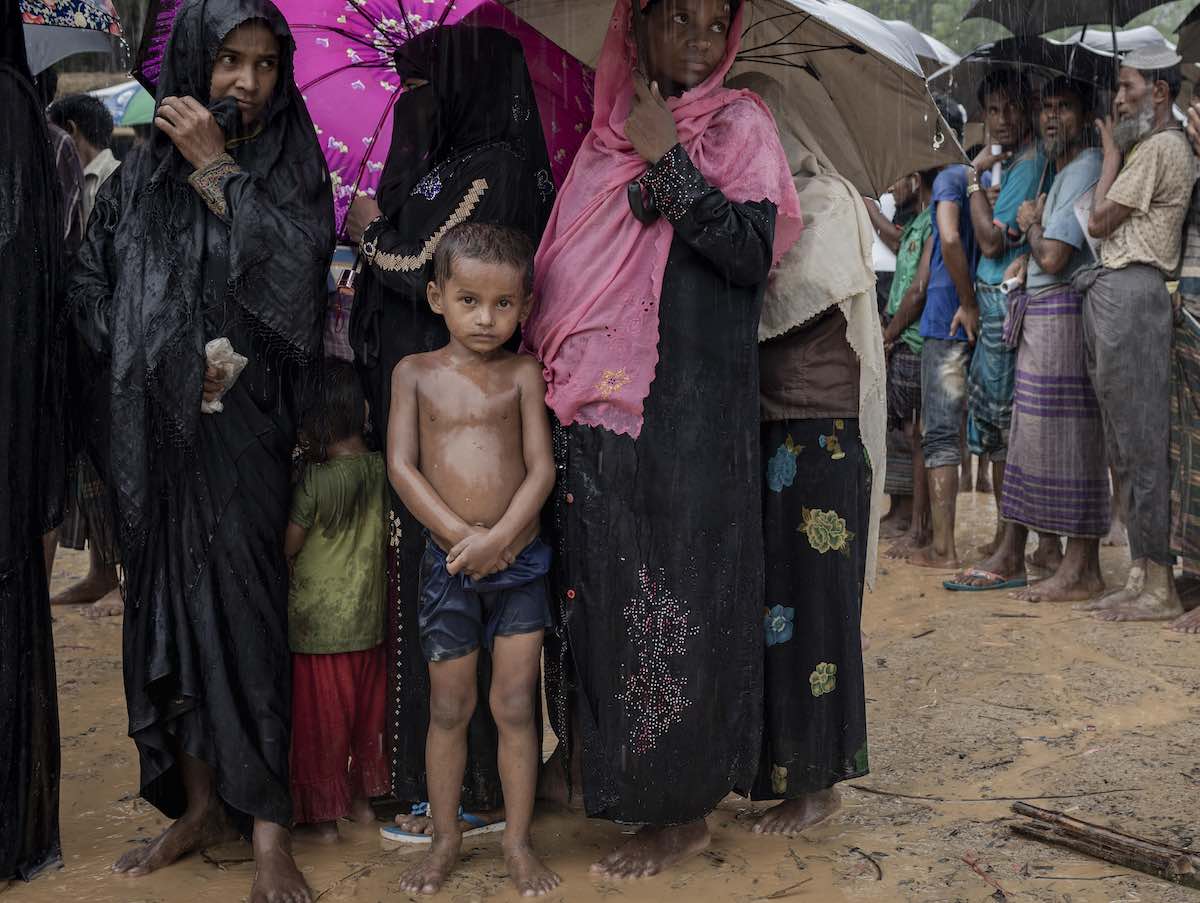 UNICEF Alert:
900,000 Rohingya Refugees Struggle for a Future
In 2017, hundreds of thousands of Rohingya fled violence in Myanmar for Bangladesh. Now a generation of children face uncertain futures. 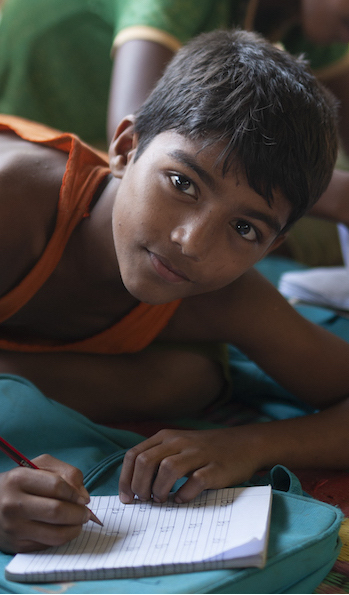 “The route to school gets slippery,” says Rashidullah. Monsoon rains aren’t enough to keep Rashidullah from the UNICEF Learning Center. 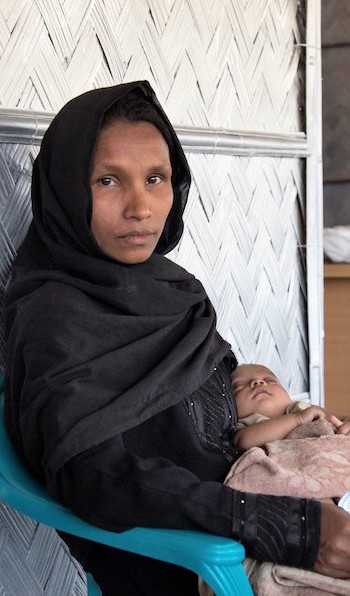 “I had never heard of vaccination,” says Mustapha. But thanks to UNICEF, all her children are now vaccinated. 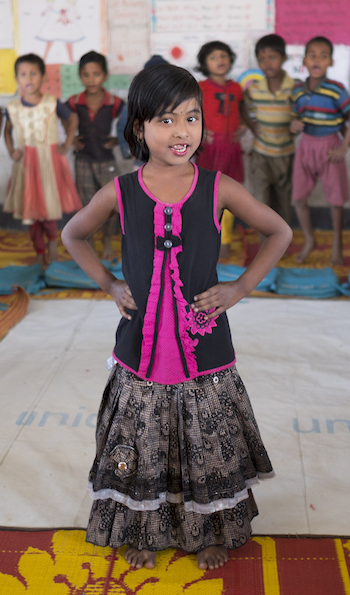 “When I dance and sing I am most happy,” says Sehera. She attends one of the 795 UNICEF learning centers. 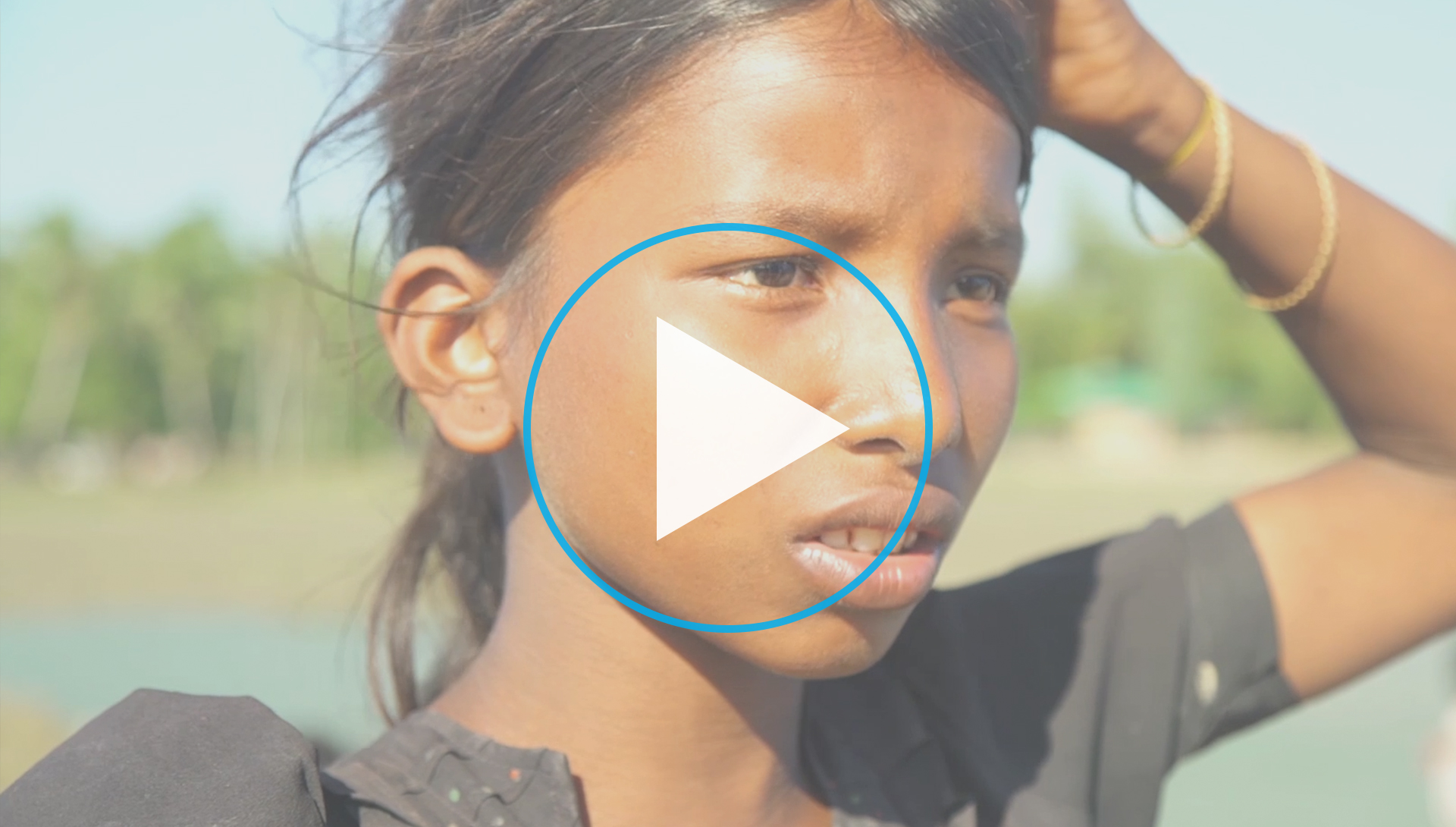 Click to watch Umme's story!
12-year-old Rohingya refugee Umme and her family fled the mass killings of their people in Myanmar for safety in Bangladesh. But, now with monsoon season here, she may be up against another fight for her life.
Read Umme's Full Story
Brutal violence forced Rohingya refugee Momtas and her family to flee Myanmar for Bangladesh. Now she struggles to feed her children. UNICEF is providing food supplements and nutritional counseling to help refugee children survive.
Read Momtas' s Full Story 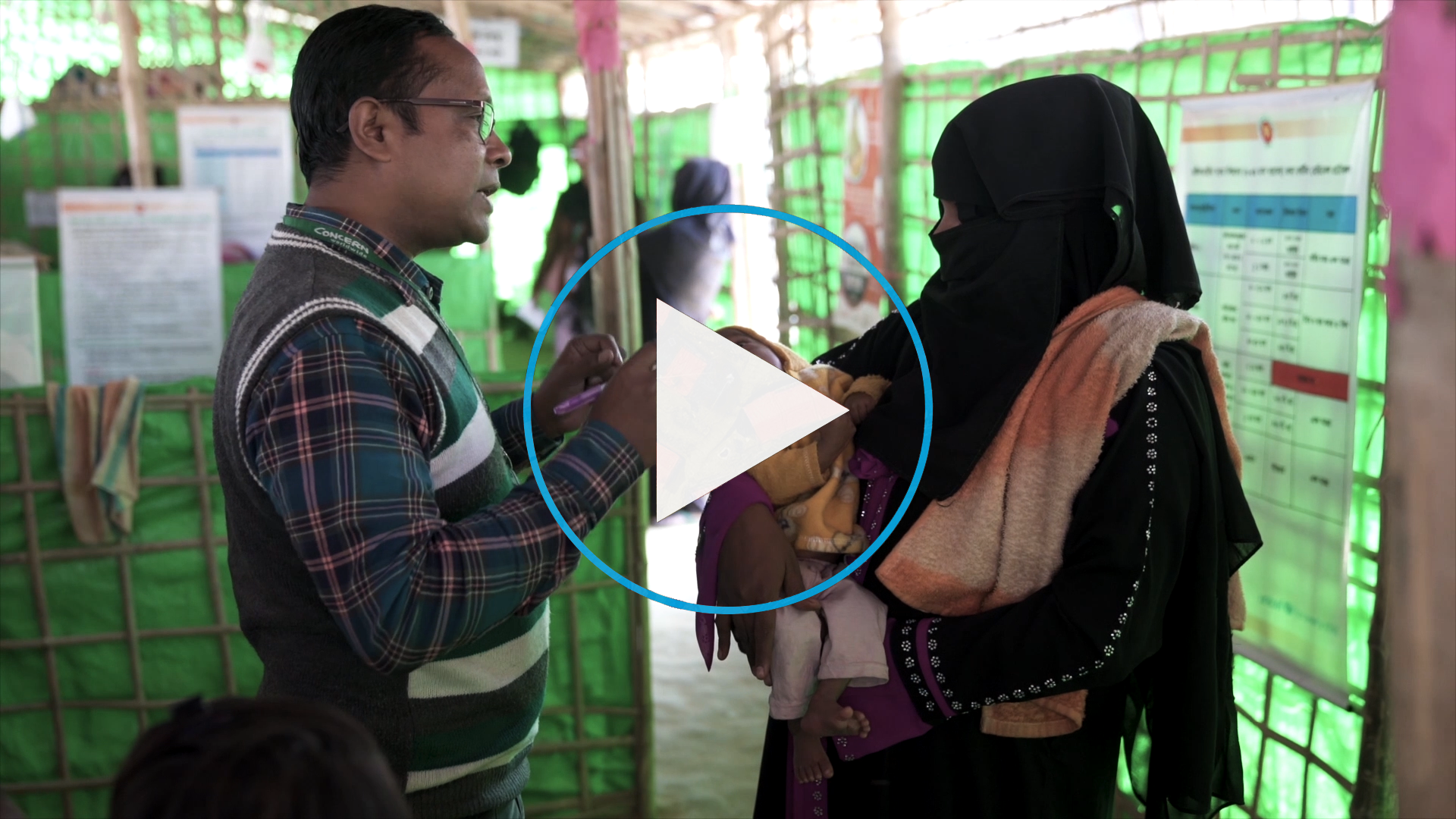 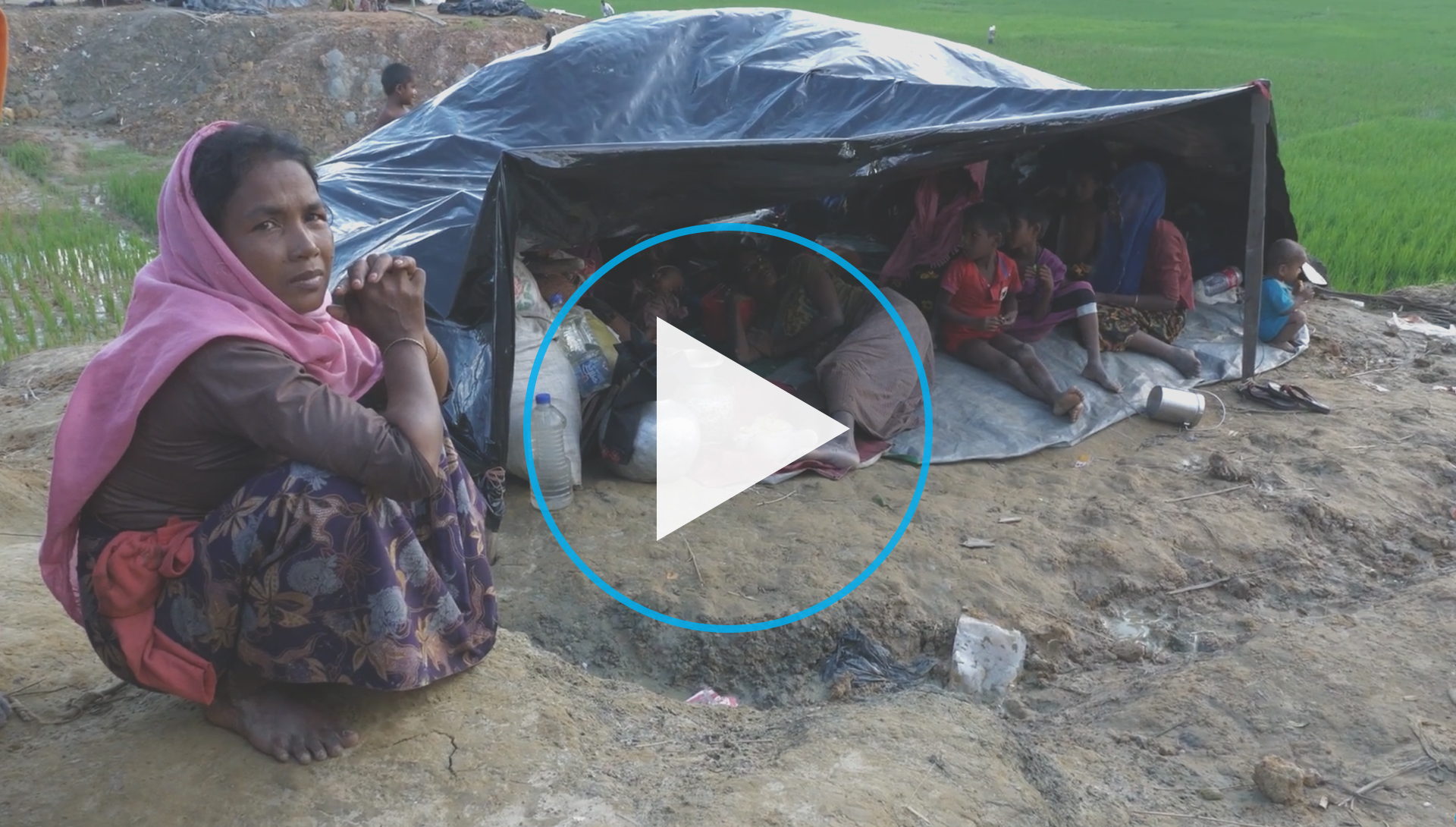 Click to watch Rohingya's New Threat!
UNICEF is working hard to provide Rohingya refugee children with clean water and protect them from disease. Watch Jean-Jacques Simon, UNICEF Bangladesh, explain how “Water is at the center of this humanitarian crisis.”
Read the Full Story

"Houses were burning. There were rocket launchers. They were killing people after arresting them, that’s why we fled here.” —Umme, 12

No child should have to tell this story, but it’s an all-too-familiar one in the Bangladesh refugee settlements, where UNICEF is helping Rohingya survivors of what former United Nations Human Rights chief Zeid Ra’ad Al Hussein called “a textbook example of ethnic cleansing.”

The Rohingya are a Muslim minority community that has lived for centuries in Myanmar, where they have long suffered persecution. In August 2017, after they became the targets of a military-led campaign of brutal violence, over 910,000 Rohingya fled Myanmar’s Rakhine state into Bangladesh, joining nearly 300,000 people who fled Myanmar in a previous exodus. They settled in Cox’s Bazar, where hills were quickly cleared of trees and vegetation to accommodate the massive influx of traumatized families and children.

The deforestation made room for the hastily erected shelters where the Rohingya now live. But it also created conditions that are ripe for disaster during monsoon season when the torrential downpours, winds, flooding and landslides take their toll on the infrastructure that UNICEF and partners have built to support families struggling to eke out an existence.

During 2019's monsoon season, some 750 UNICEF-supported learning centers were impacted, putting 60,000 children’s education on hold. Torrential rainfall wholly submerged at least one playground, and families struggled to remove the mud that landslides sent pouring into their homes. Water and sanitation facilities, including 600 latrines, were damaged, increasing the risk of dangerous waterborne diseases.

Conditions are particularly harsh during monsoon season. But even under the "best" conditions, Cox's Bazar is no place for a child. That doesn't stop UNICEF from doing everything in its power to keep children safe and healthy.

Since the crisis began, UNICEF has worked with the Bangladesh government, delivering lifesaving humanitarian relief to Rohingya children as well as those affected who live in Bangladeshi host communities. In 2019, that support included:

UNICEF needs your support to continue that critical work in 2020 to help the more than 500,000 children who need humanitarian aid.  Please lend your support so children who have already suffered unimaginable horror can have what they need to stay healthy, safe and hopeful about better days ahead.

In Bangladesh, Rohingya Refugees Celebrate Ramadan
Despite the threat of the novel coronavirus, ethnic Muslim Rohingya refugees will spend their holy month fasting and praying.

Youth Clubs Help Rohingya Children Cope With Problems in Refugee Camps
UNICEF-supported clubs give adolescents a forum to discuss personal safety, early marriage and the dangers of drugs and trafficking.

After Two Years in Limbo, Rohingya Children Crave the Chance To Learn
The youngest victims of Myanmar's ethnic cleansing campaign are missing out on what only education can offer: a chance for a brighter future

A Youth Job Skills Program Is Building Futures in Bangladesh
Young Rohingya refugees and members of the host community in Bangladesh are learning valuable life skills to lift them out of poverty.

Heavy Monsoon Rains Drench Rohingya Refugee Camps in Bangladesh
Thousands of children and families are at risk from flooding and landslides. UNICEF is on the ground providing urgently needed assistance.