In Mozambique, 90,000 Kids Need Help in Wake of Cyclone Eloise

UNICEF emergency response teams are on the ground in Sofala province, where an estimated 170,000 people have been severely affected by the tropical superstorm. The worst of the winds are over, but flooding remains a major threat in the days to come. 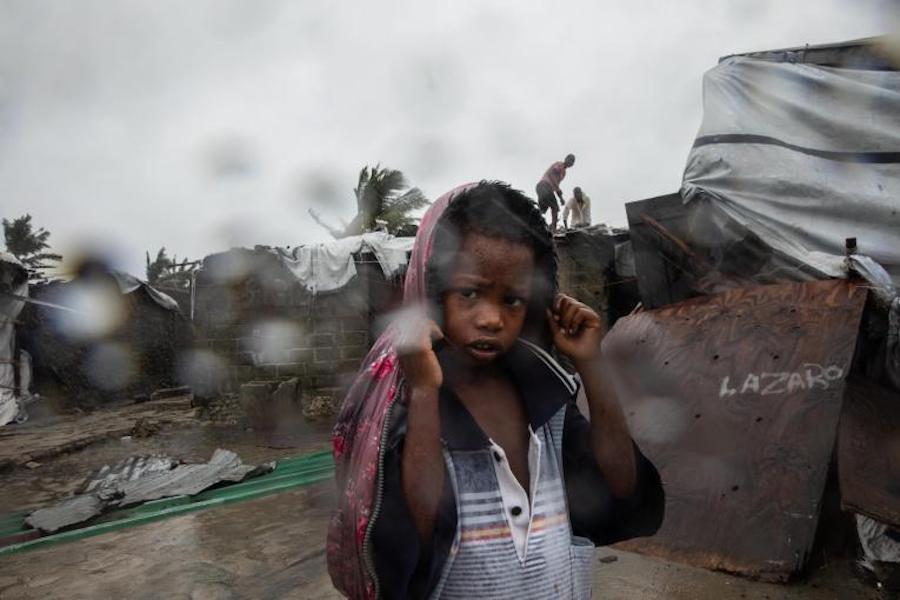 Cyclone Eloise made landfall on Jan. 23, causing severe flooding and threatening a population still recovering from Cyclone Idai, which hit the same region in March 2019, displacing tens of thousands of families, and causing widespread food insecurity and higher rates of child malnutrition. UNICEF is working with partners to meet urgent needs and protect against cholera and other waterborne diseases. 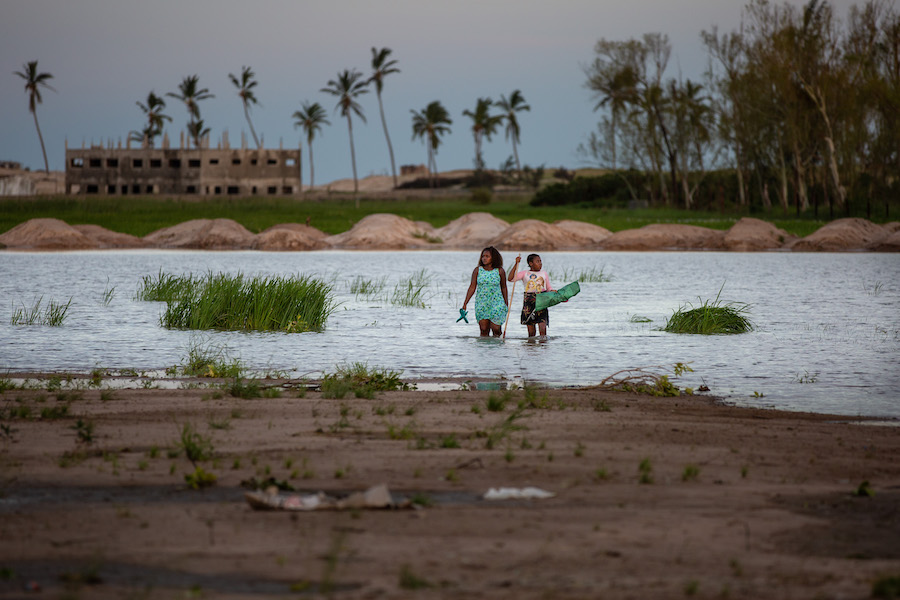 According to initial reports, thousands of homes have been wiped out and some 8,400 people have been displaced. At least 26 health centers and 85 classrooms have also been destroyed and about 350,000 acres of farmland are underwater. Above, a woman and child wade through a flooded area next to the Tica Relocation Center, some 50 miles outside the city of Beira where families have come seeking shelter and aid. Many arrived having lost everything. 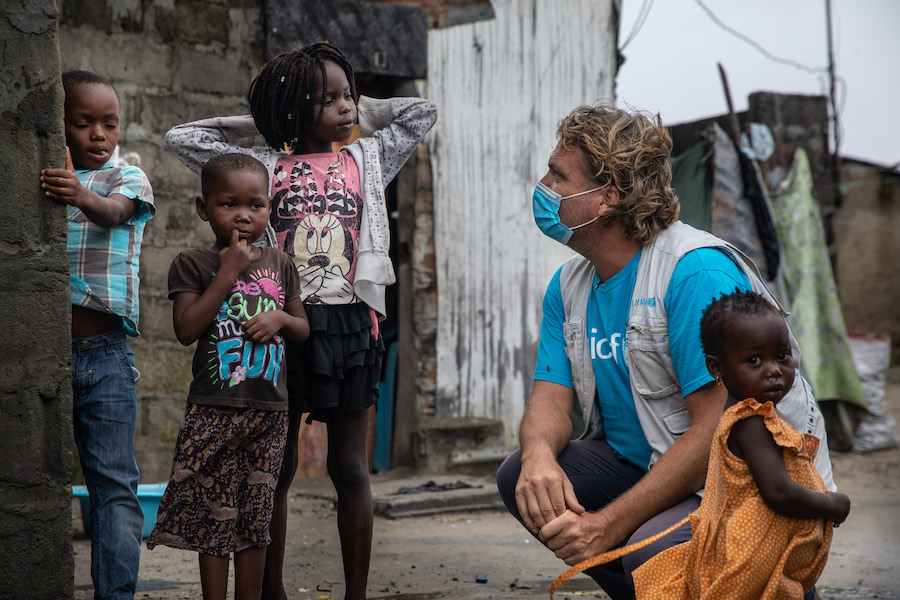 In a video shot from the streets of the port city Beira, Daniel Timme, who leads communications for UNICEF Mozambique, points out how high-speed winds and torrential rains disproportionately affect the city's poorer neighborhoods, where dwellings are largely fashioned out of corrugated metal and tarps. "It's heartbreaking," Timme said. "This is low ground, close to the sea, and it's very dangerous... We have to think of the population here and help them as much as we can." Above, Timme visits with children in the Beira neighborhood of Praia Nova, where families are particularly vulnerable.

Over 600 people displaced by Cyclone Eloise — including Joana Babasse, pictured above, center, and her children, Amilia, 7, left, and Anguista, 4 — took shelter at the Samora Machel school in Beira, where they are sleeping in classrooms, and where UNICEF and partners are bringing food and medicine. With many people still recovering from the losses and trauma caused by Idai, psychosocial support will be another critical component of the Eloise response. 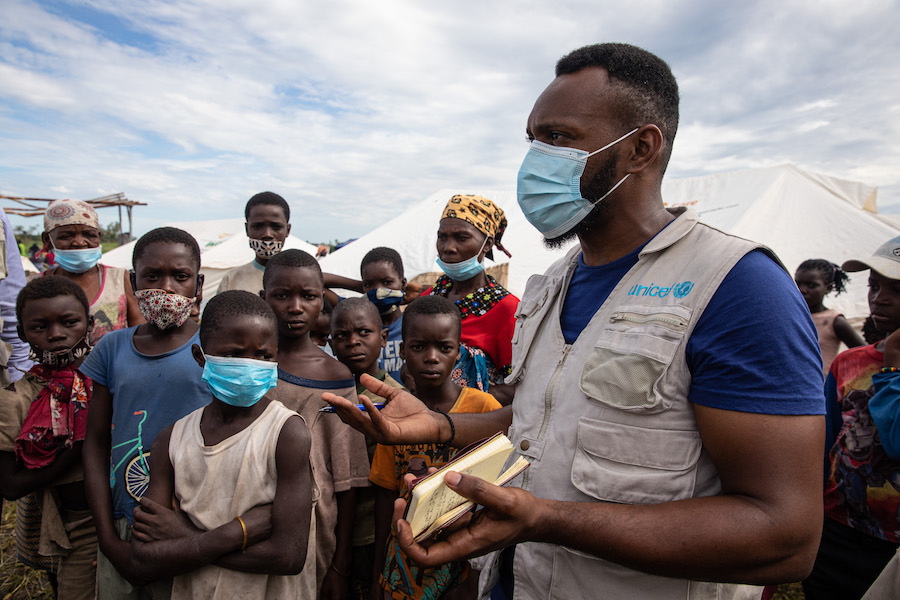 Above, Francelino Murela — a Communication for Development (C4D) Officer with UNICEF Mozambique who specializes in adolescent development — conducts a needs assessment at the Tica Relocation Center in Sofala province on Jan. 24. A top UNICEF priority is to keep kids safe from exploitation and abuse and other threats that can increase in the aftermath of a disaster like this. “I am a father of two kids, and it hurts me to see other children in situations of vulnerability,” Murela said. 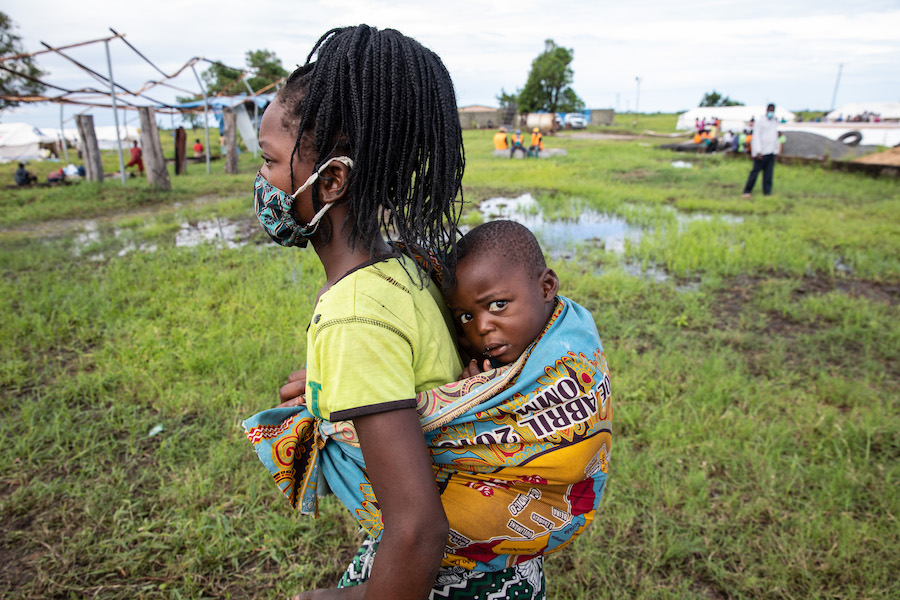 Above, a mother and baby at the Tica center, supported by UNICEF. “Less than two years ago, I saw firsthand the devastating consequences of Cyclone Idai on children and families in central Mozambique – consequences which continue to this day,” UNICEF Executive Director Henrietta Fore said. “This latest storm is a stark reminder that children are bearing the brunt of climate-related severe weather events. We need to take climate action seriously and invest in measures to strengthen the resilience of vulnerable communities.”

Every year, UNICEF responds to hundreds of emergencies in dozens of countries around the world. Support UNICEF's humanitarian relief efforts.

Top photo: Displaced children and families queue for food at a relief distribution point outside the port city of Beira, Sofala province, Mozambique, where Cyclone Eloise made landfall on Jan. 23 — devastating neighborhoods, flooding farmland and damaging critical infrastructure. Over 170,000 people, including 90,000 children, are in urgent need of assistance. © UNICEF/UN0407002/Franco