UNICEF Supporter Heidi Klum is a world-famous super model, television host, businesswoman, fashion designer, television producer and actress. Heidi has been a co-host of Project Runway for 14 seasons and earned an Emmy Award in 2013 for her work on the show. Currently, Heidi is a judge on the NBC reality show America's Got Talent.

Since her appointment as a UNICEF Supporter in 2011, Heidi has generously donated her time and star power in many different ways to spotlight UNICEF's lifesaving work for children around the world.

"Recently, I took an extraordinary trip to Varanasi, India, where I witnessed UNICEF’s lifesaving work — from treating underweight and premature babies to teaching school children about the importance of hand washing. I'm humbled to be part of an amazing organization like UNICEF," said Heidi.

During her trip, she visited a UNICEF-supported, child-friendly school space where she met with girls who are also young community leaders. The girls hosted Heidi as she observed UNICEF water, sanitation, and hygiene (WASH) programs being taught in their school.

Heidi also visited a sick newborn care unit, a nutrition rehabilitation center, and a health clinic for children, where she helped weigh a baby and administer polio immunization drops.

Finally, Heidi met with a group of adolescent girls, peer educators and mothers involved with a UNICEF-supported initiative to empower Indian women and girls to combat gender-based violence, address reproductive health, break the culture of silence about menstrual hygiene and increase access to the justice system.

Join the Guardian Circle to deliver lifesaving aid to every child, whenever and wherever they need help. 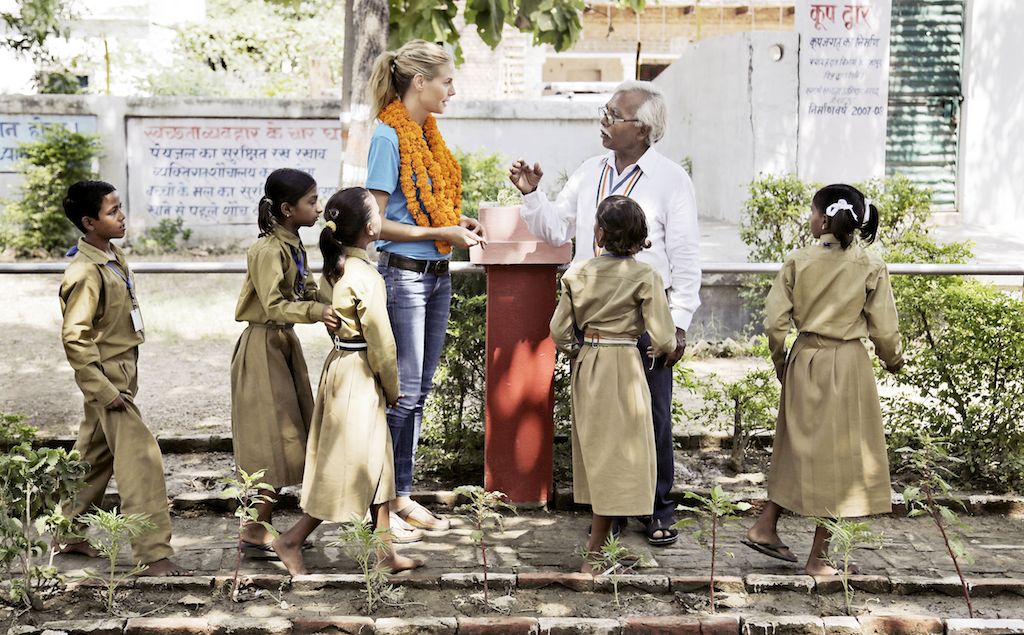 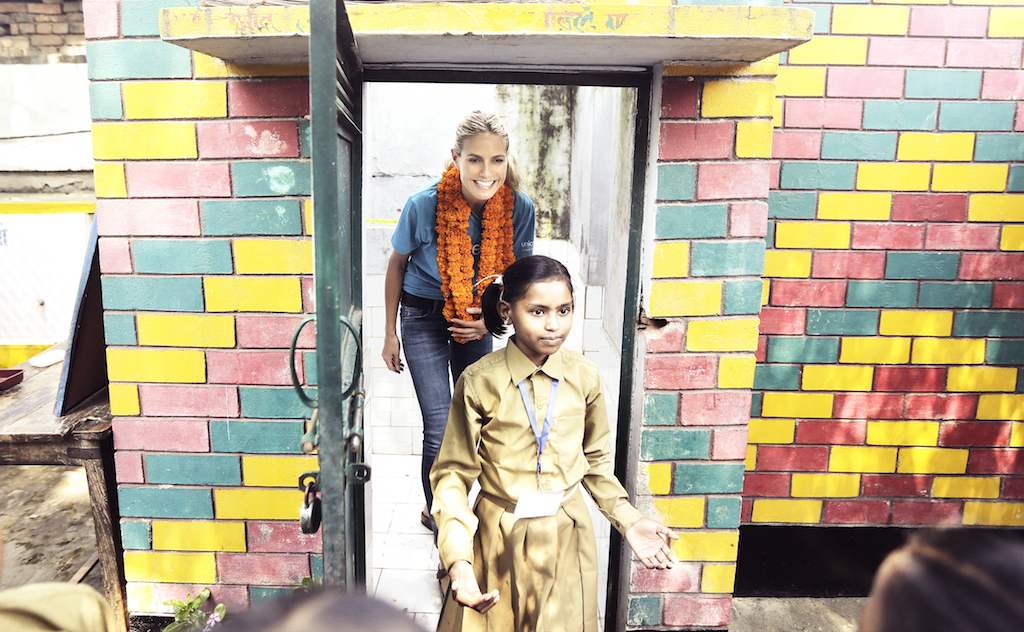 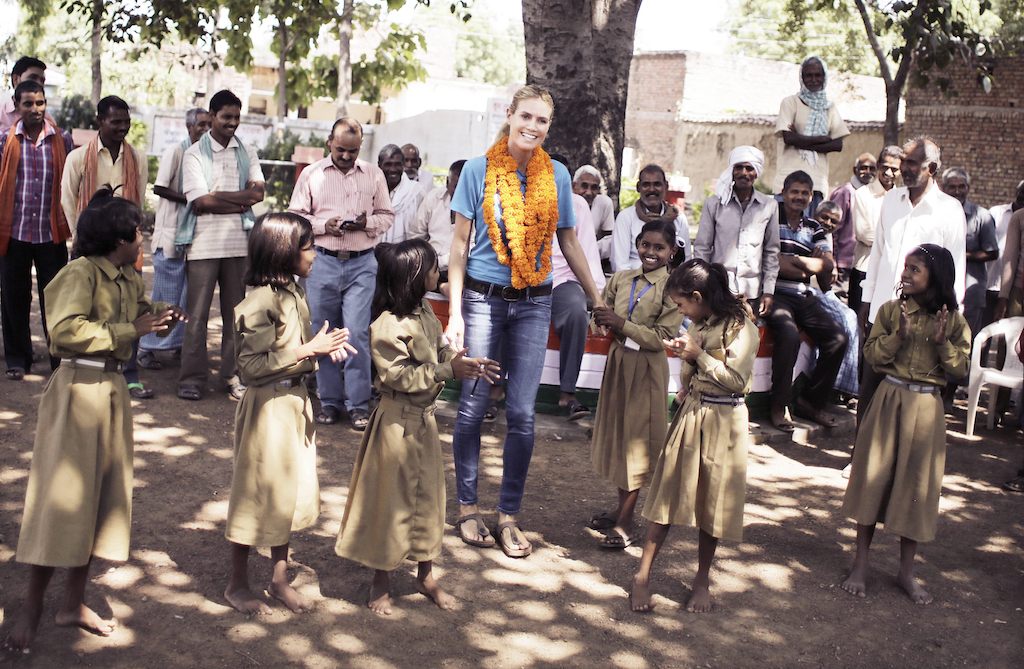 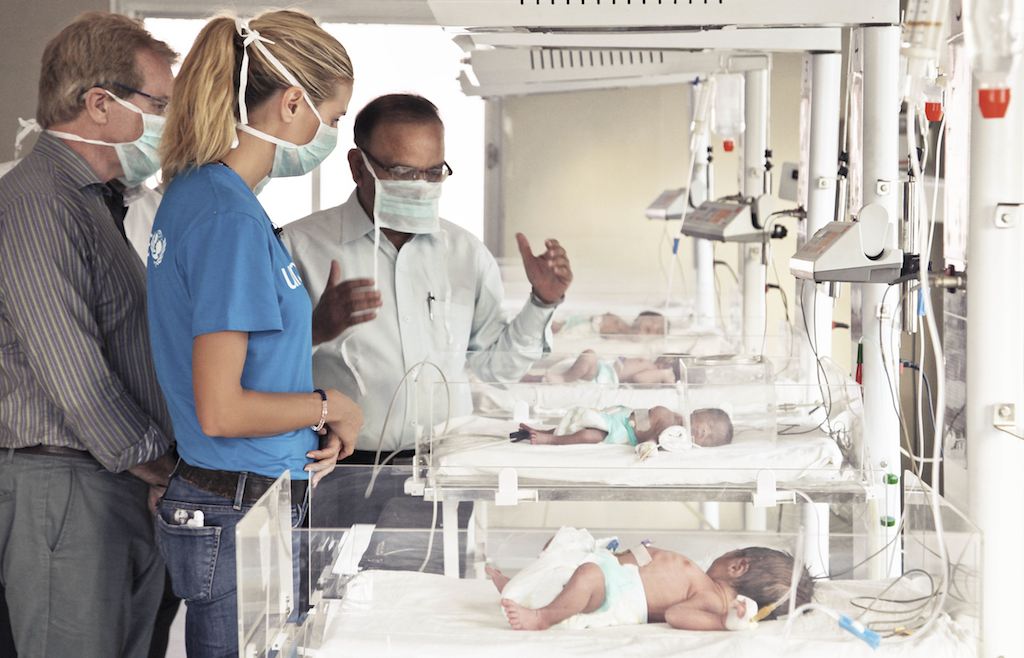 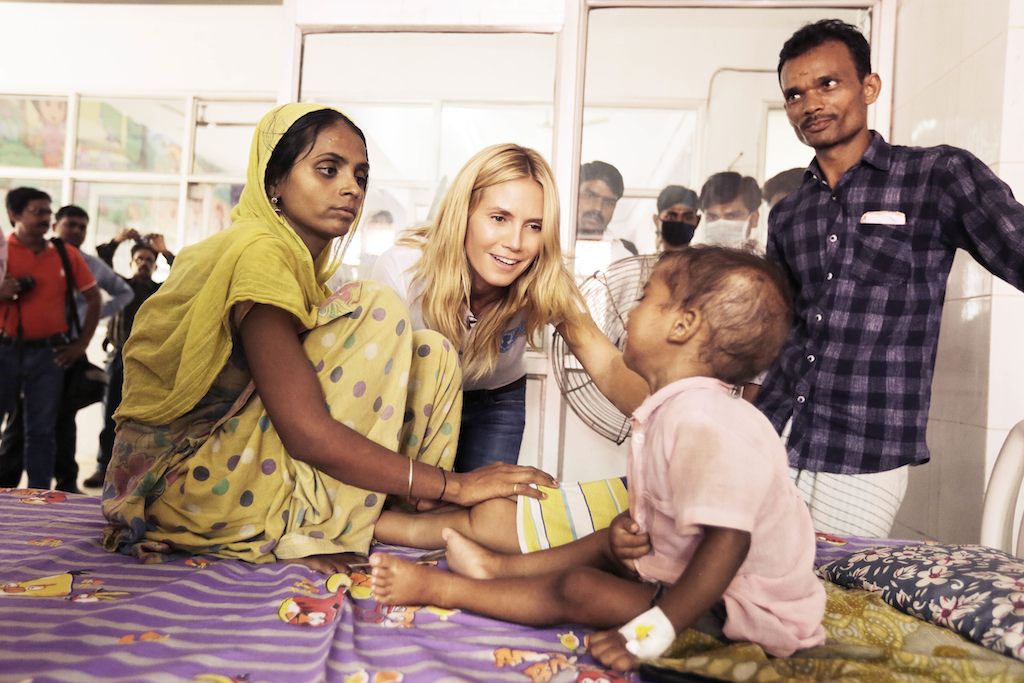 Heidi participated in the 2013 UNICEF Tap Project, along with other celebrities, to raise awareness and fundraise by using social media to help provide clean water to children.

In October 2012, Heidi traveled to Haiti with UNICEF, braving Tropical Storm Sandy as it made landfall there. While in Haiti, Heidi visited a number of UNICEF-supported programs helping children recover from the devastating 2010 Haiti earthquake, including a health clinic where mothers and children also receive special fortified food to fight malnutrition, the neonatal unit of a Port-au-Prince hospital and a UNICEF child-friendly space where kids can receive psychosocial support. 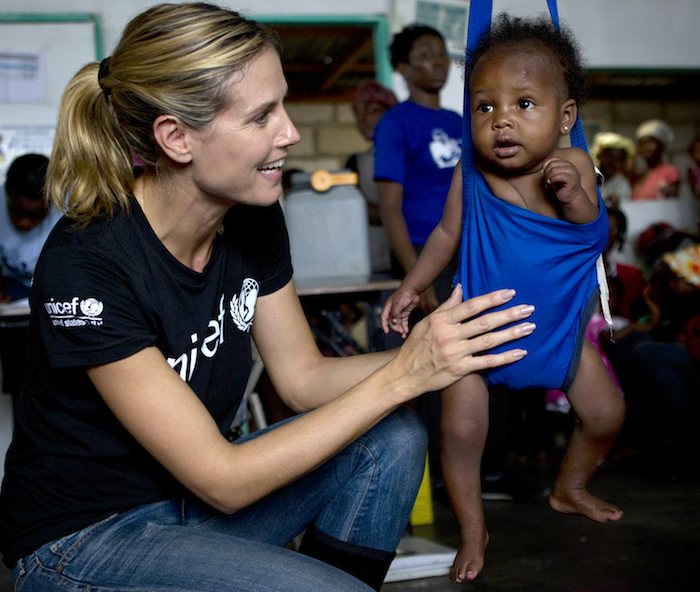 UNICEF Supporter Heidi Klum visits a UNICEF health clinic in Haiti and weighs a baby to help protect him from malnutrition. ©UNICEF/2012

Heidi attended the second annual UNICEF "Playlist with the A-List" event in March 2012, where she led the audience, including Tom Hanks and Rita Wilson, in a sing-a-long rendition of the disco favorite “Y.M.C.A”.  The event benefited UNICEF’s Schools for Africa initiative.

In addition, Heidi utilized her social media networks to promote the Trick-or-Treat for UNICEF campaign to her dedicated Facebook fans and Twitter followers, including publicizing UNICEF’s “Children Are Always in Fashion” exhibition at Mercedes-Benz Fashion Week that year.

Through social media support, Heidi helped raise awareness and enhance fundraising for UNICEF’s emergency relief efforts during humanitarian crises in Syria, the Philippines, the Sahel and the Horn of Africa.