As Floodwaters Recede, Grave Risks Remain for Children in Pakistan

Four months since Pakistan declared a national state of emergency due to catastrophic flooding during the 2022 monsoons, up to 4 million children are still living near contaminated and stagnant floodwaters — at grave risk to their survival and well-being.

“Children living in Pakistan’s flood-affected areas have been pushed to the brink,” said Abdullah Fadil, UNICEF Representative in Pakistan. “The rains may have ended, but the crisis for children has not."

Millions of young lives still at risk in Pakistan

An estimated 10 million girls and boys continue to need urgent, life-sustaining support. Scores of villages and crops remain underwater, and now bitter winter temperatures are setting in — endangering those who are still without adequate shelter.

Ahead of the start of winter, UNICEF began distributing warm clothing, blankets and other items, aiming to reach nearly 200,000 children, women and men. Acute respiratory infections in particular — a leading cause of child deaths worldwide — have skyrocketed in flood-stricken areas.

Cases of severe acute malnutrition nearly doubled in some parts of the country between July and December 2022 compared to the same period the previous year; an estimated 1.5 million children are still in need of lifesaving nutrition interventions. Risks of malaria, diarrhea, dengue fever, typhoid and painful skin diseases also remain high.

UNICEF is reaching flood-impacted children and families with safe water, health care, nutrition, education and other assistance — but more support is needed

The 2022 'super floods' claimed 1,700 lives and created 'apocalyptic' devastation across an area the size of Switzerland, as Pakistan Prime Minister Muhammad Shehbaz Sharif noted in this op-ed. The culprit: a monsoon season "on steriods," as UN Secretary General António Guterres put it.

The torrential rains began in June 2022. By late August rainfall had reached three times the 30-year average. At least 33 million people were impacted, substantially more than during the country's last major flood catastrophe in 2010-2011.

Thousands of homes were damaged or destroyed, along with hundreds of water systems, 8,700 miles of roads, 1,500 public health facilities and 27,000 schools.

UNICEF response teams have been on the ground since the beginning, working with partners in all four of Pakistan’s provinces — Balochistan, Khyber Pakhtunkwa, Punjab and Sindh — delivering emergency assistance to meet the urgent needs of affected children and families. 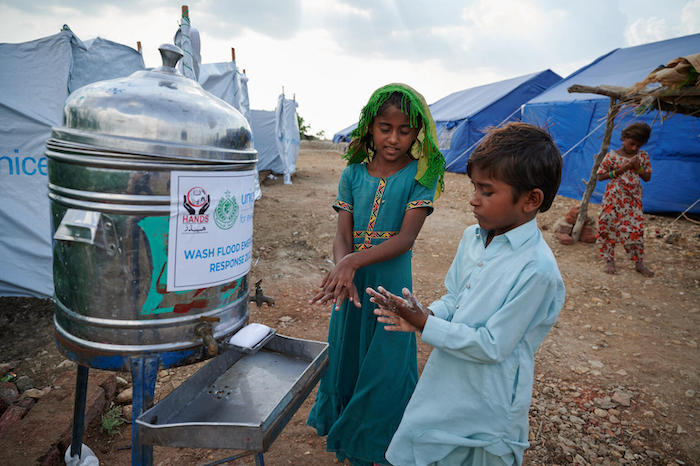 At a UNICEF-supported camp for families displaced by the floods in Sindh Province's Umerkot District, 8-year-old Geetu shows her brother how to properly wash hands with soap. UNICEF is leading efforts to improve access to safe water, sanitation and hygiene (WASH) as part of the ongoing emergency response in Pakistan. © UNICEF/UN0708459/Noorani

At the start of the crisis, UNICEF rushed $1 million supplies that had been pre-positioned and then an additional $3 million of supplies soon thereafter to the worst-affected areas. In the months since, UNICEF has continued to increase humanitarian relief efforts in water, sanitation and hygiene (WASH) as well as nutrition, child protection and education.

The impact of these efforts so far include: 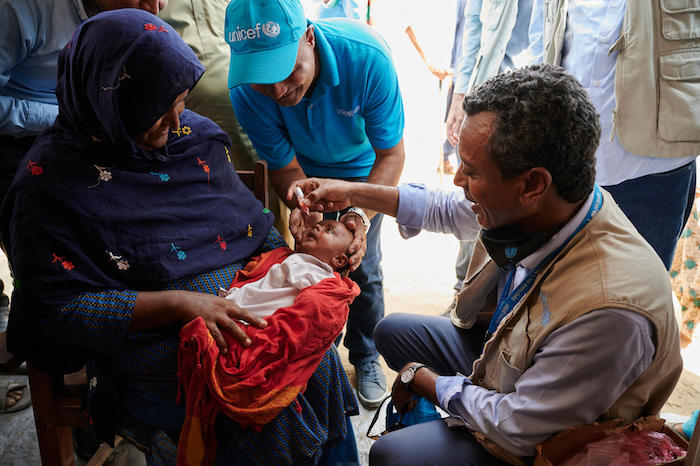 UNICEF continues to work with the government of Pakistan, other UN agencies and NGO partners to respond to the needs of the most vulnerable populations in 55 calamity-affected districts — those who remain displaced and those returning to the location of their destroyed villages.

“As families begin to return to their villages, our response has moved with them,” Fadil said.

With more than 2 million homes damaged or destroyed by the 2022 floods, an estimated 5.4 million people remain displaced.

“Just last year, my father had sold some land, and with that money, we built our new house,” says 10-year-old Muhammad. “I also helped my father in its construction. These floods washed away our new house right in front of our eyes. We were able to evacuate in time, and from the highway, we saw our house drown in the water.” A family makes do with a tent for shelter in a flood-devastated village in Basti Kishani Rajanpur District, Punjab Province, Pakistan. © UNICEF/UN0705957/Noorani

“At the camp, I am helping my family survive,” Muhammad says. “My father is responsible for arranging food while I am tasked with finding firewood so that my mother can cook. I often have to travel far to get firewood, and sometimes when I'm back, my mother still doesn't cook because my father has been unable to arrange any food.”

Muhammad is one of the millions of children who remain exposed to or are living near floodwaters. Many families continue to live in makeshift tents next to contaminated water — without access to safe drinking water and exposed to disease-carrying mosquitoes.

In addition to addressing the physical repercussions of the Pakistan floods, UNICEF is also helping children recover from the trauma of having experienced devastating loss.

“I remember I was having my breakfast when I heard my neighbor scream that the water was here,” said 16-year-old Abdur, who lost his home in the village of Malik Chowdagi and is also staying at the Thari Mirwah camp.

“My father went out and came back running immediately asking us to get ready to leave,” Abdur continued. “I was going to our backyard to untie my cows, but my father pulled me away as there was no time. We managed to make it to the highway just in time. I lost so many things in the flood; my house, my bike and my clothes, but if I could just bring one thing to this camp, it would have been Bholi, my 3-month-old calf. She was so cute and I really miss feeding and playing with her.”

The totality of the destruction has left children traumatized and severed from their former lives — including their ability to attend school — further compounding the effects of COVID-19 pandemic-related closures — and not just in terms of learning loss. Out-of-school children generally face greater nutrition, health and protection risks.

With this in mind, UNICEF is using its temporary learning centers to help children continue with their education and to receive mental health and psychosocial support as well.

At the learning center at the Mohenjodaro Camp in Sindh Province’s Larkana District, 17-year-old Kulsoom describes her family's devastating loss.

“I used to live in my ancestral home, which was built by my great-grandfather,” she said. "Our teacher asked us to draw, so I drew my house and showed it to my new friends. Generations of my family had lived there, but the floodwater didn't spare it. I'm hopeful that one day we will be able to go back to our village and rebuild it.” At a UNICEF temporary learning center near Moenjodaro in Sindh Province’s Larkana District, 17-year-old Kulsoom shows a drawing of her family's home. Built by her great-grandfather, the house was destroyed by the super floods of 2022. "I'm hopeful that one day we will be able to go back to our village and rebuild it,” she said. © UNICEF/UN0706923/Butt

Pakistan’s floods a sign of more climate disasters to come

It will take months, if not years, for families in Pakistan to recover from the 2022 super floods — which scientists have linked to climate change and cite as an ominous sign of more climate-induced emergencies to come.

In 2022 alone, over 15 million children required critical assistance due to extreme, climate-related flooding — in Pakistan as well as Bangladesh, northern India and Afghanistan. There are other concerns: more and more heat waves are hitting crowded cities, glaciers continue to melt in Pakistan and Bhutan, landslides have swept away homes in Nepal.

On Jan. 9, at the International Conference on a Climate Resilient Pakistan in Geneva hosted by Prime Minister Sharif and Secretary-General Guterres, the international community pledged over $9 billion to help Pakistan recover and rebuild. Commitments were made as leaders acknowledged the disproportionate impacts of climate catastrophes on already vulnerable children and families — those who are the least accountable for climate change in the first place, and yet are suffering the most.

"[W]e need to be honest about the brutal injustice of loss and damage suffered by developing countries because of climate change," Guterres said. "If there is any doubt about loss and damage — go to Pakistan."

UNICEF: A history of supporting vulnerable children in Pakistan

UNICEF's ongoing response to the flooding emergency and its aftermath is a continuation of a decades-long mission providing a range of humanitarian support to the children and families of Pakistan, in partnership with the government.

UNICEF remains committed to accelerating children’s progress pursuant to the Sustainable Development Goals (SDGs), and helping children realize their rights under the Convention on the Rights of the Child.

Over 30 years ago, Pakistan became the sixth country in the world to sign and ratify these rights, a few months after they were adopted by the United Nations General Assembly. Yet conditions for many children and adolescents in Pakistan remain critical. UNICEF focuses on helping to improve children's health, including immunization (particularly against polio, as Pakistan remains one of the last two endemic countries); nutrition; education; access to safe water and sanitation; and protection from violence and exploitation, which includes registering children at birth.

In addition to UNICEF's permanent field offices in all four provinces, four new hubs have been established to bring UNICEF operations and programs closer to the areas that were hardest hit by flooding. In the months ahead, UNICEF will continue to respond to urgent humanitarian needs, while also restoring and rehabilitating critical social services and infrastructure for families returning home.

"We know the climate crisis played a central role in supercharging the cascading calamities evident in Pakistan. We must do everything within our power to ensure girls and boys in Pakistan are able to fully recover from the current disaster, and to protect and safeguard them from the next one.”

You can help children in Pakistan who need urgent aid now. UNICEF’s ongoing appeal for the country is significantly underfunded. Your 100% tax-deductible contribution will help give them the lifesaving support they need to rebuild their lives since floods devastated their country. Donate today.

Top photo: At Pakistan’s Imamia IDP Camp, in the Sindh Province’s Dadu District, the grandmother of 3-year-old Pumi gives her Ready-to-Use Therapeutic Food (RUTF), a lifesaving treatment for severe acute malnutrition supplied by UNICEF. The risks of SAM have sharply risen in the aftermath of catastrophic flooding. © UNICEF/UN0742512/Zaidi