What Is Ready-to-Use Therapeutic Food?

UNICEF is the global leader in RUTF procurement, purchasing and distributing almost 80 percent of the world's supply of the nutrient-rich, peanut-based paste that saves lives.

The day Prosper rushed his 3-year-old son, Pierre, to the nearest health center, he wondered if he would survive.

Pierre weighed just under 20 pounds and he had severe diarrhea. During the 7-mile walk from their village to the capital of the Central African Republic, Prosper prayed: "I wondered if God's plan was to take him back."

Pierre's mother had died shortly after he was born. With no job in a country ripped apart by conflict, Prosper was struggling to provide for his family, collecting corn from the dwindling supplies at a nearby farm. As Pierre’s weight steadily dropped and he grew sicker, refusing to eat, Prosper looked to traditional medicine to help his son, thinking he couldn't afford hospital care. 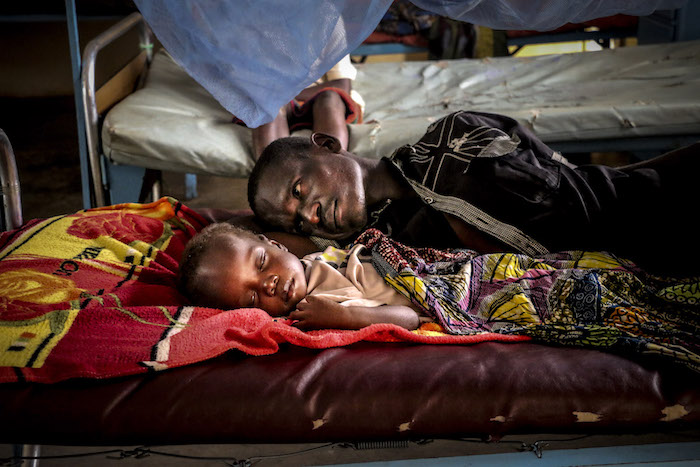 Three-year-old Pierre was emaciated when his father, Prosper, brought him to a UNICEF-supported health center in the Central African Republic. After emergency treatment to get him stabilized, he was treated with Ready-to-Use Therapeutic Food (RUTF) and recovered. © UNICEF/UN0248772/Le Du

The situation is all too common in CAR and in many other countries and across regions where UNICEF works. Severe drought, armed conflict, the effects of the COVID-19 pandemic and other crises have resulted in soaring rates of child malnutrition around the world.

Children who suffer from severe acute malnutrition (SAM) — also known as wasting disease, the most extreme and visible form of undernutrition — can be fatal if untreated. Those who survive often suffer long-term effects.

UNICEF and partners use Ready-to-Use Therapeutic Food (RUTF), a nutrient-packed peanut paste, to treat children with SAM. As the global leader in RUTF procurement, UNICEF purchases and distributes nearly 80 percent of the world's supply — reaching millions of children in dozens of countries every year.

RUTF doesn't require refrigeration. It requires no mixing with potentially contaminated water, and stays fresh for up to two years.

Each RUTF packet comes ready to use and is easy for a parent or other caregiver to administer, no training required. One carton of Ready-to-Use Therapeutic Food contains 150 packets, enough for one six- to eight-week course of treatment to restore the health of a severely malnourished child.

After 10 days at Bangui Pediatric Hospital, Pierre was able to return home. After a month in the outpatient feeding program, where he remained on a regimen of RUTF, he was smiling and laughing again.

When 10-month-old Younas was brought to a UNICEF-supported clinic in South Punjab, Pakistan, by his mother, he was weak and losing weight each day. Instead of learning to crawl or take his first steps, he mostly cried and slept. His mother told health workers that she was breastfeeding Younas and giving him buffalo milk, but he kept getting diarrhea.

Ten-month-old Younas holds a Ready-to-Use Therapeutic Food (RUTF) packet. He was diagnosed with severe acute malnutrition, but now he is healthier, thanks to RUTF and counseling his mother received from the local health unit's outpatient treatment. © UNICEF/UN025832/Malik

The diagnosis was quick and effective. Younas was suffering from SAM, a major health issue for both children and their mothers in rural Pakistan.

After seven weeks on a diet of therapeutic food, Younas began to recover. And thanks to the health and nutrition training his mother received at the clinic, she knew what he needed to continue growing healthy and strong.

Malnutrition is a silent threat to millions of children. The damage it does can be irreversible, robbing children of their mental and physical potential.

In addition to providing the lifesaving treatment for children with SAM, UNICEF also provides counseling to caregivers on best feeding practices for infants and young children and works with partners to improve access to safe water and primary health care services.

"Malnutrition is a silent threat to millions of children," said UNICEF Director of Emergency Programs Manuel Fontaine. "The damage it does can be irreversible, robbing children of their mental and physical potential. In its worst form, severe malnutrition can be deadly."

Child malnutrition fueled by impacts of COVID-19, climate change and war in Ukraine

The socio-economic impacts of the COVID-19 pandemic have made an existing child malnutrition crisis worse by increasing household poverty and food insecurity and disrupting essential nutrition services in already vulnerable communities. The ripple effects of the war in Ukraine on global supply chains have further contributed to rising food and fuel prices. Years of severe drought in the Horn of Africa — the region's worst climate-induced emergency in 40 years — is endangering millions of young lives.

UNICEF estimates that 8 million children under age 5 in 15 countries are at risk of death from severe wasting unless they receive immediate therapeutic food and care, and has issued an urgent appeal for support to accelerate its response.

UNICEF has long worked with manufacturers of RUTF to increase the product's ready availability and to keep prices down. In May 2022, however, UNICEF flagged that the price of Ready-to-Use Therapeutic Food was projected to increase by up to 16 percent over the next six months due to a sharp rise in the cost of raw ingredients — potentially leaving up to 600,000 additional children without access to lifesaving treatment at current spending levels. Shipping and delivery costs were also expected to remain high.

“For millions of children every year, these sachets of therapeutic paste are the difference between life and death," UNICEF Executive Director Catherine Russell said. "A 16 percent increase may sound manageable in the context of global food markets, but at the end of that supply chain is a desperately malnourished child, for whom the stakes are not manageable at all."

Top photo: In the Central African Republic, a mother holds her child, who is being treated for severe acute malnutrition with Ready-to-Use Therapeutic Food (RUTF),  an energy-dense, micronutrient-enriched paste made of peanuts, oil, sugar and milk powder. © UNICEF