The Convention on the Rights of the Child: Still Critical 30+ Years On

2019 marked the 30th anniversary of the Convention on the Rights of the Child — an international treaty affirming the world's commitment to protecting kids' rights to survive and thrive. How the CRC continues to be a guiding force behind UNICEF's mission — and upholding its principles ever more urgent.

In an open letter to the world's children — published in 2019 to coincide with the 30th anniversary of the Convention on the Rights of the Child — then UNICEF Executive Director Henrietta Fore explained why she was both worried and hopeful about the next generation.

At the top of the list of major concerns: pollution and the climate crisis. A decline in mental health. Mass migration and statelessness. Threats to privacy. Online misinformation.

Another grave threat, Fore wrote, is that one in four children today are living, and learning, in disaster zones and areas embroiled in conflict.

"[T]he children of today are facing a new set of challenges and global shifts that were unimaginable to your parents,” Fore wrote. “Our climate is changing beyond recognition. Inequality is deepening. Technology is transforming how we perceive the world. And more families are migrating than ever before. Childhood has changed, and we need to change our approaches along with it.”

Childhood has changed, and we need to change our approaches along with it.”

Fore's letter recognized that children and young people had already started creating movements across the world in search of solutions to overcome the challenges they — and their peers — face, calling for world leaders to follow their lead.

“Children and young people of today are taking the lead on demanding urgent action, and empowering yourselves to learn about, and shape the world around you,” Fore wrote. “You are taking a stand now, and we are listening... We want to work together with you to find the solutions you need to tackle the challenges of today, to build better futures for yourselves and the world you will inherit."

Fore’s letter served as both a warning about persistent and emerging threats to children’s rights, and an outline for how to address them. Children perform at a UNICEF-supported school in Baghdad. © UNICEF/UN0154655/Jeelo

For UNICEF, the CRC remains a guiding force. A brief history:

Sometime back in the late 1970s, a consensus emerged among world leaders that children had the same human rights — the same civil, cultural, economic, political and social rights — as everybody else.

To codify these rights, a movement emerged to create a binding set of standards and an international ethical and legal framework to ensure that children's basic needs would be met and that they would reach their full potential.

It took 10 years to negotiate the Convention on the Rights of the Child (CRC). The 54-article treaty, which defines a child as any person under age 18, was adopted by the UN General Assembly on Nov. 20, 1989, and subsequently ratified by 196 countries.

Today, the CRC serves as a point of reference against which progress for children can be measured. It is a lens through which conditions and situations affecting children can be assessed to ensure the most effective response. 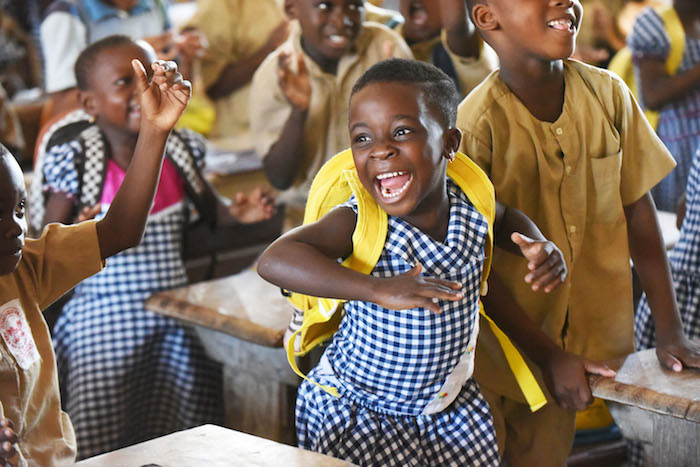 Students get excited during a classroom activity at a UNICEF-supported school in Gonzagueville, in southern Côte d’Ivoire. © UNICEF/UN0207885/Dejongh

The many ways in which UNICEF works with partners to advance child rights includes improving access to proper health care, nutrition, clean water and education, and working with local governments to strengthen laws, policies and social support systems to prevent exploitation, violence and abuse, among other strategies.

Making sure children know their rights — and working to ensure these rights are upheld — factors into everything UNICEF does, including efforts to end child marriage, child labor, child trafficking and the forced recruitment of child soldiers. It is the driving force behind UNICEF's efforts to get children back to school and to keep them there and on track to a better future.

Top photo: UNICEF's efforts to ensure children's rights — including the right to good health — includes working with partners to eradicate vaccine-preventable disease. A boy beams after receiving his polio drops during a national immunization campaign in Afghanistan in March 2018. © UNICEF/UN0202777/Hibbert