Catastrophic conditions created by a climate-induced drought, environmental degradation, a distant war and other factors are now threatening the lives of over 20 million children in Ethiopia, Kenya and Somalia, according to UNICEF  — more than double the number of children reported just five months ago.

Levels of malnutrition are soaring among children, with 1.5 million children in drought-affected areas at risk of severe wasting, a life-threatening form of malnutrition.

UNICEF is seeking donor support to accelerate humanitarian action in the region, protect the most vulnerable and save children's lives. 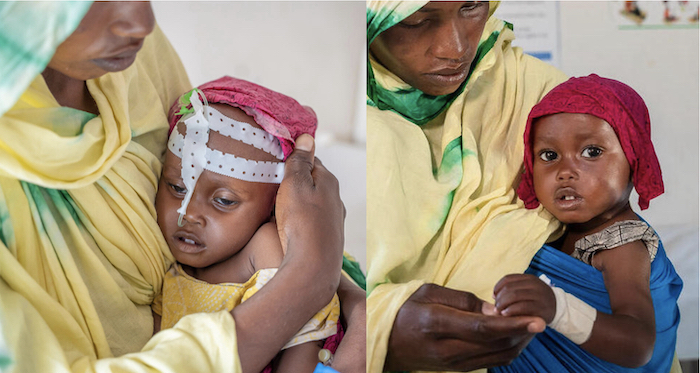 At left: 1-year-old Aisha, with her mother Isniino, a few hours after arriving at the UNICEF-supported hospital in Garowe, the capital of Puntland, northeast Somalia. Aisha was in critical condition, suffering from fever, vomiting, diarrhoea and dehydration; she was quickly diagnosed with severe acute malnutrition and given oxygen, glucose and amoxicillin in the hospital's stabilization center. At right: Aisha, three days later, on the road to recovery. UNICEF continues to be at the forefront of providing lifesaving treatment for children affected by severe wasting; as the malnutrition crisis among children in Somalia worsens — with some areas on the brink of famine — UNICEF is expanding services in all seven states, working with local and federal health authorities and other partners. © UNICEF/Ekpu VII Photo

“While collective and accelerated efforts have mitigated some of the worst impact of what had been feared, children in the Horn of Africa are still facing the most severe drought in more than two generations," UNICEF Deputy Regional Director for Eastern and Southern Africa Lieke van de Wiel said.

"Humanitarian assistance must be continued to save lives and build the resilience of the staggering number of children and families who are being pushed to the edge – dying from hunger and disease and being displaced in search of food, water and pasture for their livestock.”

Over 20m children across #Ethiopia, #Kenya and #Somalia are now facing the threat of severe hunger. We need a global effort to mobilize resources before irreversible damage occurs to #children in the #HornOfAfrica.
We need to ACT NOW #ForEveryChild
--https://t.co/oqPiiCr2v9 pic.twitter.com/VToiRLnDo4

20.2 million children are now facing threat of severe hunger, thirst and disease in Ethiopia, Kenya and Somalia — up from 10 million last July

The drought currently gripping countries all across the Horn of Africa shows no sign of letting up following five straight failed rainy seasons. It's not the region's first drought, but by all accounts it is its worst in 40 years — one more natural disaster fueled and compounded by climate change.

Water scarcity has displaced an estimated 2 million people as food and fuel prices have soared amid global inflation and grain shortages linked to the war in Ukraine. Outbreaks of cholera, diarrhea and measles are all on the rise.

By late December 2022, the estimated number of children facing the threat of severe hunger, thirst and disease had jumped to around 20.2 million, compared to 10 million in July.

To survive, families are adopting coping strategies that have dangerous and often irreversible consequences for children, UNICEF warns. These include reducing food intake, withdrawing children from school (to save money on school fees or to send children to work), selling off assets (livestock, household items or land), pushing girls into early marriage, and migrating to urban centers in search of assistance.

Close to 3 million children are out of school with millions more at risk of dropping out.

"We've actually seen the consequences directly," Deputy Regional Director for UNICEF in Eastern and Southern Africa Rania Dagash told the BBC last month. "[C]hildren face a wide range of dangers, from child labor to a doubling of child marriage numbers and female genital mutilation. We've seen a lot more intensity than we have ever seen before."

Fundamentally, Dagash added, "this is a water crisis, a nutrition crisis, a health one — and when combined with chronic conflict and rising food prices and disease, it creates a nightmare for children, especially in Somalia."

Widespread food insecurity is attributed to the drought, which destroyed crops, killed cattle and destroyed livelihoods. But the war in Ukraine has further aggravated the situation. Countries in the Horn of Africa region depend on grain imports from both Russia and Ukraine, leaving them vulnerable to the war's adverse effects on food production and supply chains. "Food prices are exponentially high for people who are already in dire straits," Dagash said.

Current humanitarian aid funding levels for the Horn of Africa drought crisis response are far below what is needed to cover immediate and long-term aid goals as set out in UNICEF's action plan for 2023.

That plan encompasses a broad range of interventions, from staffing and supplying mobile health and nutrition teams delivering emergency care to at-risk children to providing health facilities with lifesaving Ready-to-Use Therapeutic Food (RUTF) to treat children suffering from severe acute malnutrition (SAM). In 2022 (January through November), UNICEF and partners reached over 832,000 children across Ethiopia, Kenya and Somalia with lifesaving treatment for SAM. 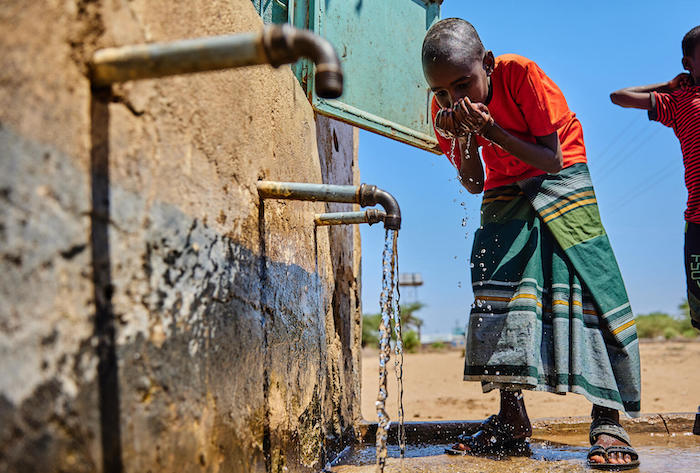 The Government of Kenya is leading the drought response at the national and county level, with support from UNICEF and partners. This includes emergency supplies to provide families with access to safe drinking water. Above, a boy drinks from a safe water point in Daley Village, Garissa County. © UNICEF/UN0641786/Orina

As the lead UN agency for water, sanitation and hygiene (WASH) needs, UNICEF is providing access to clean water and reliable sanitation, while promoting basic hygiene practices in rural and urban areas to strengthen disease prevention. In 2022, UNICEF reached over 2.7 million people in the Horn of Africa region with safe water for drinking, cooking and washing. UNICEF is also working with partners to develop climate-sensitive water infrastructure in drought-prone areas.

In education, UNICEF is helping displaced children get back to learning, providing protective safe spaces where children can also access critical health, nutrition and water services, along with mental health and psychosocial support. In 2022, UNICEF reached nearly 2 million children and women in the Horn of Africa region with essential lifesaving health care services — and vaccinated close to 2 million children against measles.

More support is needed to accelerate emergency response efforts across all program areas. UNICEF's 2023 plan asserts that both response pillars — the emergency relief and the resilience building and system strengthening work — "require equal attention and support" as children and families continue to be worn down year after year, with no time for recovery. While continuing to ramp up assistance in the region, UNICEF continues to make smart investments in the longer-term resilience of communities and their children through its WASH programming — including drilling for reliable sources of groundwater using satellite maps and probes to identify deep aquifers.

Protecting children and women from violence

Together with partners, UNICEF is also responding to increased risks of gender-based violence (GBV) fueled by economic hardships and social strife that comes with widespread food insecurity and displacement.

A growing number of women and girls are forced to travel longer distances to secure water, food and firewood for their families, leaving them vulnerable to sexual violence. Female-headed households, adolescent girls, older women and those with disabilities are at heightened risk.

Help UNICEF reach more children and families in need in the Horn of Africa. More funding is needed to save children’s lives, preserve their dignity and protect their futures. Donate today.

Top photo: Women and children queue for health and nutrition services from UNICEF and partners at the Higlo site for displaced families in Ethiopia. UNICEF is seeking donor support to continue expanding critical emergency relief across the Horn of Africa as severe drought continues to grip the region, intensifying needs. © UNICEF/UN0631311/Sewunet