A prolonged, crippling drought across the Horn of Africa is fueling a drastic increase in malnutrition rates for children and families. As the specter of famine once again threatens the subregion, children — especially the youngest — are in the greatest danger.

Speaking from Gode Hospital in Ethiopia's Somali region in late April, UNICEF Executive Director Catherine Russell stressed the severity of the growing emergency: "The situation is rapidly deteriorating, especially for children experiencing severe malnutrition in Ethiopia, Kenya and Somalia, where 1.7 million children require urgent treatment for severe acute malnutrition. If rains fail again in the coming weeks, this figure will rise to 2 million."

Four consecutive failed rainy seasons have decimated crops and caused abnormally high numbers of livestock deaths, creating the region's worst climate-induced emergency in 40 years. Food insecurity and lack of access to safe water have pushed hundreds of thousands of people out of their homes. In just three months, the number of people without reliable access to clean and safe water has almost doubled, from 5.6 million to 10.5 million.

The international community must act now to prevent famine:

Mothers across the region are bringing their malnourished children to UNICEF-supported mobile clinics, where they are screened and treated with Ready-to-Use Therapeutic Food. "I came seeking medication for my child," Iman Magan said as she sat outside a clinic in Debele with her child in her arms. "He was given medication and nutritious meals. I was met with great care."

More than 600,000 children have dropped out of school as a result of the drought in the Horn of Africa. The number of child marriages has risen dramatically across drought-affected areas as parents struggling to provide for their children consent to early marriage in exchange for a dowry, hoping their daughters will be fed and protected if they marry into a family with more resources. 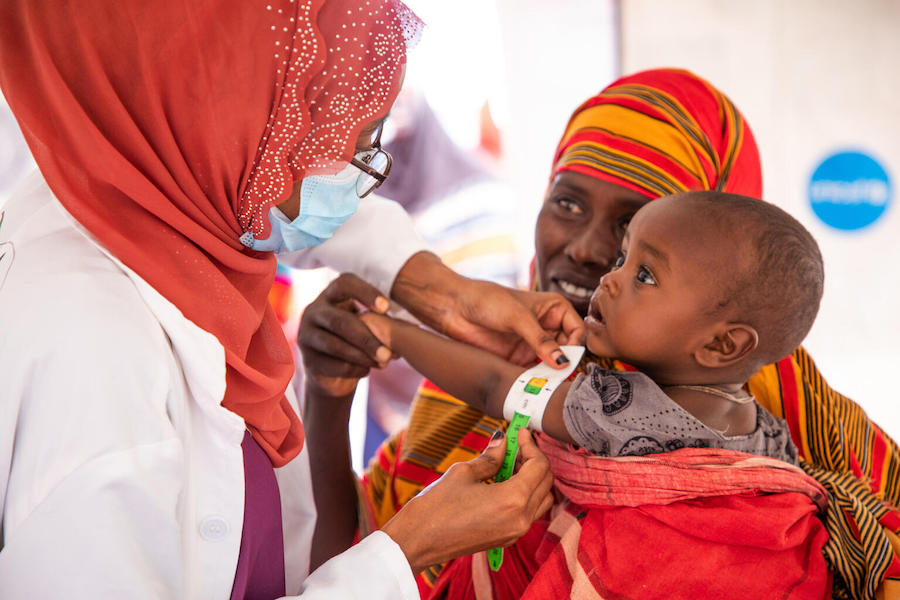 "We are witnessing a crisis on the brink of a catastrophe, but immediate and collective action can avert the worst outcome," said Russell.  "The crisis here in the Horn of Africa is not making headlines, but that doesn't make the threats to children and families any less dire."

In 2017, the humanitarian community came together to prevent famine, working alongside national governments, NGOs and local communities with the generous support of international donors, potentially saving hundreds of thousands of lives. "We need to do it again today," said Russell.

UNICEF and partners urgently need $250 million to save children's lives

"UNICEF and its partners urgently require $250 million to save children's lives and futures," said Russell. "Our response must be multisectoral, going beyond food security to include WASH, nutrition, health, protection and education services and support. This support needs to be coupled with investments in resilience building and climate adaptation programs to prepare communities to deal with a changing climate.

"We cannot turn our backs on the children in the Horn of Africa. It's not too late to prevent catastrophe, but we need the means to do it. And the window is closing as we speak."

Top photo: On April 11, 2022, a mother and a baby wait at a health post in Ba’adley, IDP Site, Shabelle Zone, Somali Region, Ethiopia. © UNICEF/UN0625011/Sewunet. Above: At the Higlo site for internally displaced persons, a health worker measures a child's mid-upper arm circumference to screen for malnutrition. © UNICEF/UN0631314/Sewunet. Video edited by Tong Su for UNICEF USA