As armed conflicts move increasingly into cities and other populated areas, it should come as little surprise that more and more children around the world are suffering the consequences.

When explosive weapons are used in these places, over 90 per cent of victims are civilians — many of them children or their parents.

Child survivors endure staggering physical injury and psychological trauma. Some may lose their sight, hearing or limbs. Almost all will need critical and sustained psychosocial support.

These losses magnify the threats children already face, by displacing them from their homes or exposing them to disease outbreaks and more. In protracted conflicts, for example, children are 20 times more likely to die from waterborne diseases linked to unsafe water and sanitation than from violence.

During conflict, children and the services they rely on must be protected

Even after conflict subsides, land mines and unexploded or abandoned ordnance — so-called "remnants of war" — can cause death and injury for years to come.

Fourteen-year-old Zainab, below, has fond memories of her childhood in Basra, Iraq. But there's a gaping hole in her recollection of the day in March 2020 when her life was forever altered in an instant.

"I went to an open area with my mom to collect some vegetables," she says.  "Then something happened, but I don't remember."

A piece of previously unexploded ordnance had detonated. Zainab remembers the heat from the blast, and waking up in a hospital five days later, with burns on her body, blinded by shrapnel that had embedded in her eyes. "When I woke up, they told me, 'There was an explosion next to you. Your mother passed away.' When I think of her, I start to cry. I lost my eyes. I lost my mother. She was my whole life." "I looked down and saw the fingers were hanging from my hand."

In 2017 in the Donetsk region of eastern Ukraine, 14-year-old Aleksey, below, lost a thumb and two fingers when a grenade plug he found exploded in his hand.

"I wasn't sure what that thing was. It looked like it could be a pen," he said. "My first feeling was shock and pain. I looked down and saw the fingers were hanging from my hand. My whole life has changed. I can't do everything I could do before ... I can't chop the wood, it's hard to tie the fishing line and it's hard to set the traps to catch animals. Sometimes I'm getting upset up until the moment when I break into tears." 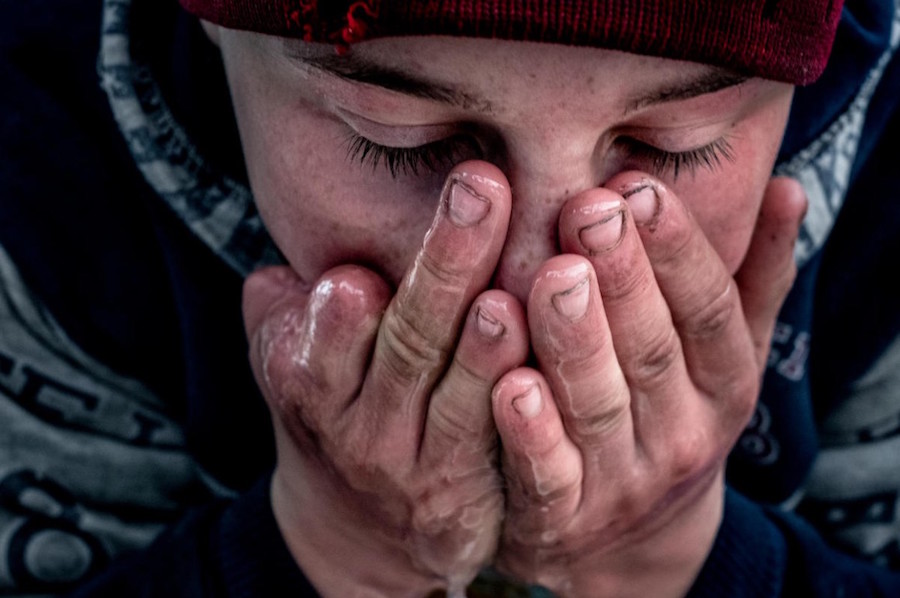 1. Air strikes, shelling and improvised explosive devices are killing children and leaving them with life-changing injuries.

2. Children who survive attacks, including those without physical injury, are at high risk of trauma.

6. After conflicts end, unexploded weapons can still cause death and injury for years to come.

No matter where they are used, explosive weapons endanger a child's most fundamental rights. UNICEF calls on governments to avoid the use of explosive weapons in populated areas (EWIPA) and to speak out to protect children from conflict.

Help stop the war on children. Your contribution can make a difference. Please donate.

Top photo: On Feb. 28, 2022 in Iraq, 5-year-old Hussein looks out the window of his temporary home in Habaniya, on the outskirts of Fallujah. In November 2021, Hussein was playing soccer with his brother when a piece of previously unexploded ordinance (UXO) detonated under him, ripping open his stomach and leaving part of his right ear missing. He still has shrapnel in his stomach and hands and suffers from post-traumatic episodes. © UNICEF/UN0611861/Ibarra Sánchez. Video edited by Tong Su for UNICEF USA