100 Days of War in Ukraine: Children on the Front Lines

The children of Ukraine have had their lives turned upside down by war.

Those who have fled have had to leave family and friends behind. They have seen things no child should ever see.

Amid the terror and uncertainty, however, there have also been small moments of joy. Families reunited after weeks of being apart. Friendship and helping hands in unexpected places. The continuing hope that one day soon, the war will end.

Here are some of their stories. 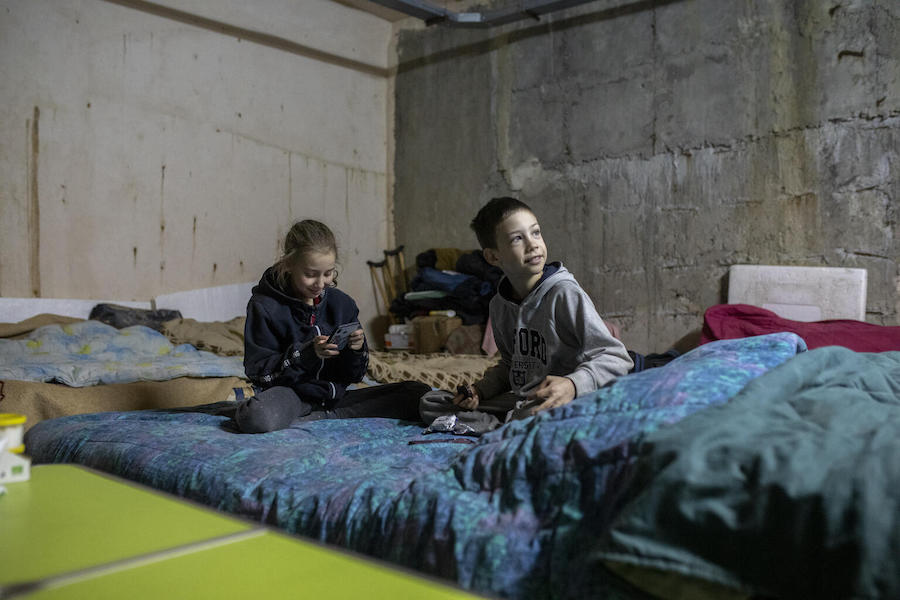 Alina and Artem, both 9, have spent the past three months living in a dark, dank underground car park in Kharkiv with their parents and a few other families, sheltering from the air attacks and shelling above. In dozens of underground shelters in the city, UNICEF-supported volunteers have set up spaces where teachers, psychologists and sports instructors can play and engage children like Alina and Artem on a regular basis. Educational videos released by the online kindergarten ‘NUMO’ regularly hit hundreds of thousands of views. An online education platform for students in grades 5-11 — developed by the Ministry of Education and Science with UNICEF support during the COVID-19 pandemic — is reaching over 80,000 displaced students inside Ukraine. 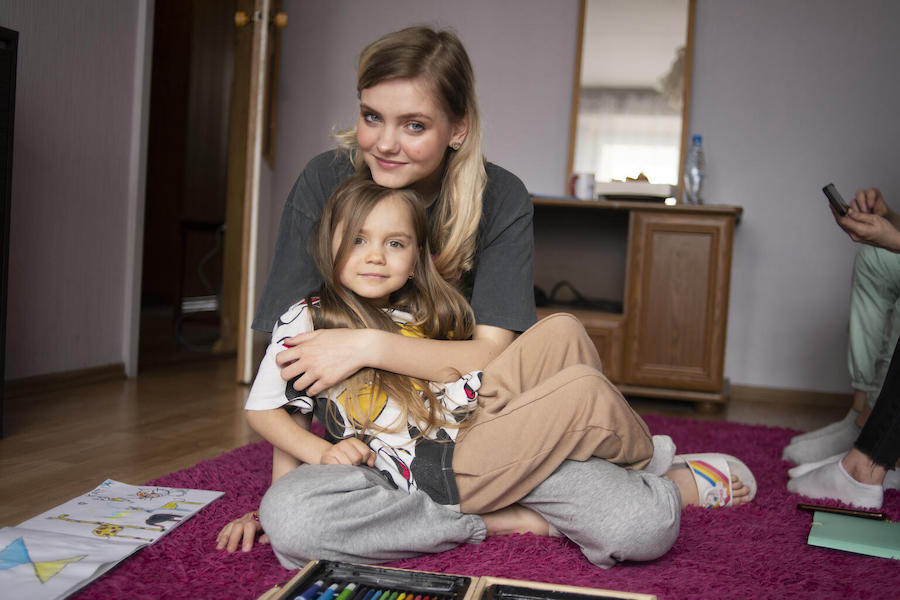 Oleksandra, 16, of Zaporizhzhia, southeastern Ukraine, hugs her sister Katya, 5, inside their temporary home in Warsaw, Poland. On March 10, after two weeks in bomb shelters, Oleksandra — who plans to become a journalist, and kept video diaries of her experiences at the beginning of the war while she was still in Ukraine — crossed the border into Poland with her sister and their mother and grandmother. Their father is still in Ukraine. "They say that home is not the place but the people, but still, home is the place where you feel most comfortable," Oleksandra says. "It's very sad to find yourself here and to have your heart there." Vitya, 11, is from Volnovakha, eastern Ukraine, and had been studying guitar when war broke out. He had to leave his beloved instrument behind as the family fled the fighting. While they were staying in a temporary shelter in a church in the western city of Vinnytsia, a group of volunteers raised funds for a replacement, so Vitya is making music once again. "My mom loves when somebody plays for her," Vitya says. Vitya and his mother are now living in Poland. "My biggest dream is to come back home, and that everything will be as it used to be: music classes, boxing, riding bicycles with friends, and me helping my parents." 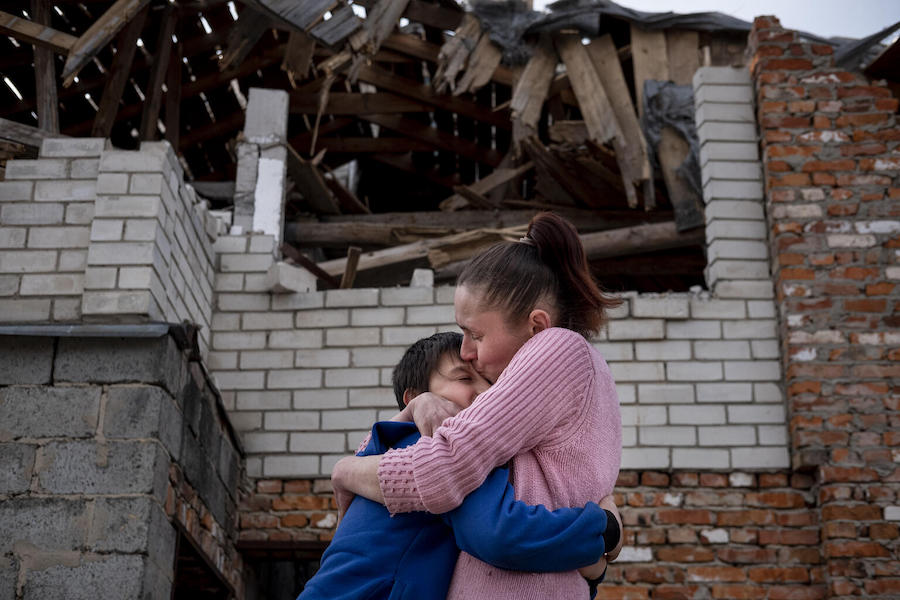 After a month apart, Olena, 43, is reunited with her son, Mikhailo, 9, outside their damaged home in Novoselivka, outside of Chernihiv, Ukraine, on April 15, 2022. Their small village was the site of fierce fighting and the area is almost completely razed. As conflict neared their home, Olena sent Mikhailo to live with their neighbors until it was safe to come back. Mikhailo says he was frightened when he had to leave his mother, and is happy to be home, "though it’s sad to come home and see my house like this."

Chernihiv, located close to the border with Belarus, came under siege following the escalation of war on Feb. 24, leaving the city without running water, food, electricity or means of communication. Aerial bombardment and shelling destroyed schools, hospitals, homes and bridges. Some residents fled, others remained, living in makeshift bomb shelters for weeks. In the first days of April, troops withdrew, but residents fear they will return at any moment.

Karina, 17, left her home in a village near Mykolaiv, Ukraine, and is now in Husi, Romania. She is a first-year student at Dnipro city's University of Customs and Finance, but while studies continue online, she cannot participate as she lacks a computer and internet access. "When there was a conflict in Donetsk and Lugansk, I understood what was going on there, but did not associate with it. But when it happened to me, I understood."

Local authorities and local organizations in Husi are supporting refugees with offers of free accommodation, food and transport to next-stop destinations. Working with the government and other partners, UNICEF is providing social assistance, psychological counselling, legal advice and registration at Blue Dot centers established jointly with UNHCR. "You appreciate each moment of life and rejoice in the fact that you already have it," Karina says. 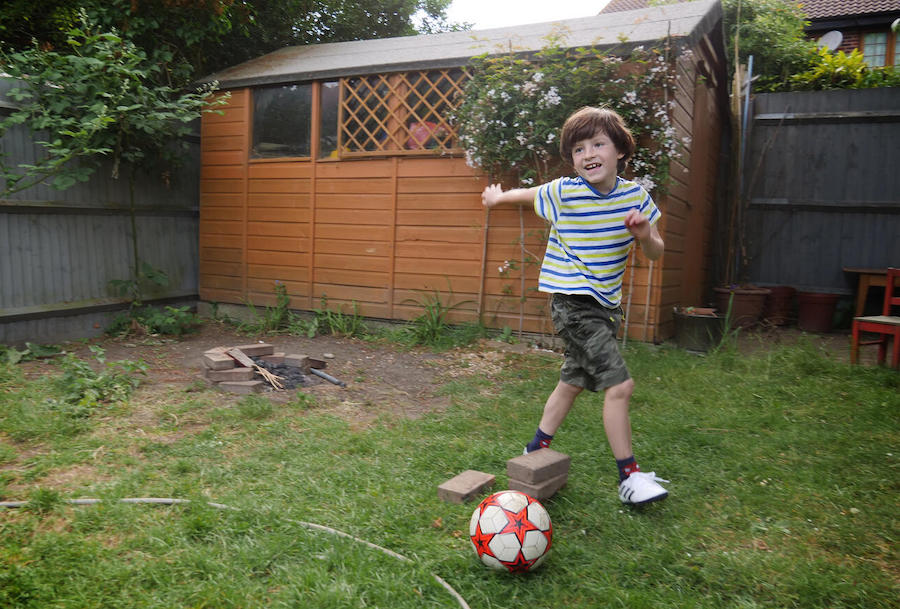 Davyd, 7, of Bucha, Ukraine, plays soccer in the backyard of his aunt's home in London with the help of a new pair of cleats. "I've never had these before!" he says. When the war started, Davyd and his family hid in their basement for a week. When the lights and gas on their street disappeared, and they lost their internet connection, the family decided to evacuate. They borrowed fuel for their car from a neighbor. “We drove past burnt, shot cars," Davyd recalls.

In Kyiv, the family found refuge in a church. Eventually Davyd and his mother, Yevgenia, made it to Poland and then on to London, where Davyd is attending school and learning English. He is also learning how to play the piano. Yevgenia says she is starting to feel more herself, but processing the war and its consequences "will take a lifetime." She and her son arrived at her sister's house in April. 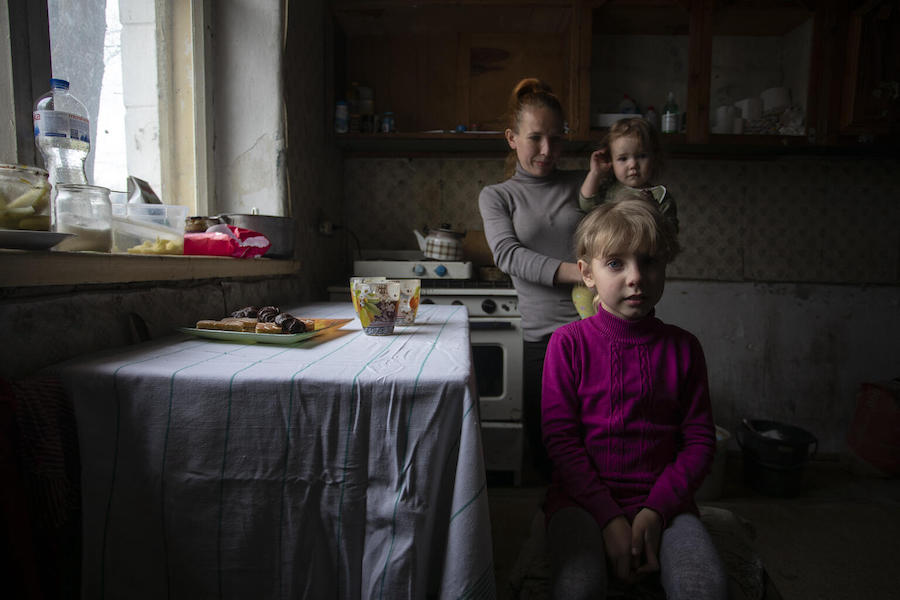 Vika, 8, of Avdiivka, eastern Ukraine, sits in the kitchen near her mother, Hanna, and younger sibling at a relative's home where they are staying temporarily in Cherkasy oblast. When fighting in their area intensified earlier this year — for them, a continuation of a conflict they'd long been experiencing in the eastern region — the family took shelter in the basement of their own house. For almost two months, the children did not see the sun. Then, while waiting for an evacuation bus, there was an artillery attack. "We were so scared," Hanna recalls. "We were literally crawling away from shelling. I was forced to save the lives of my children and myself again, as I did in 2014." Avdiivka is in Donetsk, an area where armed conflict has raged for the past eight years and where one in six schools are now either damaged or destroyed.

UNICEF has been providing support to impacted families in the region since the beginning, and continues to work with partners across Ukraine to deliver safe educational opportunities to out-of-school children.

Support UNICEF's efforts to reach Ukrainian children and families in need in the country and in refugee-hosting countries. Your contribution can make a difference.

Top photo: Vika, 8, from Avdiivka, eastern Ukraine, works on her homework in her relatives' house in Cherkasy oblast. In Avdiivka, she lived just a few kilometers from the front line, so her whole life has been inextricably intertwined with hostilities and mine threats. "I used to study in first grade in Avdiivka," Vika says. "And I liked it. But then the war started. And it took my school away." © UNICEF/UN0642274/Filippov