Water in Times of Crisis

When famine and disaster strike, clean water and sanitation prevent a cycle of disease and malnutrition.

Millions of people across the globe have no access to clean, safe water. Add conflict, crisis and famine, and the problem quickly magnifies. The inverse is equally true: clean, safe water can help a crisis from getting worse.

Children die every day from diseases caused by the water they drink.

Unsafe water and poor sanitation can spawn diseases that prey on children, especially when children are already weak from lack of food. Disease and diarrhea also take advantage of malnutrition, making children even weaker and more susceptible to illness.

Children die every day from diseases caused by the water they drink.

Cholera spreads in food and water that has been contaminated with human waste. So toilets, which help prevent the contamination of water, are critical to fighting disease.

Safe water is also essential in treating those who are suffering from disease. 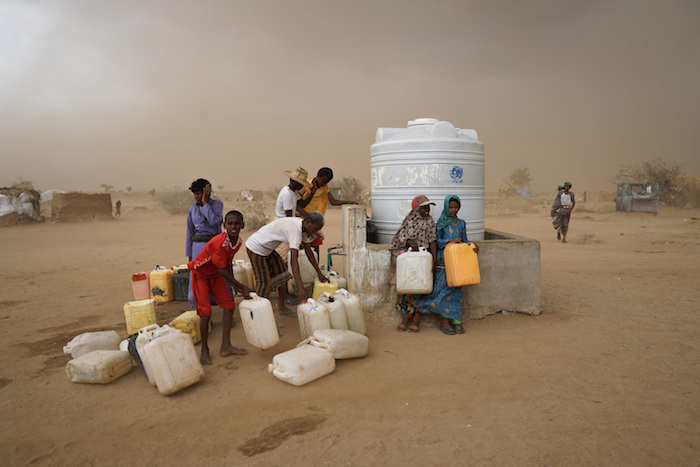 Collecting water as a sandstorm approaches in a settlement for internally displaced persons in Hajjah Governorate, Yemen. Water, carefully rationed, is available during one-hour windows, normally three times a day. © UNICEF/UN073954/Clarke for UNOCHA

Those driven from their homes are confronted with poor sanitation, malnourishment, and disease. They are often forced to rely on surface water, and do not have access to toilets. Also, they are too often unable to reach hospitals and health centers.

Amid conflict and famine, stressed healthcare systems are unable to manage an outbreak of infectious disease

Diseases that arise and spread with lack of clean water can overwhelm healthcare systems that are already not only damaged, in need of trained staff, or lacking supplies—but may also have inadequate water and sanitation.

In Yemen in July 2017, it had been more than 10 months since more than 30,000 health workers were paid. Especially with such a fragile infrastructure, it is easier and more effective to prevent an outbreak than to try to contain it once it has taken hold.

In the harshest conditions, UNICEF teams get to work

UNICEF plays a vital role in preventing disease by providing water and sanitation in areas suffering from famine and crisis. UNICEF teams are deployed — often in harrowing conditions — to mobilize water trucks and set up storage tanks, filters, handwashing stations and toilets, and conduct educational activities to teach people how to keep safe from disease.

This work is vital, particularly to people in northeast Nigeria, Somalia, South Sudan and Yemen and other areas caught up in conflict and famine. 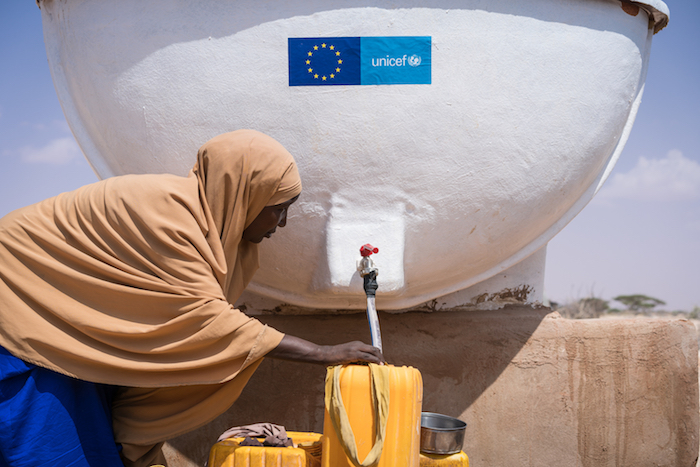 Drought forced this woman from her home. Now she fills containers with clean water in a camp in Galkayo, Somalia, for internally displaced people. Drought is worsening a situation that is especially grave for children, many of whom have stopped going to school. Displaced children are in danger of being recruited into armed groups. © UNICEF/UN061107/Knowles-Coursin

UNICEF teams are deployed — often in harrowing conditions — to mobilize water trucks and set up storage tanks, filters, handwashing stations and toilets, and conduct educational activities to teach people how to keep safe from disease.

In areas of conflict, famine and drought around the world, UNICEF responds. Interventions in acute disasters are rapid and limited; in complex situations, they are comprehensive and long-term. UNICEF is fighting famine by providing safe water to more than 2.5 million people in famine-affected areas. UNICEF is the lead agency in the world for the provision of water, sanitation and hygiene in emergencies, and UNICEF also coordinates multi-agency efforts in this area. In emergency responses last year, UNICEF helped provide clean water for 18 million people and improved sanitation to 4 million.

In Yemen, water networks that serve cities are on the point of collapse from damage and disrepair caused by war. Around 15 million people have been cut off from regular access to water and sanitation. The result is an outbreak of cholera and acute watery diarrhea. More than half of the sufferers in Yemen — more than a quarter of a million — are children.

UNICEF is addressing this crisis. Between January and June in Yemen, UNICEF reached nearly 300,000 people with water. In addition, UNICEF is rehabilitating rural water systems that will provide half a million people with safe, clean water.

Somalia — where, since November 2016, 766,000 people displaced by drought have left home in search of food and water — is also enduring an outbreak of cholera. There have been more than 77,000 cases. The drought is exacerbating the nutrition crisis, with a risk of famine in the latter half of 2017.

And in South Sudan, since June 2016, more than 19,000 have contracted cholera. There, almost half the water points have been damaged or destroyed — sometimes intentionally.

“In far too many cases, water and sanitation systems have been attacked, damaged or left in disrepair to the point of collapse,” said Sanjay Wijesekera, UNICEF’s global chief of water, sanitation and hygiene.

Syria and Iraq are other regions where the need for water has been used against civilians. In 2016, there were at least 30 deliberate water cuts, with pumps destroyed and water sources contaminated. Around 15 million people there are in need of safe water, including an estimated 6.4 million children. In Mosul, Iraq, water networks were hit with mortars in June. UNICEF spokesperson Laila Ali said providing water to the people of Iraq’s second-largest city was not easy. “Approximately 600,000 people in eastern Mosul, half of them children, were left without water. Shortly after, local authorities with UNICEF started trucking in 2.4 million liters of water per day.”

Approximately 600,000 people in eastern Mosul, half of them children, were left without water. Shortly after, local authorities with UNICEF started trucking in 2.4 million liters of water per day. — UNICEF spokesperson Laila Ali

In northeast Nigeria, destruction of most of the water and sanitation infrastructure has compounded the repercussions of insurrection, displacement and malnutrition. Basic water services are unavailable to more than 3.5 million people.

“Children’s access to safe water and sanitation, especially in conflicts and emergencies, is a right, not a privilege,” said Wijesekera. ”In countries beset by violence, displacement, conflict and instability, children’s most basic means of survival — water — must be a priority.”

Toilets and waste management systems are critical to preventing the contamination of water, and safe water is essential to treating those who are already suffering from the disease.

In South Sudan, UNICEF has helped around 207,000 people gain access to sanitation and 610,000 to safe water. In areas affected by cholera, UNICEF has dug 22 boreholes to bring water to more than 210,000 people. 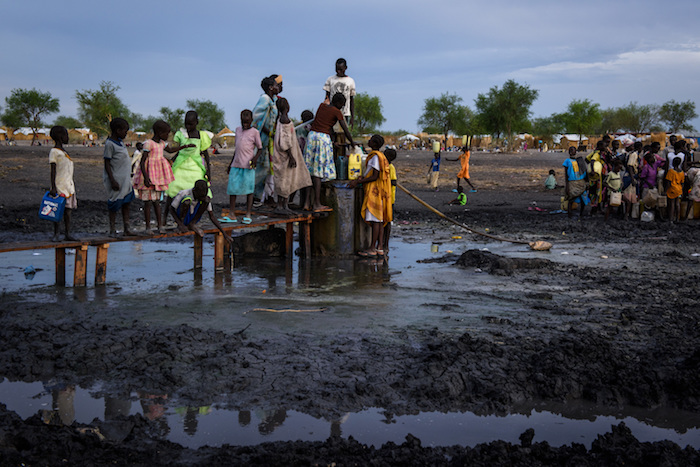 Drawing water at a borehole in the river bed running through the village of Aburoc, South Sudan, where thousands of people, displaced by fighting near their homes, live in the open. © UNICEF/UN065988/Hatcher-Moore

In Somalia, 1.66 million people have gained temporary access to safe water, and more than 890,000 have also been given hygiene kits—buckets full of household supplies, including soap, detergent, toothbrushes, toothpaste and towels.

In northeast Nigeria, UNICEF has worked with partners, at times risking lives, to bring safe water to about 845,000 people.

UNICEF not only intervenes at the height of an emergency but also takes part in in emergency preparedness planning and supports reconstruction efforts when a crisis has abated. 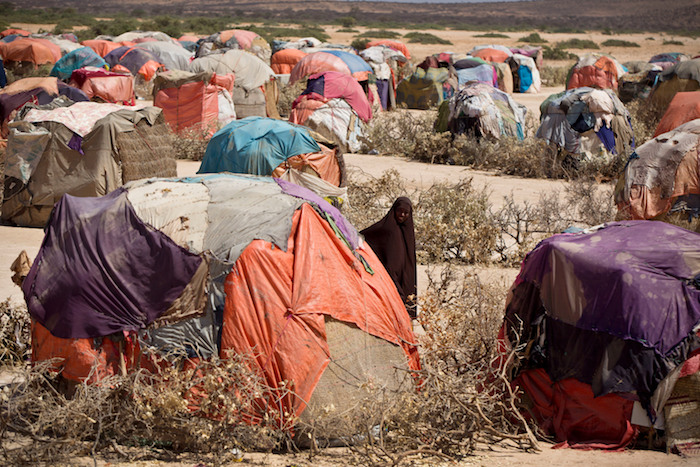 Severe drought in Somalia, following the failure of consecutive rains, caused this woman to leave her home and live in a temporary shelter near Ainabo. The drought and other blows have left some communities with few or no resources. Prices for water and food have risen, and thousands of people are on the move in search of food and water, with a consequent increase in waterborne diseases © UNICEF/UN057374/Holt

Governments are planning for approaching changes in water availability and demand. Risks from changes in climate need to be integrated into policies and services, and investments made to protect high-risk populations. Businesses can help by supporting efforts within their communities to prevent contamination and depletion of safe water sources. Communities can prepare for the future by exploring ways to diversify water sources and increase the availability of safely stored water.

UNICEF knows that it is not just right in principle to support … pumping money into … water to prevent cholera, it is also right in practice because it goes further down the line. — James Elder, UNICEF spokesman for East and Southern Africa

“UNICEF knows that it is not just right in principle to support … pumping money into … water to prevent cholera," says James Elder, UNICEF spokesman for East and Southern Africa. "it is also right in practice because it goes further down the line.”

Read the UNICEF report: Thirsting for a Future: Water and Children in a changing climate.

Beyoncé's #BeyGood4Burundi has teamed up with UNICEF to help solve the water problem in Burundi.

Donate to help get children the safe water they need to survive and thrive.

Banner photo: Angelina carries safe drinking water from a rehabilitated pump in Bentiu, South Sudan. She used to spend about two hours a day going on foot to a river for water.  © UNICEF/UN075394/Kealey