Clean Water: A Right, Not A Privilege | UNICEF USA

Clean Water: A Right, Not A Privilege

There is enough clean water on the planet for everyone. Yet every day, millions of children go without.

Some three in ten people — 2.1 billion — have no safe drinking water at home, according to a new report by the World Health Organization (WHO) and UNICEF. Six in ten, or 4.4 billion people, lack properly managed sanitation. Of those, 2.3 billion lack basic sanitation services. This includes 600 million people who share a toilet or latrine with other households, and 892 million people — mostly in rural areas — who defecate in the open.

Safe water, effective sanitation and hygiene are critical to the health of every child and every community.

Billions of people have gained access to basic drinking water and sanitation services since 2000. But these services do not necessarily provide safe water and sanitation. As a result, 361,000 children under the age of 5 die from diarrhea every year. Poor sanitation and contaminated water are also linked to transmission of diseases such as cholera, dysentery, hepatitis A and typhoid. It takes about 260 million people in the world at least half an hour to collect water for their families, and nearly 160 million still drink untreated water from streams and lakes. Afnan, 11, and her family were displaced from their rural Damascus home four years ago. Now living with a relative in Al-Midan, they turned to a private vendor after going for two weeks without running water. "The water we bought was very expensive and it tasted strange," says Afnan. Her older sister became ill and missed three days of school. "Since my sister got sick, my father goes every day to a nearby mosque and collects drinking water." 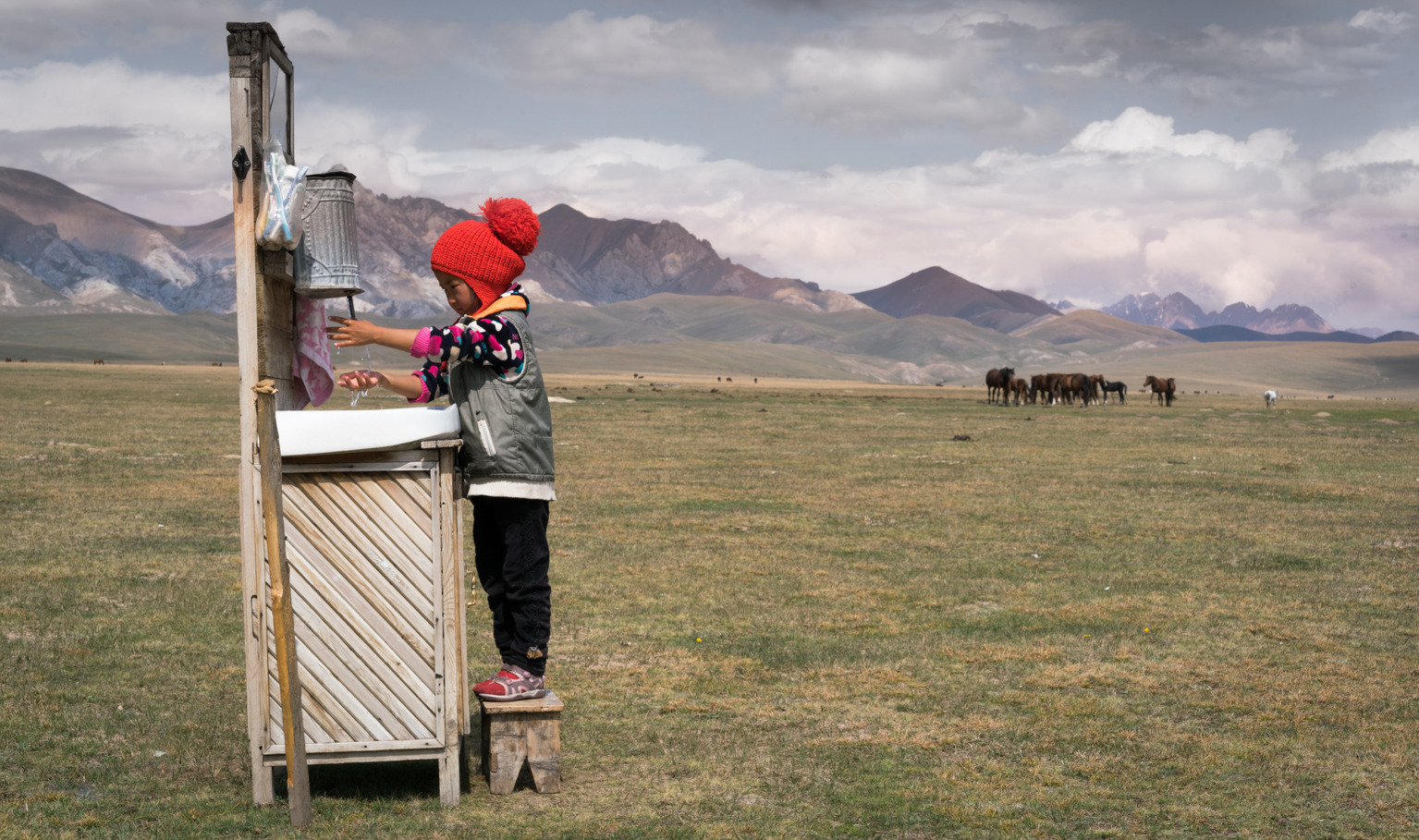 Good hygiene is one of the simplest and most effective ways to prevent the spread of disease — and yet only 15 percent of the population in Sub-Saharan Africa has access to soap and water for handwashing. The rate is higher — 76 percent — in northern Africa and western Asia. Ainazik, 5, of Naryn Province, Kyrgyzstan, demonstrates her hand-washing technique at an outdoor basin complete with a mirror, step stool, soap, toothbrush and cupboard. Less than 10 percent of people living in rural areas of Côte d'Ivoire have access to clean and functional toilets. In the village of Guehiebly, Emmanuelle Zroh, 26, is happy to let her neighbors use her newly installed turquoise toilet. "But when they're done, they have to clean it," she says firmly. "I want to keep my toilet nice and clean." Before the toilet was built, Zroh and her neighbors defecated and urinated outdoors. "It was not only not hygienic," she says. "It was also dangerous."

UNICEF's water, sanitation and hygiene team works in more than 100 countries to improve access to safe, clean water and sanitation facilities. Whether by delivering clean water after a disaster or promoting safe hygiene practices in schools and communities, UNICEF is on the ground helping children in need. You can help.

Beyoncé's #BeyGood4Burundi has teamed up with UNICEF to help solve the water problem in Burundi.

Photo at top: All people need safe, uncontaminated water to live. Here, two children get water from a barrel in the village of Kotouba, in northwest Côte d'Ivoire. Over one-third of all residents in rural Côte d'Ivoire live in homes without clean running water.