GH performing in the white suit.jpg

On August 1, 1971, a young George Harrison, having recently gone solo after playing guitar for The Beatles, put on a show at New York's Madison Square Garden with some friends to benefit UNICEF. The Concert for Bangladesh ultimately raised millions for emergency relief efforts in the Southeast Asian country, which at that time had been suffering from the effects of floods, famine and civil war.

The remarkable success of that historic event — one that continues to be celebrated year after year, and lives on in recordings and documentary footage — led Harrison's family to create the George Harrison Fund for UNICEF (GHFU) as a way to continue that legacy of giving.

George Harrison died in 2001 at age 58. His wife, Olivia Harrison, founded the Fund in 2005 with the encouragement of then UN Secretary-General Kofi Annan.

"We wanted to expand and to help children all over the world, if we could," she explained in a 2020 interview with UNICEF USA national council member Sara Ketabi.

Today, in partnership with UNICEF USA, GHFU is keeping the legacy alive, supporting UNICEF's work to help children in Bangladesh and in several other countries.

A trip to Bangladesh 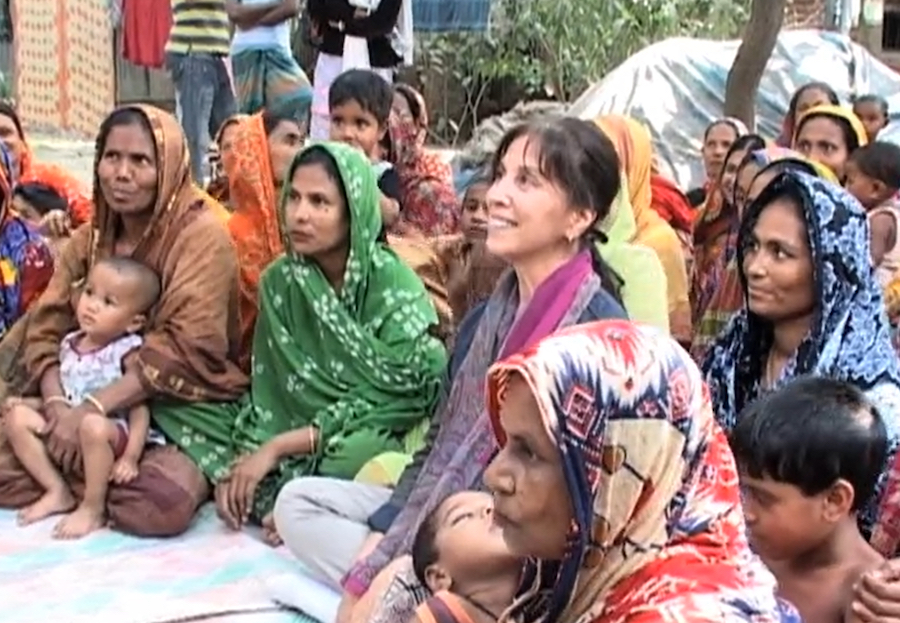 Olivia Harrison traveled to Bangladesh in 2011 to see the impact of the Fund's support for children there. "I really feel I have a strong connection to this country," Harrison said in an interview filmed during the visit. "Children need to be protected and they need to be empowered." 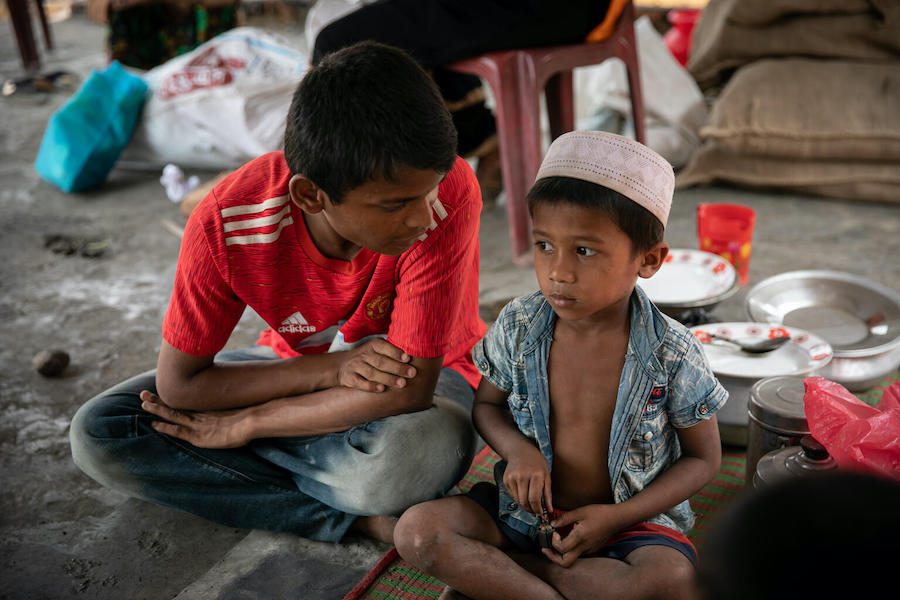 Mohammad Faisal, 18, comforts a young boy whose family has gone for help after their home was lost to a fire that devastated the Balukhali area of the Rohingya refugee camps in Cox’s Bazar, Bangladesh. Thousands of homes were destroyed, upending the lives of Rohingya families and children already struggling to survive. © UNICEF/UN0432247/Lateef

Supporting programs in Bangladesh — where local humanitarian needs have grown and have become increasingly complex due to the ongoing Rohingya refugee crisis — remains the Fund's focus. In March, GHFU supported UNICEF's emergency response after a fire swept through four refugee camps in Cox's Bazar, leaving tens of thousands of families homeless.

Previously, the George Harrison Fund was a sponsor of a UNICEF 'Child-Friendly Schools' initiative in the remote Kaptai Lake area, which focused on increasing access to basic primary education and learning opportunities for hard-to-reach children. 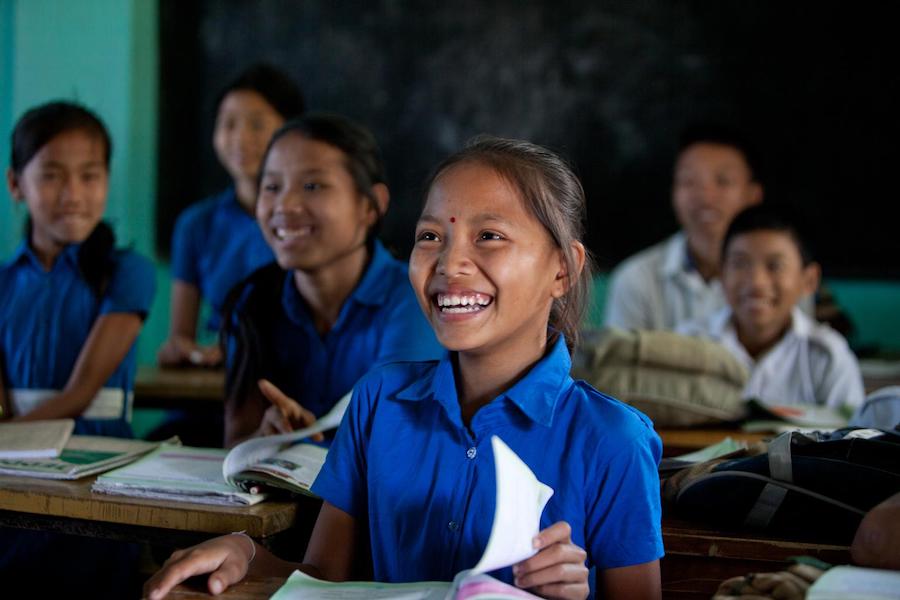 The Fund has provided additional support over the years for UNICEF interventions in Angola, Brazil, Haiti, India, Mozambique and Romania, while also helping to address the urgent needs of migrant children staying in shelters and host communities near the U.S.-Mexico border.

A growing number of young people all across the U.S. continue to be inspired by Harrison's legacy and connection to UNICEF. A GHFU-sponsored Clubs Challenge invites members of UNICEF Campus Clubs at high schools and colleges across the U.S. to compete to see who can raise the most money for UNICEF, offering to match donations up to $100,000. 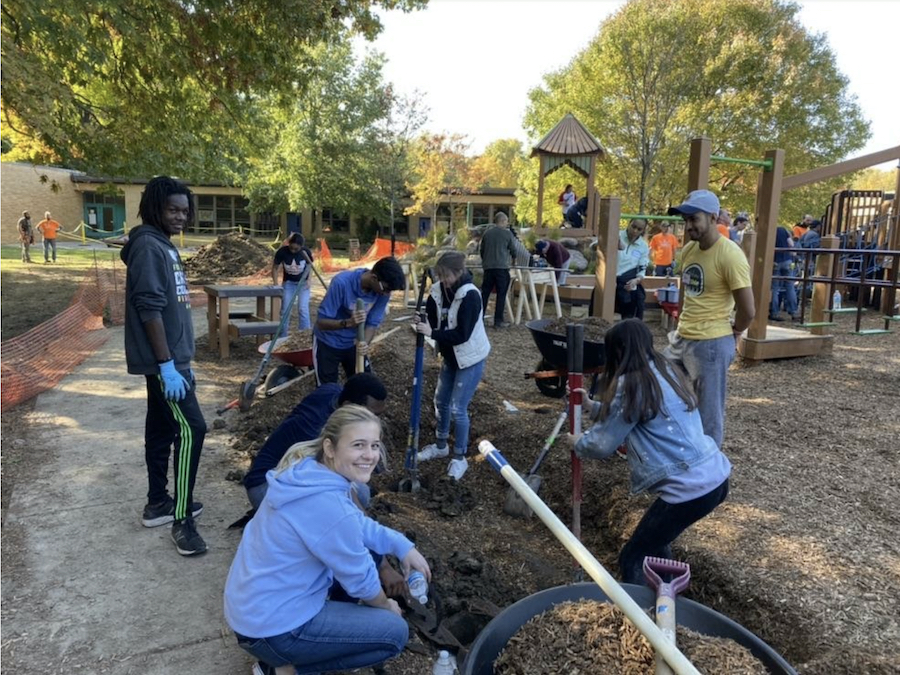 Members of the UNICEF Club at the University of Michigan helped build a playground at an Ann Arbor elementary school, one of the Club's many community service projects. © Photo provided by UNICEF-UM

“Although the year was difficult with the COVID-19 pandemic and classes being online, the changes in circumstances presented a new opportunity – we were able to go virtual, collaborate with other organizations and make the most out of the situation," said Omar Fehmi, UNICEF-UM's Outreach Chair. "In the past year, we’ve collaborated with over 50 student organizations and I know that in the future, working with UNICEF UNITE, we are going to be able to expand our collective impact. When we come together, we’re able to do so much more."

In her 2020 interview with UNICEF USA, Olivia Harrison reflected on the Fund's role in promoting global citizenship. "I think young people are more conscious than ever and more compassionate than ever," she said. "To know you are helping, even if it's just one person, that’s all it takes. It’s a seed we all have to plant within ourselves. Charitable work is a muscle; the more you do, the stronger it gets, and it becomes part of your being."