After a Deadly Fire, a Somber Ramadan for Rohingya Children | UNICEF USA

After a Deadly Fire, a Somber Ramadan for Rohingya Children

UNICEF is on the ground assisting Rohingya families devastated by a blaze that swept through four refugee camps in Cox's Bazar, Bangladesh. Less than four years ago, ethnic Muslim Rohingya fled a military-led massacre in Myanmar. For many, this is the second time they have lost everything.

The embers were still burning in Cox's Bazar, Bangladesh as UNICEF teams rushed to help children and families after a devastating fire swept through four Rohingya refugee camps on March 22, 2021.

UNICEF staff and community volunteers immediately began working to reunite separated children with their families and to support relocation efforts for families whose shelters had been destroyed. The fire is believed to have killed at least 11 people, including 3 children. An estimated 50,000 people — half of them children — were left homeless by the blaze.

The blaze left an estimated 50,000 people — half of them children — homeless 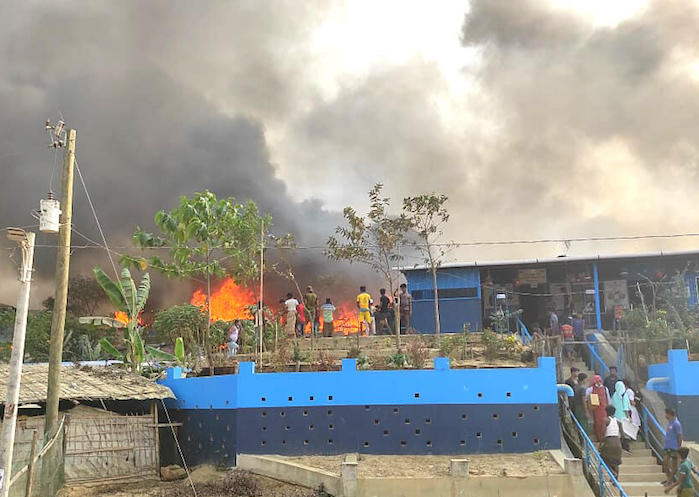 On March 22, 2021, a massive fire raged through four Rohingya refugee camps in Cox's Bazar, Bangladesh, ravaging homes and community resources like this clinic supported by UNICEF and Partners in Health and Development. © UNICEF/UN0432275/PHD

"The fire yesterday destroyed almost everything," UNICEF Cox's Bazar Communication Officer Nazzina Mohsin said on March 23. "Everything will have to start from scratch now."

UNICEF and partners have delivered emergency water, sanitation and hygiene supplies and water services to the camps. Mobile medical teams are providing first aid support to people who suffered burns, cuts and other injuries. 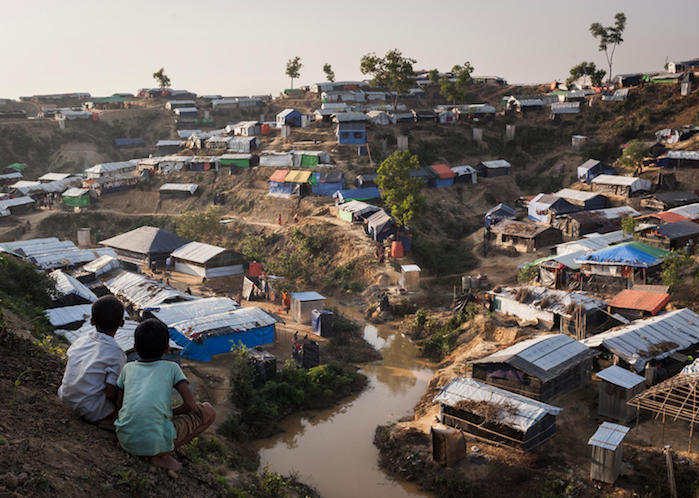 In August 2017, 725,000 ethnic Muslim Rohingya refugees fled a military-led campaign of violence in Myanmar, sometimes with little more than the clothes on their backs, and crossed the border into southern Bangladesh. There, they built one of the world's largest refugee settlements, a sea of closely packed — and highly flammable — bamboo and tarp shelters.

In Bangladesh, Rohingya refugees were free to observe Ramadan without sanctions for the first time 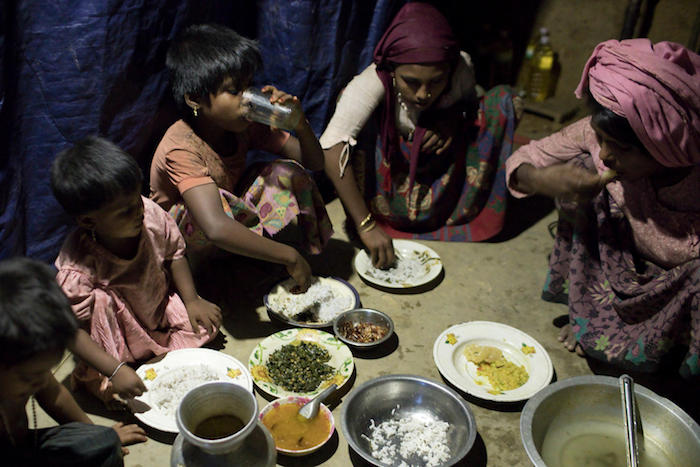 Observing Ramadan without fear of reprisal is a relatively new concept for the Rohingya community. Before they were forced out of Myanmar's Rakhine State, where they had lived for centuries, they prayed in secret or risked arrest. Mosques sprang up in the crowded encampments of Cox's Bazar and refugee families felt free to fast, pray and study the Quran.

"Here we can pray," said one Rohingya refugee 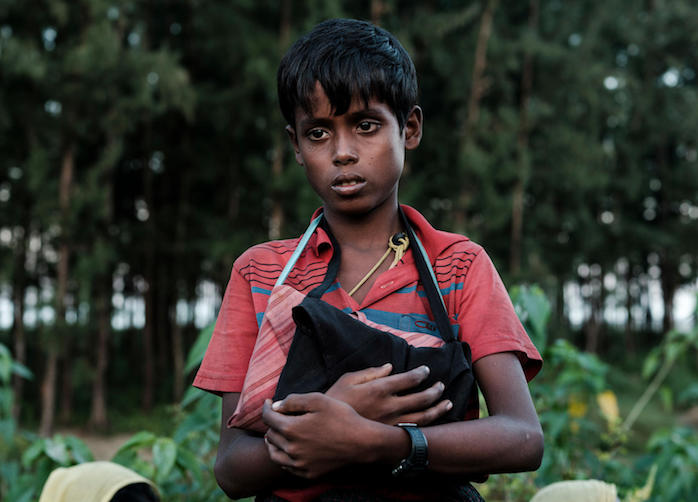 Homes, learning centers, health clinics and water and sanitation facilities will need to be rebuilt 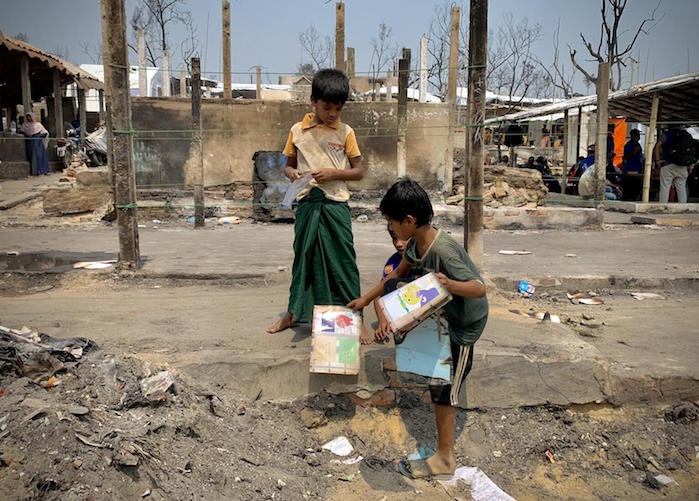 Some children visit their burned learning center to see if any reading materials could be salvaged after a fire destroyed a large part of Balukhali Rohingya refugee camps in Cox’s Bazar on March 22, 2021. © UNICEF/UN0433889

This Ramadan, families are struggling to survive amidst the wreckage of the fire. More than 140 learning centers were destroyed; water and sanitation facilities sustained significant damage and will need to be repaired. Meanwhile, COVID-19 remains a constant threat in the crowded camps, where social distancing and access to soap and water for handwashing remain hard to come by. 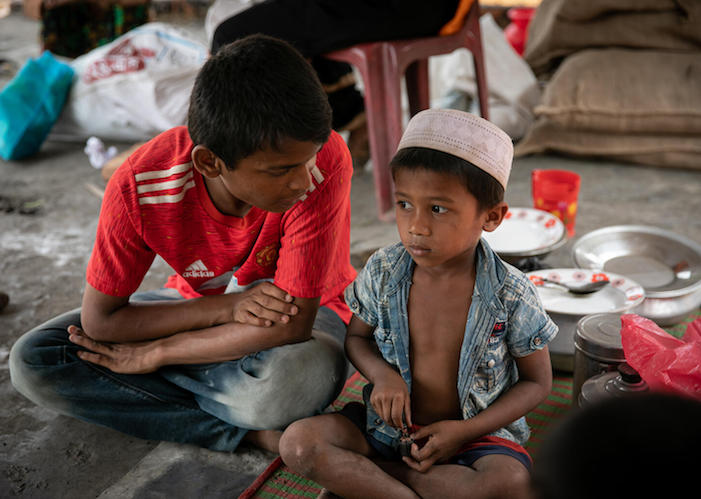 On March 24,2021, 18-year-old Mohammad Faisal comforts a younger Rohingya refugee whose family went to find help after their house was destroyed in a fire that devastated the Balukhali area of the refugee camps in Cox’s Bazar, Bangladesh. © UNICEF/UN0432247/Lateef

“Amidst this latest round of displacement, UNICEF urges the international community to step up its funding support for their immediate as well as longer-term needs," UNICEF Executive Director Henrietta Fore said. “UNICEF also renews its call on all relevant parties and governments to ensure a long-term solution where Rohingya children and their families should be able to live as full members of society in peace and harmony with their neighbors back at home in Myanmar.”

This Eid al-Fitr, we are reminded of our responsibility and power to do good. Please donate today to help UNICEF keep vulnerable children safe and healthy.

Top photo: On March 23, 2021, Sharifa holds her infant nephew in her arms as they stand in front of shelters destroyed by a massive fire in the Balukhali area of the Rohingya refugee camps in Cox's Bazar, Bangladesh. Sharifa is pregnant with her first child and worried about her immediate future. © UNICEF/UN0431933/Mohsi