UNICEF is on the ground in northeast Syria, providing emergency assistance to children and families who fled intense fighting in and around the Ghwayran detention center in the city of Hasakah.

On January 20, Islamic State (ISIS) fighters launched an assault on the detention center in an attempt to free some of their counterparts, igniting a violent clash with Kurdish-led Syrian Defense Forces (SDF) who control the facility. When the siege began, the detention center — one of the largest in northeast Syria — housed 5,000 detainees, including up to 700 children of ISIS members, some as young as 12.

UNICEF Executive Director Henrietta Fore called for the release of the underage prisoners on January 25, saying, "None of them has been charged with any crime under national or international law. The children of foreign nationals have received little to no support from their home countries. These children should never have been held in military detention in the first place. The violence they are subjected to may amount to war crimes." 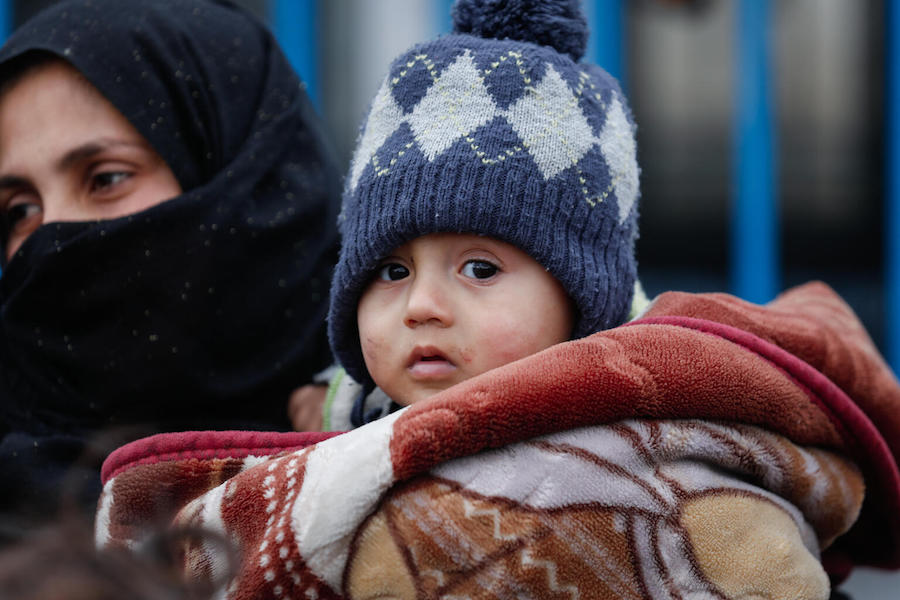 An estimated 45,000 people who live in the vicinity of Ghwayran were forced out of their homes as the violence escalated during the ten-day siege. UNICEF is working with partners to provide essentials, including safe drinking water and critical hygiene supplies, to the displaced families. UNICEF’s volunteers helped people reach shelters and clinics and distributed food, blankets, mattresses, clothes and medicine. 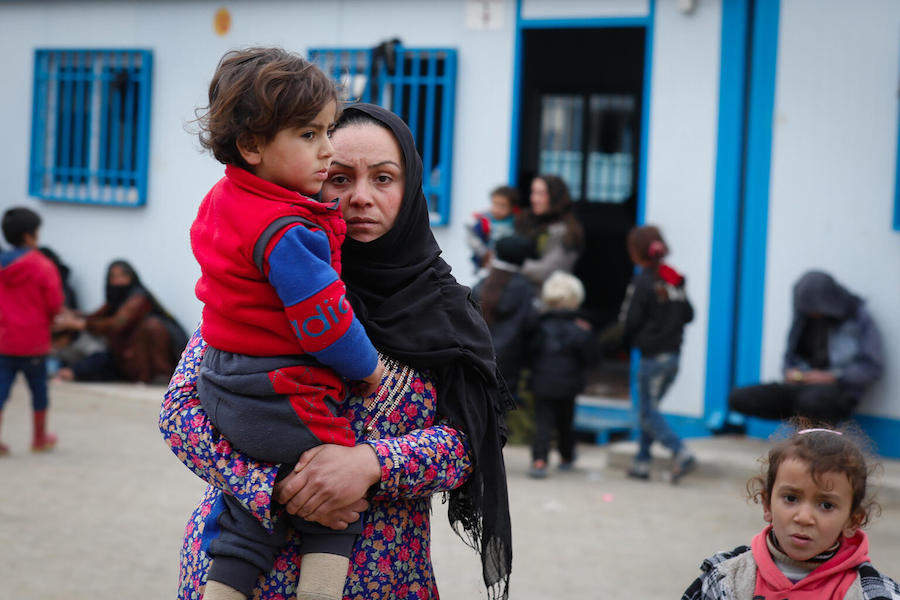 Some 650 displaced families have taken refuge at a UNICEF-supported temporary shelter at Waleed Nofal school in Hasakah city. UNICEF volunteers are providing children with recreational equipment and a safe space to play. 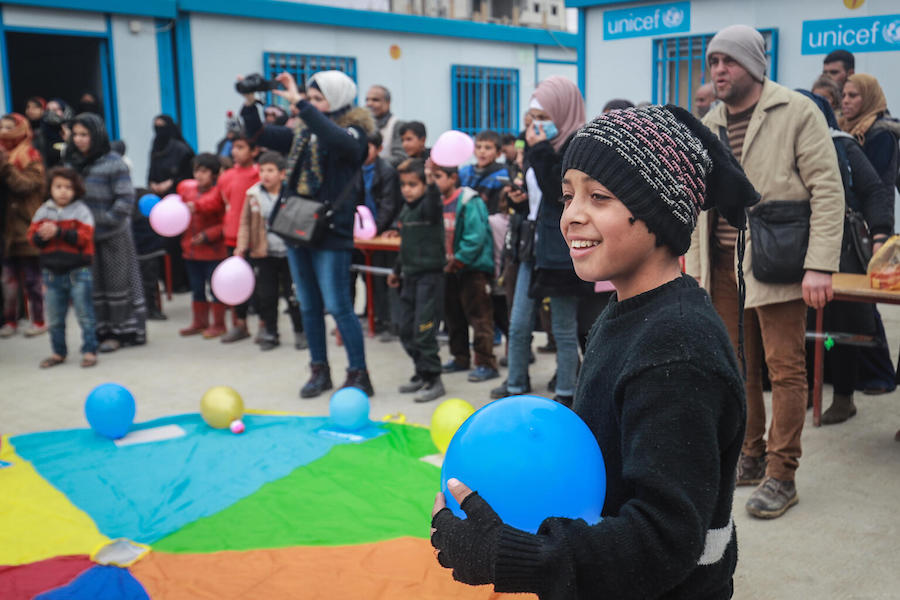 Eleven-year-old Ahmad, above, and his family are among those staying at Waleed Nofal school. “I fled my house with my family when the fighting started," he said. "People were running everywhere. I heard sounds of gunshots and a military plane. I was very scared. We were looking for a safe space and found this school.” 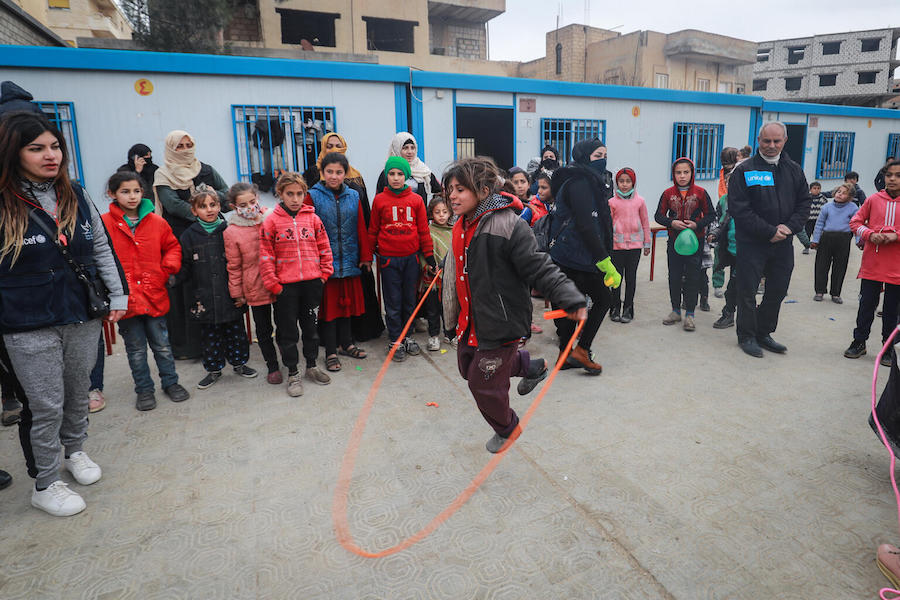 “We were really scared," said 12-year-old Rawabi, above center, who fled the Ghwayran neighborhood with her family. "My young siblings had pain in their ears because of the very loud sounds we heard. We were all crying, adults and children. This is the second time we have been displaced due to violence. We feel happy that teams come and organize activities for us but in the end, we just want to go back home." 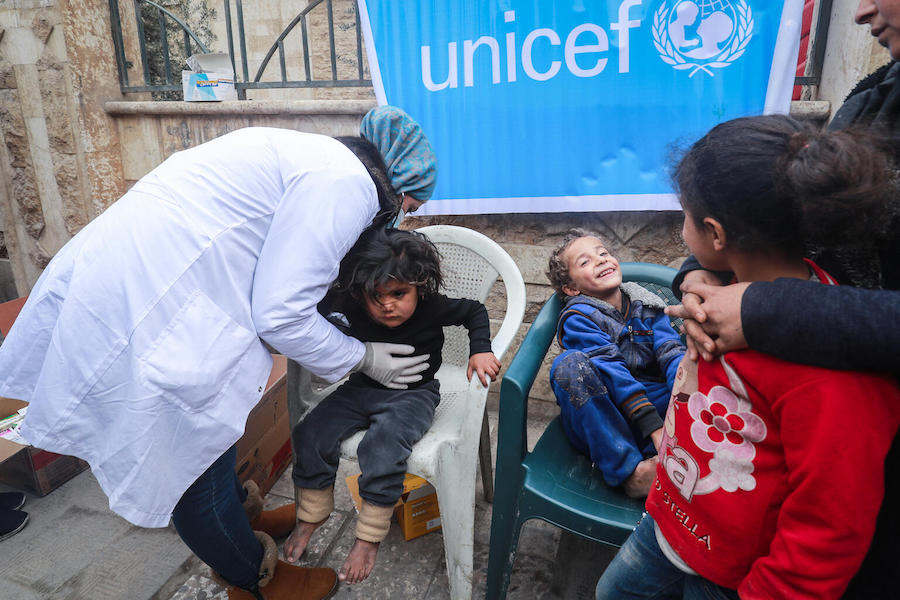 A UNICEF-supported health and nutrition mobile clinic based in Musab Bin Omair mosque, Tal Hajar, Hasakah, is delivering services and medicine to vulnerable children and their mothers. 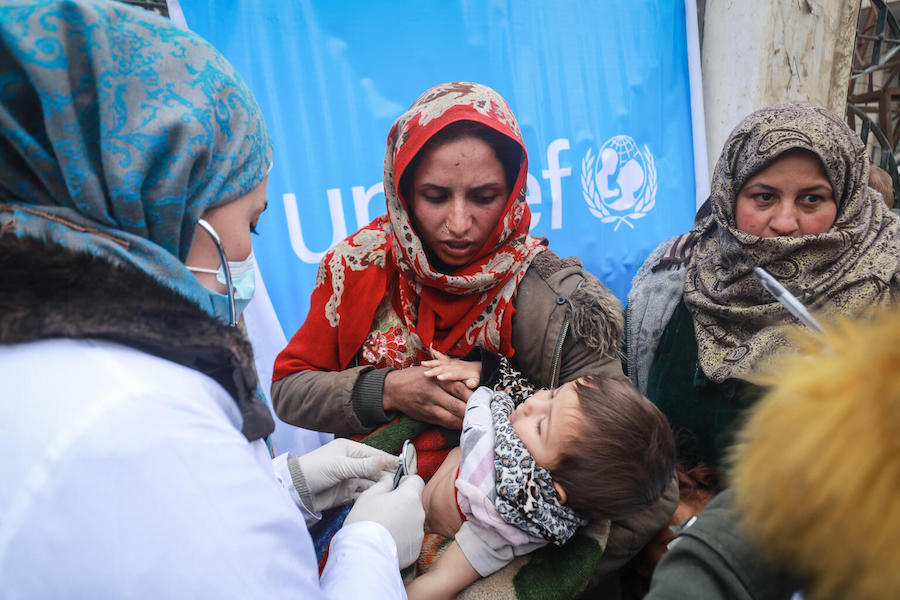 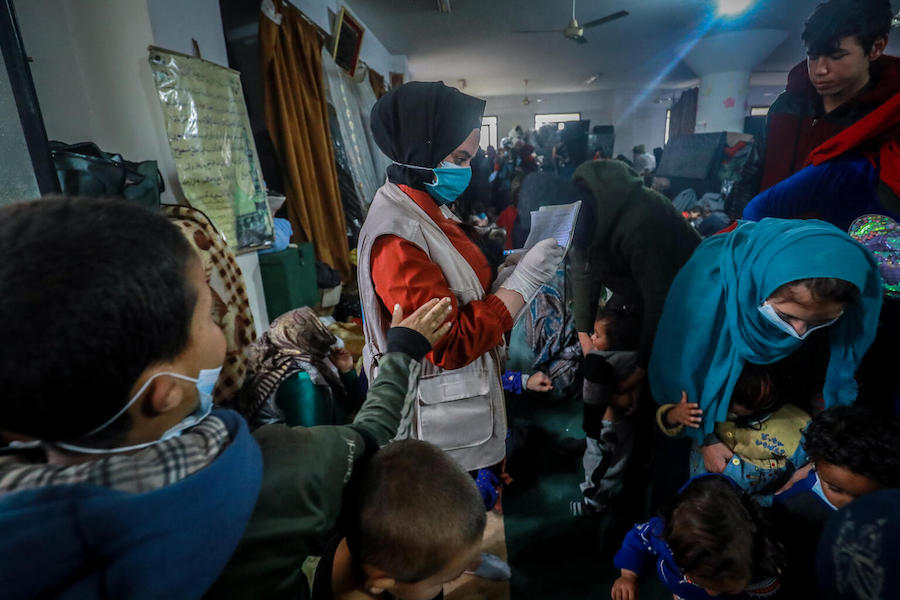 UNICEF volunteers assess the needs of newly arrived families and refer them to services at Musab Bin Omair mosque. 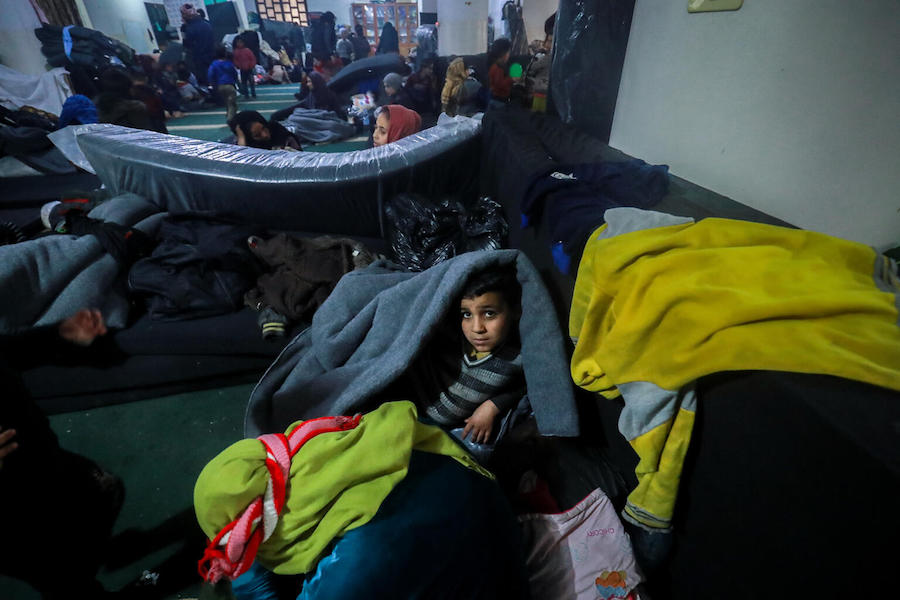 Some 120 displaced families are staying at Musab Bin Omair mosque. UNICEF is providing information to families on how to prevent separation and how to access psychosocial support for children and caregivers. To date, nine separated and unaccompanied children have been identified and are being cared for. They became separated from their families along the way and do not know where their parents are. 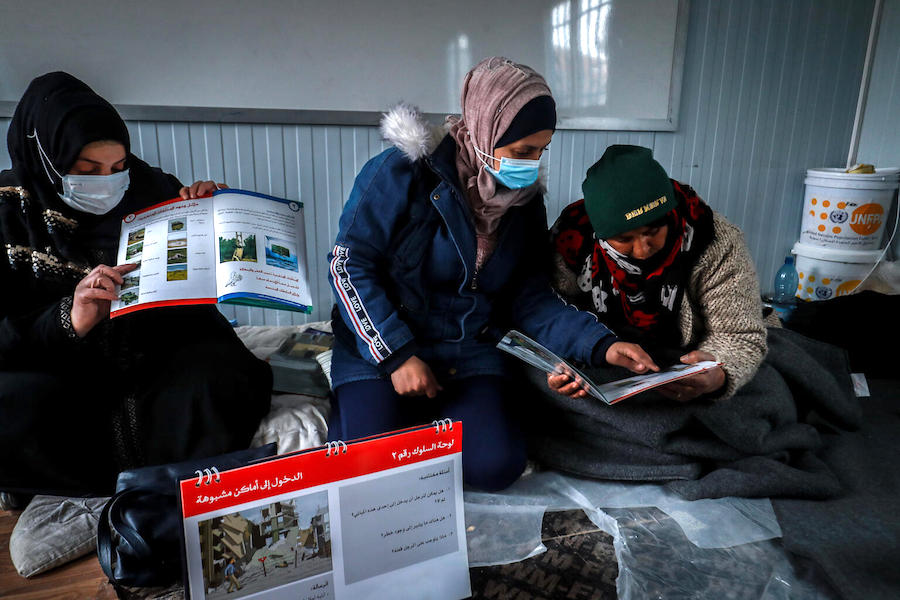 UNICEF-supported teams are also distributing materials on the risks of explosive ordnance to raise awareness among boys and girls in the shelters and keep them safe. 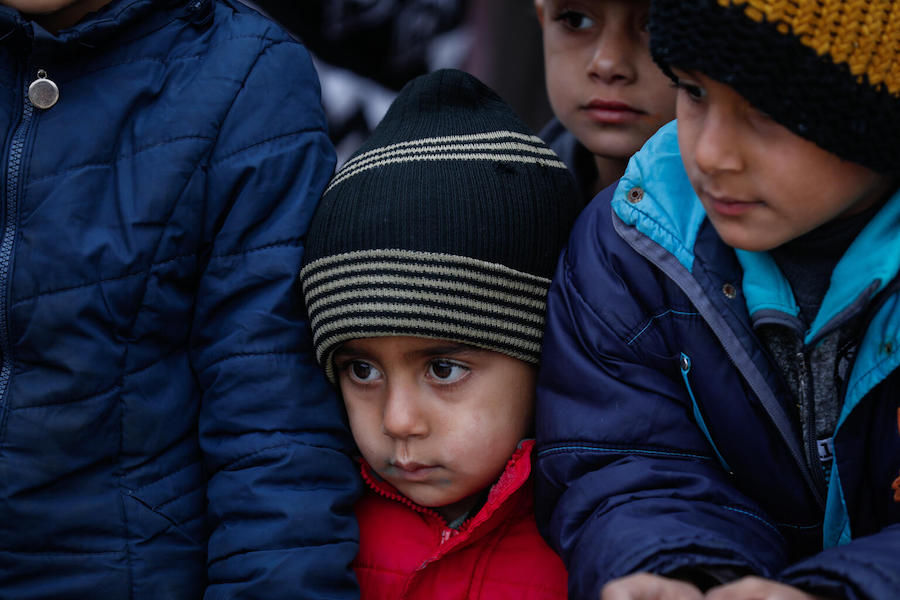 “Children in shelters were frightened after the horrors they witnessed," said UNICEF Syria Representative Bo Viktor Nylund. "Families told us children were having nightmares and bedwetting. It has been a harrowing experience for them, and it is clear they urgently need protection and assistance.” UNICEF continues to call on all parties in northeast Syria to protect children at all times, and calls once again for the immediate release of the children in the detention facility and unimpeded access to them for emergency care and assistance.

You can help UNICEF respond to the needs of children caught up in Syria's humanitarian crisis. Please donate.

Top photo: Internally displaced mothers and their children line up in front of the UNICEF -supported health and nutrition mobile clinic at Musab Bin Omair mosque, Tal Hajar, Hasakah, northeast Syria on January 27, 2022. Some 45,000 people, mostly women and children, have been forced out of their homes by intense fighting in the area. All photos © UNICEF Syria