Two years after Hurricane Maria, money raised by UNICEF Trick-or-Treaters is planting the seeds for a better future for kids in Puerto Rico.

Every Halloween, UNICEF USA puts out the call and children, families and educators across the country answer. The Trick-or-Treat for UNICEF box has become an enduring symbol of hope and compassion in difficult times. This was especially true in October 2017, when Puerto Rico was still reeling from Hurricane Maria.

The third costliest hurricane in U.S. history, Hurricane Maria took thousands of lives and left millions without power or safe water. Seeing devastation across the island, UNICEF USA asked Trick-or-Treaters to step up and fundraise around our emergency response. Of course they delivered, raising hundreds of thousands of dollars to support our local partners on the ground.

Today, we continue to see the impact of these efforts. From rebuilding homes in coordination with New York Governor Andrew Cuomo's office to restoring damaged baseball fields with LISC, we've been proud to play a part in supporting these projects and helping resilient Puerto Rican communities return to normalcy. 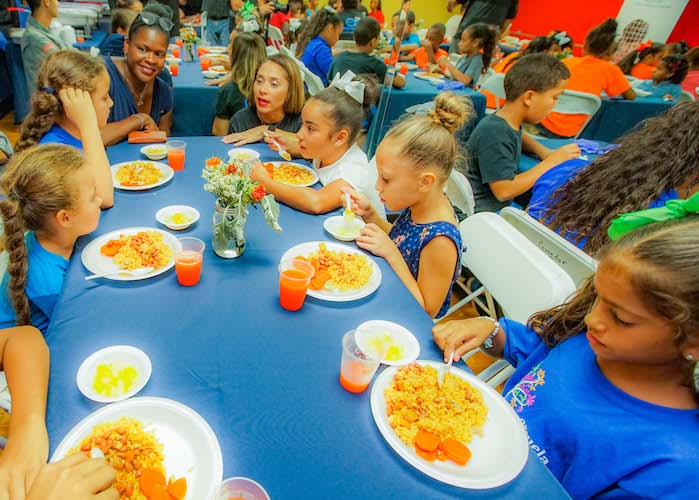 Also playing a major role in the recovery, the Boys and Girls Clubs of Puerto Rico (BGCPR) provides a safe space for kids and daily healthy meals through a UNICEF USA-supported nutrition program. We visited several clubs in September 2018 after their new kitchens had just opened. More than 200,000 meals served and one school year later, the benefits have extended way beyond the dining hall.

"I can see what a difference it makes," says Olga Ramos, President of BGCPR. "Our kids come here after school to find a safe place in our club." According to Ramos, after the nutrition program was implemented, BGCPR saw an immediate spike in attendance. BGCPR's 12 locations will serve 1,700 kids this school year, offering a healthy dinner every week night and a sense of stability. "We were able to really confirm that there is a need for this program, because when the food is there, everything is in order," says Ramos.

In the garden and in the kitchen, kids find new opportunities to learn 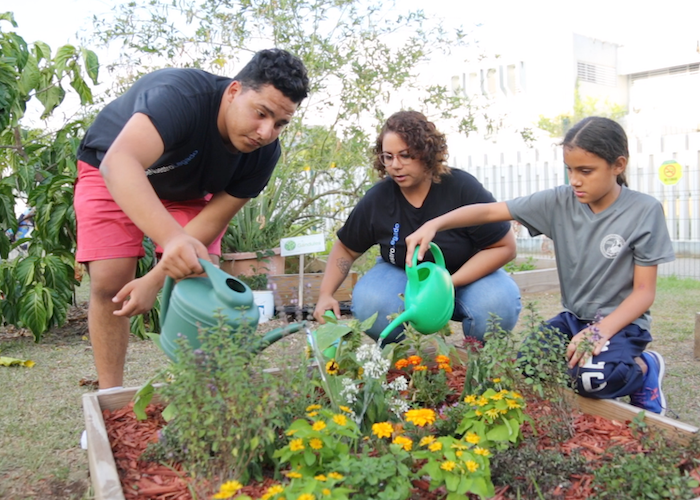 Another element of the nutrition programs: community gardens. There are currently two club gardens up and running — with plans for ten more — and early harvests have included eggplants, tomatoes, rosemary and thyme. "We're creating sustainable gardens to teach kids about where their food actually comes from," says Stephanie Ortiz, BGCPR's Food Program Manager. "The curriculum focuses not only on food, nutrition and stability, but also on how food goes from the garden to the kitchen." It's a learning opportunity many of the club's members living in the city might not normally have."

The gardens underscore another strength of the program that has emerged in the past year: the chefs. All 8 of them play a role not just preparing the food, but also teaching the kids about nutrition and healthy eating habits. "They have become an essential part of our club, and it's amazing to see how the kids interact with them," says Ramos.

"We're seeing mentoring relationships develop between the chefs and the kids," says Ortiz. "It's been a really good complement to our normal offering in the clubs." Each chef involves kids in different aspects of the kitchen, from meal preparation to clean-up. For some of the older kids, this exposure leads to new professional aspirations and opportunities. "Four or five students have graduated from our club in Isabella and gone to hospitality schools here in Puerto Rico. That's a great milestone that we've achieved for our population of children, who don't all necessarily go to college."

Discovering a joy for cooking — and a possible career path

Bryan, 17, is excited about the culinary arts. After being introduced to BGCPR by a friend, it wasn't long before he discovered a new passion. "When I was looking for something in the club, I would stop by the kitchen and I started helping out," he says. "That's how I found that I like cooking." He's particularly fond of sautéing vegetables and hopes to learn how to make pasta from scratch.

Chef David Ortiz has enjoyed teaching Bryan and other kids how to cook in the kitchen of the BGCPR in Isabela. He leads two activities a week for kids of all ages. For many of the kids, it's their first time working in a kitchen. "I think I found a great opportunity with them, to show them what to do and what it's all about," says Ortiz. "The first thing these kids are going to tell you is you need to have passion in the kitchen."

Seventeen-year-old Bryan (left) learned how much he enjoys cooking after he began working with Chef David Ortiz in the kitchen of the BGCPR in Isabela. © Boys & Girls Clubs of Puerto Rico

According to Ortiz, the club has provided a welcome distraction for kids still troubled by lasting memories of the destruction caused by Hurricane Maria. Though two storms threatened Puerto Rico this summer, the mood in the kitchen was noticeably calmer than it was during last year's hurricane season. "Kids come to the club and they feel safer," he says. "They feel like they have a place to go."

Of course, the benefits of the nutrition program extend beyond the kitchens and dining halls. As kids keep coming back, they're also able to participate in BGCPR's recreational programs. They're able to receive educational support that complements the school system. "We're trying to supply the kids' basic needs as human beings," says Ramos.

That's lasting change for years to come — made possible in part by the very change you collect whenever you Trick-or-Treat for UNICEF.

Learn more about Trick-or-Treat for UNICEF.