Thanks to a little orange box, kids can make the world a better place.

Trick-or-Treating for UNICEF has introduced generations of children to the power of social activism.

Today, 50 cents can provide one packet of Ready-to-Use Therapeutic Food to help a malnourished child recover. $2 can provide ten bars of soap to keep kids clean and healthy. $5 can provide one UNICEF backpack for a child to go to school. $7 can provide one volleyball for kids to play and learn teamwork.

But in 1947, when Trick-or-Treat for UNICEF founders Pennsylvania minister Clyde Allison and his schoolteacher wife, Mary Emma, started the movement, a dime was all it took to buy 50 glasses of milk for Europe's hungry children. Whether they're friendly lions, astronauts, or firefighters, all UNICEF Trick-or-Treaters are kids who help kids.

How it all began

The idea: Halloween could be more than just a day for kids to overindulge on candy. In 1947 — less than a year after UNICEF's founding — the Reverend Clyde Allison, and his wife Mary Emma were handing out sweets to an endless parade of trick-or-treaters. The spectacle triggered conflicting emotions, as it still does among parents today.

The following year, the Allisons had their children trick-or-treating for clothing, soap and other goods for post-World War II relief efforts in Europe. But after the Halloween of 1949, the charity leading that effort disbanded. Suddenly, the Allisons had nowhere to direct their donations.

The encounter: One day, Mary Emma spotted a cow leading a parade of children down one of Philadelphia’s main downtown streets. The destination? A booth collecting donations to support UNICEF. Mary Emma knew a perfect fit when she saw one. 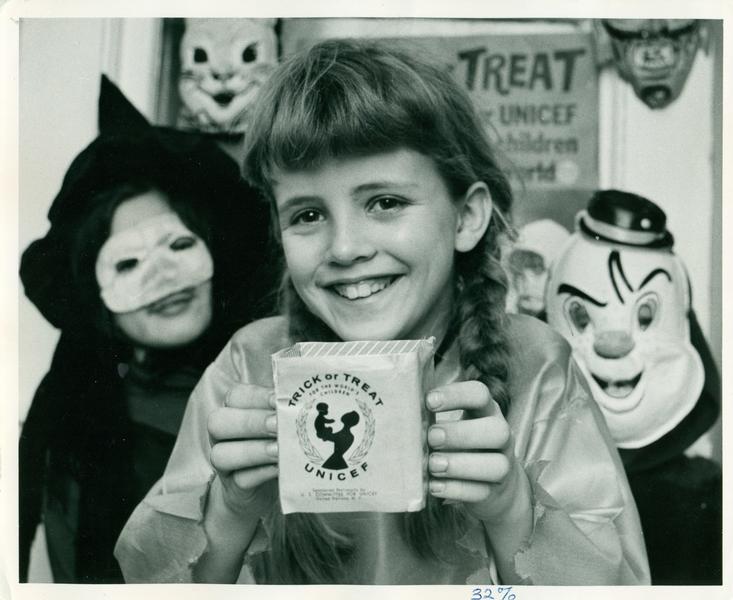 The Trick-or-Treat for UNICEF box may change from year to year, but one thing doesn't: Kids are always looking for a way to help others.

"UNICEF has caught the imagination of our people, especially our nation's children ..." — President John F. Kennedy

It was an aha moment with far-reaching effects. That next Halloween, the Allisons’ children and friends collected coins for UNICEF in hand-painted milk cartons.  Trick-or-Treat for UNICEF was born.

Soon “Trick-or-Treat for UNICEF” was an annual chorus heard in the U.S. and overseas as countries like Canada, France, Japan, Spain and the Philippines embraced the initiative, and partners like Key Club International and the entire Kiwanis family began supporting the campaign. 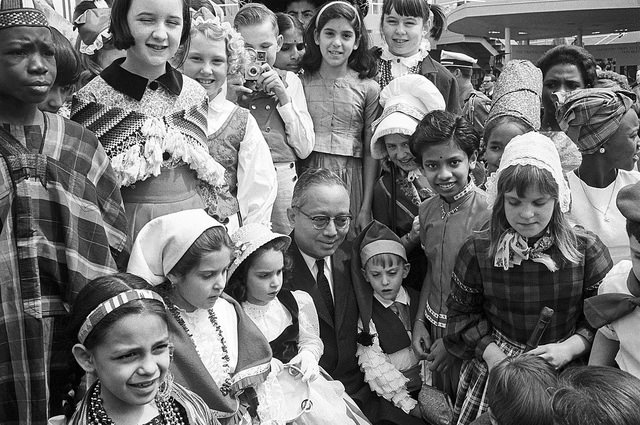 “For generations of Americans, Trick-or-Treat for UNICEF has offered the first opportunity to support a global cause.” — UNICEF USA President & CEO Caryl M. Stern

UNICEF fast became part of American pop culture. Past Trick-or-Treat for UNICEF promoters have included Lassie, Kermit the Frog, Scooby Doo and the characters from Peanuts and Goosebumps.

Throughout the decades, it seems everyone, from former U.S. Ambassador to the United Nations Susan Rice to former First Daughter Jenna Bush Hager, has carried the little orange box. It's cropped up on TV classics like The Brady Bunch and Bewitched. Last year, the classic Trick-or-Treat box joined forces with another American favorite, Sony Pictures Entertainment’s “Goosebumps 2’s” very own Slappy.

Stern added, “This fall, we’re inviting teachers to inspire the next generation of global citizens by teaching their students the fundamental value of helping others.”

"For over 60 years, young people have helped other kids by trick-or-treating for UNICEF. It's an American tradition." Learn more about Trick-or-Treat for UNICEF's history in this video.

Thanks to all that support and their own commitment, Trick-or-Treaters have brought meaningful purpose to Halloween by asking for something far more imporant than candy as they go door to door.

“I often ask myself if kids can really change the world or if it’s just the kids in books and movies,” said Georgia, a student at a school in Minneapolis. "Now my answer is yes. Since I saw many kids donate to UNICEF, I have proof that kids can change the world.”

For parents and teachers, Trick-or-Treat for UNICEF is a time-tested tool to teach kids the value of helping others, while shaping the next generation of global citizens.

Dr. Gulshan Harjee, an Atlanta teacher who benefited from the UNICEF vaccine program while growing up in Tanzania, explained: “It was first nature to give something back when I had a chance. Trick-or-Treat for UNICEF gives our kids the message that everyone has the opportunity to help others.” 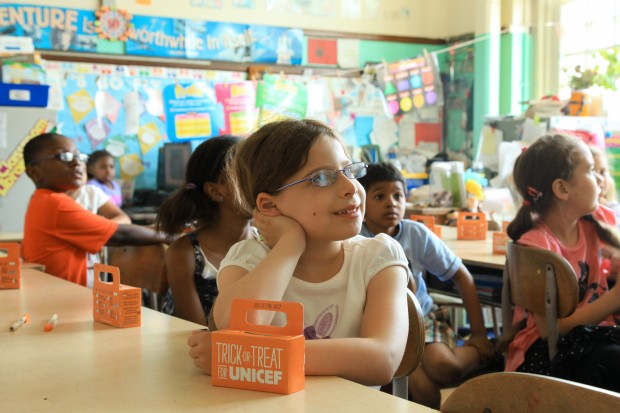 Kids whose classrooms Trick-or-Treat for UNICEF get valuable lessons in what it is to be a global citizen.

As Trick-or-Treat for UNICEF continues through its seventh decade, its reasons for being remain constant; make Halloween meaningful as well as fun, protect the lives of the world's youngest and most vulnerable, and inspire kids to discover their own ability to help other children like themselves.