This summer, UNICEF USA teamed up with the State of New York to spearhead post-Hurricane Maria recovery efforts.

With support from UNICEF USA, teams of student volunteers from New York were in Puerto Rico this summer helping to repair homes that were damaged during Hurricane Maria.

The rebuilding was part of UNICEF USA's ongoing recovery assistance efforts launched in the wake of the storm, which ravaged the island over two days last September, destroying buildings, flooding roads and knocking out the power grid. An estimated 1 million people were left without safe drinking water. In the immediate aftermath, UNICEF USA coordinated with UPS and other partners on the ground to deliver clean water and emergency supplies to affected families. UNICEF USA's Bridge Fund provided the funding needed to support a swift response. 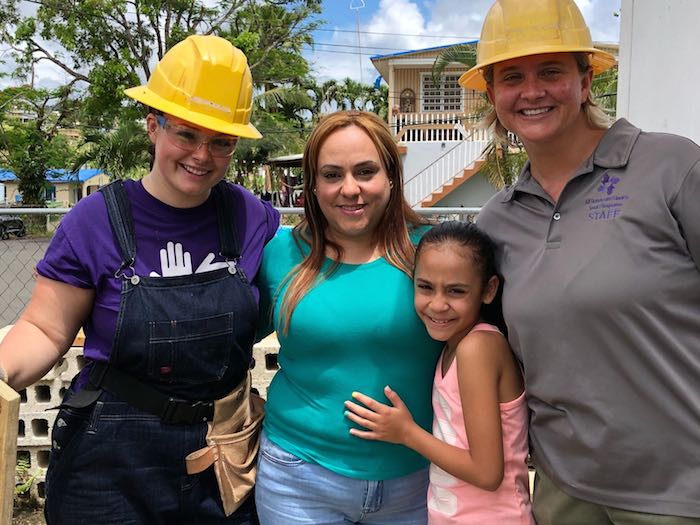 Nine-year-old Sofia and her mother were on site to see the volunteers' hard work come together. Soon, they'll have a new roof. © Edison Sabala for UNICEF USA

Every year, UNICEF responds to more than 250 emergencies—from conflicts to natural disasters. Read more about how UNICEF works in emergencies.

One of the main tasks the students helped out with: roof replacement and reinforcement. The Andelis family, for example, got a new roof for their home in Isla Verde near San Juan. "Things are bad in Puerto Rico, but I'm very thankful that the students are here helping," says Yovany Andelis, a father of two. 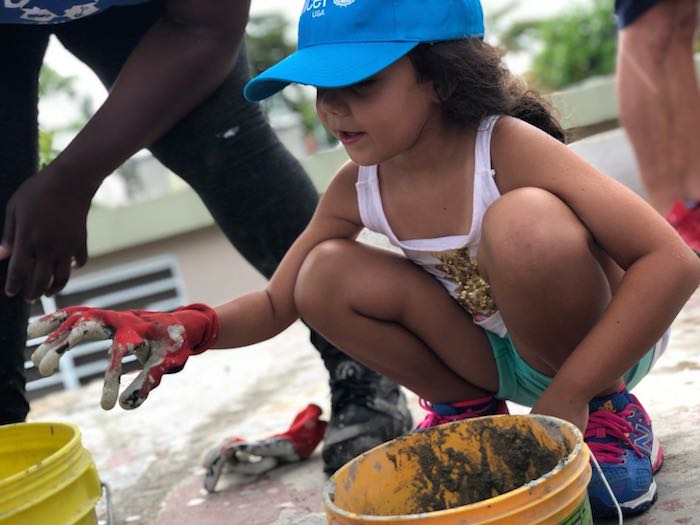 When 6-year-old Kayli learned about the effort, she asked if she could help. Her father, Guillermo, accompanied her to Guaynabo so she could work side by side with the students.

Angel, 11, and Jodalis, 13, live in Barrangquitas. When Hurricane Maria ripped the roof off the family's two-story home, they lost everything that was on the second floor. Now their home has a new roof — which, without help from UNICEF USA and the students and other volunteers, the kids' mother Adaliz says they would not have been able to afford. 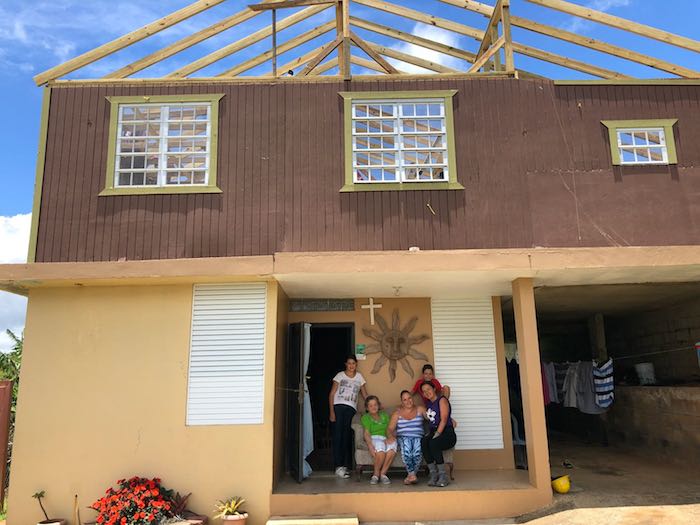 A roof mid-construction. Thanks to a UNICEF USA-supported hurricane recovery program in partnership with New York state, this family's home in Barranquitas, Puerto Rico, was repaired. "If it were not for the help of UNICEF and these students and volunteers," says Adaliz, mother of two, "we would not have been able to afford a new roof." © Edison Sabala for UNICEF USA

Teams of a couple dozen or more spent two weeks each on the job, embedded with one of three nonprofit partners who are already active on the ground: All Hands and Hearts — Smart Response, Nechama and Heart 9/11. 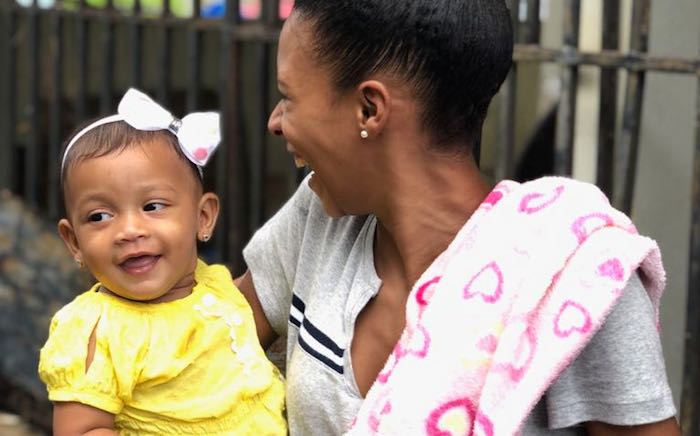 College student volunteers from New York helped to replace the roof that blew off of the Andelis family home in Puerto Rico during Hurricane Maria. Two members of the family are pictured above: 9-month-old Yovanieli and her mother, Gloria Marie, 21. © Edison Sabala for UNICEF USA

Students said the experience has been deeply fulfilling. "It's been an enlightening, self-affirming experience for sure," said Sadie Foster, 25, a student at City University of New York. Brooklyn College student Jonathan Cabral, 24, pointed to his grandmother as his inspiration. "She lives alone with her sister in the Dominican Republic. If something similar happened there, I would want others to help," he said.

"As a New Yorker and a child of Jamaican immigrants, I felt drawn to come help," said Oneika Pryce, a 19-year-old student at The City College of New York and one of the first to participate in the effort. "Being here has really opened my eyes to Puerto Rico's strength, resilience and rich culture. It is truly an honor to be a part of this experience."

students and carpenters working on a roof.jpeg 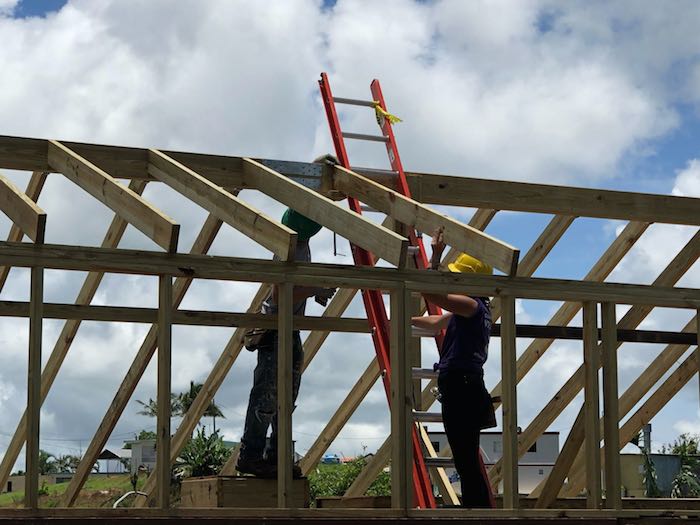 President and CEO of UNICEF USA Caryl Stern called the project empowering for young people. "It is the ultimate 'kids helping kids' solution, which is at the heart of what UNICEF is all about," Stern said.

It is the ultimate 'kids helping kids' solution, which is at the heart of what UNICEF is all about.

UNICEF USA and New York State, through the NY Stands With Puerto Rico Recovery and Rebuilding Initiative, were co-funders of the deployment, which concluded last month. A total of 500 student volunteers and 20 skilled labor volunteers participated. 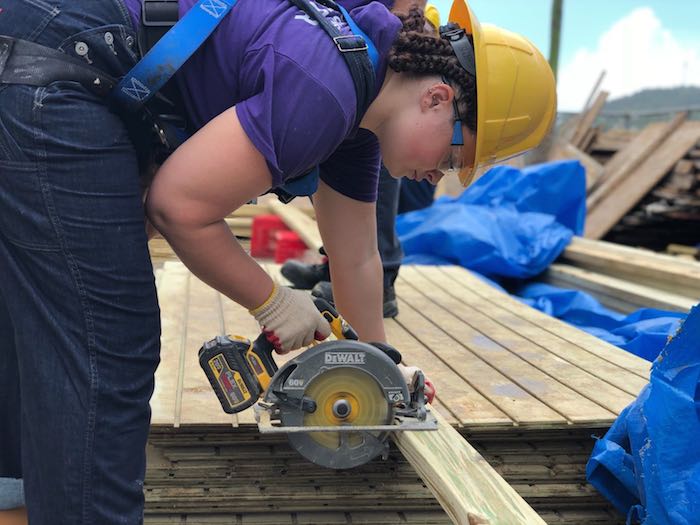 CUNY student Sadie Foster was one of 500 college students volunteering in Puerto Rico this summer to help repair roofs on homes damaged during Hurricane Maria as part of a UNICEF USA-supported recovery effort in partnership with New York State. © Edison Sabala for UNICEF USA