Ramadan in War-torn Yemen: Hoping for Better Days Ahead

With two-thirds of the country food insecure, observing the holy month is no simple matter. UNICEF is there to help.

Throughout the Muslim world, the holy month of Ramadan is a time for fasting and reflection during the day and getting together with family for a celebratory meal at night. But four years of brutal civil war have pushed Yemen to the brink of collapse. Food prices have jumped by 150 percent since the conflict began, leaving two-thirds of the population food insecure. More than 24 million people are in need of humanitarian assistance — including more than 11 million children.

Instead of resting in the daytime during Ramadan, many parents must spend their days searching for food to feed their family at night.

We fast in the daytime and starve in the night.

"I am exhausted and thirsty because of walking, and I have been fasting without a good breakfast," a tearful mother in Sana'a told a reporter for Al Jazeera in 2017. "I used to live with dignity in my house, and Ramadan was my best month. The war has deprived us of joy every day. Last Ramadan was fine, but this one is very tough. We fast in the daytime and starve in the night."

Yemen's youngest children have no memory of a time before the violence began. Fear and uncertainty have become a way of life. With millions facing hunger, many may wonder: What is there to celebrate? 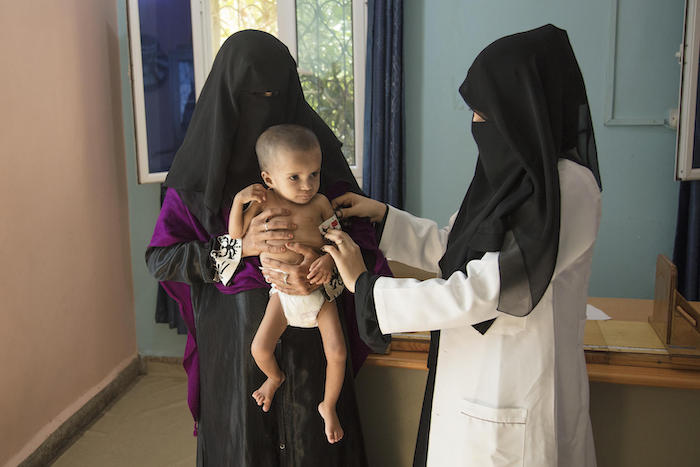 The civil war has left two-thirds of Yemen's population without enough to eat. Worried parents bring their malnourished children to a UNICEF-supported therapeutic nutrition center in Hudaydah, Yemen. © UNICEF/UN0276393/AlGhabr

And yet, despite the overwhelming difficulty of staying alive during wartime in Yemen, families will still find reason to give thanks during Ramadan. Those who have a little food to spare will give some to those who have none, and all will share their hopes for a more peaceful future.

"It is enough for me that my daughter returned to the house alive and that she smiles and laughs," said Hussein Ahmed, who shares a tiny mud house in Hudaydah governate with his mother, his wife, their six children and three other families. Four families share this tiny mud house covered in palm fronds in Hudaydah, Yemen. Every time it rains, they worry that the house may collapse. The civil war has devastated the country.  © UNICEF/UN0276394/AlGhabri

Last year, his baby daughter, Doa'a, was in critical condition, severely malnourished with complications of pneumonia and unable to breastfeed. Ahmed and his wife, Zahra Hassan Sulaiman, rushed her to a UNICEF-funded therapeutic nutrition center run by the Tayba Foundation in Hudaydah. The center provides integrated medical services for malnourished mothers and children, and an education program to help families learn how to keep their children healthy. Doa'a was severely malnourished when her parents rushed her to a UNICEF-funded therapeutic nutrition center in Hudaydah, Yemen, where doctors saved her life. © UNICEF/UN0279211/AlGhabr

"When I looked at my daugher, I was pretty sure that she would not survive, but I didn't give up," Ahmed recalled. "I borrowed money and took her to the nearest health center, one hour away by car. I was afraid she would die before we reached the health center."

Doctors at the center gave Doa'a medicine and baby formula, and nursed her back to health. For 15-year-old Mareiah, her baby sister's survival was nothing short of a miracle. "When Doa'a was discharged from the health center, I didn't believe that she was alive until I saw her."

Top photo: Fifteen-year-old Mare'ah and her family share a tiny house with three other families in Hudaydah, Yemen. Mare'ah's parents struggle to afford food for her and her five siblings. When her baby sister became severely malnourished, her parents rushed her to a UNICEF-supported therapeutic nutrition center, where doctors saved her life. © UNICEF/UN0276390/AlGhabri