Baby Sofia is just a day old. She was born in Sumy, northeastern Ukraine, as air raid sirens wailed in the background. Now, against all odds, she sleeps quietly in a special portable incubator designed to keep her comfortable and maintain the temperature of her tiny body.

UNICEF has delivered 150 portable incubators* — donated by the non-profit organization Embrace Global — to hospitals in Dnipro, Sumy, Pokrovsk and other Ukrainian cities. Made with a pouch filled with a reheatable, waxlike phase-change material tucked inside a little sleeping bag, the lightweight, easy-to-use infant warmers maintain a newborn’s temperature at 98 degrees Fahrenheit for up to eight hours. Unlike traditional incubators, the warmers work without electricity, which is crucial during air raid evacuations. 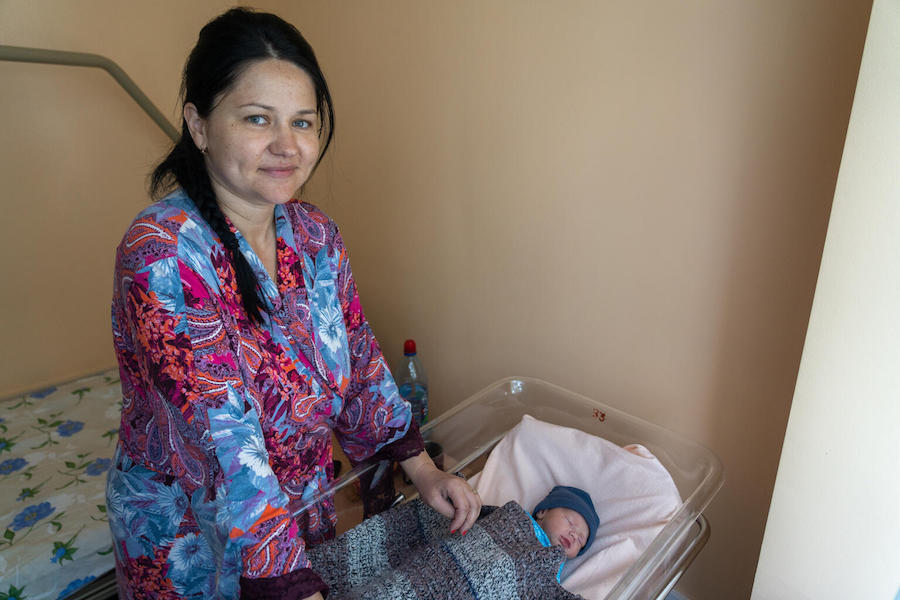 “Thanks to God and the doctors, I made it,” says 35-year-old Yulia, Sofia's mother, above. “It's a girl, and people keep saying it's a good sign, meaning that peace is going to come. I hope for that so much.”

Yulia is grateful that her baby is able to sleep peacefully despite the difficult preterm delivery. She spent weeks before the birth sheltering in a dark, damp basement, surrounded by the sounds of planes and gunfire.

“Please stay inside, it's safer," was all she could say to her unborn daughter, as she prayed that the planes flying overhead did not drop a bomb on their city. 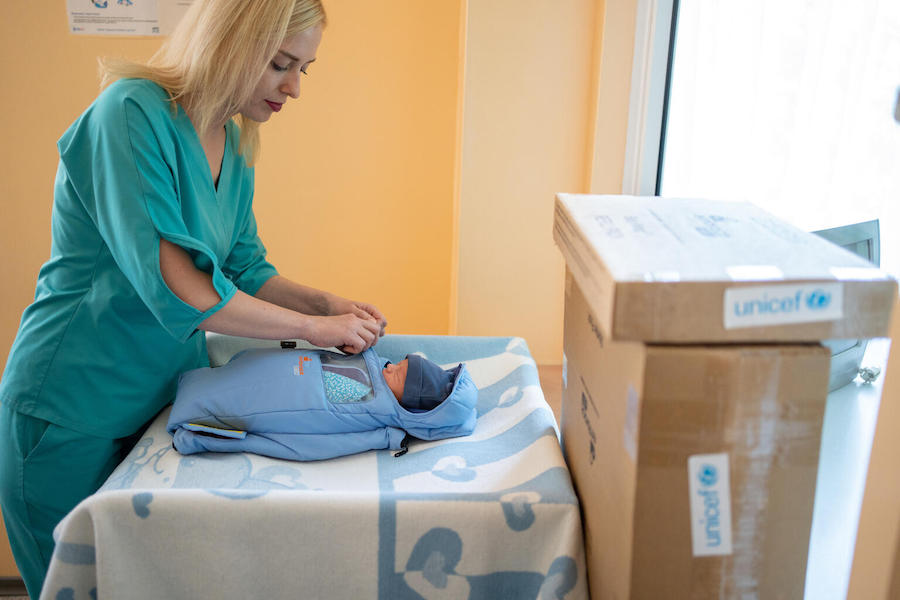 One night, Yulia heard the news that Mariupol’s maternity hospital had been hit in an airstrike, killing scores of pregnant women.

“When I got pregnant, I was so happy, because we had spent ten years trying,” says Yulia. “And when the war came to Ukraine, I started panicking.

"I wasn't afraid for myself. The only thing I kept thinking about was, where I should be hiding to protect my child and the dream I had been looking forward to for such a long time.”

As the shelling continued, Yulia feared that maternity hospitals and ambulances in Sumy would suffer a similar fate. So she began searching for information about home births. 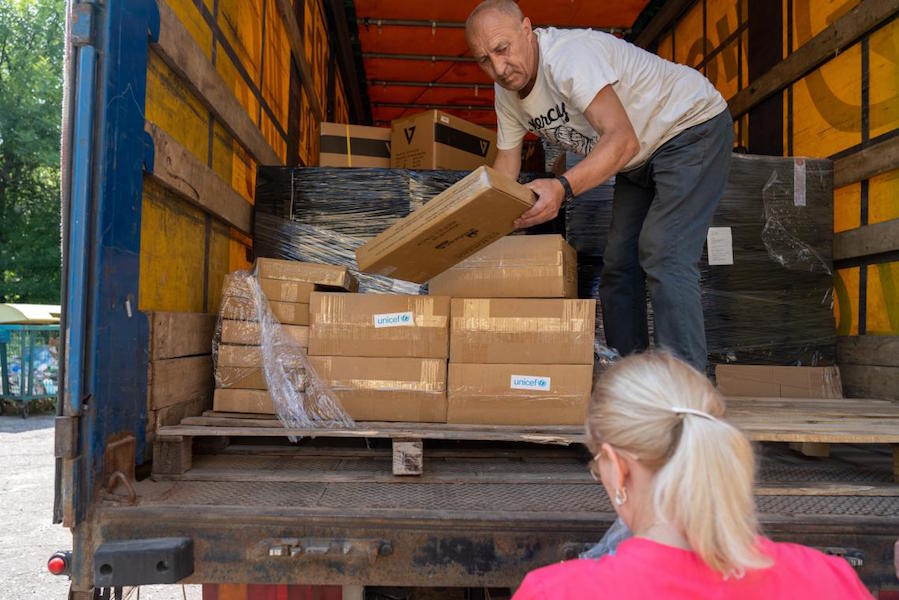 'I want a normal childhood for my baby'

“I was four or five months pregnant and my bump started to show, so I felt very uncomfortable in the basement,” she recalls. “And all my worries led to preterm delivery.” Doctors delivered Sofia one month early at the Sumy Regional Perinatal Center.

Now Yulia's daughter needs a special temperature regimen – and peace in her country, her mother says.

“I've been missing peaceful times,” Yulia says. “I can't even fully enjoy the euphoria of giving birth. I hope I'll be able to walk with a stroller soon, instead of running back and forth to basements and bomb shelters. I want a normal childhood for my baby.” 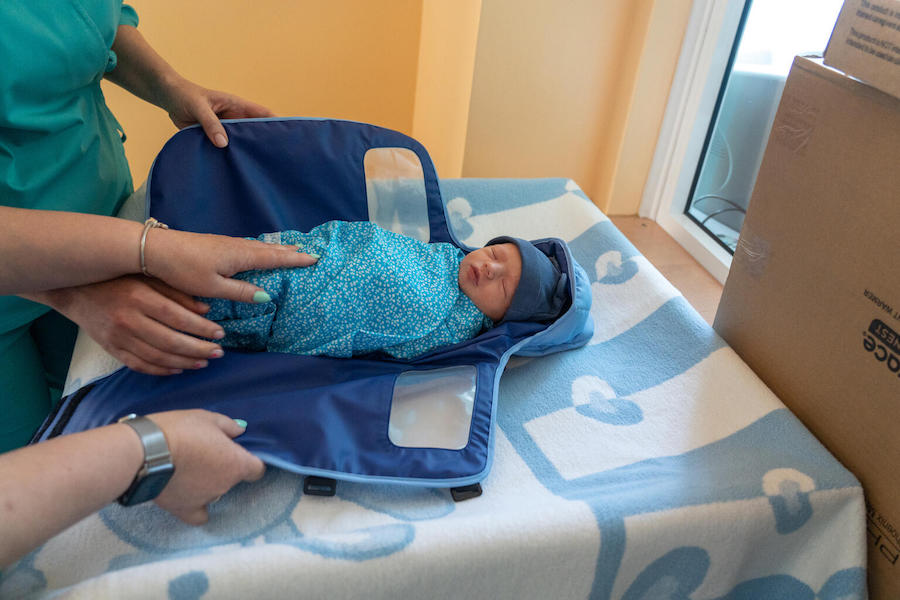 'We have to react fast'

When the war first escalated in Ukraine in February, there were four preemies in Sumy's neonatal intensive care unit. One weighed less than two pounds. During air raids and shelling, doctors would wrap the children in blankets to keep them warm as they hid in the hospital’s cold bomb shelter. Because it was impossible to move their large stationary ventilators down into the shelter, sometimes the medics had to ventilate children's lungs with their hands. 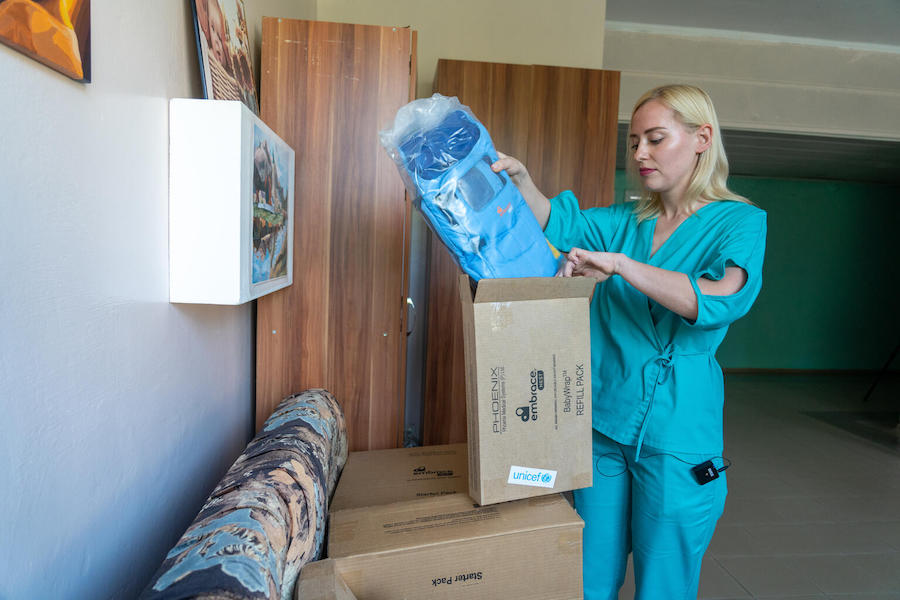 “We had to rescue children and provide them with safe conditions,” Yankovska says. “Unfortunately, our shelter is not suitable for receiving children. That's why we had to do our job without any devices, and do everything manually.”

Since February, 180 babies have been born at the Sumy center; 21 were premature. Doctors say the portable infant warmers will save countless young lives.

“The most difficult thing about this war is the fact that we, doctors, are responsible not only for ourselves — we don't worry about ourselves that much — but also for women and babies,” says Yankovska. “We have to react fast.”

Humanitarian needs in Ukraine are multiplying as the violence continues. UNICEF is working to protect the most vulnerable. Your contribution can make a difference. Please donate.

*UNICEF does not endorse any company, brand, product or service.

Top photo: Born one month early in northeastern Ukraine, baby Sofia sleeps peacefully in the Sumy Regional Perinatal Center. Portable incubators delivered by UNICEF to hospitals across Ukraine are keeping infants like Sofia alive. Donated by Embrace Global, a nonprofit organization, the lightweight, easy-to-use warmers help fragile newborns maintain their body temperature, even when they need to be carried to basement bomb shelters during air raids. © All photos by Aleksey Filippov for UNICEF.