More Children Than Ever Need UNICEF's Support — and Yours

In 2020, through no fault of their own, 59 million children will require humanitarian assistance. "Around the world today, we're seeing the largest number of children in need of emergency assistance since we began record keeping," said UNICEF Executive Director Henrietta Fore. "Historic numbers of children forcibly uprooted from their homes urgently require protection and support. Conflict remains the major driver while hunger, infectious disease and extreme weather events related to climate change force millions of others to seek lifesaving aid."

In the first 8 months of 2019, UNICEF and partners provided humanitarian assistance for nearly 29 million children caught in crises around the world

Thanks to generous donor funding in 2019, UNICEF and partners have responded to emergencies in 61 countries and provided humanitarian assistance to nearly 29 million children in the first eight months of the year — substantially on track to reach the target of 53 million by December 31, despite funding shortfalls. 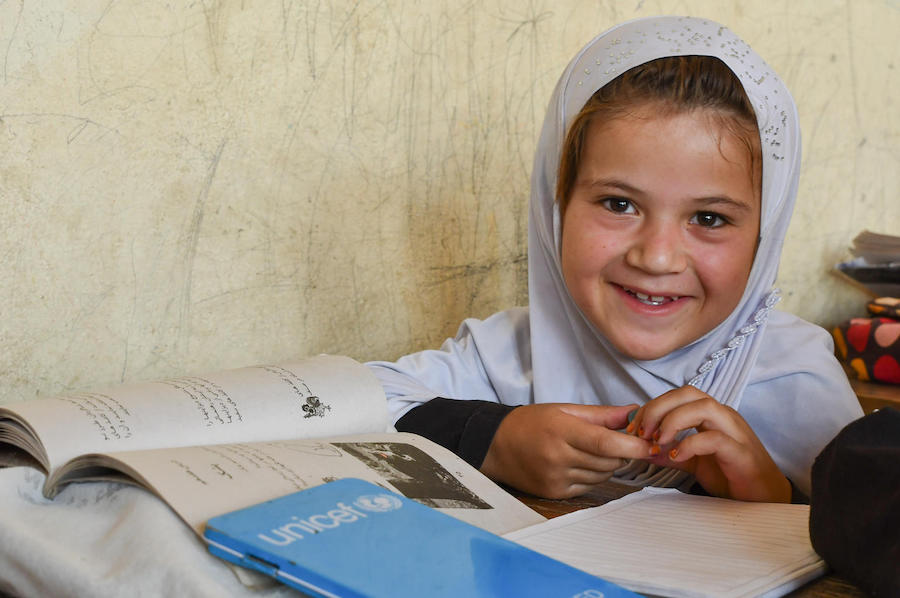 Sharzad, 7, a student at Turgani High School in Faizabad, Afghanistan, wants to be a teacher when she grows up.  © UNICEF/UNI205857/Karimi

Reaching the growing number of children affected by crises worldwide requires additional funding that is also flexible — in other words, not tied to a specific country or issue. Flexible funding enables UNICEF to intervene quickly whenever and wherever needs arise, Fore explained. It allows UNICEF "to provide children with support from the moment disaster hits, until they can get back to their normal lives. Flexible funding helps us save more lives and protect more futures."

Across the globe today, one in four children lives in a country affected by conflict or natural disaster. UNICEF's 2020 Humanitarian Action for Children funding appeal details the amounts needed to reach 59 million children in 64 countries with lifesaving support in the coming year: a total of $4.2 billion — 3.5 times the funds requested in 2010.

Below, a look at how UNICEF programs improved the lives of vulnerable children in the first eight months of 2019, and a preview of how that impact will continue in 2020 — with crucial support from donors like you. All children have the right to an education and the opportunity to reach their full potential. That includes children living through conflict and natural disaster, who need to get back to learning as soon as possible. Going the distance to fight measles

The number of measles cases continued to rise in 2019 — large, often extended outbreaks of the extremely contagious disease were reported around the world. UNICEF vaccinated 28.9 million children against measles in 2019, going wherever children are at risk. In 2020, UNICEF aims to immunize 8.5 million children from measles.

Immunization is one of the most cost-effective public health interventions to date: UNICEF provides vaccines to nearly half the world's children, saving an estimated 2 to 3 million kids from life-threatening diseases every year. A child sits on her mother's lap in the stabilization center for severely malnourished children at UNICEF-supported Al-Sabah Hospital in Juba, South Sudan. High levels of food insecurity in South Sudan leave many children hungry and vulnerable to disease. © UNICEF/UNI231141/Estey

Children who don't get the essential nutrients they need to grow and develop properly are faced with lifelong challenges. UNICEF is the world's largest provider of Ready-to-Use Therapeutic Food, procuring between 75 and 80 percent of the world's supply of the nutrient-rich paste used to treat children suffering from severe acute malnutrition (SAM), which can be fatal if unaddressed. Children sit in front of a house that was damaged by an air strike in Sana'a, Yemen in July. © UNICEF/UNI220712/Romenz

Emergency cash transfer programs provide dignity and choice for vulnerable families, allowing them to buy food and medicine for their children and pay for their schooling and other essentials. In 2019, UNICEF provided 850,000 people around the world with cash assistance; in 2020, that number is projected to rise to 1.7 million.

"With the money I get from the [Yemen Emergency Cash Transfer] project, I buy wheat, sugar, oil," said Fatima Hussain Al-Tayari, a 55-year-old widow and mother of five who lives outside Yemen's capital city, Sana'a. "Although the amount is not big, it still covers living and food expenses." 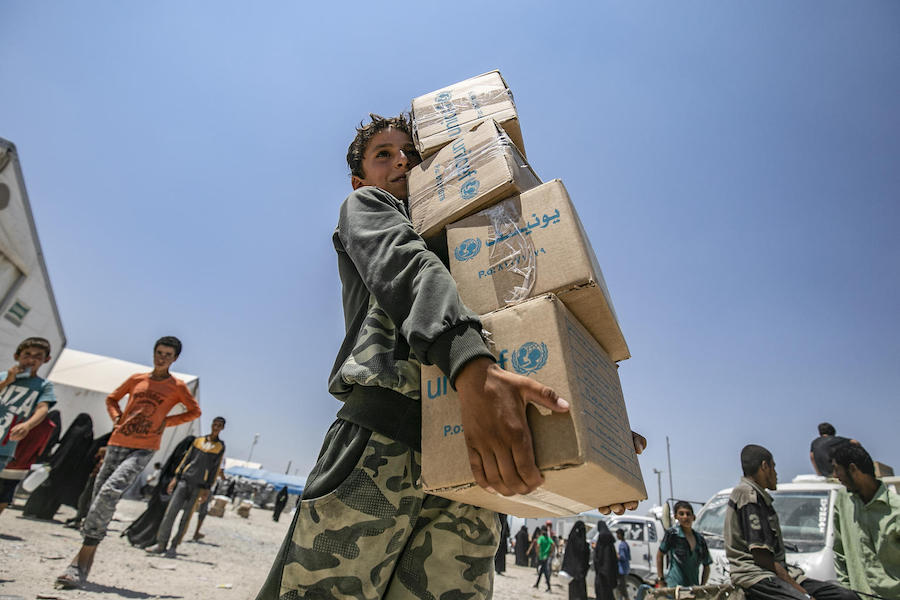 Child protection in times of conflict

Violence and insecurity rob children of their childhood and jeopardize their future. In 2019, UNICEF provided 2.6 million children and caregivers around the world with access to mental health and psychosocial support. In 2020, that figure is projected to rise to 4.5 million.

Nearly nine years of conflict in Syria have left nearly 5 million children in need and more than 2.5 million children living as refugees outside the country. UNICEF and partners work across the region to provide critical humanitarian assistance and to help children cope with the impact of war. After two devastating cyclones battered Mozambique in 2019, UNICEF worked in close coordination with the Mozambique government to repair infrastructure and restore access to essential services including safe water for more than 1.5 million people. 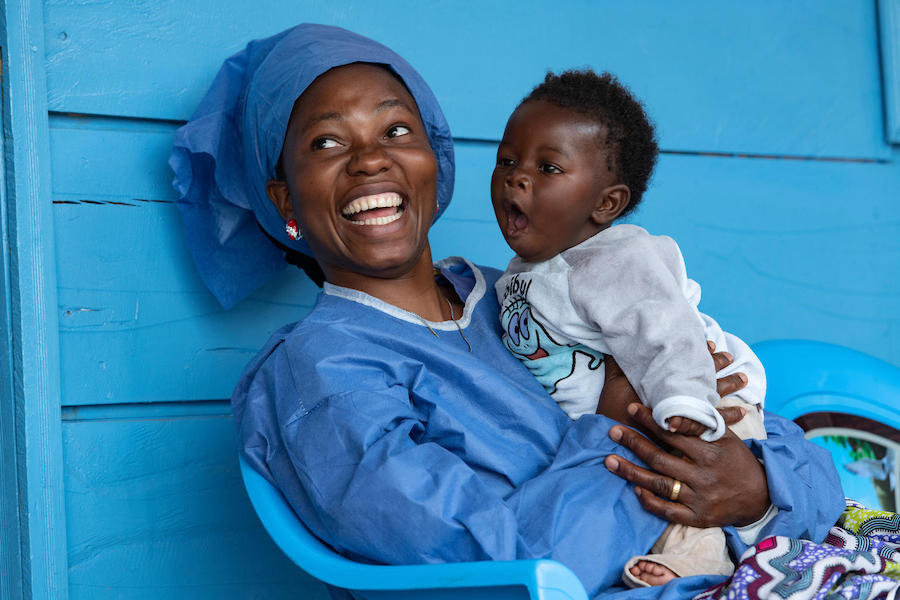 After Joniste Kahambu's 3-year-old son died of Ebola, she became a caregiver and "lullaby singer" at the UNICEF-supported nursery for babies whose parents are sick with Ebola in Butembo, Democratic Republic of the Congo. © UNICEF/UNI210752/Townsley

Health workers fighting to contain the spread of Ebola in eastern Democratic Republic of the Congo (DRC) are faced not only with attacks by armed militia groups but also fear and distrust from local communities. To protect people in the DRC and to prevent the outbreak from expanding to neighboring countries, UNICEF worked with local and religious leaders, the media and businesses across the region, launching a massive education campaign that has provided lifesaving information about the Ebola virus to more than 25 million people.

In 2020, UNICEF and partners plan to reach 49 million at-risk or affected children and adults through an array of communication for development (C4D) community engagement campaigns. Because every child has the right to grow up in a safe, healthy environment, and the right to learn and play in peace.

Your generous contribution will help UNICEF and partners save and protect children.

Note: all 2019 figures cover the first eight months of the year.

Top photo: Six-year-old Kadia is healthy, but the humanitarian crisis in Mali continues to worsen. Flexible funding from donors enabled UNICEF to respond to a dramatic increase in insecurity and displacement in the Central Sahel — Mali, Burkina Faso and the Niger — in 2019. Thanks to UNICEF Mali, partners and local nutrition support groups, the rate of chronic malnutrition among children in Mali's Sikasso region has declined from 35.5 percent in 2015 to 28.9 percent in 2019. © UNICEF/UN0342250/Keïta