UNICEF Urges All Parties to Protect Children in Syria

As violence escalates in northeastern Syria, many children are at imminent risk of injury, death and displacement.

OCTOBER 15 UPDATE:  An estimated 70,000 children have been displaced since hostilities in northeastern Syria escalated nearly a week ago. UNICEF is providing emergency assistance to children and families in 33 emergency shelters, mostly schools and unfinished buildings. UNICEF can confirm the deaths of at least 4 children, with 9 injured, in northern Syria. Seven children have reportedly been killed in Turkey.

An estimated 70,000 children have been displaced since hostilities escalated in northeastern Syria

To support internally displaced persons in the vicinity of Hasakeh, UNICEF and partners have trucked in 95,000 liters of water and installed 12 water storage tanks. Ten thousand family hygiene kits are en route to Hasakeh, to be delivered by UNICEF partner Al Yamama for distribution.

An additional 4,300 winter clothing and hygiene kits have been dispatched from Damascus to Hasakeh, with an estimated arrival of October 19. UNICEF is working with partners to deliver water to Al Hol camp, where the UNICEF-funded reverse osmosis plant remains functional to ensure access to safe drinking water.

"I urge all parties to protect children and the civilian infrastructure on which they depend, in accordance with international human rights and humanitarian law," said UNICEF Executive Director Henrietta Fore. "The use of explosive weapons in populated areas causes unacceptable harm to children." 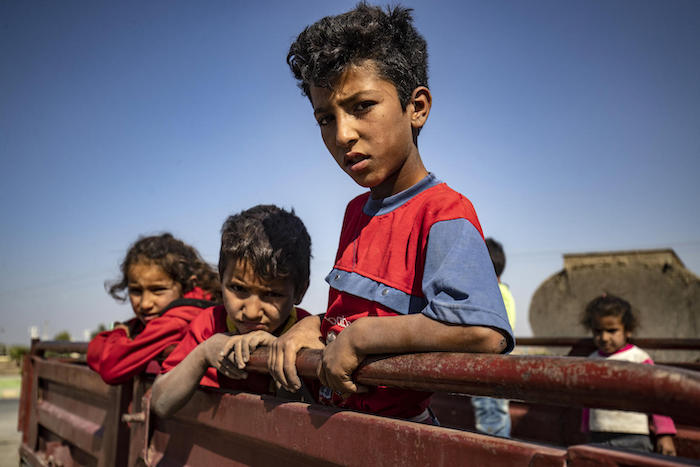 Fleeing Turkish bombardment, Syrian Arab and Kurdish civilians arrive in Tal Tamer in northwestern Syria's Hasakeh province on October 10, 2019. Syria's Kurds battled to hold off a Turkish invasion on October 9 after air strikes and shelling launched a long-threatened operation that could reshape the country and trigger a humanitarian crisis. © UNICEF/UNI214011/Souleimain/AFP-Services

Some of the displaced people are reportedly heading towards Raqqa, while the majority are heading toward other locations including Amuda, Al Derbasiya, Tal Tamer and Hasakeh. Internally displaced persons in Hssakeh city are mostly being hosted by friends, relatives and the local community, in addition to the collective shelters.

In Ras al-Ain, the Alouk water pumping station reportedly came under attack on October 10. This station provides safe water to at least 400,000 people in Hasakeh governorate, including displacement camps. Technical and operational staff have not been able to get to the water station to repair it due to ongoing hostilities. A grandmother cradles a baby near a transport of Syrian Arab and Kurdish in Tall Tamr town, in the Syrian northwestern Hasakeh province on October 10, 2019. © UNICEF/UNI214009/Souleimain/AFP-Services

In Tel Abyad, two schools have reportedly been taken over for military use. UNICEF's partners in Tel Abyad and Ras al-Ain have had to stop most of their work in the area. Many of their staff and volunteers are among the displaced population.

Many UNICEF partner staff and volunteers are among the displaced population 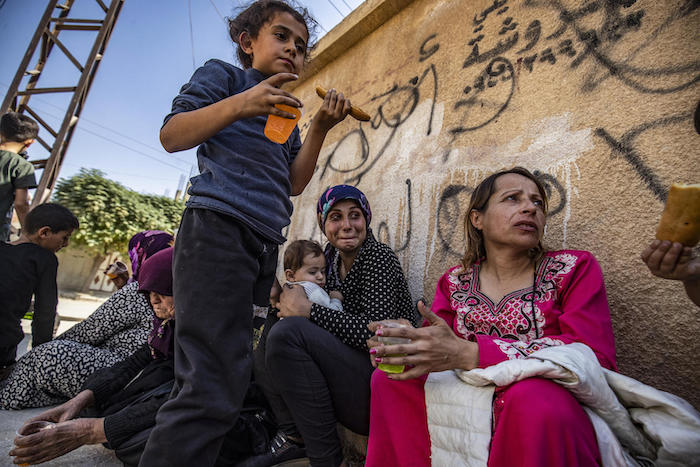 Syrian Arab and Kurdish civilians rest near a wall in Hasakeh city after fleeing Turkish bombardment on Syria's northeastern towns along the Turkish border on October 10, 2019. © UNICEF/UNI214012/Souleimain/AFP-Services

UNICEF continues to maintain a presence in Qamishli through its staff, facilitators and partners and has stockpiled health, nutrition and water, sanitation and hygiene supplies covering the needs of 45,000 children and women for one month in addition to seasonal clothes for children under the age of 5, with additional supplies in the pipeline.

UNICEF continues to maintain a presence in Qamishli and has stocked up on health, nutrition and WASH supplies

An escalation of hostilities in the area is likely to have serious consequences on the ability of humanitarian actors to provide protection and assistance to thousands of vulnerable children. UNICEF urges all parties to:

UNICEF reiterates that the only solution to the brutal conflict in Syria is a political solution. The protection of children in northeastern Syria and across the country must be prioritized at all times.

Please help UNICEF's work to save and protect vulnerable children.

Top photo: A Syrian girl cries upon her arrival in Hasakeh city after fleeing Turkish bombardment on northeastern Syrian towns along the Turkish border on October 10, 2019.© UNICEF/UNI214010/Souleimain/AFP-Services