At the End of a Tough Year, Some Reasons to Celebrate | UNICEF USA

At the End of a Tough Year, Some Reasons to Celebrate

While COVID-19 and related crises commanded the world's attention, some progress was achieved for children and families on several important fronts. Here's a look at some positive developments in 2020. 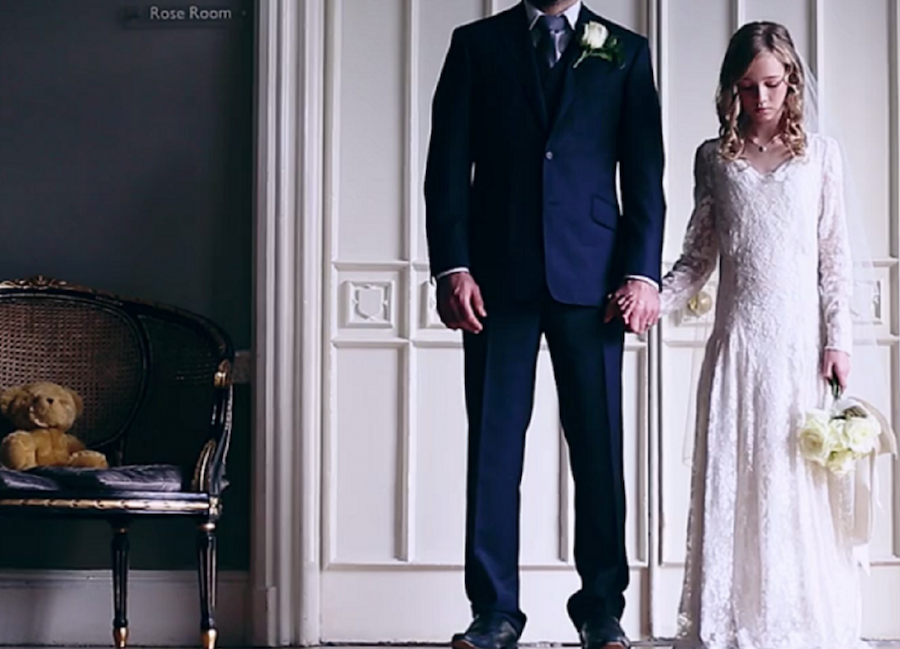 Girls and women in many communities in the U.S. are often pressured, tricked, threatened or beaten until they agree to wed. Forced marriage and child marriage are human rights violations. UNICEF and partners are working to end child marriage worldwide. © UNICEF

On May 8, 2020, Pennsylvania delivered a victory for child rights advocates everywhere by signing House Bill 360 into law, making it the third state to outlaw marriage below the age of 18 in all cases. Minnesota quickly followed suit, enacting similar legislation a few days later. Delaware and New Jersey outlawed marriage before age 18, with no exceptions, in 2018.

UNICEF USA and partner Zonta International have been at the forefront of the movement to ban the practice nationwide. UNICEF Uniters, passionate volunteers for UNICEF USA, sent hundreds of messages to state legislators in Pennsylvania and Minnesota urging legislative action, and the group continues to rally supporters.

"Child marriage often leads to forfeited education, mental illness, social isolation and serious health risks," Eric Rosario, captain of the UNICEF Unite's Philadelphia team, wrote in a recent opinion piece. "UNICEF's focus on child rights and well-being doesn't stop at the U.S. border: as global citizens, we have a responsibility to speak out on issues that affect children in this country as well." 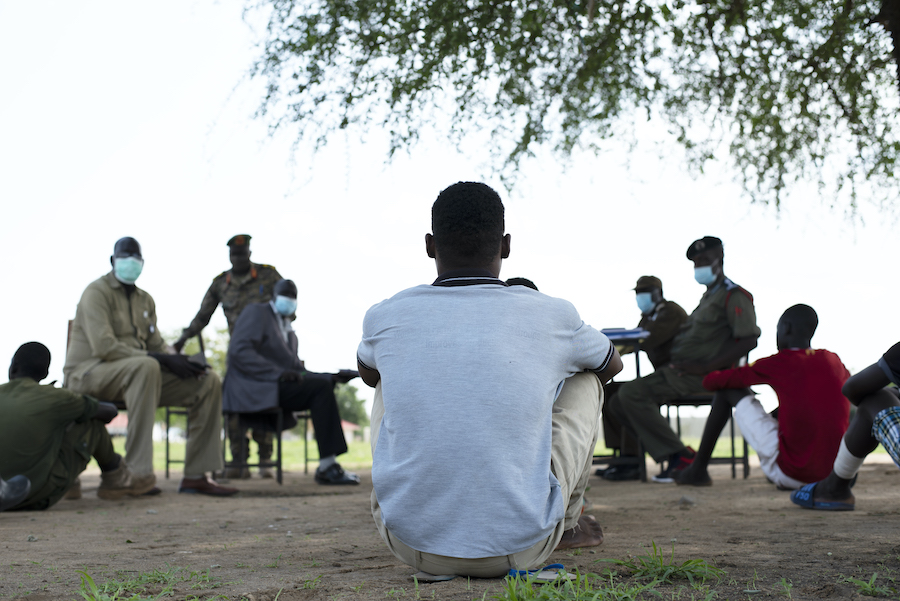 A group of adolescents aged 15 to 17 — recent recruits of the unified South Sudan forces — sit on the ground at a training facility as representatives from UNICEF, the UN Mission in South Sudan, the National Disarmament and Demobilization Commission and the South Sudan People’s Defence forces (SSPDF) negotiate their release.  © UNICEF/UNI334940/Ryeng

UNICEF has supported the release and reintegration of thousands of children from armed forces and armed groups in South Sudan — kids and adolescents recruited to fight or do other jobs during the country's prolonged civil conflict — helping them return to their families and communities, get back to school and reclaim their childhoods.

So it was a welcome development when, last February, the Government of South Sudan signed a formal action plan — the first of its kind and the most comprehensive to date — to end and prevent all grave violations against children, including the recruitment and use of children by parties to conflict.

Virginia Gamba, UN Special Representative of the Secretary-General for Children and Armed Conflict, applauded the move. "This long-awaited commitment to South Sudanese boys and girls by the authorities is the culmination of months of engagement" on these issues, Gamba said upon witnessing the plan's signing. 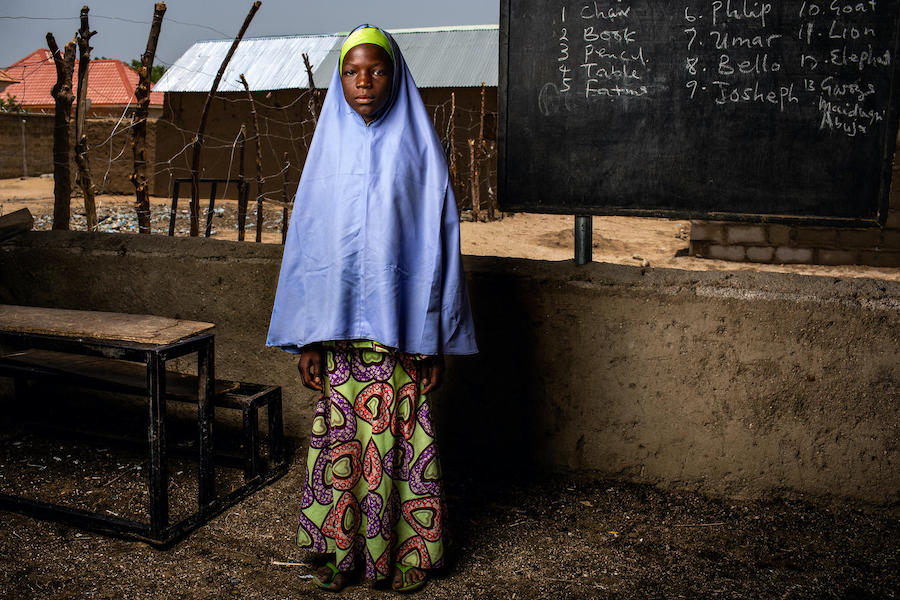 In Gwoza, northeast Nigeria, 12-year-old Hawa stands in an open-air classroom built by UNICEF after her primary school was overtaken by militants. © UNICEF/UN0311775/Kokic

In May 2015, the nations of the world joined together to strengthen protections for students, teachers and schools during armed conflict, issuing the Safe Schools Declaration — a commitment to deter military use of school buildings and otherwise restore and maintain access to education during wartime.

This year, five more countries signed on, bringing the total number of endorsements to 106: Antigua and Barbuda, Estonia, Malawi, Seychelles, and St. Vincent and the Grenadines.

UNICEF works with partners in states that have endorsed the Declaration and other armed groups to protect education from attack — developing school safety plans, providing psychosocial support to children affected by conflict, creating informal learning opportunities for those whose schools are damaged in fighting or closed for security reasons, rehabilitating and reopening schools, training teachers and distributing learning supplies. 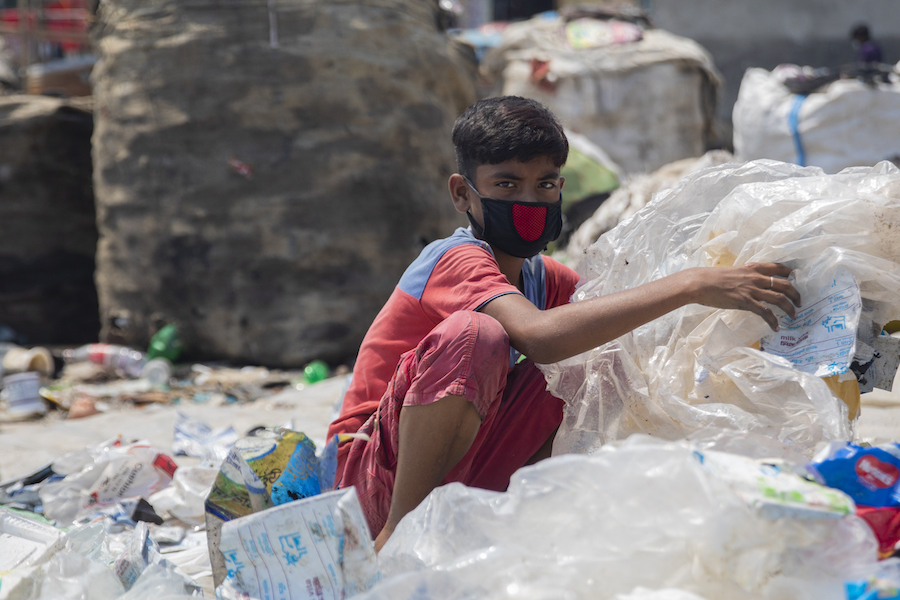 Miajul, 12, sorts through plastic waste at a dump in Shyamol Palli, Dhaka, Bangladesh, looking for material he can sell to recyclers. © UNICEF/UNI335716

On Aug. 4, Tonga became the 187th and final country to ratify ILO Convention No. 182 — an international treaty pledging to take action to end the worst forms of child labor — achieving universal ratification and making it the most rapidly ratified convention in the history of the organization.

Human rights advocates cheered the development as paving the way to the kinds of national reforms needed to keep children out of the work force, where they often end up in menial, even dangerous jobs. Widespread school closures and rising poverty during the COVID-19 pandemic have threatened to undo decades of progress toward ending the practice, as job losses and sharp declines in household income put pressure on families to have kids contribute. Social isolation and economic desperation have increased risks of exploitation and abuse. 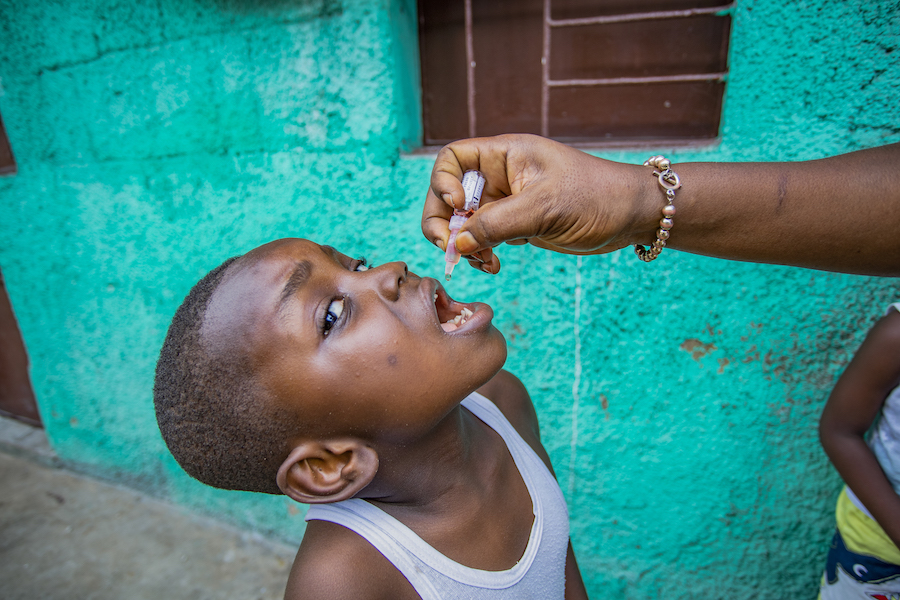 On Aug. 25, Africa was declared free of wild poliovirus, a huge win for global public health. The continent's certification by an independent body of health experts was the culmination of an exhaustive, decades-long process of documentation and analysis of polio surveillance, immunization and laboratory capacity of the region’s 47 member states.

Five of the six WHO regions — representing more than 90 percent of the world's population — are now free of wild polio, a highly infectious, paralyzing and sometimes fatal disease that mainly affects children under the age of 5. Global eradication efforts have reduced polio cases by over 99 percent since 1988. The wild polio virus continues to circulate in parts of Pakistan and Afghanistan, the last two polio-endemic countries in the world.

While calling Africa's certification an "historic achievement," Dr. Matshidiso Moeti, WHO Regional Director for Africa, urged continued vigilance. Vaccination rates must be maintained to avert a resurgence, he noted, and to address the continued threat of vaccine-derived strains, which are rare.

Stopping wild polio in Africa has brought far-reaching benefits beyond saving children from paralysis. The skills and infrastructure developed to support polio eradication have proved critical for arming nations in the battle against other health threats — including COVID-19 — by improving health services in vulnerable communities and strengthening the overall health system. 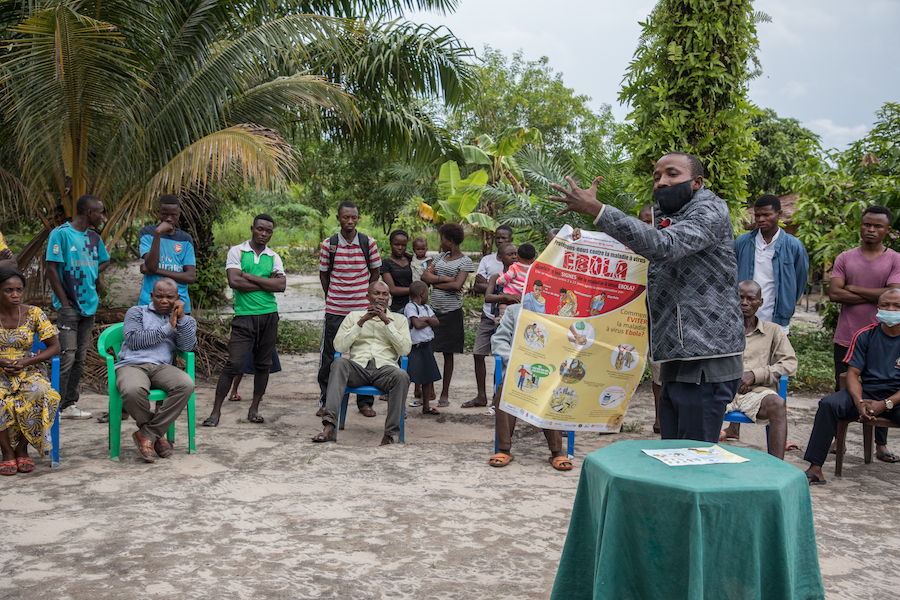 The Ebola outbreak in Equateur Province was the DRC's 11th since 1976. It lasted five and a half months, killing 55 people and infecting 130. Two children died.

But by the end, it was clear that efforts to strengthen critical health infrastructure, improve hygiene practices and otherwise engage communities in critical containment and prevention measures had made a difference.

As during previous outbreaks, UNICEF worked closely with government and local partners to improve water and sanitation facilities within the Ebola treatment centers, provide psychosocial support to those infected and affected — including children separated from their caregivers — and strengthen knowledge of the disease and prevention practices within communities. 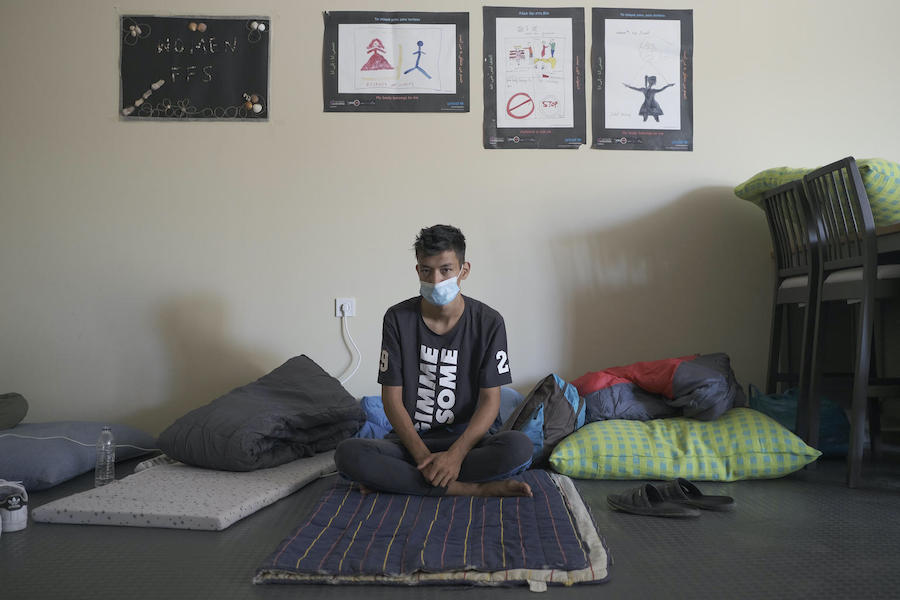 A young migrant photographed inside a temporary shelter facility set up by UNICEF and partners on the Greek island of Lesvos after a fire destroyed the camp where he had been staying. © UNICEF/UNI371404/Marzorati

On Nov. 18, the Migration and Asylum Minister of Greece announced that the government would no longer detain unaccompanied migrant children in jail cells, a move lauded by child rights advocates as a positive step forward to protecting the most vulnerable and upholding international law, which forbids any form of migration detention for children.

UNICEF has long advocated against forced detention for refugees and migrants, without exception, and has called on European governments to work together to ensure all refugee and migrant children — accompanied or not — have access to safe and adequate shelter. This includes supporting alternatives such as specialized accomodation, foster care and guardianship, and fast-tracking family reunifications for those who already have relatives living in Europe, among other measures. 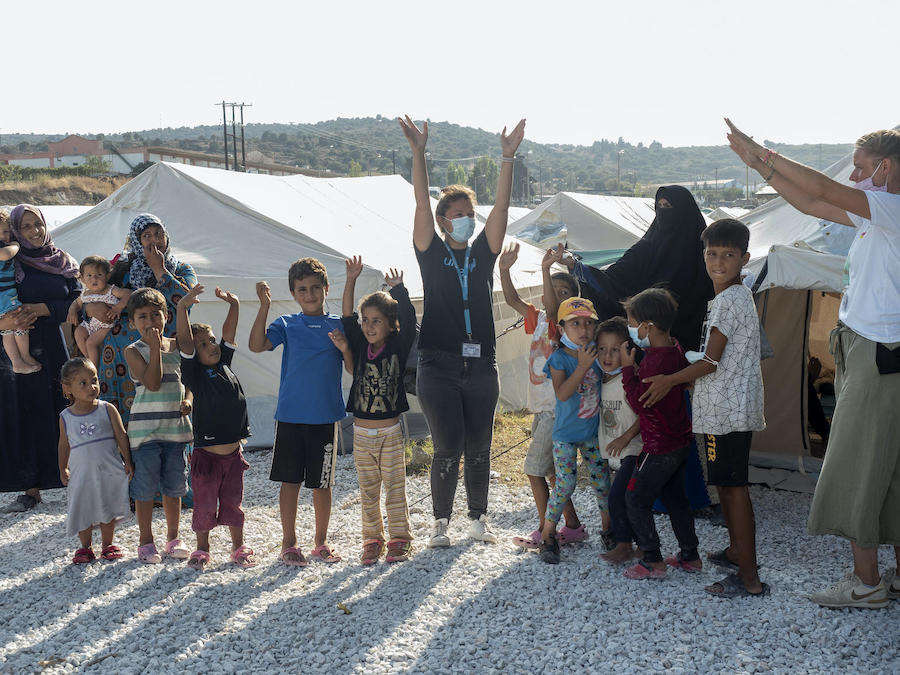 UNICEF staff lead children in a game outside a temporary facility for refugees and migrants on the Greek island of Lesvos.© UNICEF/UNI375455/Canaj/Magnum Photos

Every year, UNICEF responds to approximately 300 emergencies — natural and manmade — putting children first. With a presence in over 190 countries and territories, UNICEF has helped save more children's lives than any other humanitarian organization in the world. Help UNICEF deliver for children in need. Please donate.

Top photo: 13-year-old Nabyla (name changed) attends class in Kaya, Burkina Faso, a town where her family settled after armed groups overtook their hometown, forcing them to flee. "At school I received some help. I was given schoolbooks and pens, so I could continue to study for my future. I love going to school... It makes me forget the fear I felt with the armed men." Nabyla's story is featured in "A Decade of Safeguarding Education in Armed Conflict," a report from the Global Coalition to Protect Education from Attack. UNICEF is a member of GCPEA's Steering Committee.  © UNICEF/UNI280376/Tremeau