Survivors Care for Children Orphaned by Ebola in the DRC

More than 2,500 people have been infected and nearly 1,700 people have died since the second largest Ebola outbreak in history began last August in eastern Democratic Republic of Congo (DRC). Working with national governments, the World Health Organization (WHO) and other partners to combat the severe, often fatal virus illness, UNICEF is leading mass public health information campaigns, protecting schoolchildren with handwashing facilities and caring for children orphaned by Ebola.

Hundreds of children have been orphaned or left on their own when their parents contracted Ebola and were taken to treatment centers or died. UNICEF and partners have opened nurseries next to Ebola treatment centers in Beni and Butembo, where Ebola survivors, themselves virtually immune to the virus, have become caregivers for the littlest children, providing the love and attention they need in their parents' absence. 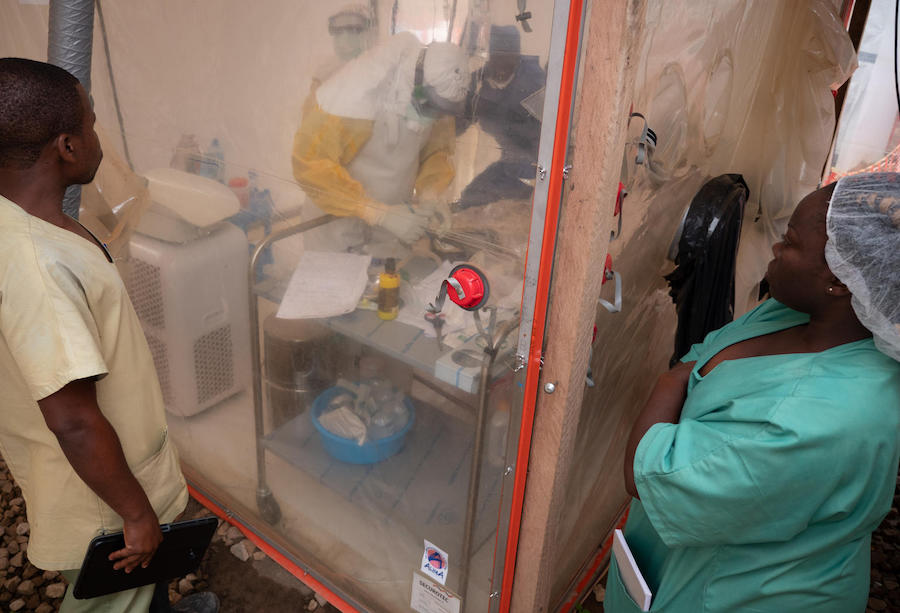 Children account for nearly one-third of all confirmed and probably Ebola cases in the DRC, compared to about one-fifth in previous outbreaks. Above, Thomas, far left, looks on as a health care worker covered head-to-toe in protective gear examines his 1-week-old daughter, Benedicte, in an isolation tent at the Ebola Treatment Center in Beni. Benedicte’s mother died of Ebola and she, too, is now infected. Ebola symptoms include fever, severe headache diarrhea and, in some cases, hemorrhaging. Early intervention can significantly improve the chances of a patient's survival. © UNICEF/UN0264162/Hubbard 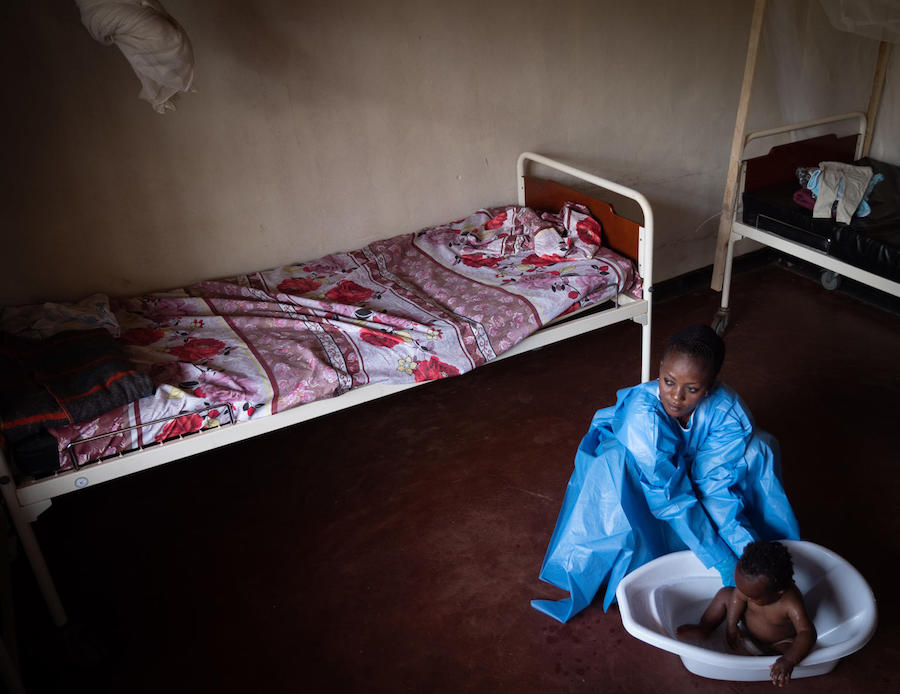 Children who lose a parent due to Ebola or whose parents are infected by the disease are at risk of being stigmatized, isolated or abandoned, in addition to the heartbreak of losing a loved one. They are doubly affected by Ebola. At the UNICEF-supported nursery in Beni, Ebola survivor Kavira bathes 6-month-old Josué, whose mother is undergoing treatment for Ebola. All the children at the center are monitored for signs of the virus and receive daily medical checkups. They also receive love and affection from survivors, who can cuddle them without risk of infection. © UNICEF/UN0264161/Hubbard 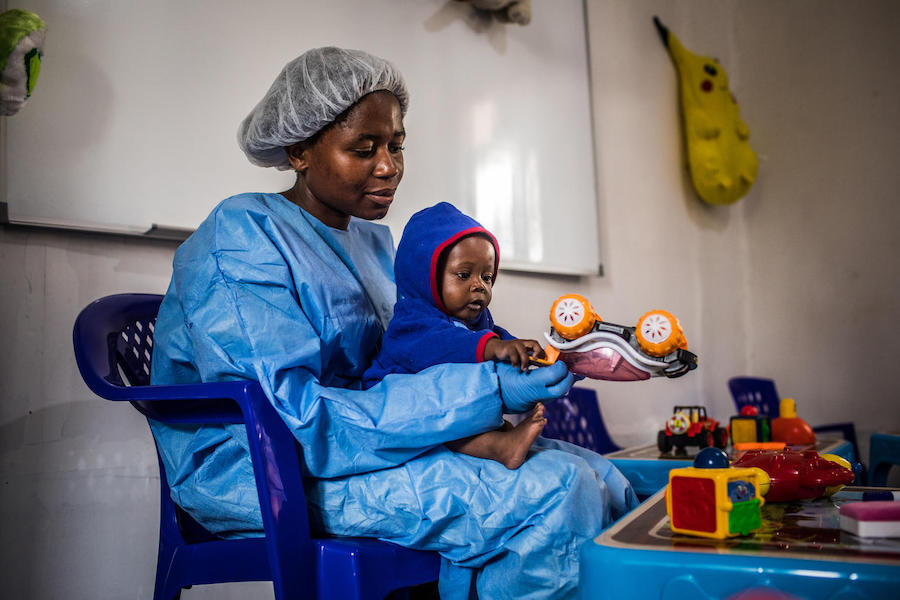 When Ruth, 19, contracted Ebola, her body was flooded with high levels of protective antibodies, virtually eliminating the likelihood of her catching the virus again. After she recovered, Ruth returned to the Ebola Treatment Center of Butembo as a caregiver, to feed and hold babies whose mothers are suffering from the disease. Above, she plays with 7-month-old Christ-Vie inside the UNICEF-supported nursery. Christ-Vie's mother died a few days before this photo was taken. Until her family comes to take her home, UNICEF will support her care. © UNICEF/UN0311514/Tremeau 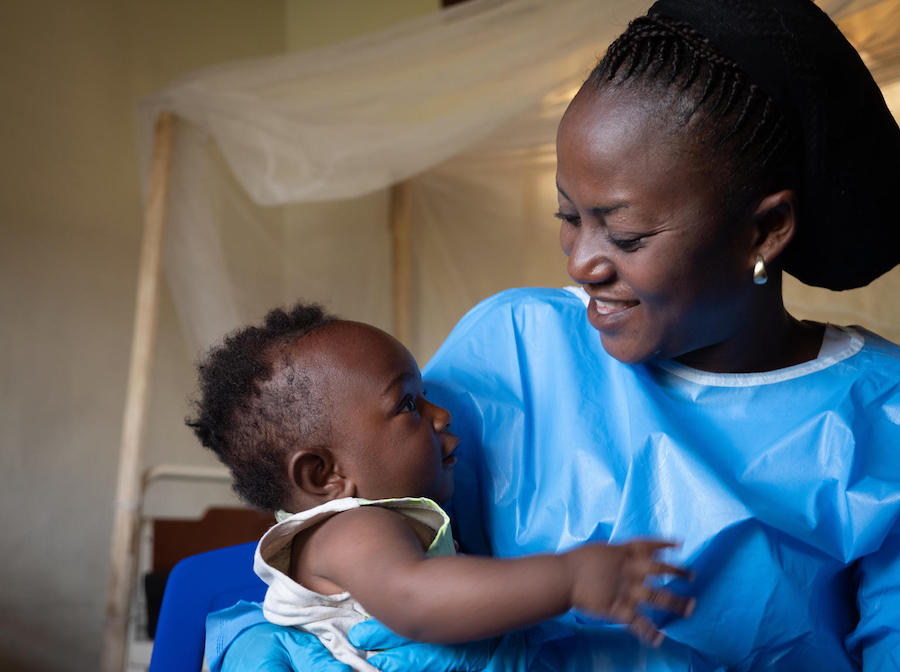 On July 16, WHO declared the Ebola outbreak in DRC a "public health emergency of international concern." This designation, reserved for the most severe health emergencies, has only been used four times previously, including the outbreak in West Africa that began in 2014 — the worst in history — killing more than 11,000 people in six countries: Liberia, Guinea, Sierra Leone, Nigeria, the United States and Mali. UNICEF played a major role in responding to the outbreak in West Africa, delivering more than 8,000 metric tons of critical medical supplies, working with local communities to raise awareness of safe health practices and helping survivors — especially the children — heal. © UNICEF/UN0264158/Hubbard

Photo at top: Ebola survivor Kavira cares for 6-month-old Josué at a UNICEF-supported nursery in Beni, in the eastern Democratic Republic of Congo. Josué's mother is infected with Ebola, and cannot care for him while she undergoes treatment in isolation. © UNICEF/UN0264160/Hubbard