Crisis in Madagascar Linked to Climate Change and COVID-19

Southern Madagascar, or Grand Sud — the poorest part of one of the world’s poorest countries — is suffering from the worst drought in 40 years due to low rainfall, one of the effects of climate change. COVID-19 has added to the strain, destroying livelihoods and overburdening the region's already fragile health system.

Over 1.1 million people are now food insecure in Grand Sud, with some areas on the brink of famine. The number of malnourished children is expected to quadruple to over 500,000 by April unless humanitarian efforts are rapidly scaled up, according to UNICEF and the World Food Program (WFP).

As many as 110,000 children under age 5 could end up with severe acute malnutrition, which is life-threatening; those who survive it often suffer irreversible damage to their growth and development.

"We need to double our efforts to curb this catastrophic rise in hunger, but we cannot do it without significant funding resources and buy-in from partners," said Moumini Ouedraogo, WFP's representative in the country.

Photographer Safidy Andrianantenaina has been on the ground in some of the hardest-hit areas of Androy and Anosy, capturing the day-to-day struggles of children and families as they try to survive: 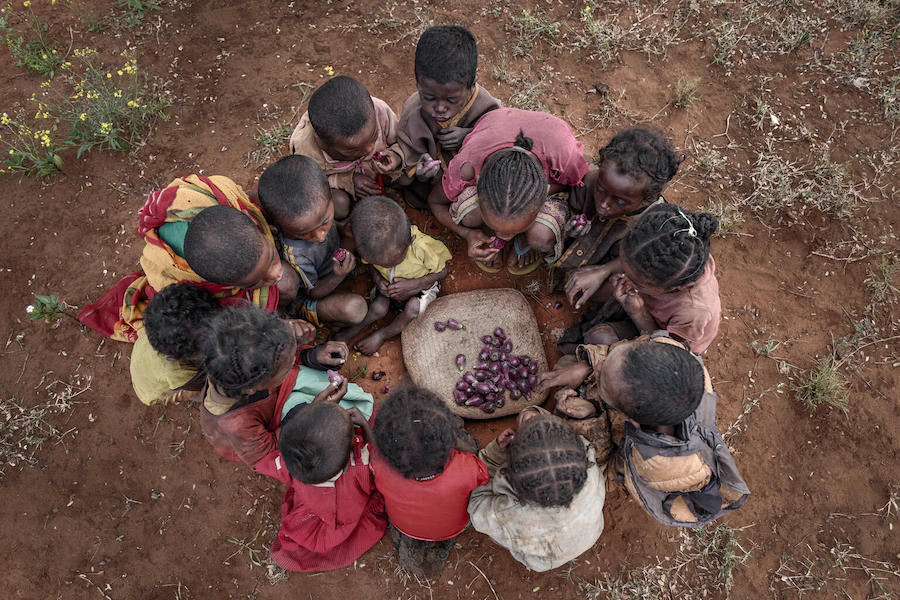 In Kobamirafo, which is in Androy, children huddle over a basket of prickly pear cactus fruit. A drought-resistant crop, the cacti has become a crucial food source in the region, particularly when harvests fail. 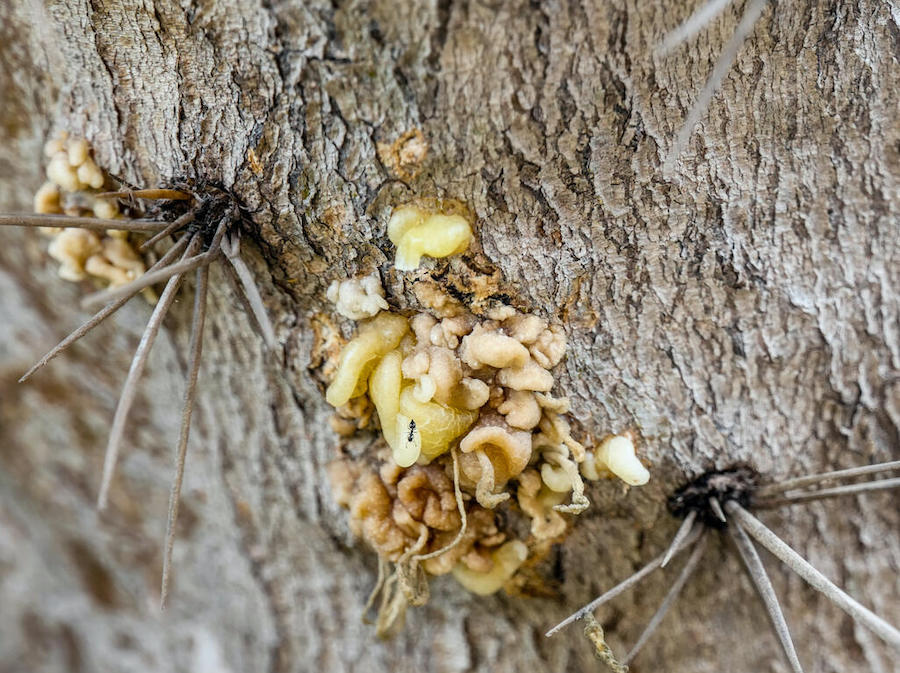 Cactus resin, or lide, is another food source freely available in nature. In July, a winter month in Madagascar, children living in Fenaivo, located in the Ifotaka commune in South Amboasary, Anosy, have been known to forage for it to alleviate hunger — despite the fact that the resin has little taste and is difficult to digest. To get by, Vaha, center, and her husband rent a cart to bring firewood to sell at the market in Ambovombe, splitting the proceeds with the cart's owner. 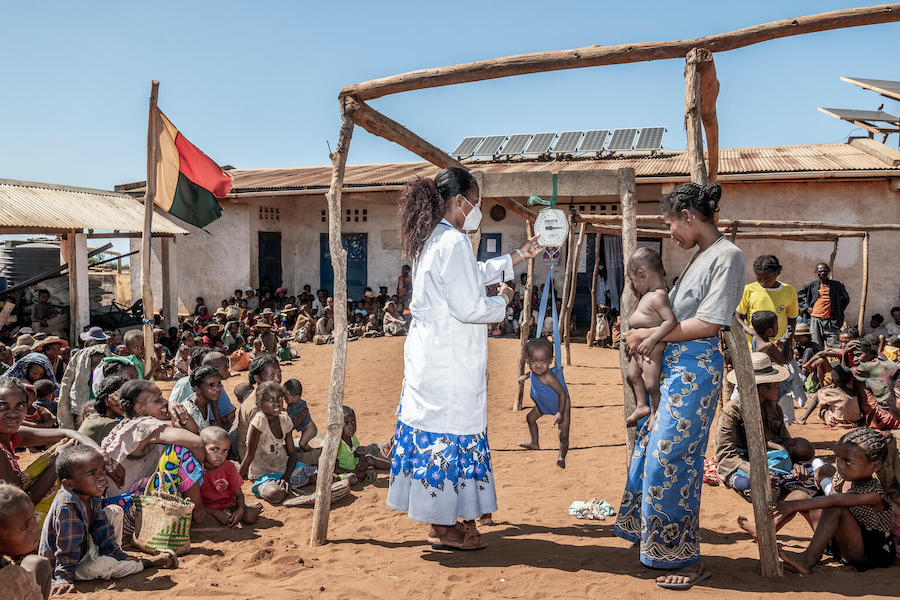 A child is weighed by a health worker outside a facility in Maroalopoty, a municipality in Ambovombe, Androsy, where UNICEF supports malnutrition screenings and treatment, including the distribution of Ready-to-Use Therapeutic Food (RUTF). On this day, 91 children were waiting to be checked. Many primary care facilities in southern Madagascar do not have the resources to treat malnourished kids, which is where UNICEF and partner support comes in. 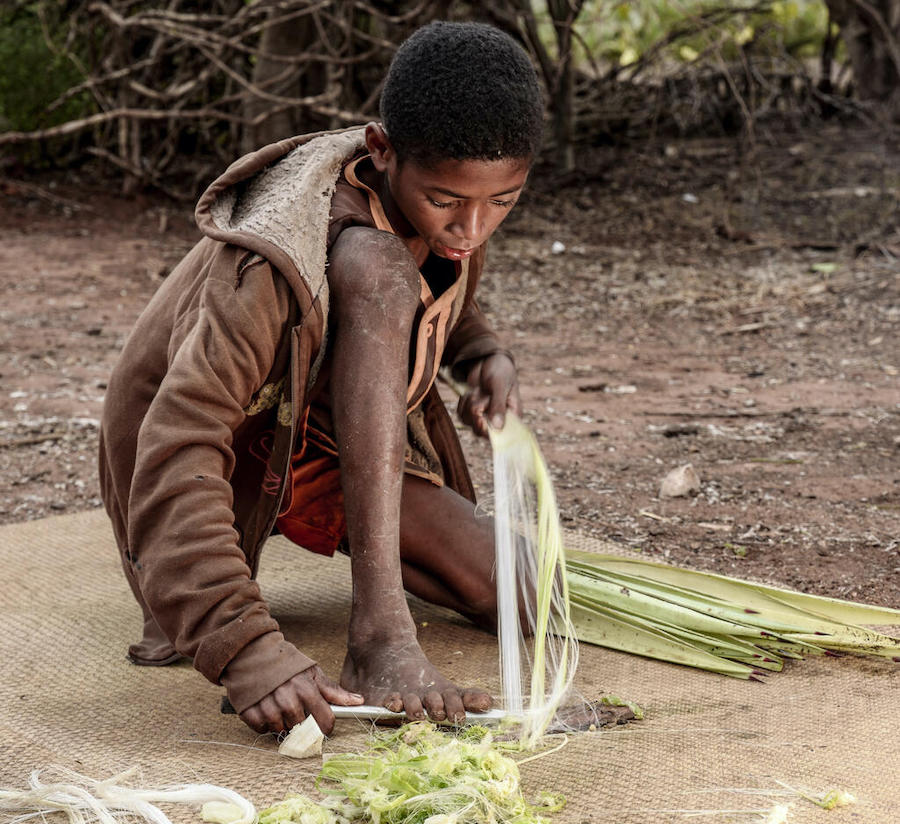 Laha, 14, uses a spearhead to crush agave leaves with his foot and extract sisal fiber he can then sell at the market to help support his mother and six younger siblings. 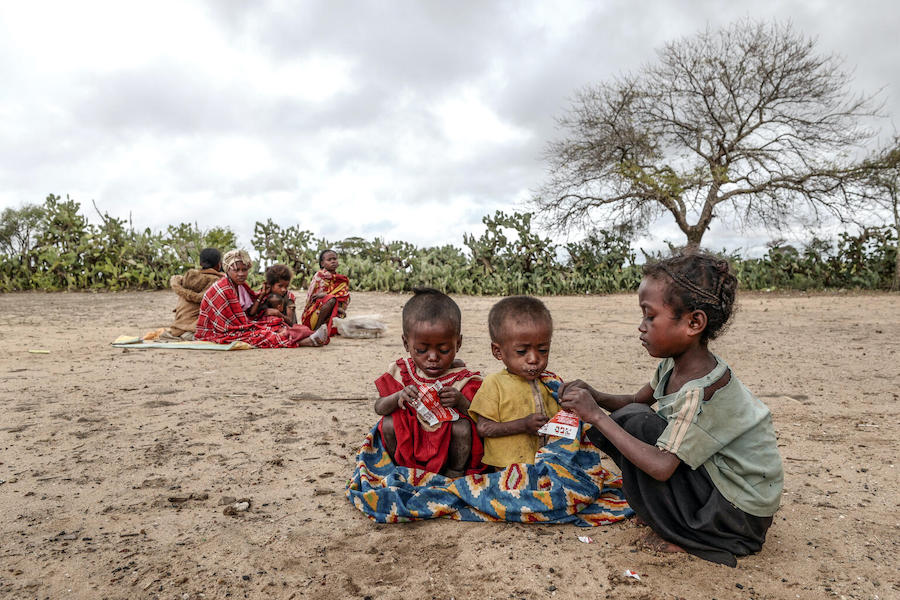 An older sibling, far right, gives RUTF to Samberahae, 3, front left and Fedraza, 2. The nutrient-rich peanut paste provided by UNICEF comes in packets that make it easy to distribute and use. 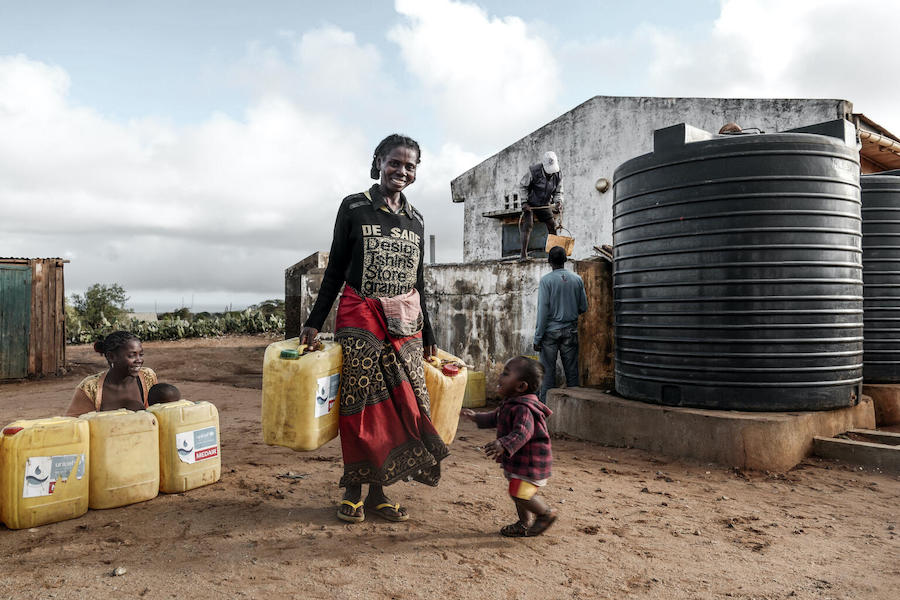 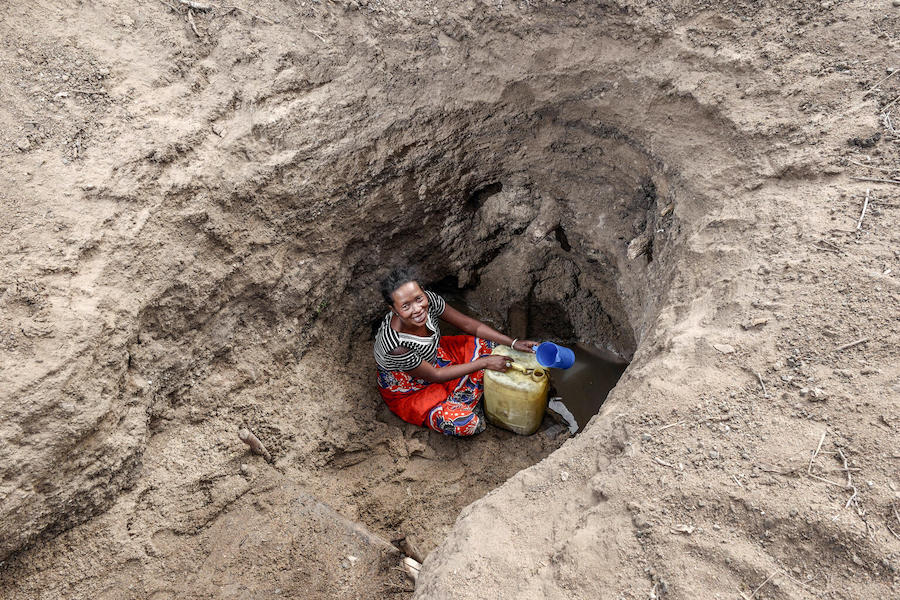 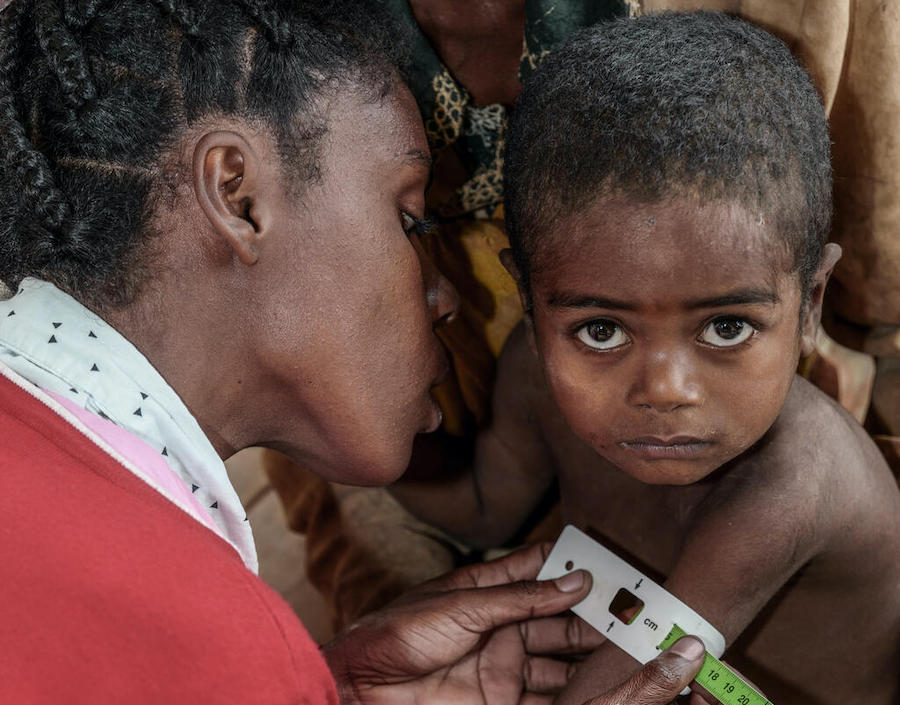 Asaaze Angeline, head nurse at the Ambohimalaza health center in Ambovombe, measures the mid-upper arm circumference of Mara, Laha's 3-year-old brother. Use of the MUAC bracelet is standard practice for a malnutrition screening; when the tape shows green, that means the child is doing well.

“By providing families with access to safe water and treating malnourished children with therapeutic food, lives can be saved." said Michel Saint-Lot, UNICEF’s Representative in Madagascar. "But we have to act now.”

Help UNICEF save and protect vulnerable children from the devastating effects of climate change and COVID-19. Donate today.

Top photo: A health worker examines Magnovonazy, 6, at Bekiria Basic Health Center in Fenaivo, a village in Madagascar's Anosy region. The child is malnourished and has also tested positive for malaria, a dangerous combination. © UNICEF/UN0496740/Andrianantenaina