Manuel Fontaine, The Director of UNICEF’s Office of Emergency Programs since early 2017, recently joined a CBS News 60 Minutes crew documenting the plight of children in Afghanistan today. Malnutrition rates are soaring in the country, and millions of children remain out of school, their futures at grave risk. UNICEF USA spoke with Fontaine to learn more.

Please characterize for us the situation in Afghanistan for children today. What are the greatest threats to their health, safety and well-being?

MANUEL FONTAINE: The situation of children in Afghanistan right now is on the verge of catastrophe, frankly. It is a country of about 40 million people, where more than half of the population is currently going through severe food insecurity, and that will continue in the coming months, at least through the winter. There has been a succession of events: prolonged conflict, natural disasters — particularly drought — and, of course, COVID-19. Over half the population is in need of humanitarian aid. That's really as bad as it gets.

Close to 700,000 people have been displaced by recent fighting. We are seeing quite a lot of cases of acute watery diarrhea, which is due to the fact that more than 80 percent of the population of Afghanistan relies on bacteriologically contaminated water to drink. We have measles, quite serious cases of measles. There are more than 1 million children who are at risk of severe acute malnutrition over the next few months. In 27 out of 34 provinces, the level of acute malnutrition has reached emergency thresholds, and it’s getting worse.

In education — this is a country where we had made great progress. If you look back at 2001, we had one million children in schools. In 2021, we have 10 million children in school. There are still more than four million not in school, but that's a lot of boys and girls in school. Still, we're very worried that we're going to have a lot of kids dropping out if we cannot sustain classes and school support. We'll need to make sure that schools are functioning. 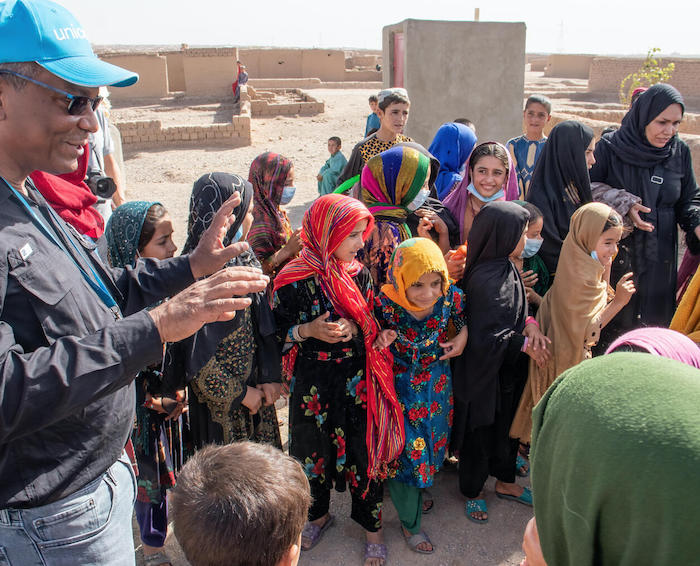 UNICEF Representative in Afghanistan Hervé Ludovic De Lys and World Food Program Afghanistan Representative and Country Director Mary-Ellen McGroarty visit a Child Friendly Space at an IDP settlement in the outskirts of Herat city where 120 boys and girls engage in recreational activities, numeracy and literacy classes and are provided with information on hygiene practices. This is one of three Child Friendly Spaces in the camp located in Sabz-e-Shark, where roughly 14,000 families have settled since 2018, having been displaced due to drought and conflict. © UNICEF/UN0530715/Bidel

I should mention that there have been 60,000 cases of measles in the country. And Afghanistan is one of the two countries that still has wild polio.

What is UNICEF focusing on with partners and teams on the ground and why are those priorities?

MANUEL FONTAINE: We have two parallel, if you will, strategies. One is the humanitarian. For example, we have mobile health teams that can go around and then bring health services to places that are fairly remote to bring basic health services to people.

There is something else that we've been doing for a number of years now, and that is supporting community-based schools. These are schools where teachers are basically organizing small classrooms in their communities. We visited one with the CBS 60 Minutes team when they were here reporting that story — one of those community-based schools where girls were actually in good number.

We are also doing some urgent WASH work — trucking water to places where people are displaced so they have water to drink.

What we know is that these kinds of rapid responses on their own are not going to be enough to avoid catastrophe. What we need at the same time to get to scale is to be able to get basic services back online and to maintain those, services that we were running before Aug. 15 — not always perfectly well but at least something was running. We need to make sure they continue. An important part of that is making sure health workers are being paid, and we have a program managed by a few NGOs doing that. We have to look as well at the public health service, where people have not been paid for a long time.

UNICEF's mission is to reach vulnerable children wherever they are, even where there is conflict and political and social instability. How are you managing to navigate that in Afghanistan right now?

We've worked in Afghanistan for more that 70 years. We have worked with whoever at any given time was in charge and present on the ground. We're focusing on children. This is what we do.

We engage to make sure that we get the assurances, the security, the safeguards so that we can have access, that we can actually move around and deliver our programs. And that's what we've always been doing.

There's no time to waste. We're on the ground. We're increasing our capacity. We're getting more and more people. But we need to be trusted and we need to be supported. — Manuel Fontaine, UNICEF Director of the Office of Emergency Programs

Where did you go with the 60 Minutes crew?

MANUEL FONTAINE: We went to visit a community-based school in a small village about two hours drive outside of Kabul. it was in a mosque, a small school with a number of girls. What was really particularly interesting is the fact that a number of the girls were attending school for the first time ever. They were maybe 10 or 11 years old, so they were not very young, they were well past the age where a child would normally start school. So there was a real excitement, and certainly an expectation that they'd be able to continue their education. The energy was interesting and it was quite fascinating. I think it made the crew realize that all of this community work that UNICEF is doing — the rapid response work — allows us to connect with girls, with children in those communities, and then integrate them into our education programs. 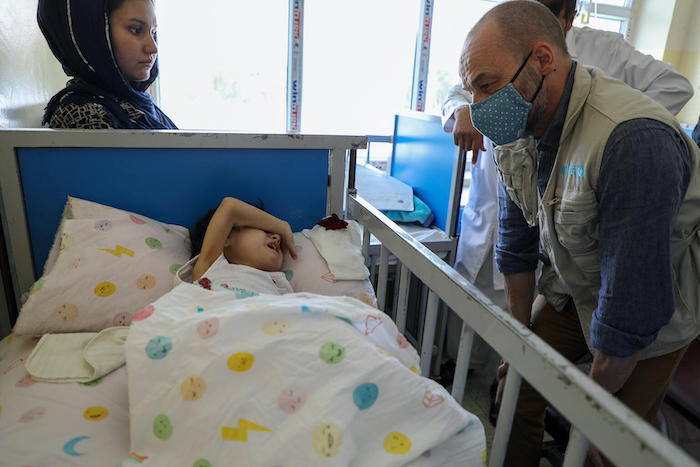 UNICEF's chief of emergency programs Manuel Fontaine visits with a child at a malnutrition treatment ward at the Indira Gandhi Children's Hospital in Kabul.© UNICEF/UN0506225/Fazel

We also visited a pediatric hospital in Kabul, one of those public health facilities in which basically the staff had not been paid since early summer. Until recently they had been receiving a meal at lunch but even the meals were running out, and the drugs were also running out. And yet the health workers were still coming every day and working in this difficult environment, treating children with severe acute malnutrition, children with infections and other diseases. Working every day without pay. They did share with us, of course, their frustration. But they also felt very strongly about their mission. I think the team from CBS was also quite touched, moved by the mothers and fathers who were bringing their kids in for treatment.

What would you say to our U.S. audience reading this to help them understand the urgency of the situation and the support that's needed? What's at stake here?

At the same time, Afghanistan's health system, education system, social system — all social services — are on the brink of collapse. When you put it all together, you realize how terrible and dire the situation for children in Afghanistan is. And there's no time to waste. We need to act fast. We need to trust the humanitarians. We need to trust the organizations on the ground able to actually make a difference. We're working with a lot of people — the same teachers, the same doctors, the same social workers who were there before and want to do their work. There are 40 million people who are actually staying in the country and are facing one of the worst humanitarian situations in the world. It's as simple as that.

At the same time, access is quite good. We're able to move around the country to access those in need, to access some of the villages and some of the remote places we have not been accessing before. Now that we're able to do that, there's really no time to waste. We're on the ground. We're increasing our capacity. We're getting more and more people. But we need to be trusted and we need to be supported. 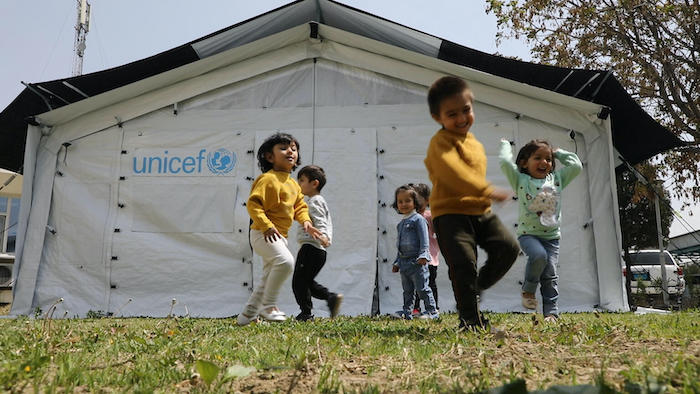 Children play inside and outside new high performance tents UNICEF recently installed in Afghanistan to be used for community-based education programs. In the mountainous regions, freezing temperatures of -9 °C (15 °F) are common for many communities during the winter months. © UNICEF/UN0443247/Fazel

Ongoing activities and key achievements in Afghanistan include:

On Dec. 7, as part of its global Humanitarian Action Plan (HAC) for children, UNICEF launched its largest ever single-country appeal for Afghanistan, for $2 billion to reach 15 million people, including 8 million children, with humanitarian assistance in 2022. This level of funding is needed to avert the imminent collapse of health, nutrition, WASH, education and other vital social services for children and families.

UNICEF's plan for 2022 is to scale up services to:

Delivery of such services and preventing systems’ collapse also requires supporting payments to frontline workers such as health workers, teachers, WASH technicians, and social workers among others. 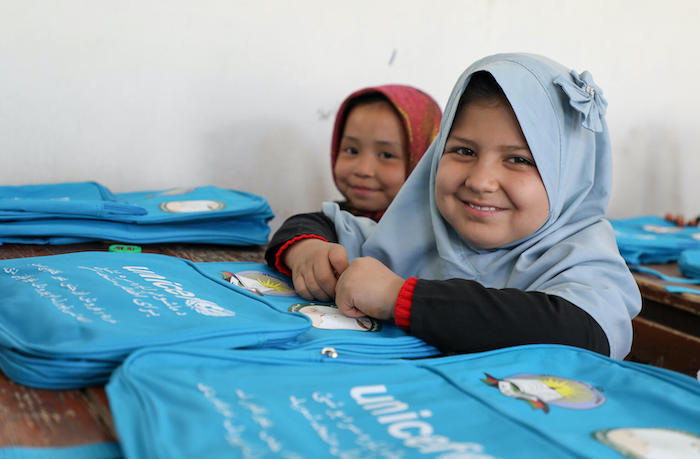 Students in Mazar, Afghanistan, with their UNICEF backpacks. UNICEF has been on the ground in Afghanistan for 70 years delivering for children and families. In 2022, UNICEF aims to reach 8 million children who are in urgent need of humanitarian aid due to multiple escalating crises. © UNICEF/UN0436387/Karimi

Top photo: In Maywand, Afghanistan, 9-month-old Mansor's grandmother feeds him Ready-to-Use-Theraputic-Food (RUTF), a fortified peanut paste. The infant was diagnosed with severe acute malnutrion during a visit from a UNICEF-supported mobile health and nutrition team to their village. UNICEF, the sole provider of this lifesaving treatment in Afghanistan, has been sending hundreds of thousands of RUTF sachets all over the country as the country's malnutrition crisis deepens. © UNICEF/UN0562530/Romenzi