Half of all children under 5 in Afghanistan are likely to suffer from acute malnutrition by the end of the year. As food insecurity sweeps the nation, UNICEF and partners are scaling up lifesaving assistance to families caught in the deepening crisis.

Years of conflict and the current economic crisis in Afghanistan have left 14 million people facing acute food insecurity. An estimated 3.2 million children under the age of 5 are expected to be acutely malnourished by the end of the year — at least 1 million of these children are at risk of dying from severe acute malnutrition without immediate treatment.

UNICEF and partner agencies are in a race against time to deliver lifesaving aid to crisis-affected people and pre-position supplies for the coming winter.

Food prices in Afghanistan have risen more than 50 percent since August. “As more families struggle to put food on the table, the nutritional health of mothers and their children is getting worse by the day," said UNICEF Representative in Afghanistan Hervé Ludovic de Lys. "Children are getting sicker and their families are less and less able to get them the treatment they need. Rapidly spreading outbreaks of measles and acute watery diarrhea will only exacerbate the situation.” On September 29, 2021, a mother and her children wait for their health and nutrition screening at a mobile health team clinic supported by UNICEF and the World Food Program at Sabz-e-Shark IDP settlement in Herat, Afghanistan. © UNICEF/UN0530714/Bidel

According to World Food Program (WFP) surveys, 95 percent of Afghanistan's households are not consuming enough food. Adults are eating less and skipping meals so their children can eat more.

On a recent visit to Herat, de Lys and WFP Afghanistan Representative and Country Director Mary-Ellen McGroarty spoke with Jahan Bibi, whose 18-month-old daughter is being treated for severe acute malnutrition at the Herat Regional hospital. Unable to breastfeed her child, Bibi brought her to the hospital. “We have no food at home," she said. "We are selling everything to buy food, yet I barely eat anything. I am weak and I don’t have any milk for my child.” Four-month old twins Aisha and Youssef are being provided with medical care and therapeutic food at the UNICEF-supported Inpatient Therapeutic Feeding Center in Herat Regional Hospital for infants suffering from severe acute malnutrition (SAM) with complications. SAM can be fatal if untreated. © UNICEF/UN0530488/Bidel

At a food distribution center in Herat city, De Lys and McGroarty met with families struggling to make ends meet amidst drought and lack of jobs. They also visited a settlement for internally displaced families, where mobile health and nutrition teams are providing lifesaving services to women and children, supported by UNICEF and WFP. 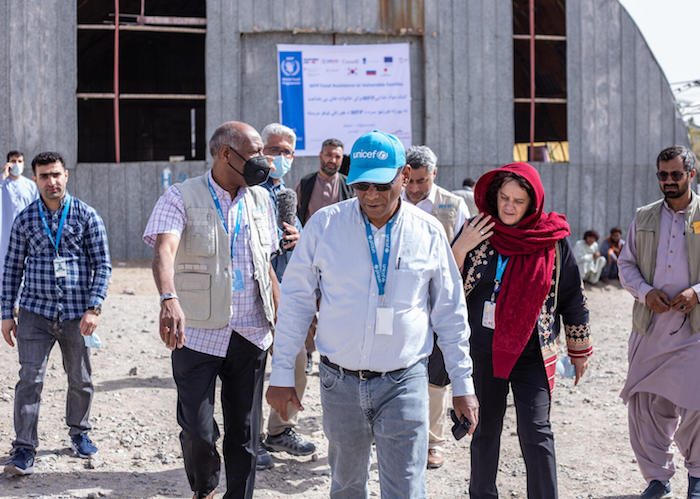 The two UN agencies are adding 100 more mobile health and nutrition teams to meet the needs of families in crisis. Already 168 mobile teams are providing a lifeline for children and mothers in hard-to-reach areas.

UNHCR, WFP, UNICEF are on the ground providing lifesaving assistance to IDPs (displaced due to conflict) in Zabul province with food & NFIs to meet their immediate needs. Sustained support is critical to improve access to basic services & help stabilise communities. #Afghanistan pic.twitter.com/uPi5iDdx1p

So far this year, more than 210,000 children with severe acute malnutrition have received lifesaving treatment through UNICEF-supported services. In the past eight weeks, Ready-to-Use Therapeutic Food (RUTF) for more than 42,000 children and therapeutic milk for 5,200 children was delivered to UNICEF partners. 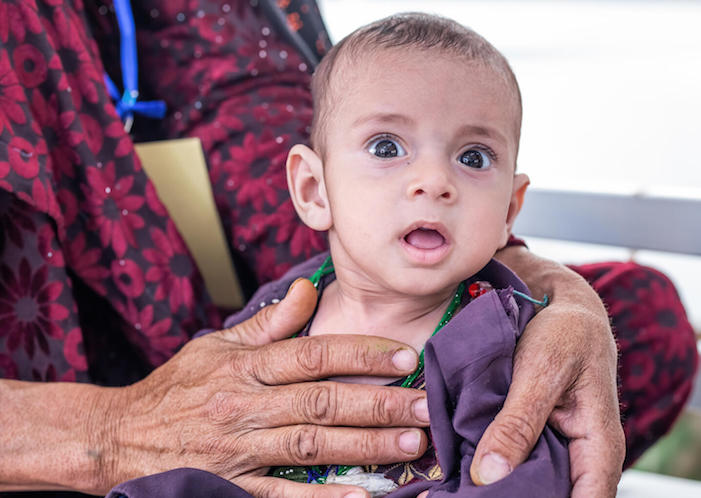 At the beginning of 2021, the humanitarian situation in Afghanistan was already one of the worst in the world, with nearly half of the population – some 18.4 million people, including nearly 10 million children – in need of humanitarian assistance. Conflict and insecurity have displaced nearly 700,000 people within the county this year; more than 3.5 million Afghans have been uprooted by conflict.

"The needs of the children of Afghanistan have never been greater," said de Lys. "We cannot abandon them now."