With Climate Change, Kids' Lives and Futures Hang in the Balance

This World Environment Day, the alarm bells are ringing louder than ever.

Consider this: 2017 has been declared the costliest year on record for climate-related impacts, from mudslides, wildfires, hurricanes and heat waves, to severe drought and related famine and food crises across Africa and the Middle East. Extreme weather events and climate-related disasters take a heavy toll on human well-being, the World Meteorological Organization noted in its annual report.

The effects are even worse for children.

These climate-related impacts compound existing threats to the health and safety of already fragile populations — particularly the impoverished and those caught in conflict and other humanitarian crisis situations. And climate change has been linked to another worrisome trend: the emergence of a new generation of child brides.

"Climate change is a global threat in itself and a massive multiplier of other threats," UN Secretary-General Antonio Guterres said recently at a high level meeting in Asia. "We must drastically raise our ambition ... Science demands it; the global economy needs it; and humanity depends on it."

UNICEF has long advocated for collective action to curb greenhouse gas emissions as a way to begin to counteract the effects of climate change. UNICEF has also reported extensively on how these effects disproportionately impact already disadvantaged children and families around the world.

Here's a look at some of those ripple effects, and what UNICEF is doing about it: More than half a million Rohingya refugees who fled Myanmar to escape horrific violence have settled in Cox's Bazar, Bangladesh, an area that is particularly prone to cyclones and monsoons. Rising global temperatures have made these extreme weather events even more intense, bringing more flooding, more landslides, and higher risks of food scarcity and waterborne disease. To prepare for this year's rainy season, UNICEF worked to relocate toilets and water storage tanks to higher ground and provide immunizations, including the oral cholera vaccine. Above: Rohingya refugee children and women approach the shore of the Naf River on a makeshift raft of logs, bamboo poles and empty plastic jerry cans. © UNICEF/UN0144601/Brown 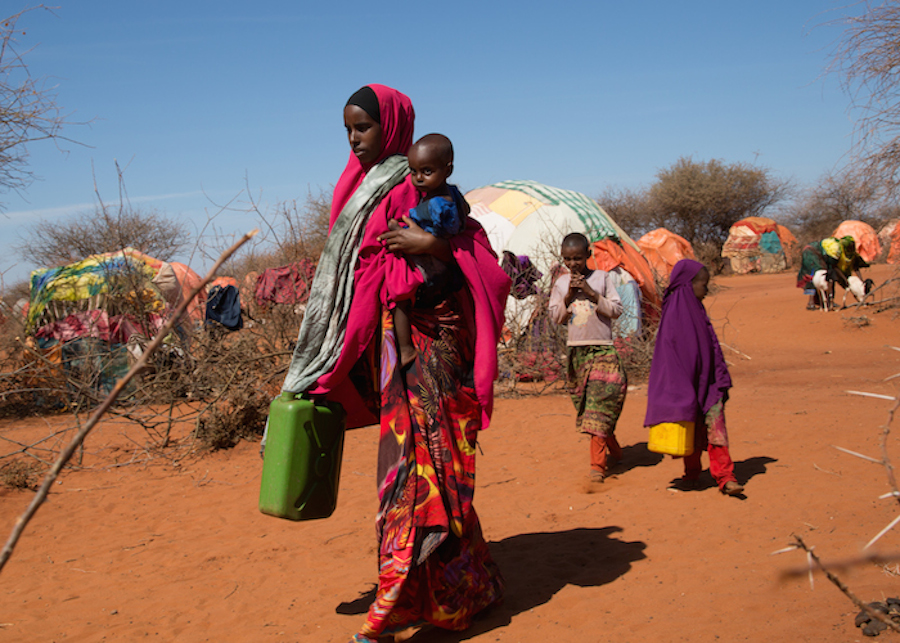 Prolonged drought in the Horn of Africa has been devastating for millions of children and their families — destroying livelihoods, forcing displacement, creating food insecurity and causing widespread malnutrition, among other hardships. Bedra Dek, 21, and her three children are among those receiving support from one of UNICEF's mobile health and nutrition teams operating out of the Al Bahi site in the Somali region of Ethiopia, the country's most severely affected area. © UNICEF/UN0141632/Tesfaye 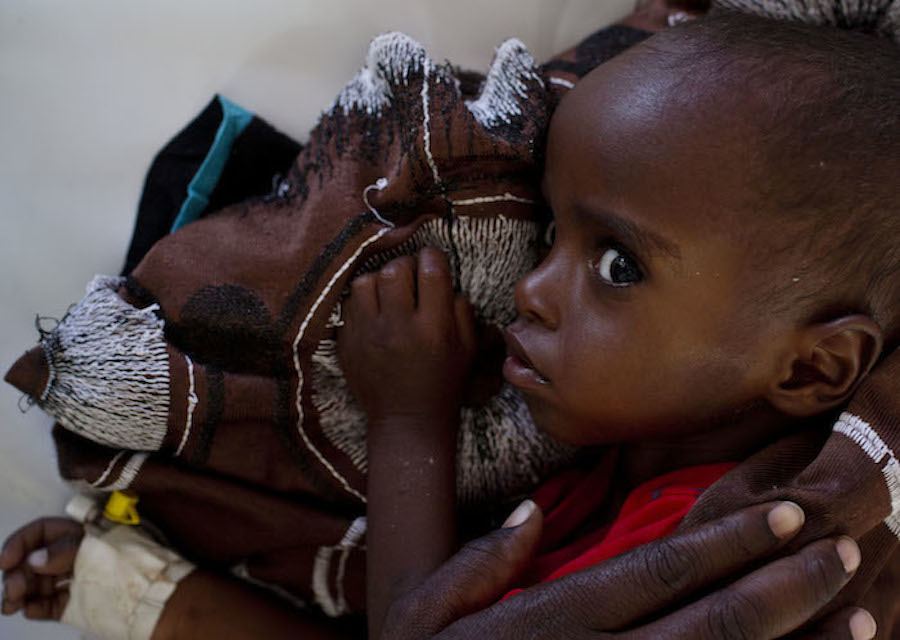 Malnutrition rates among children in drought-affected areas have skyrocketed as famine conditions take hold. Above: Abdi, 20 months old, is being treated for severe acute malnutrition (SAM) at a UNICEF-supported facility in Burao, Somalia. UNICEF is the world's largest supplier of Ready-to-Use Therapeutic Food (RUTF), an energy-packed peanut paste containing vitamin and mineral supplements used to bring dangerously undernourished kids back from the brink of starvation. © UNICEF/UN057377/Holt 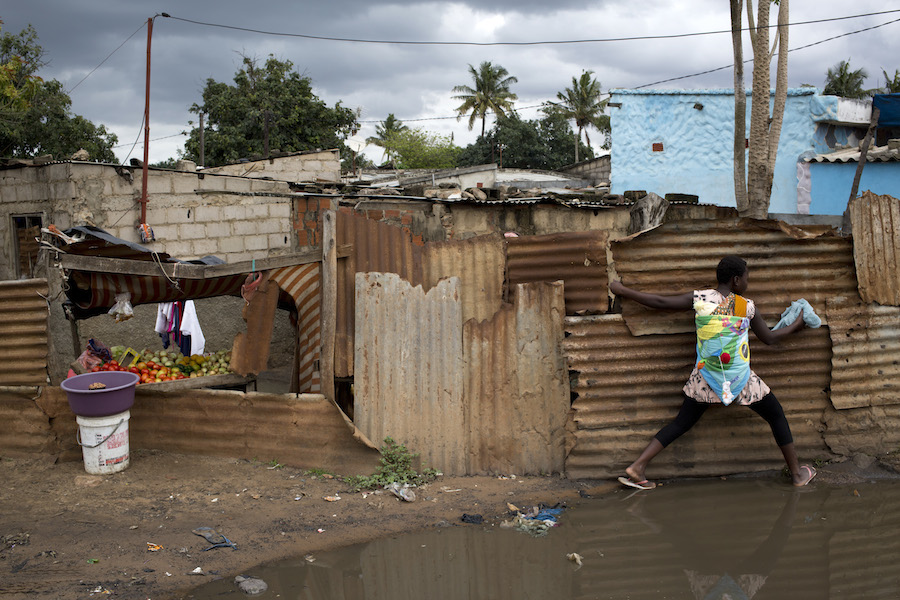 Viruses thrive in warm temperatures. And so the right climate conditions can trigger — and amplify — diseases like Zika, dengue fever and malaria, while heavier rains and flooding help waterborne diseases such as cholera and diarrhea spread faster and farther. Children's underdeveloped immune systems make them more susceptible to illnesses and their complications — malnourished children even more so. Facing even greater risks: those who live in areas where conflicts or natural disasters have shredded essential health services and infrastructure, and the urban poor and others who lack access to clean water and adequate sanitation. Above: a girl avoids floodwater outside the home of Yvonne Antonoia Mathe in Maputo, Mozambique. Yvonne, her four children, her brother, two sisters and their kids — 14 family members in all — share the home, and a single open latrine located behind a single sheet of corrugated iron. Diarrheal diseases remain one of the leading causes of death among children in disadvantaged communities like this one. © UNICEF/UN0139437/Prinsloo 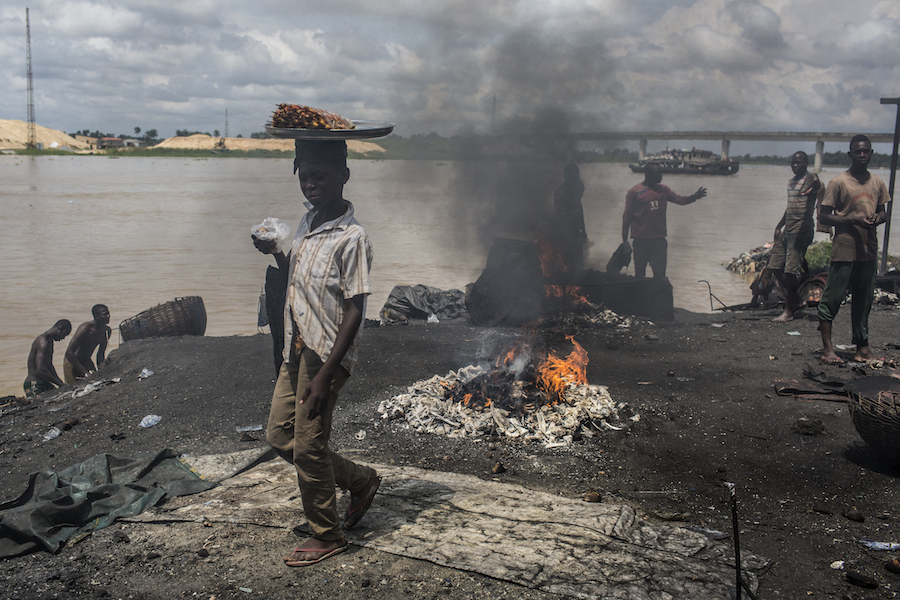 Every year, nearly 600,000 children under the age of five die from diseases caused or exacerbated by the effects of indoor and outdoor air pollution. Millions more suffer from respiratory diseases that diminish their resilience and affect their physical and cognitive development. Rapid industrialization and increased urbanization will only drive these numbers higher — "unless we act now" to curb emissions, former UNICEF Executive Director Anthony Lake wrote in the introduction to the UNICEF report, Clear the Air for Children. That 2016 report included the first ever analysis based on satellite imagery, which determined that some 2 billion children around the world live in areas where pollution levels exceed minimum air quality standards set by the World Health Organization. For as many as 300 million of those children, the levels are extremely toxic, or six times higher than acceptable under international guidelines.

Air pollution affects children more than adults: children breathe faster, and take in more air relative to their body weight; their immune systems are naturally weaker, leaving them more vulnerable to the effects; and their respiratory tracks are more permeable, so more toxins can enter their systems — and their still developing brains. Above: Rubber tires, electrical lines and other waste materials are used to keep a fire going for grilling meat outside a slaughterhouse in Yenagoa, Bayelsa State, Nigeria. © UNICEF/UN037170/Bindra 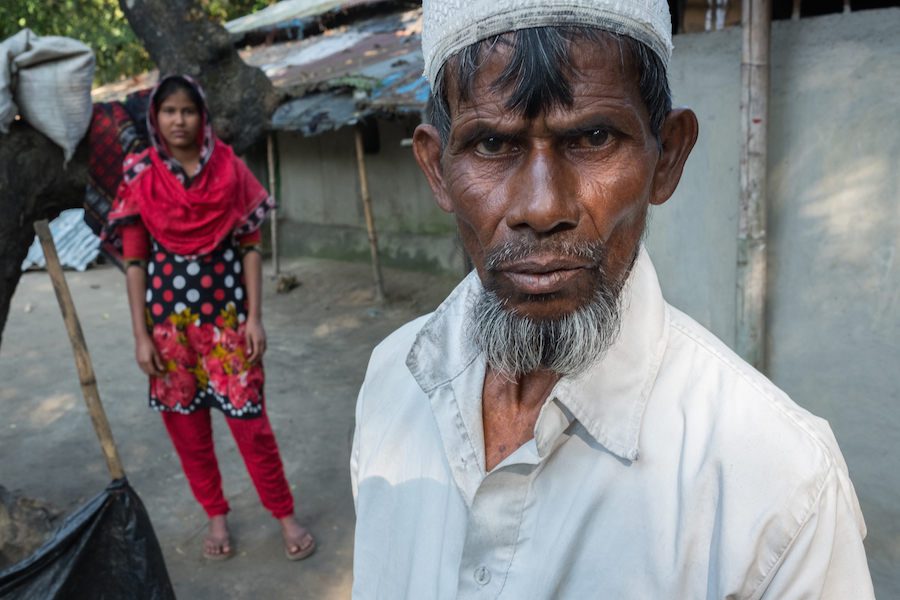 The advancing sea around Kutubdia, a low-lying island off the coast of Bangladesh, swallowed Nurul Haque's farm, leaving him landless and impoverished. He now works as a day laborer, and says he may have to pull his 13-year-old daughter, Munni, out of school. "I don't really want to marry her off, because it's not good for girls, but I'm considering it," Haque says. While child marriage rates have declined worldwide, particularly in South Asia, families facing economic crises, compounded by climate change, often see no other way. © UNICEF/UN0159775/Nybo 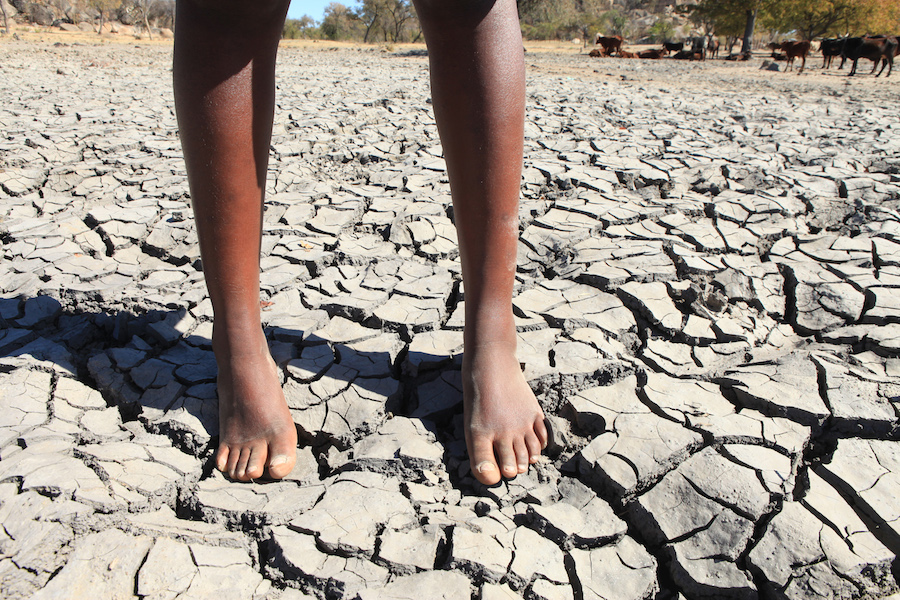 Seventeen-year-old Vanessa of Zimbabwe stands in the spot where she used to fetch water for her family. Africa has the world's highest number of children living in high or extremely high drought conditions. Those already living in drought-prone areas are more likely to be impoverished. © UNICEF/UN032913/Mukwazhi

Those who contribute to climate change the most rarely suffer the consequences. Take this quiz to gauge your personal impact on the environment compared to 15-year-old Nuredin from Ethiopia.

Top photo: A young boy hangs on to a ledge outside his flooded home in the San Julian district, Santa Cruz Department, Bolivia. Extensive flooding, the result of heavy rains linked to climate change and the effects of La Niña, damaged or destroyed homes, schools, health facilities, roads and other vital infrastructure in many of the country's poorest communities, leaving tens of thousands of families in need of emergency assistance. © UNICEF/UN0144148/Abramson