Since the start of the war in Ukraine on Feb. 24, the subway system in Kharkiv, the country's second largest city, has become home to thousands of people fleeing gunfire and shelling on the streets above.

Liudmyla Voloshenko, 41, is busy combing her 10-year-old daughter Sonia's hair in one of the train cars. "Today, my mother and I went home to wash our hair and get some things," says Sonia, leaning back in her mother's arms. "It was scary."

About 1,500 children and their mothers have taken shelter in 29 Kharkiv subway stations

Across Ukraine, millions of children like Sonia are paying the price every day, as the war takes it toll on their well-being, safety and education.

"It is very tough for us to stay here with children," says Voloshenko. "They want to go outside, they want to roller skate and ride their bicycles. They want to go to school and see their friends."

Because of the war, children in Kharkiv do not go to school. Instead, UNICEF-supported volunteers have set up children's spaces at subway stations, where teachers and psychologists work with children on a daily basis. 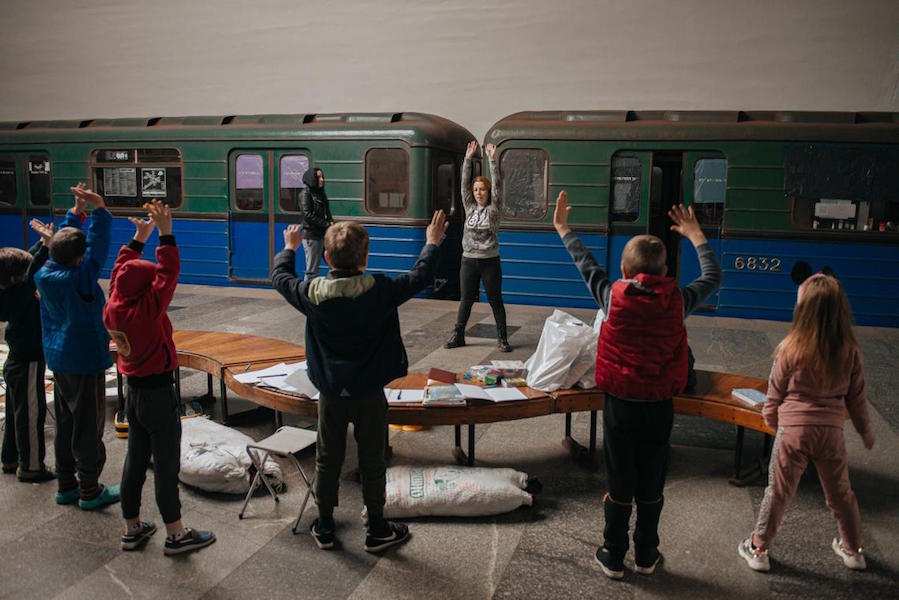 Yuliia Kruhlaia, 41, above center, is one of the volunteers. Before the war, she was a professional florist. Before that, she worked as a schoolteacher for ten years. Now she has decided to return to working with children.

"Due to severe stress, children experience insomnia, uncontrolled aggression and even mental disorders," says Kruhlaia. "To improve their emotional condition, we do warm-ups and breathing exercises. We are distracting them from the war." 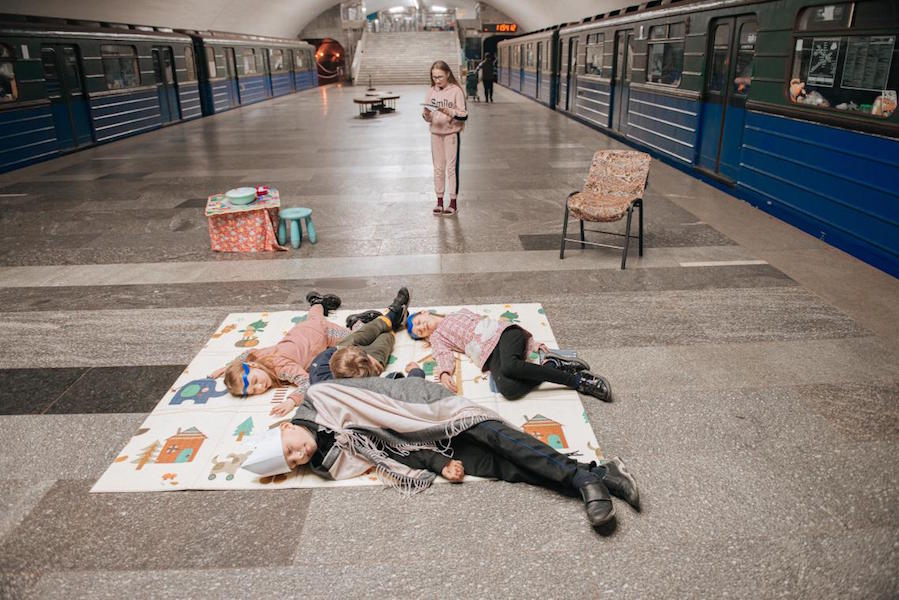 A play that Kruhlaia and the children had been preparing for four days finally premiered.

"This is a play about two planets: a good one and a bad one," explains Sonia, above, standing, who has become a director and playwright. "And a bad planet attacks the good one." 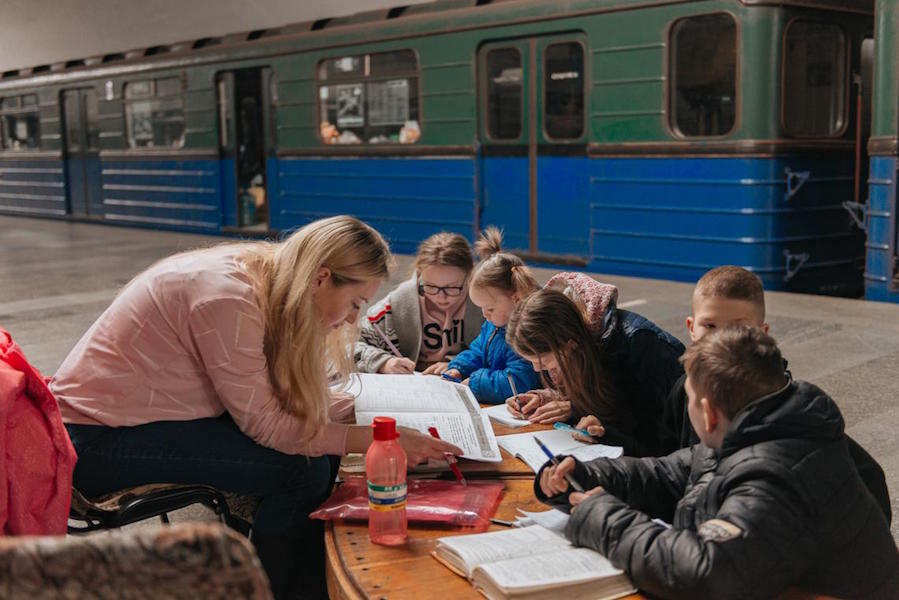 UNICEF has provided volunteers with materials for classes, including notebooks, pens and pencils, modeling clay and paints.

"There are around 1,500 children in 29 metro stations — from infants to 15-year-olds," says Maryna Ladyzhenska, 48, who coordinates educational activities for children in Kharkiv's metro stations. "It was UNICEF that provided money to equip playgrounds and spaces, to procure art supplies and toys, and to support the volunteer movement."

According to Ladyzhenska, some of the children have not ventured out of the station for four weeks. Many are afraid to step outside.

"The key problem is the decline in social contacts and lack of schooling," says Ladyzhenska. 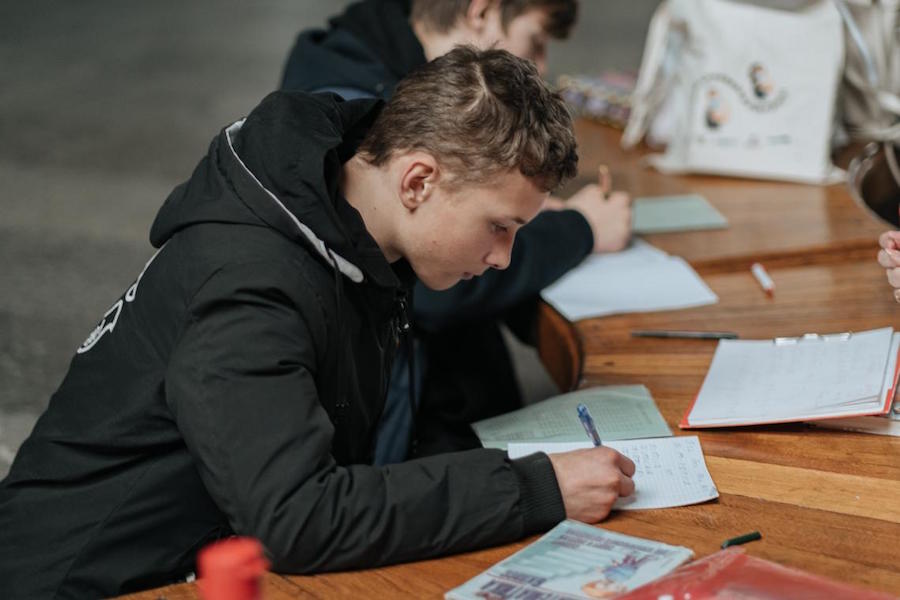 Fourteen-year-old Vadym, above, says that a shell hit his school, shattering all the windows. Now he and his mother are living in a metro train.

"Sometimes it's cold here," he says sadly. "But generally it's more or less okay. The classes here are not like a school where 30 people are sitting and someone understood the teacher's explanation and someone didn't. Here, they explain everything to you personally. You're not afraid to ask questions."

Teachers, psychologists, coaches and dance instructors are stepping up to work with children and youth underground

Teachers, psychologists, sports coaches and dance instructors have all volunteered to bring their expertise to the children living underground. "These are people who are involved in one way or another in education, formal and not formal," Ladyzhenka says proudly. "And now they have volunteered to work with children and youth."

For children like Sonia, the classes are life-changing. But nothing can make up for the most precious thing they have lost: Home.

"We now have two classes a day — math or Ukrainian, and then music," says Sonia. "I have made a lot of friends here. But I still dream of returning home, and that everything will be fine." 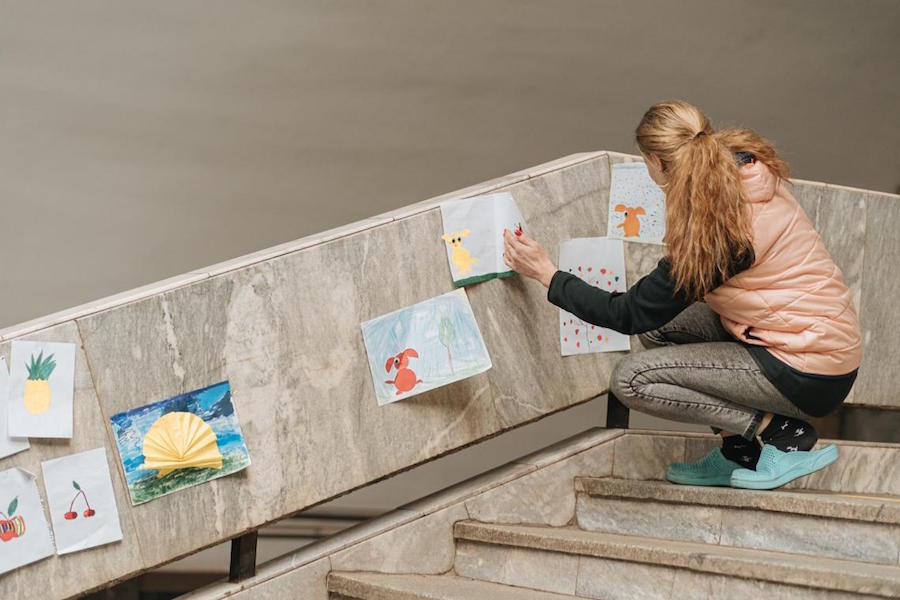 For the time being, the Kharkiv metro system remains the closest thing to home. Above, a volunteer decorates a station staircase with drawings created by children in an art class.

The war has taken a devastating toll on millions of people in Ukraine, particularly children and the vulnerable. In just six weeks, almost two-thirds of Ukraine's 7.5 million children were displaced from their homes; millions more are in desperate need of safety, stability and protection. 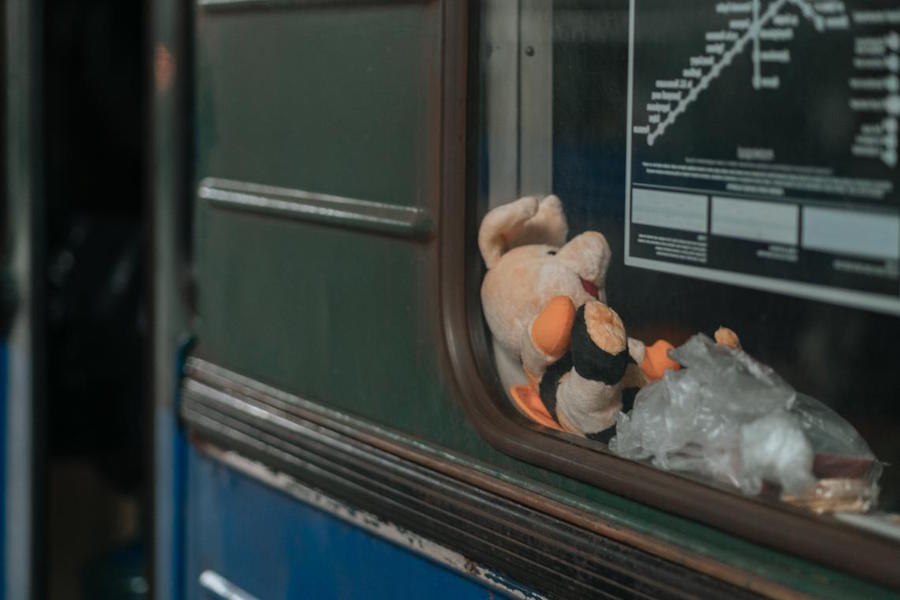 As the gunfire and shelling escalates, UNICEF Ukraine is making efforts to build the capacities and NGOs and youth organizations across the country, in order to address the mental health impact of the war on children, and promote the psychosocial well-being of those who have been affected by the conflict.

So far, more than 4,500 children and adolescents have participated in activities in Kharkiv's metro stations. UNICEF and partners plan to engage around 500 volunteers, educators and psychologists to help displaced children, adolescents and their families.

"Our goal is to support children, adolescents and youth with not only basic needs such as water, food and hygiene, but also educational opportunities and psychosocial support," says Liliya Lyubomudrova, Adolescent Development Officer at UNICEF. "Staying resilient, developing coping mechanisms and addressing traumatic experience is extremely important, especially for children and adolescents. It is a long marathon, and resilience is key for surviving the war and after."

Top photo: Liudmyla Voloshenko, 41, combs her 10-year-old daughter Sonia’s hair in one of the trains that have become home for thousands of civilians in the Kharkiv metro. Since the start of the war in Ukraine on Feb. 24, 2022, more than 4.3 million children have been forced out of their homes by violence. All photos © Khyrstyna Pashkina for UNICEF Ukraine