The flooding catastrophe in Pakistan may no longer be making news headlines, but as media attention — and humanitarian donor interest — wanes, there are 4 million children still fighting for survival, UNICEF Representative in Pakistan Abdullah Fadil said during a press briefing at UN headquarters in Geneva Tuesday.

"With homes destroyed, they are suffering a bitter winter, without decent shelter," Fadil said.

"You will have all seen the images that tell this heartbreaking story: villages turned into islands; children turned into orphans; families still living under scraps of plastic in literally freezing conditions." 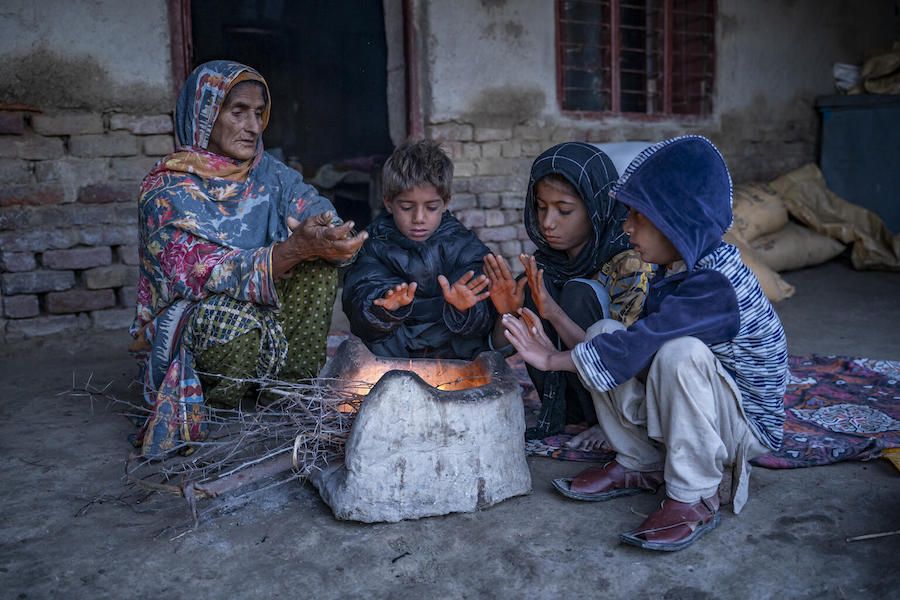 With up to 4 million children living in close proximity to stagnant and contaminated floodwaters, health and safety risks have soared, UNICEF reports.

"The numbers also tell a story – the story of an ongoing nightmare for the children of Pakistan," Fadil said.

"In the flood-affected districts, about 1.6 million children were already suffering from severe acute malnutrition, while another 6 million children suffer from stunting, a condition that can cause irreversible damage to children’s brains, bodies and immune systems." 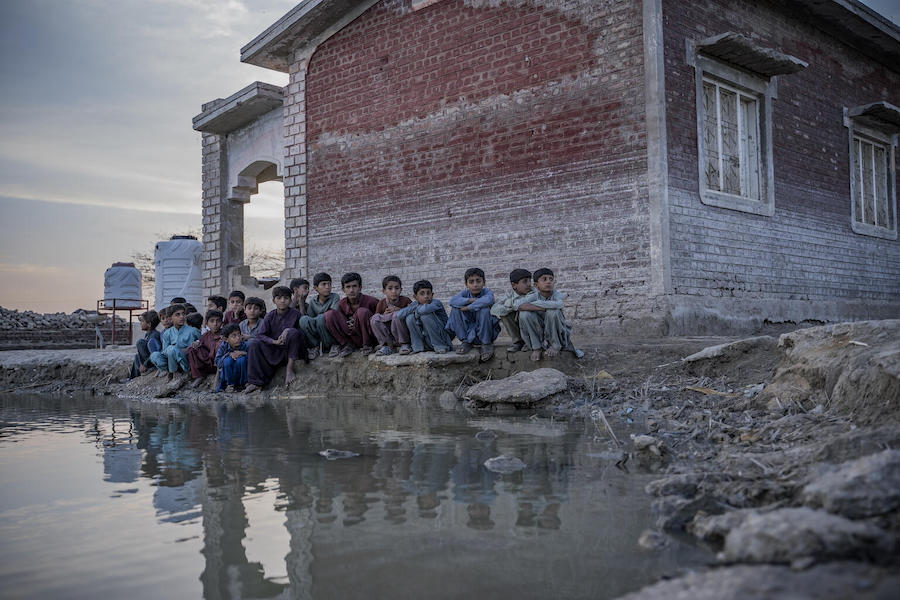 UNICEF warns that even though the rains have stopped, millions of vulnerable children in Pakistan are still living near stagnant and contaminated floodwaters and continue to require urgent humanitarian assistance. Above, conditions for children in Zangi Brohi Village, Dadu District, Sindh Province. © UNICEF/UN0761217/Butt

UNICEF has been on the ground in Pakistan for months, working with partners to deliver safe water, nutrition, health care and child protection services. Mobile health, nutrition and water teams are providing emergency support to affected children and families — focusing on "saving lives today," Fadil noted. Winter kits are being distributed and child protection efforts are being scaled up as risks of violence and other threats intensify.

Yet UNICEF's appeal for funding to support these emergency programs remains significantly underfunded.

That international donors pledged over $9 billion to help Pakistan recover from this latest climate catastrophe is "very generous," Fadil said, "but children must be at the center of recovery, rehabilitation and reconstruction efforts. Real economic recovery and sustained growth can only be achieved if we make the necessary investments to meet the immediate and longer-term needs of children."

Fadil continued: "It is also imperative that we invest in building human capital and resiliency, particularly in rural Sindh and Balochistan where much of the devastation occurred. These vulnerable communities need reliable access to essential services such as health care, nutrition, education, protection, hygiene and sanitation, especially those in remote and underserved communities." What many people don't realize, Fadil told UNICEF USA, was that so many of the districts that were "calamity hit" had already been struggling, with many families already impoverished, many children undernourished or malnourished, and anywhere from 55 to 75 percent of children out of school.

"And now these families, these communities have lost houses, livelihoods, crops, animals, health facilities," he said. "This was really a significant event for the country that will have consequences for decades to come." 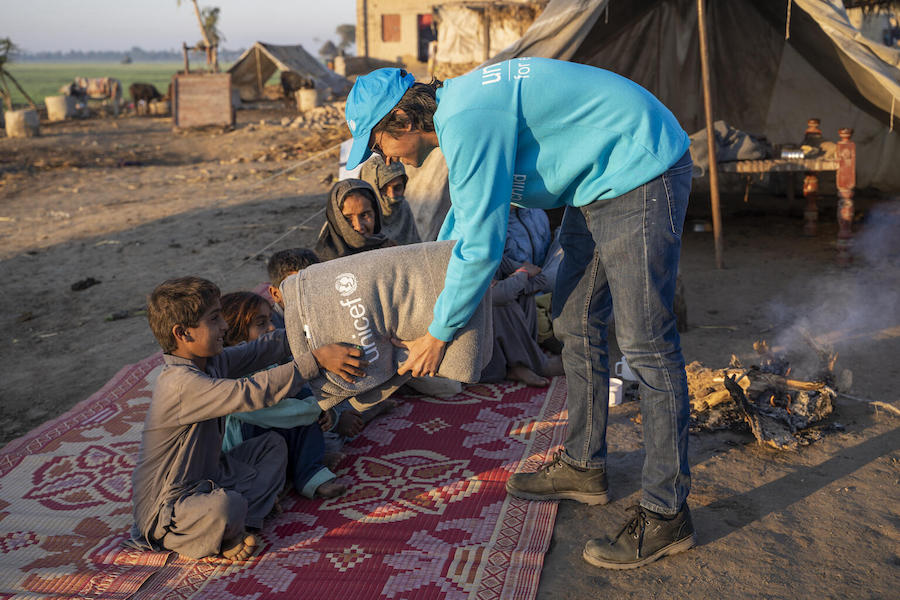 Looking back at the early days of the flood response, Fadil said there were bright spots. Fortunately, UNICEF had pre-positioned emergency supplies ahead of the 2022 summer monsoon season in Baluchistan, expecting there would be some impact from the rains; teams were able to act fast to deliver safe water by truck, anti-malarial medicines and bed nets, hygiene kits and other supplies. Response teams also set up over 4,000 latrines.

Even more encouraging is how community-level emergency response measures are being leveraged to serve longer-term goals in children's education, nutrition and other key areas. As floodwaters recede, and families start to return to their villages, and UNICEF works with partners to restore essential services, they are finding ways to build back better.

While rehabilitating flood-damaged water systems, for example, UNICEF and partners are also installing new boreholes in areas where safe water had long been inaccessible. While rehabilitating health facilities, teams are also looking to turn emergency health camps into permanent, functioning facilities — bringing health care to areas where seeing a doctor had been a rare luxury. 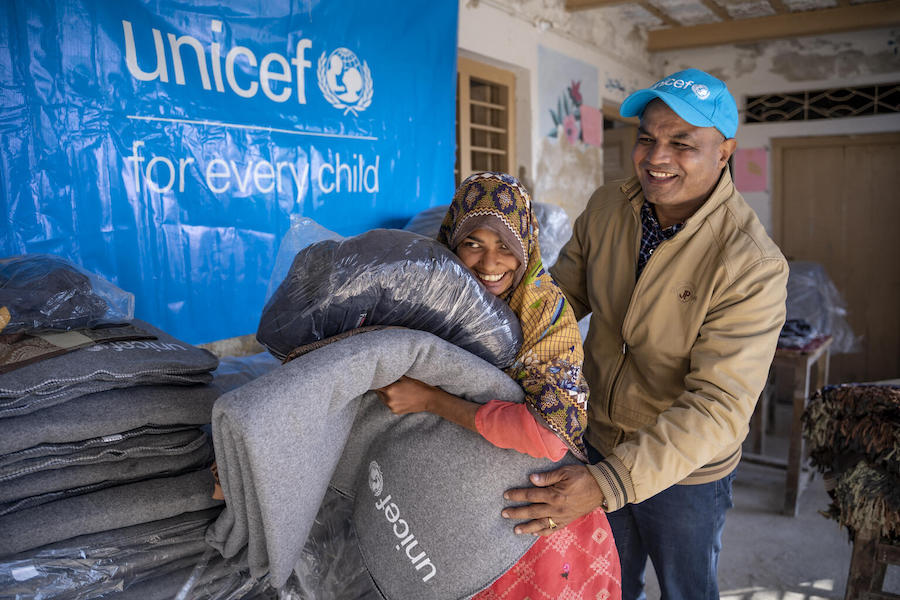 Education is another area where services are reaching some for the first time. After the floods, UNICEF set up over 860 temporary learning centers — or TLCs for short — reaching tens of thousands of children. Many of those reached had never attended school before, Fadil noted.

Some TLCs are mobile, and are bringing education to children in areas where formal schooling didn't exist.

"We're experimenting with mobile schools that are on the back of a motorcycle, that go into the community and stay open for, say, three hours," Fadil said. "We're bringing education closer" to families, he said. Students gather for a learning session at a pop-up mobile teaching unit — a way that UNICEF and partners are able to bring education into flood-devastasted areas, reaching many children who had never been to school before in the process. © UNICEF

To increase attendance and improve retention rates, UNICEF is also looking into having meals provided, by a partner agency or perhaps by local small businesses. Poor families in Pakistan are more likely to send children to work than to school, but if schools were to provide food, that could change, Fadil said.

UNICEF's role is often that of facilitator — working with partners including other UN agencies to develop and help implement complementary interventions; training local people to be teachers and health care workers; providing the resources and support a community needs to take over managing the local water system, or to run a local school meal program.

"When we talk about community resilience, this is what we are talking about," Fadil said. "These are the investments that need to be made."

Fadil emphasized another point in his interview with UNICEF USA: that what is good for the future of Pakistan, is also good for the world. For starters, Pakistan is the fifth most populous country, neighboring the first and second most populous countries, China and India — a combined population of 3 billion people. All three are nuclear power countries. Then there's the longstanding conflict between India and Pakistan. Afghanistan is another neighbor, as is Iran.

Pakistan floods a sign of more climate disasters to come

At this week's Geneva briefing, Fadil stressed UNICEF's need for flexible funding — unrestricted contributions from donors — in order to "double our efforts today" and to make long-term investments in Pakistan that address "persistent inequities that girls and boys have faced for far too long."

For Pakistan — a known climate hot spot — it is not a question of whether another large-scale climate disaster will strike, he said, but when.