Once again a country that is among the least responsible for climate change — Pakistan generates less than 1 percent of the world's carbon emissions — is bearing the brunt of its dangerous impacts.

The 'super floods' triggered by record rainfall have killed over 1,545 people since mid-June, including at least 552 children. Homes and entire communities have been washed away, leaving millions vulnerable to waterborne diseases, malnutrition and protection risks. UNICEF estimates there are 3.4 million children in urgent need of immediate aid.

An international group of climate scientists has concluded that climate change likely caused the deadly floods. “Girls and boys in Pakistan are paying the price for a climate disaster not of their making,” UNICEF's Pakistan Representative Abdullah Fadil said following a visit to devastated areas in Sindh Province.

While rushing to reach those in need with safe water, nutrition, medical care, hygiene supplies and other support, UNICEF remains committed to advancing longer-term solutions to climate hazards in Pakistan — work that has been ongoing for the past decade.

Not Pakistan's first flooding disaster — and unlikely to be the last

The current disaster is not the first time floods have caused a national humanitarian emergency in Pakistan. The super floods of 2010 were considered unprecedented in terms of their impacts, which affected 20 million people and left hundreds of thousands displaced for several months or longer.

Flash floods, landslides and heat waves have since become increasingly common in the country, while access to fresh air and safe, drinkable water has substantially decreased, according to UNICEF.

The fear is that impacts will only intensify as global warming continues. For every 1 degree Celsius increase, Pakistan — along with the the rest of the Indian subcontinent — is expected to see another 5.3 percent jump in precipitation during monsoon season, a rate that is above the global average.

The experts also noted there are a number of other factors contributing to the devastation currently gripping the country — namely, the close proximity of villages and farmlands to flood plains; inadequate infrastructure; limited capacity for risk reduction; an outdated river management system; and "underlying vulnerabilities" driven by high poverty rates and political and economic instability, among other factors.

Since Day 1 of the current disaster, UNICEF has been working with the government of Pakistan and other partners to provide emergency support to flood-affected families. There are 71 UNICEF-supported mobile health camps and also Temporary Learning Centers to help children cope with trauma. The Supply division dispatched 36 metric tons of emergency medical and other humanitarian supplies, its third shipment, late last week. 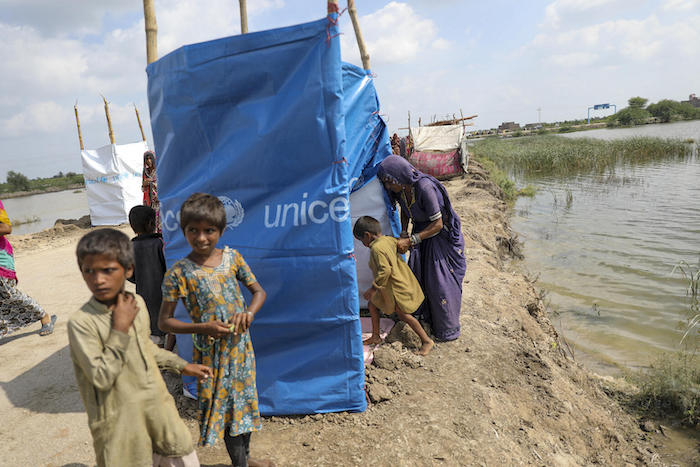 Mothers and children displaced by flooding shelter along the side of the road in Mirpur Khas district, Sindh Province, Pakistan. © UNICEF/UN0698645/Zaidi

Initial field reports indicated that the UNICEF-supported infrastructure was found to be effective in resisting the impact of the recent floods.

Building protection walls for water intake, reservoirs and public drinking water testing stations have also been found to help maintain access to safe water in areas where access is threatened by climate change impacts. By continuing to implement these and other measures, UNICEF aims to help reduce the impact of climate emergencies on essential water and sanitation services.

UNICEF and partners are also working to make Pakistan's education system more climate-resilient as well. Natural hazards such as flooding are cited as one of the key factors exacerbating already poor educational access in the country, especially for girls, according to a 2022 report.

It is not just the disruptions caused by an extreme weather event; when severe drought and other climate change-induced shocks force families to move in search of new livelihoods, children often become cut off from formal schooling, UNICEF has found. Ill health caused by increasingly harsh temperatures, vector- and waterborne diseases and environmental pollution is another obstacle to children's learning in Pakistan, according to UNICEF.

UNICEF is uniquely positioned to work with government and other partners to drive a child-centered response to climate change impacts in Pakistan, co-leading climate mitigating actions in the country while taking a 'Build Back Better' approach to emergency relief efforts.

As emergency response operations continue, UNICEF is also focused on:

UNICEF continues to call on all actors in Pakistan to align their priorities with climate-resilient policies and programs and to convene for purposes of encouraging national ownership of climate action; to initiate and foster climate-resilient investments and programming in high-risk regions while encouraging knowledge transfer to regions where systems are sparse or non-existent; and to scale up investment in child-sensitive and youth-responsive climate adaptation and mitigation measures.

Climate experts agree the situation is urgent: "Both current conditions and the potential further increase in extreme peaks in rainfall over Pakistan in light of human-caused climate change suggest that there is an urgent need to reduce vulnerability to extreme weather in Pakistan," their report on the recent flooding states.

Top photo: A boy flies a kite in a camp for people displaced by severe flooding in Pakistan's Sindh Province — in 2010. The latest climate disaster for the country triggered by record rainfall during the current monsoon has left 3.4 million children in urgent need of humanitarian aid. © UNICEF/UNI101464/Ramoneda