November 20 marks both World Children’s Day and the anniversary of the United Nations Convention on the Rights of the Child, the historic international treaty affirming the world's commitment to protecting kids' rights to survive and thrive.

It is also a day to highlight youth empowerment and engagement. In a generation facing climate change, war, lack of access to education and threats to mental health, we are seeing young people take action to help the most vulnerable. Youth are helping other youth through advocacy, community-building, fundraising and by speaking out.

To celebrate, we want to shine a light on a few youth changemakers who are addressing pivotal issues, tackling tough challenges and working to ensure every child is healthy, educated, protected and respected.

One of these changemakers is Sofia Parfomak, a 17-year-old senior at Bishop O’Connell High School and dual-enrollment student at Marymount University, both in Arlington, VA, who hosted a benefit concert to help children impacted by the war in Ukraine.

The plight of children displaced by conflict is deeply personal for Sofia, whose own grandmother, Janina, was 6 years old when she and her family were forced out of Ukraine in 1944. In the middle of the night, the family escaped by cattle car, ending up at a work camp in Nazi Germany, where they lived until the end of World War II. Sofia Parfomak's grandmother, Janina, (center) with her siblings in Ukraine in 1944. Later that same year, violence forced the children and their parents out of their home in the middle of the night. They ended up at a work camp in Nazi Germany. © photo courtesy of Sofia Parfomak

When Sofia saw the images of children fleeing Ukraine in 2022, she knew she had to do something: “I’m only in high school, but with the help of my high school friends and a few community organizations, I was able to put together a successful fundraising event for the public.”

A gifted singer who has been trained in voice since she was 5 and who has performed the national anthem at different sporting events, she organized and hosted a benefit concert with fellow youth singers at Walker Chapel United Methodist Church in Arlington, raising over $4,000 with all proceeds going to UNICEF. “It doesn’t matter how old or young you are," she said. "If you put in the effort and have the passion, you can really make a difference in the lives of others.”

It doesn't matter how old or young you are. If you put in the effort and have the passion, you can really make a difference in the lives of others. — Sofia Parfomak, 17

Sofia chose to donate the funds to UNICEF because after World War II, the camp her grandmother was in was supported by the United Nations Relief and Rehabilitation Administration.

“I wanted to donate to a similar United Nations relief agency because the UN helped my grandmother and her family," she said. "And UNICEF specializes in helping children, which reflects the age my grandmother was during that period of her life. Because of this, UNICEF seemed like the perfect place for me to donate." High school senior Sofia Parfomak, left, organized and performed in a benefit concert to raise money for children caught in the war in Ukraine. She chose to donate the money to UNICEF because her own grandmother, Janina, right, was helped by a UN agency in the aftermath of World War II. © photo courtesy of Sofia Parfomak

When asked what message she would like to send to others looking to help at this time, Sofia says, “The longer the war in Ukraine continues, fewer people will pay attention to it. But unfortunately, the children of Ukraine will continue to need help. Even when the war ends, rebuilding their lives and communities will be incredibly difficult.

"Do everything you can to remind people of their ongoing needs and that they will require our support far into the future," she continued. "But for those already working to meet those needs, thank you, because your efforts really help! My grandmother is still alive today because of what people like you did 80 years ago.”

Another issue young people are tackling by erasing stigma and raising awareness is the global mental health crisis, which the COVID-19 pandemic has exacerbated. One of the most effective ways to maintain one’s mental health is to talk about it and to hear and share the stories of others. That is precisely what a group of college students did when they hosted UNICEF USA’s first-ever Youth Mental Health Webinar on Nov. 15, 2022.

Throughout the hour-long webinar, they each spoke about their mental health journeys. Because so often these conversations don’t take place due to fear of shame and stigma, they made it their mission to do the opposite and have this honest and authentic talk as openly and publicly as possible.

Zen Bollos, 18, a freshman at Texas A&M University and a member of Houston’s Child Friendly Cities Initiative Youth Council, spoke about the challenges he faced growing up as the child of immigrants. He said he often pushed his feelings aside because he “felt the need to always be grateful for what his family gave him.”

He also spoke on the stigma surrounding men and mental health issues. Men face judgement, he said, and often feel they've been socialized “not to show emotion or never to cry” — something that he now strives to change through his work as an advocate. 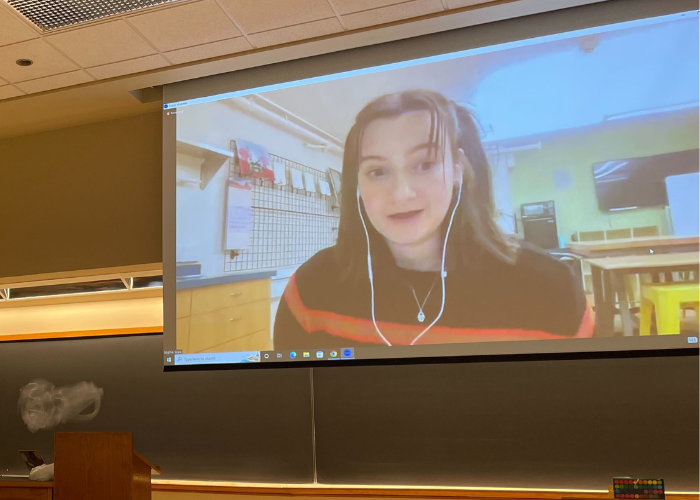 Similarly, Sophie Szew, 19, a sophomore at Stanford University, spoke about the importance of language for youth to express their feelings. As an eating disorder survivor and a descendant of Holocaust survivors, Sophie grappled for years with feelings of isolation when observing certain behaviors or thoughts she had but not having the words or tools to speak about them.

Everyone is an expert on their own experience, whatever that experience may be. — Sophie Szew, 19

As a result, she kept many of her lived experiences to herself. “If there’s no language to express how we’re feeling, does it even exist?” she asked. She now knows and wants young people to be aware that “mental wellness is a right and that everyone is an expert on their own experience, whatever that experience may be.”

Are you a young person looking to make a difference in your community while tackling global issues? Start a UNICEF Club today!

Top photo: Moved by news coverage of children and families forced out of their homes by the war in Ukraine, 17-year-old Sofia Parfomak, right, organized and performed in a benefit concert in Arlington, VA. She donated the proceeds to support UNICEF's humanitarian relief work for the children of Ukraine. Kate Stewart, 17, also performed in the concert. © photo courtesy of Sofia Parfomak