It has been almost a year since the war in Ukraine escalated, uprooting children and their families and turning day-to-day life into an unimaginable struggle. Intensified attacks on critical urban infrastructure in October destroyed 40 percent of the nation's power plants, leaving children to face the extreme winter cold without heat or electricity. Full-scale attacks continue across the country.

UNICEF was in Ukraine before the conflict began; in the months since, UNICEF has stayed and delivered, working around the clock to scale up lifesaving programs for children and their families. To keep children warm as temperatures plummet, UNICEF is distributing winter clothing kits, and extending child care services and humanitarian cash payments. Children's eyes light up as they open a UNICEF box to find a coat, pants, sweater, thermal underwear, socks, mittens and a hat.

UNICEF is also providing heating and fuel for schools, along with generators and heat pumps for hospitals. More help is needed: UNICEF stands with the children of Ukraine and will continue working with partners to support them through the war and beyond. 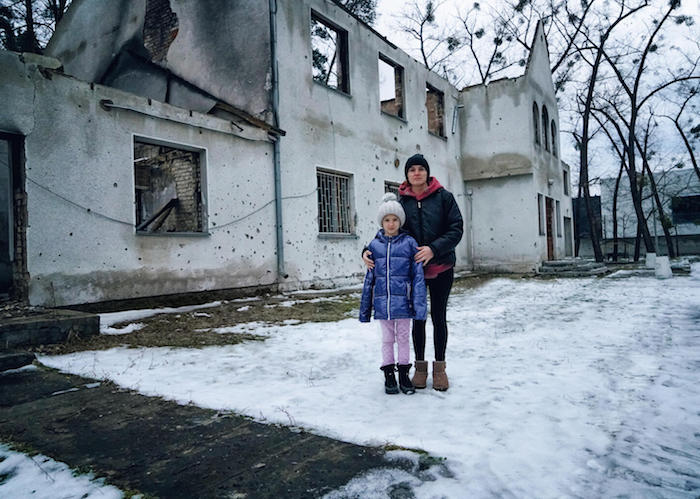 Eight-year-old Eva and her mother, Tamara, live in a 107-square-foot room in Dubky town, a temporary modular housing complex set up in the city of Irpin for families displaced by the war. The family's home was destroyed early on in the fighting. They lose power for eight hours at a time, and when water comes out of the faucet, it's icy cold. Eva and her older sister, Sofiya, wear three sweaters day and night. 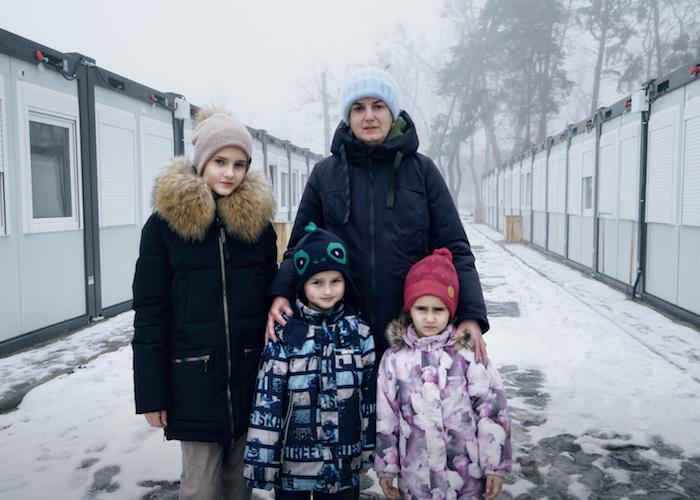 Tetyana and her children, 11-year-old Karina, 5-year-old Davyd and 5-year-old Oleksandra, also live in one of the units in the modular town — essentially rows of shipping containers, visible in the background. Until Feb. 24, 2022, the family's home was an apartment in a quiet, leafy town near Kyiv. The day after the shelling began, they fled with only a single suitcase. The bridge connecting Kyiv and Irpin exploded in front of them as they evacuated, terrifying the children. 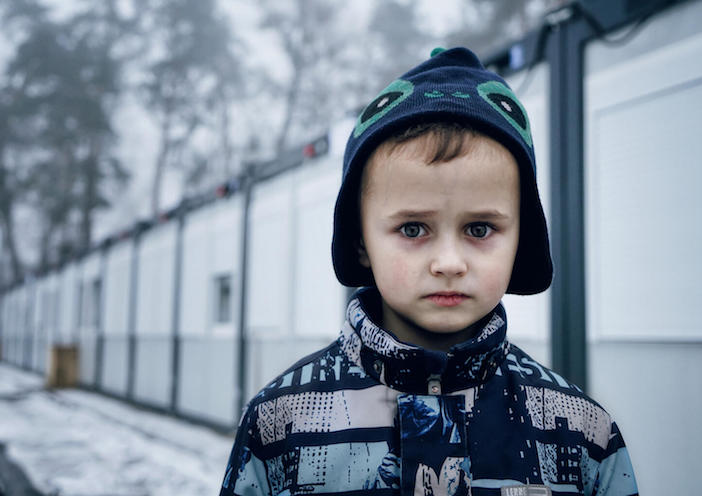 Not long after Tetyana and the children left home, their apartment caught fire and everything inside burned, including all the children's clothes and toys. Until recently, there was no heat in their temporary housing unit. The children began to get sick. Karina has asthma; Davyd, above, suffers from psoriasis. Tetyana spends all her money on medicine for her children. 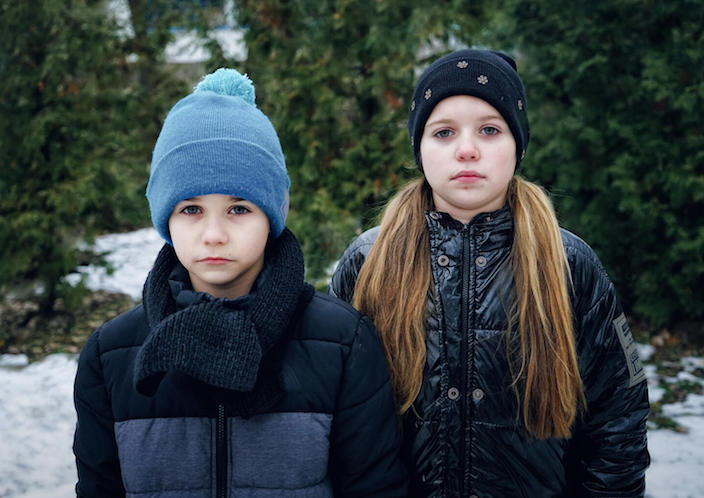 Eldar, 8, and his 10-year-old sister, Milena, live in Dubky town with their parents, grandmother and five siblings. They're trying to keep up with their studies online, but when the power goes out, so does the Internet, so they can't access their classes. Milena longs to return to in-person school. "I like going to school. Even though there are air raids now and you must go to the basement. Even if it's cold at school, I still really want to be there, not to sit online." 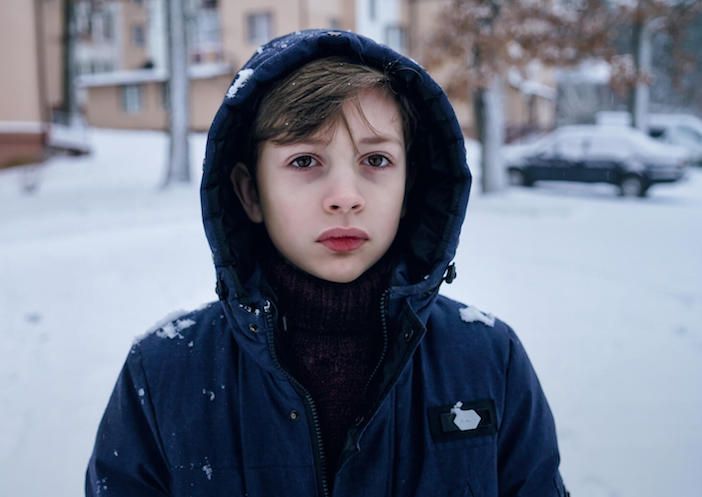 Seven-year-old Zhenya hasn't been in school since last February. "Because of the possibility of missile attacks on schools and kindergartens, my school is afraid to open," he says. He studies remotely, in between frequent blackouts. His parents heat pots of water on a gas stove to warm the room they share. It's already dusk by 4 p.m., and Zhenya is afraid to be home alone, so his mother brings him to work and he waits until she is ready to leave, late in the evening. At home, he turns on a battery-powered lamp and builds a cardboard tank. 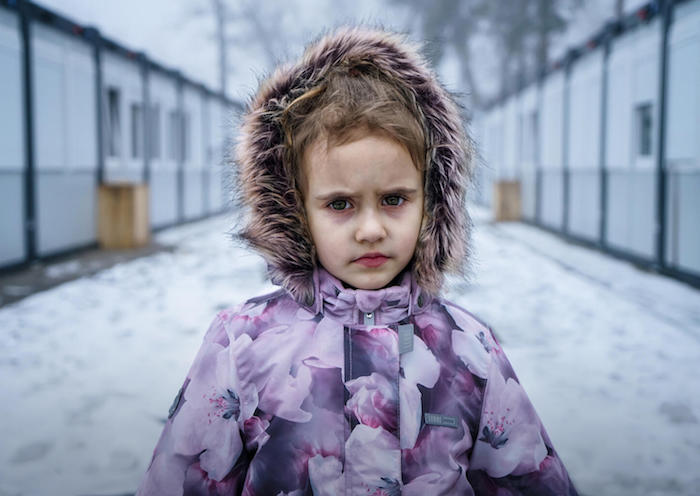 "The rules of war are clear — children and the essential infrastructure they rely on to survive must be protected," UNICEF Executive Director Catherine Russell said in December. "It is also essential that UNICEF and our humanitarian colleagues have the rapid and unimipeded access to children and families in need of humanitarian assistance, no matter where they are."

Top photo: Eight-year-old Eva shares a room with her mother and sister in a complex for people who have lost their homes in Irpin, Ukraine. The family's house was completely destroyed in the war. © UNICEF/UN0ALB44361/. All photos by Olena Hrom for UNICEF