Young people have a seat at the table in Houston, the first CFCI candidate city in the U.S., working closely with the mayor's office to define and tackle issues affecting their community.

UNICEF's Child Friendly Cities Initiative creates safe, equitable, inclusive and child-responsive cities and communities around the world. Since CFCI's U.S. launch in 2020, five cities and one county have partnered with UNICEF USA to pilot the two-year CFCI framework for action. One of these is the city of Houston, which through the CFCI has become a city that actively welcomes youth input and serves as the nation’s example of a city dedicated to creating a safe and secure environment for youth to learn and grow. 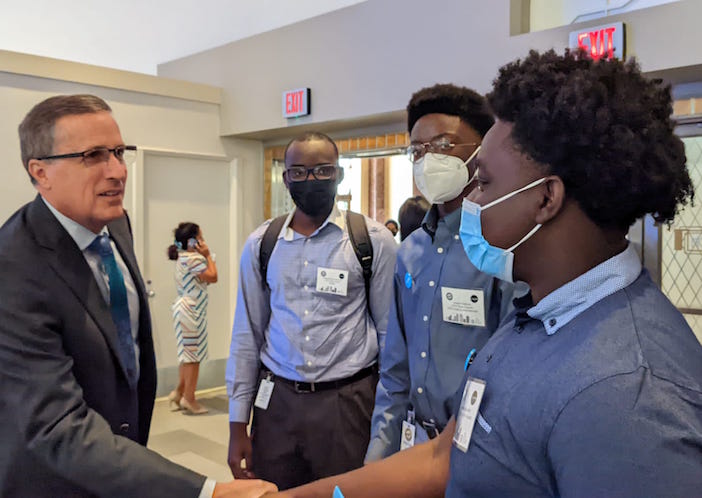 What is the Child Friendly Cities Initiative?

Launched globally in 1996 to protect children's rights in an increasingly urbanized and decentralized world, CFCI brings UNICEF together with local stakeholders to ensure children's needs and concerns are front and center in city planning and policy making. The initiative supports municipal governments in realizing the rights of children at the local level by using the framework of the United Nations Convention on the Rights of the Child.

The CFCI seeks to create and implement a data- and outcomes-driven, partnership-based action plan that secures and protects the rights of all children and elevates youth voice in local governance and decision-making. Since its inception, CFCI has been adopted in more than 3,000 municipalities in 57 countries.

"Houston is on track to become the first child-friendly city in the U.S., which impacts the 598,596 children of Houston and their future," said Houston Mayor Sylester Turner. "Even more importantly, this initiative has set a precedent for other cities to follow suit for a nation that helps protect and respect children's rights."

Under the leadership of Mayor Turner, Houston has for the past two years been dedicated to making a positive impact on the lives of children and youth and becoming the first city in the U.S. to receive the official designation of a UNICEF Child Friendly City. In the CFCI pilot program, a city is designated as a Candidate City once the administration has publicly announced its Local Action Plan. A city is then recognized as a UNICEF Child Friendly City after the one-year implementation period and demonstration of results based on their commitments outlined in the plan.

Houston's Mayor's Office of Education, which heads the initiative, has been working toward achieving this milestone by conducting a situation analysis, holding community conversations and developing a one-year action plan, which functions as a road map that explains and visualizes how the City of Houston and its partners will work together to address some of the challenges facing Houston's youth. This plan was created with input from youth, service providers and city leaders to strengthen the social safety net for children in the following priority areas: children's participation, mental health, resource accessibility and emergency preparedness. Members of the City of Houston Child Friendly Cities Initiative Youth Council were instrumental in the development of the city's Local Action Plan to strengthen the social safety net for children. © UNICEF USA

Alexavier Mendoza, 16, is one of the youth leaders involved in developing the CFCI Action Plan. A member of the City of Houston Child Friendly Cities Initiative Youth Council and the UNICEF USA National Youth Council, Mendoza reports directly to the mayor. UNICEF regards youth participation as the foundation from which all other goal areas are realized, as children should be a fundamental part of the decision-making that informs local action toward the achievement of each CFCI goal area.

In contrast, many school board meetings are dominated by the voices of parents and other adults, instead of letting students speak for themselves. The CFCI framework gives young people a platform to be heard on the decisions that directly affect them. Mendoza and other young people from across various council districts share their perspectives to evaluate programs and policies to achieve positive outcomes for Houston's youth. On August 11, Mendoza was in attendance at Houston City Hall along with other youth, city leaders, CFCI supporters and UNICEF USA President & CEO Michael J. Nyenhuis for a special CFCI child rights celebration to commemorate Houston's designation as a UNICEF CFCI Candidate City. During the signing ceremony, Mayor Turner announced the new city proclamation of an annual Child Friendly Day.

The CFCI is making progress in communities across the U.S.

Since CFCI's U.S. launch, other CFCI pilot communities — Decatur, Ga.; Johnson City, Tenn.; Minneapolis, Prince George's County, Md. and San Francisco — have also been advancing through the framework of action by engaging multisectoral stakeholders, conducting community conversations as part of their situation analysis and bringing together intergenerational groups of youth and adult allies for local action planning. This work has strengthened strategic planning and decision-making with and for children at the municipal level and improved relationships between youth and adults working together to improve community conditions, programs and services.

Prince George's County, for example, has focused its early efforts on ending youth homelessness and strengthening the capacity of the County and service providers to welcome newly arriving children predominantly from Central and South America in partnership with UNICEF USA. The County has launched a Children's Cabinet leadership team, including youth representation, to advance policies and practices that respect children.

Working in partnership with local schools, the city of Decatur completed its CFCI community assessments with 500 elementary, middle and high school students. The Decatur Youth Council voted to select survey items for children between the ages of 5 and 18. Approximately 160 middle school students cast their votes, along with 88 high school students. Students from kindergarten to fifth grade were surveyed through after-school programs at Decatur Housing Authority and the City of Decatur across nine locations. The city is currently working with youth and community stakeholders to analyze the data, prioritize the issues and develop a local action plan to address concerns. Early results indicate youth priorities center on safety, inclusion and equity. Every child and young person has the right to health, education, protection and participation. CFCI cities can make these rights a reality. This Youth Day, urge your mayor or municipal office to keep children top of mind in every policy and funding decision while engaging children and youth along the way.