Refugee students have stepped up to the challenges of the pandemic, showing remarkable resilience. Here's how UNICEF has helped.

Over one year into the COVID-19 pandemic, 600 million children are still out of school. Those kids who will work the hardest to catch up are refugee and migrant children who struggled to learn even before the crisis began. Chances are good many will never see the inside of a classroom again.  An estimated 23.8 million children—many of them girls—are projected to drop out of school permanently due to the pandemic.

Giving refugee students the digital tools they need to excel

Up against those odds, refugee students had to work even harder to keep up their studies once the COVID-19 school closures went into effect. 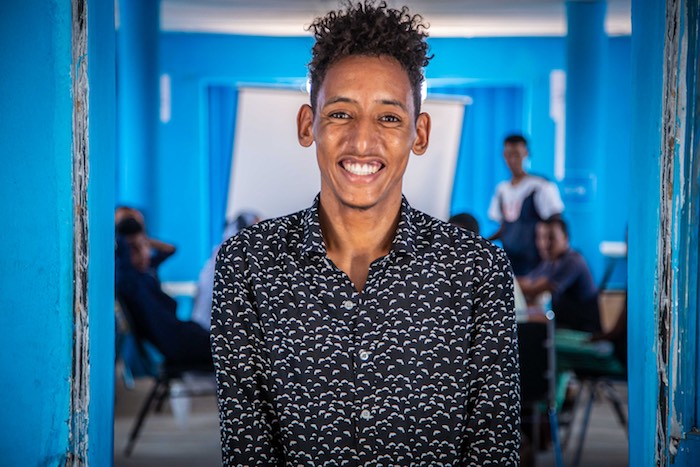 Eighteen-year-old Oussama struggled to learn in Mauritania’s M’berra refugee camp after COVID-19 shut his school down, relying on a smartphone and spotty internet. © UNICEF/UN0479645/Pouget

"It was a tough time," says Oussama, an 18-year-old who lives in M'berra refugee camp in southeast Mauritania. "After the closure of the schools, we had to learn on our own. Since I don't have a computer, I used to get up at one or two in the morning to do research on my smartphone. During the day, the internet is saturated, so I had no other choice."

Fortunately for youth like Oussama, those obstacles are ones UNICEF has been working to change.

Even before the appearance of COVID-19, UNICEF recognized the need to address the effects of digital exclusion on the education of vulnerable children. According to the UNICEF report, How Many Children and Youth Have Internet Access at Home?, two-thirds of school age children — at least 1.3 billion globally, ages 3–17 — lack connectivity at home. For kids whose homes are refugee camps, the barriers are even greater.

At UNICEF, we believe that as countries look to build peace, grow economies and climb the development ladder, they must dramatically expand education for all people, no matter who they are or where they live. And closing the digital divide is a critical step. — UNICEF Executive Director Henrietta Fore

"At UNICEF, we believe that as countries look to build peace, grow economies and climb the development ladder, they must dramatically expand education for all people, no matter who they are or where they live. And closing the digital divide is a critical step,” said UNICEF Executive Director Henrietta Fore at a UN Security Council meeting held last October on universal connectivity and access to digital technology in countries embroiled in conflict. “UNICEF is working with UNHCR to increase school connectivity in communities hosting refugees — while also designing and activating the tools that young refugees need to continue their education.”

At M'berra, UNICEF and partners did just that. After polling students and teachers about their needs once schools closed, they set up a computer center, equipped with everything required for learning in the 21st century and staffed by a team of trainers from the refugee community who manage the center. Now 700 teachers, administrators and students have the world at their fingertips, giving students like Oussama new hope for his future.

"In secondary school, we don't even have computers! If we had had the tools and knowledge [at the beginning of the pandemic], we could have easily studied at a distance. That's why I'm glad the center came into being," says Oussama, who finds his 30-minute walk to the center in Mauritania's hot sun well worth it. "I will continue my education and training in computer science so that I can then study at the university." When COVID-19 locked down all educational facilities in Egypt and postponed exams until further notice, Ahmed, a refugee from Somalia, was able to keep up his studies thanks to a UNICEF-supported learning program. © UNICEF/Egypt 2021/Mohamed Ragaa

Ahmed and his family fled the conflict in Somalia for Yemen only to find trading one war zone for another unbearable. So in 2018, they moved on to Egypt, where after having some trouble assimilating, he finally enrolled in school. But making the transition back to learning wasn't easy.

"I am supposed to be in my senior year in high school now, but I left school before finishing eighth grade,” says Ahmed, who was nevertheless determined. He diligently worked toward a placement exam that would enable him to move forward. But then COVID-19 hit and Egypt closed its schools indefinitely.

Ahmed could have despaired or even given up if it weren't for the UNICEF-supported Catholic Relief Services (CRS) program that helped him adjust to being a student again. Designed especially for African refugees, the Accelerated Learning and Life Skills program quickly adapted to the pandemic with UNICEF's help and took its educational, financial and psychological support services online.

"Online sessions were not just to encourage children to study and not lose hope," explains Jenny Ayman, CRS Education Program officer. "But to create a feeling of belonging and support through continuous interactions and discussions with us and their classmates."

According to Ahmed, the camaraderie and academic support made all the difference. During lockdown, he says, the sessions with teachers and classmates made "the long time we stayed at home pass quicker!" The kids he met in the program are now his closest friends and when he finally got to take his placement exam, he passed with flying colors.

During school closures in Serbia, a young girl asserts her right to education 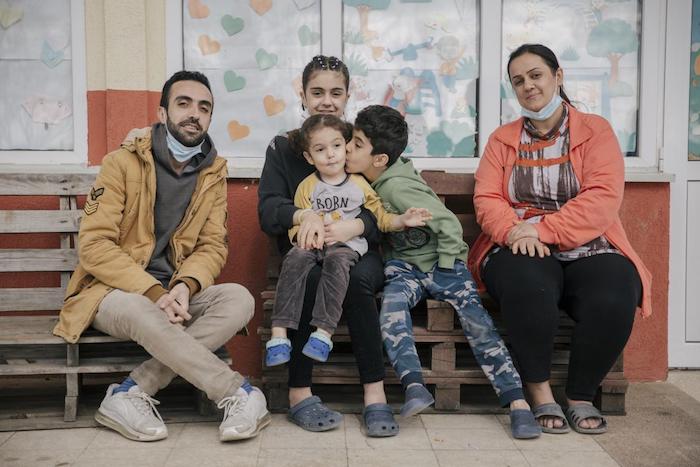 Through the Akelius program, refugee children like Roma (above center with her family at Serbia’s Vranje Reception Center) get online help with their language skills and digital competency. © UNICEF/UN0460686

Roma speaks five languages, loves to paint, has top grades in school and is known for her humor. Her accomplishments are all the more notable because since the 12-year-old fled Iraq with her family, she has been uprooted four times.

“First I went to school in Iraq for a year, then for three years in Greece and then another year in Bosnia,” explains Roma. She now lives in Serbia at the Reception Center in Vranje, where she is enrolled in school. But due to the pandemic, her classes — held just twice a week — are all online. She’s studying math and biology as part of a program tailored to her needs. But she has big dreams that will be hard to achieve on just two days of classes a week:

“I want to live in Finland and be a doctor or dentist," says Roma. "I think school is very important, not just for me, but for everyone.”

COVID-19 has continued to make it hard to learn. Many schools resumed in-person classes in January and February only to close their doors in response to Serbia's mid-March surge.

To help children maintain continuity, UNICEF and its partner, the Akelius Foundation, have been operating learning programs in Vranje and two other settlements for refugees and migrants since June 2020. UNICEF has provided tablets for children to use, giving them the chance to improve their digital skills during online sessions with local school teachers who have been hired to help. Ten-week online English language courses are also offered that even Roma, who has a knack for languages, appreciates:

“My English wasn't good, but here, when I go to online school, it is better than before.”

The course work help and emotional support teachers provide is important, says Gordana Radojkovic, who works with UNICEF's partner Indigo, which is assisting students at Vranje. But he hopes that in addition to the practical skills they are learning, students take away something else just as important.

“What we always emphasize in our work with children and parents is that education is their right," explains Radojkovic. "It’s the right of every child in the world. The things they learn here will be of practical use for them wherever they go.”