Students Are Calling Out for a Safer Future. UNICEF Is Listening.

On Saturday, March 24, students, teachers, parents and supporters took to the streets in a wave of anti-gun violence protest marches organized in response to the February 14 school shooting at Marjory Stoneman Douglas High School in Parkland, FL. Student survivors of the shooting, which left 17 people dead, organized the March for Our Lives in Washington, D.C., and the list grew to include over 800 sister marches in cities large and small around the world.

UNICEF supports children and youth everywhere who are using their voices to call out for an end to school violence. All children deserve a safe and healthy childhood, and the right to speak up on issues that matter to them, whether they are born in Eastern Ghouta, Myanmar, South Sudan or Parkland, FL.

Country by country, community by community, classroom by classroom, we must continue to create a culture of intolerance towards violence against children and young people — where violence is rightly seen as wrong, and where schools are always safe. #ENDviolence

UNICEF knows that listening to and magnifying children's voices is an essential part of putting children first. From working with governments around the world to align policy with children's rights, to empowering youth advocates to educate their peers on campuses from coast to coast, UNICEF has always done what it takes to strengthen children's voices.

UNICEF was founded in 1946 to provide relief and support to children living in countries devastated by World War II. In 1989, the General Assembly of the United Nations adopted the Convention on the Rights of the Child, a promise from the world to children: that we would do everything in our power to protect and promote their rights to survive and thrive, to learn and grow, to make their voices heard and to reach their full potential. UNICEF proudly supports this international treaty recognizing the universal human rights of children.

UNICEF advocates for the rights of vulnerable children worldwide

• UNICEF Clubs are student-led groups in the United States that represent the voices of youth worldwide. UNICEF USA has over 800 high school and college clubs across the country whose mission is to educate, advocate and fundraise for the rights of children everywhere.

• Advocates across the country have been asking their Members of Congress to support vulnerable girls' access to education by cosponsoring the Protecting Girls' Access to Education in Vulnerable Settings Act (H.R. 2408 / S.1580), an important piece of legislation, passed by the House of Representatives on October 3, 2017, that would direct the U.S. Government to increase access to educational, economic and entrepreneurial opportunities for displaced children, especially girls. UNICEF USA advocates are now turning their attention to the Senate to ensure that the U.S. Government makes education a priority for children uprooted by conflict and crisis.

• UNICEF USA advocates are asking Congress to protect women and children against violence by co-sponsoring the International Violence against Women Act (IVAWA) (S. 2120/H.R. 5034). An estimated 1 in 3 women will face physical, mental or sexual abuse in their lifetimes. IVAWA makes ending violence against girls and women a top diplomatic, development and foreign assistance priority for the U.S. Government, helping keep girls in school and protecting them from violence. 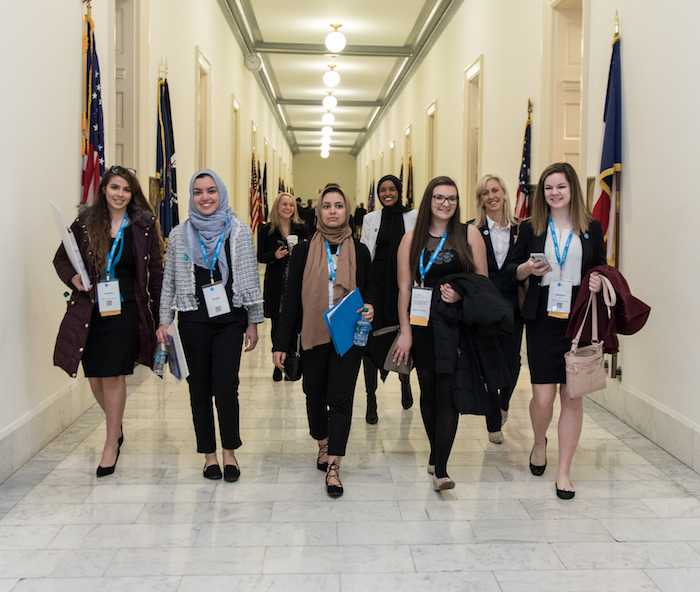 A fundamental part of UNICEF's mission is helping children all over the world go to school in a safe environment. An estimated 25 million children have been forced out of school in conflict zones around the world. UNICEF is working to help all children get the education they deserve, free from violence, abuse and danger.

• Brutal violence has driven an estimated 1.2 million Rohingya out of Myanmar and into Bangladesh.UNICEF education staff have set up hundreds of learning centers in Bangladesh where traumatized Rohingya refugee children can go to learn, play and feel safe again. The plan is to increase the number of learning centers to 1,500 by the end of the year, reaching 200,000 children.

• Syria's seven-year civil war has jeopardized the education of an entire generation. At least 1.75 million Syrian children remain out of school. UNICEF has set up informal learning centers for internally displaced Syrian children and refugees. In Lebanon, UNICEF is working with the Clooney Foundation for Justice to help 3,000 out-of-school Syrian refugee children get back on track.

• In South Sudan, many schools have closed as a result of the ongoing war. In the past two years, UNICEF's Education in Emergency initiative has provided safe spaces and educational materials to help 680,000 displaced and refugee children who have been forced out of school get back to learning. In 2018, UNICEF plans to establish 405 more learning spaces and train 4,000 teachers.

Today's children are citizens of the world. And our goal is to build a world that is fit for all children. This weekend, as children and teens march for what they believe in, UNICEF is proud to celebrate these young changemakers by amplifying their voices and joining them in their fight for a better future.

Click here to advocate for youth voice to Members of Congress.

Photo at top: Students from 50 states gathered in Washington, D.C. for the 2018 UNICEF USA Student Summit in March. Photo courtesy of UNICEF USA.