JAFARABAD, Pakistan – From a distance, the scene looks harmless. We’re driving along an elevated road through Jafarabad, a district in Balochistan, in the southwest of Pakistan, surrounded by water that stretches as far as the eye can see.

But these waters shouldn’t be here, and beneath their stagnant surface lay the remains of homes and lives swept away by unprecedented monsoon rains. For those left behind, these floodwaters are filled with unseen dangers — snakes, waterborne diseases — that are posing yet another threat to families who have lost almost everything.

Only the top of the occasional structure is visible above the stagnant floodwaters swamping Balochistan Province, southwest Pakistan. © UNICEF/UN0712716/d'Aki

Nazira’s is one of these families.

“It was night when we heard the loudspeaker at the mosque. Someone said that the waters were rising and coming towards us,” says Nazira’s husband, Hassan Khan.“We ran for our lives. We couldn’t take anything with us.”

It’s a familiar situation for many of the more than 7 million people in Pakistan who have been displaced by the floods, a tragic story I hear over and over as I meet with families. 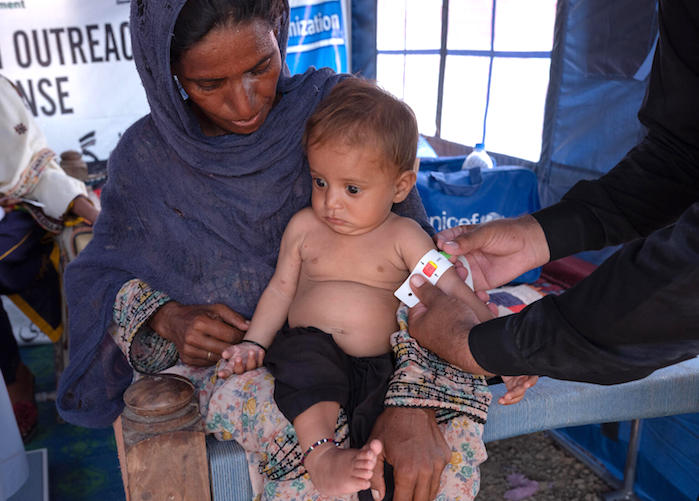 Nazira brings her son Naqibullah to be screened for malnutrition at a UNICEF-supported mobile health center in Balochistan. A health worker wraps a band around his mid-upper arm to measure its circumference. Measurements in the red indicate a child is suffering from severe acute malnutrition. © UNICEF/UN071724/d'Aki

Nazira and Hassan Khan are sheltering at a camp that has been set up by local officials for displaced families. Along the narrow road to the camp — one of the few slivers of dry land in the area — families have erected makeshift shelters, leaving many children to sleep on the ground just feet away from speeding cars and trucks.

Here and there in the distance, the roofs of submerged buildings hover over the surreal floodwaters, which may take months to fully recede. Water is everywhere, but none of it is safe to drink. Still, some children — driven by thirst — drink it anyway, putting them at risk of serious illness or even death.

As we arrive at the camp, some people shout out at two small boys who have entered the water to try to reach a water buffalo. A dark shape is winding its way towards them. The boys make it out of the water just before the snake can reach them.

People at the camp say they have been bitten by snakes and stray dogs. Others say they worry about scorpions and dengue fever, a viral disease that is transmitted by mosquitos. Mosquitoes, which flourish in these stagnant waters, are out well before nightfall, swarming around the many homeless families sheltering here without fans or bed nets to protect them. 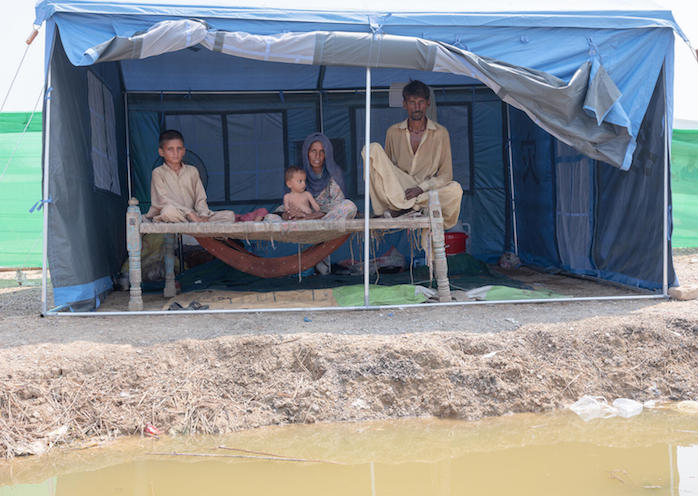 Nazira and Hassan Khan and their children shelter in a tent at a camp filled with people forced out of their homes by catastrophic flooding in Balochistan, Pakistan. © UNICEF/UN0712727/d'Aki

For now, a single tent is home for Nazira, her husband and their three children. Nasir Ahmad, 8, is sitting on the only piece of furniture inside the family’s tent — a  charpoy, a light bed frame made of wood and strung rope. His 18-month-old brother, Shoaib, is sleeping next to him, exhausted by the unbearable humidity.

“My home was better,” Nasir Ahmad reflects. “There’s nothing to do here. Sometimes I play hide and seek with my friends who reached the camp. The rest of the time, I feel bored and sad. I miss home.” 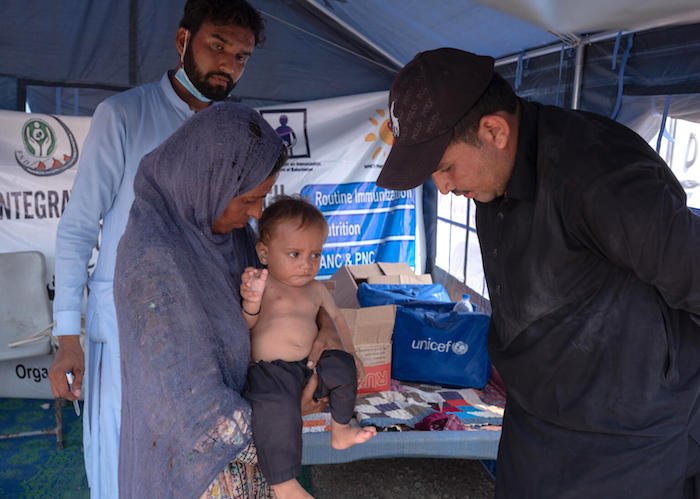 At UNICEF-supported mobile health units deployed across Pakistan, children are being treated for severe acute malnutrition and waterborne diseases. © UNICEF/0717124/d'AIki

UNICEF and partners have established dozens of mobile health units providing children with lifesaving medicines to treat acute watery diarrhea, respiratory infections and skin conditions as well as the type of therapeutic food supplement given to Naqibullah.

But even before the floods, more than 50 percent of children living in the area were stunted, says Sheraz Ali, a UNICEF nutrition officer, referring to a condition caused by chronic undernutrition that can cause irreversible damage to children’s brains and bodies.

As the floodwaters slowly recede, a second wave of the flooding catastrophe is unfolding with the spread of waterborne diseases as families struggle to find sufficient safe water.

“Now these frail infants are also suffering from severe acute malnutrition, diarrhea and malaria. Most of their mothers are malnourished, too,” Ali says. 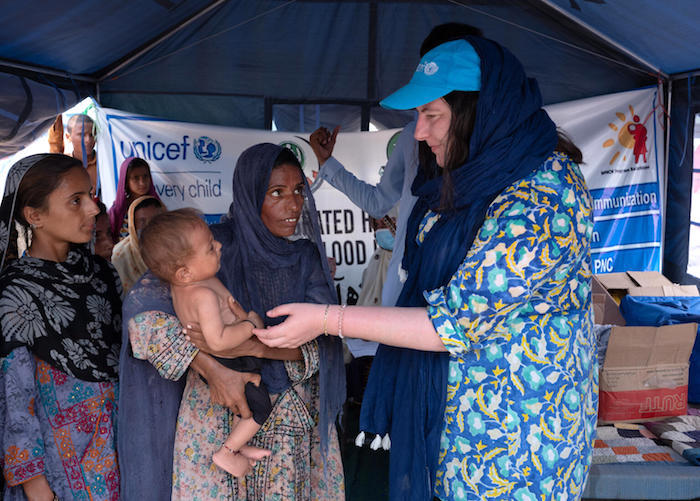 Nazira says that Naqibullah is doing better but adds that she still worries about him. She has spoken with other mothers whose children have seemed to be recovering, only to fall ill again. Ensuring the health of these displaced children, suffering the effects of a climate-induced crisis for which they bear no responsibility, will require many more resources and supplies.

“All I want now is a place to live, and food, and medicine for my children,” Nazira says.

Catherine Weibel is UNICEF Chief of Advocacy and Communication in Pakistan. This article originally appeared on UNICEF.org.

Top photo: Rising floodwaters forced Nazira and her children out of their home in Balochistan Province, Pakistan. They are living in an open-sided tent beside stagnant water. © UNICEF/UN0712731/d'Aki>