Eastern Aleppo has become a living hell for children. UNICEF Syria's Country Representative reports on the state of children in the embattled city and other besieged areas where half a million children are trapped in deteriorating conditions.

Since renewed fighting in east Aleppo on 24 November, at least 40,000 people have been displaced within and from the area. Half of them are children.

Displaced families have been transported to the industrial district of Jibreen where they are temporarily housed in a large warehouse turned in to a shelter. Some have left the shelter to stay with relatives elsewhere. Their living conditions in the camp are very basic, cramped and freezing. As rain pours through leaky roofs and broken windows, families huddle together inside.

AMMAN (December 19, 2016) – “This morning, all 47 children trapped in an orphanage in east Aleppo were evacuated to safety, with some in critical condition from injuries and dehydration.

“The evacuation of these orphans, along with thousands of other children from east Aleppo in the past days is a glimmer of hope amid a grim reality for the children of Syria. Their safe departure is a testimony to the relentless efforts of humanitarians on the ground, working around the clock for children and their families.

NEW YORK (December 16, 2016) – “More than 2,700 children have been evacuated from east Aleppo in the past 24 hours, including some who were sick, wounded or without their parents.

“However, hundreds of other vulnerable children, including orphans, remain trapped inside that part of the city. We are extremely concerned about their fate. If these children are not evacuated urgently, they could die.

“UNICEF and our partners are on standby with transport and teams to evacuate these children to safety. We implore all parties to the conflict to let us do so safely and immediately.”

I have just travelled back from Aleppo, where the situation continues to plummet to even greater lows.

When I was there nearly 100 mortars fell on west Aleppo in a couple of days. While at the same time, only a few hundred meters away we witnessed the unrelenting bombardment of the eastern side of the city.

There is no safe place in Aleppo. Even going to school can be a matter of life or death.

My colleagues told me that they hid in bathrooms and basements as the attacks continued. There was little sleep that night. The very same staff came to work in the morning with the same energy, as if it was just an ordinary night. 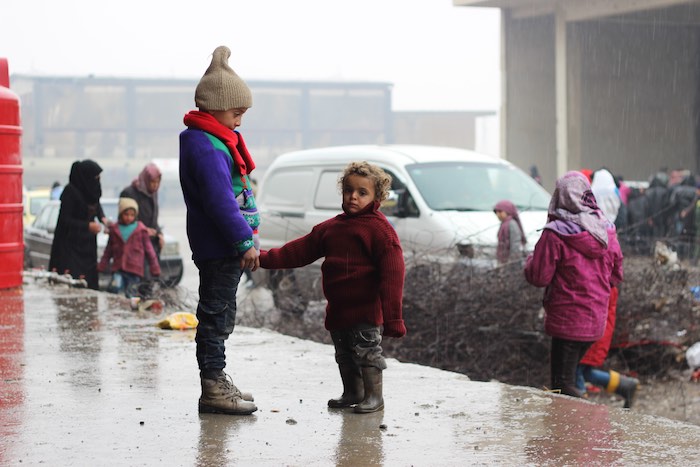 Rain falls in the yard of a large warehouse in Jibreen, Aleppo, now used as a shelter for thousands of families who fled violence in east Aleppo. It is reported that some 31,500 people have been displaced from and within the area since 24 November, including around 19,000 children.

Relentless Shelling, Even for Syria

Even by Syrian standards, the recent bombardment and shelling have been the most intense in Aleppo. Some 31,500 people have been displaced from east Aleppo in just 10-days. At least 50 percent of the displaced persons seem to be children.

I travelled to one of the shelters for displaced persons in Jibreen on the outskirts of the city. It’s a large warehouse where families huddled together on mattresses on the floor. The damp and piercing cold made the conditions even tougher.

Children shared stories to the soundtrack of the deafening noise of explosions.

To the soundtrack of the deafening noise of explosions and firing of heavy weapons, the children, who were attending psychosocial support activities, shared some stories. They told of how they cowered for days and weeks in dark and damp basements in fear of the shelling in besieged east Aleppo. They shared their dark memories of destruction, and the smell of dead bodies under the rubble.

There was little sleep that night, but the same staff came to work in the morning with the same energy, as if it was just an ordinary night.

Then I visited Hanano, a neighborhood in east Aleppo that was retaken by government forces on 27 November. More than 6,000 people have returned.

The destruction was massive. Unexploded ordnance scattered everywhere. Apartments were gutted, hospitals nearly destroyed and schools completely damaged except for two that could be rehabilitated.

But surprisingly people were still going back. To try and rebuild their shattered houses and lives.  For you see, people just want to go home.

Despite wanting to return, there is no safe place left in Aleppo. Even going to school can be a matter of life or death. This year there have been 84 attacks on schools in Syria with at least 69 children losing their lives and many others injured while being at school.

In response to the latest displacement in Aleppo, UNICEF staff are working around the clock to make life a little more bearable for children.

Winter clothes are being distributed and water is being trucked to shelters and areas where people are returning, like Hanano.

We are providing fuel, repairs and maintenance of Aleppo’s water network so 1.2 million people have access to safe water.

Nearly 7,000 children and mothers have been reached with critical routine immunizations.

We are providing fuel and repairs so 1.2 million people can access safe water.

Mobile health clinics have screened over 1,600 children for malnutrition and distributed nutritional supplements.

Mine risk education and psychosocial support services are reaching some 6,000 children.

These simple immediate interventions can save lives.

.@UNICEF & partners educate displaced families from East #Aleppo on mine risks as they are exposed to unexploded remnants of war pic.twitter.com/CPQsiowvPm

A Dire Situation, A Severe Need

Although the world’s attention is on Aleppo, sadly the scale of suffering is widespread. East Aleppo is one of 16 besieged areas, where we estimate that nearly half a million children remain trapped amid worsening conditions.

Madaya – home to 45,000 people – is another of the besieged areas. When I last went with our team to the town I was shocked by what I heard. People surviving on leaves and grass.

I was taken to what was called the "health center". It was, in fact, one room in the basement of a house. Ushered into the semi-darkness, I was met by the sight of limp bodies lying on blue blankets on the floor.

The "health center" was, in fact, one room in the basement of a house.

The doctor, the only pediatrician in town, took me to the one and only bed. It had what appeared to be two bundles.  As I looked closer in the darkness I was startled. It was actually two skeleton like young men. They were drifting in and out of consciousness.

Even with the extreme deprivation, we got right to work trying to halt locals' downward spiral of starvation. We conducted training on how to use the therapeutic food and treatments we brought with health workers and volunteers present.

The sad reality of #Syria's children: two boys displaced by fighting in #Aleppo have to burn anything they can find to keep themselves warm. pic.twitter.com/5lWuzLmYBX

A Reason for Hope

In my daily work I have always been in awe of the extraordinary stories of children’s determination and resilience. Like the 12,000 children who risked their lives to cross active conflict lines, to sit for their national final exams. These courageous youngsters will build the future Syria.

The children of Syria are not giving up and nor can we. UNICEF is committed to doing what we can to support them and to provide opportunities wherever we can.

And so we work: In 2016 alone, we provided 3.2 million children with text books and school supplies - rehabilitated schools and added thousands of temporary learning spaces.

In 2016, we provided 3.2 million children with school supplies, rehabilitated schools and thousands of temporary learning spaces.

With UNICEF, routine immunization coverage has been boosted from a national average of 50% to 75%. Polio vaccinations stopped the deadly disease - with no new cases for almost three years.

Syrian families, and Syrian children, have one major desire: to return to their homes, to live in peace, and contribute to the reconstruction of their beautiful country. We need to provide them with the opportunity to do just that.

Stand For Hope: Please support UNICEF's efforts to help the children of Syria.