Learn the stories of six children who traveled across conflict lines to continue their studies — with undying hope of building a brighter future for their country.

Shushan Mebrahtu is a communications and media specialist for UNICEF. She has worked in Syria and Niger, among other countries.

DAMASCUS, Syrian Arab Republic – What would you do if the only way you could sit for your high school exams was to travel for 13 hours through countless checkpoints manned by heavily armed fighters? How would you feel if 12 years of hard work to get your diploma was in vain because of a war that never seemed to end?

These are some of the harsh realities facing Syrian school children today.

“The journey was very expensive,” says Hadi*, a ninth grader who risked a dangerous 13-hour journey from his home in rural Aleppo across conflict lines to reach an exam center in Aleppo city. “My family had to pay 15,000 SYP (about US$35) to cross the conflict lines.”

Hadi couldn’t reach Aleppo on his first attempt because the road was blocked by ongoing fighting. But he was determined to sit his exams and kept trying. He decided to take another, much longer route. In peaceful times, the same trip would have taken him four hours to complete. But this time it took three attempts on dangerous roads before he succeeded. 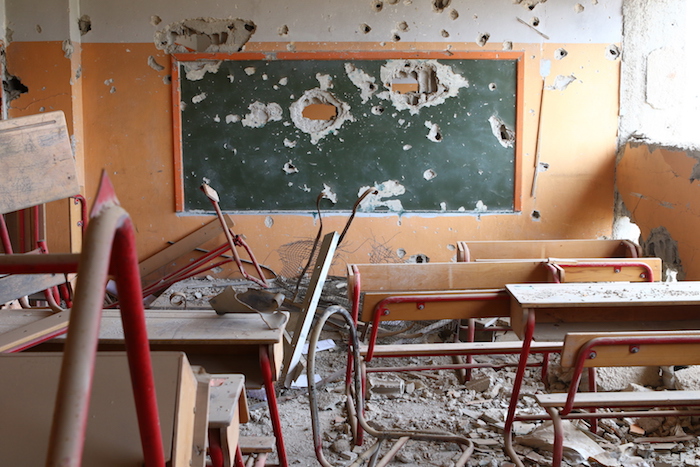 A primary school in Hujjaira, in rural Damascus, was devastated by continuous violence in the area. Students cannot return to their damaged school. ©UNICEF/UN018882/Abdulaziz

In May and June this year, 10,530 Syrian students in grades 9 and 12 made the difficult decision to risk crossing active lines of conflict to reach the examination centers where they could sit for annual national exams. UNICEF supported students who came from hard-to-reach and besieged areas by providing education bursaries, safe accommodation, mattresses, soap bars and other hygiene supplies, as well as revision classes to prepare for exams.

Some students had to confront armed groups who did not want children to leave for exams.

Each student’s journey involved different risks. Some had to confront or avoid armed groups who did not want children to leave for exams. Most traveled on dangerous, conflict-affected roads, facing countless checkpoints where they were constantly questioned by armed men. Many had to borrow money from relatives to cover expenses for the journey, which sometimes started weeks or even months before the exam period. It took immense courage for girls and boys in conflict-ridden areas to insist on their right to an education.

Bravely crossing active conflict lines, over 10,000 children this year made difficult journeys to sit for national exams in Syria. Sixteen-year-old Maya, who dreams of being a journalist, is one of them. Some students coming from areas severely affected by the conflict spend the entire two-week exam period at a UNICEF-supported school-turned -helter.

In the Syrian Arab Republic today, ordinary choices about whether to send a child to school or to a playground often become tragic life-and-death decisions, as schools and playgrounds continue to be targeted. Since the start of the conflict more than five years ago, UNICEF has verified more than 4,000 attacks on schools. One quarter of all schools no longer function because they are either damaged, destroyed, or used as shelters to host families fleeing violence. Syria’s education sector has lost more than 52,000 teachers. The country has lost two decades of educational progress.

More than two million Syrian children have been forced to drop out of school because of displacement caused by the fighting, destruction or closure of schools, and lack of teachers. The conflict is also forcing children out of school in other ways — when their parents are killed by fighting, when they are separated from family members, when they are forced into work to support their families, and when girls are forced into early marriages, often by parents who hope this will help keep them safer from violence.

Each student, a story of struggle

For the students who overcame these dangerous obstacles, there are stories of passion for learning and education, and a collective determination to sit for exams, gain their diplomas and make their contributions to a better future for Syria.

Fourteen-year-old Hadi had to leave school before grade 9 to work to support his family. “For the last couple of years, I have been working and preparing for my exams at the same time,” he explained. “I relied on self-learning books to study.”

Others, like Ghadeer* from Raqqa, were forced to marry because there was no other option in the difficult wartime conditions. “It was difficult for a girl to study in my city,” said Ghadeer. “I lost three years of school, so I decided to leave school and get married so I could take care of my family.” 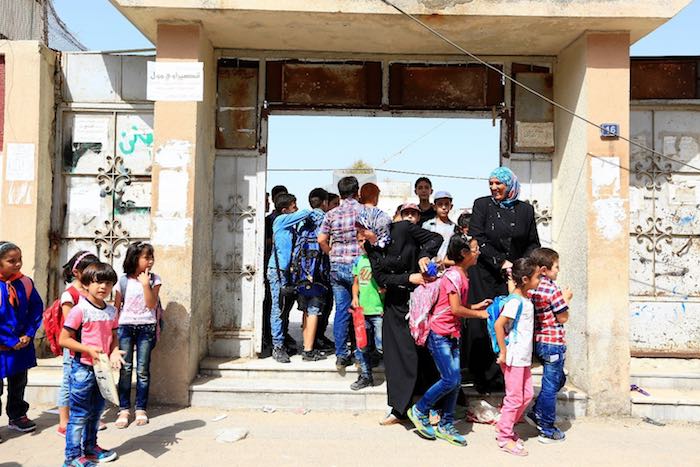 Mothers picking up their children from a school in Homs, where a long and severe siege has caused a shortage of school books and teaching aids. ©UNICEF/2015/Syria/Omar Snadiki

“I had to wait for four years to sit exams,” said Fatima*, now 21. Along with Ghadeer, she managed to reach the exam center in neighboring Hasakah. “During these four years, I studied hard, only to learn that exams were canceled in my city. I felt like all my hard work went up in smoke.”

Batoul*, in Idlib, explained the threats to education in her town. “I missed school for one month because I was so scared for myself and my father.” When armed groups imposed new controls on education in her area, schools were shut down and changes were introduced to the official curriculum. Batoul is not the only one in her family facing obstacles. She said that her parents, both teachers, are constantly threatened. Batoul made the dangerous trip with her mother out of Idlib to Hama in May to sit for her grade 9 exams.

Others, like Ahmad*, are determined to learn despite living under siege and with constant shelling. He explained that sometimes children are too hungry to concentrate and study.

We studied under siege and we were often hungry.

“We studied under siege and we were often hungry. We used to study in the daylight, because there was no electricity — not even candles — to allow us to read during the night,” said the 19-year-old who prepared for the grade 12 exams under the most difficult circumstances.

“Many of my friends would get dizzy, as they didn’t have anything to eat and lacked protein to keep them going during the school day. I saw my maths teacher faint one day because he had nothing to eat, but he was still coming to school to teach us.”

“I failed last year’s grade 9 exams,” said Mazen*, also from rural Damascus. “There was a lot of fighting and it was difficult for me to study. Every morning, we used to start school early at 5 a.m., but only for three hours because of the shelling.”

“I borrowed lecture notes and books from other students to prepare for the exams,” explained Ghadeer, who was pregnant when she decided to return to school. 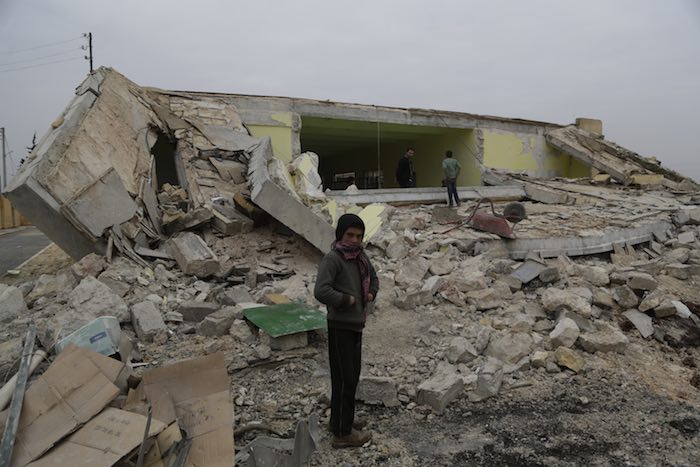 A child standing in front of his flattened school after bombardment in rural Aleppo. In Syria, one in four schools is damaged, destroyed or occupied for military purposes or to host displaced families. ©UNICEF/UN018873/Alshawi

Ghadeer traveled from Raqqa to Hasakah with her five-month-old baby girl and grandmother, who offered to help take care of the infant so that her granddaughter could continue her education.

“Giving my granddaughter a chance to complete her exams gives me great happiness,” said Ghadeer’s grandmother, who does not know how to read or write.

“These girls should have a better future than ours and this can be done only through education,” she added.

Hadi, Ghadeer, Fatima, Batoul, Ahmad and Mazen are just a few of the 7.5 million children in the Syrian Arab Republic who continue to try to survive and keep their dreams alive despite the deadly conflict all around them. For them, education is the hope of a better future.

Education is our weapon for a better future

By the end of June, more than 10,000 children had taken these perilous journeys, completed their exams and were readying themselves to travel home across conflict lines. Many returned with the pride of knowing that they had achieved long-held dreams, carrying their diplomas with plans for future study. They had met new friends and inspired one another.

We can only end the suffering from this war if we keep learning.

“I want to send a message to children across the world,” Batoul said as she prepared to return home to her parents. “Education is our weapon. We can only end the suffering from this war if we keep learning.”

The message from all of the children of Syria is loud and clear: They want an education now. We owe it to their courage and determination to support their dreams of building a better future.

* The children's names have been changed to protect their identities.