UNICEF stands in solidarity with the people of Lebanon and continues to support children in need two years after the deadly blast.

Today marks a day of solemnity as the world remembers the devastating Beirut Port explosion on August 4, 2020, which injured more than 6,500 people and killed over 200. Surrounding neighborhoods —hospitals, schools, businesses and homes — crumbled in the blast, disrupting the lives of over 300,000 people, including 100,000 children. UNICEF stands in solidarity with the people of Lebanon and continues to support children two years after the blast.

The explosion also interrupted children’s access to education. UNICEF and its partners have been rehabilitating the infrastructure of local schools, many of which serve refugees, so they can once again become safe places for children to learn, play and grow. Several child-friendly resource spaces have been set up around affected neighborhoods to provide enhanced protection for children in need of mental health counseling and psychosocial support as part of their recovery from the shock of the blast. 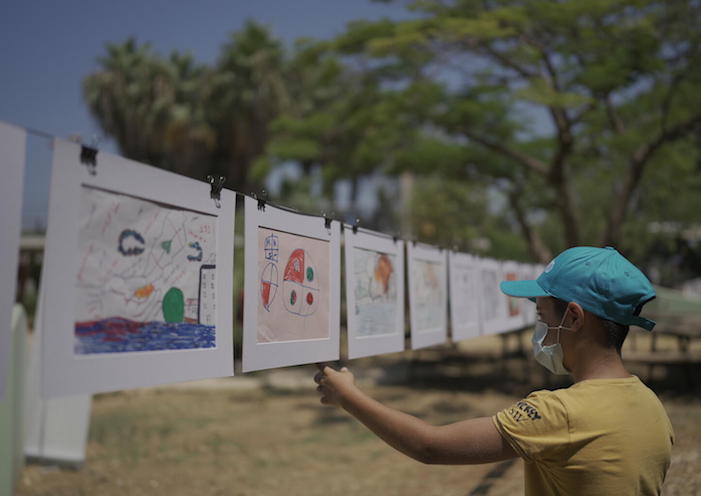 A boy admires artwork created by his peers and displayed in Beirut's Karantina Public Park on August 3, 2021, one year after a warehouse exploded near the Port of Beirut. The exhibition was an opportunity for children impacted by the deadly blast to share their feelings and opinions through drawings, paintings, poems and quotes. © UNICEF/ UN0497690/Choufany

Local youth continue to play a crucial role in UNICEF’s humanitarian response and ongoing work in Lebanon. In the days and weeks after the blast, nearly 1,800 of Beirut’s adolescents came together alongside UNICEF to deliver supplies to households and assist families in clearing rubble. These efforts resulted in the cleanup of an estimated 2,000 homes and the distribution of 20,000 hot meals. The teens also participated in UNICEF’s Technical and Vocational Education and Training courses while engaging with their community in tasks supporting first responders. UNICEF youth network volunteers gather on the devastated Mar Mikhael to help some of Beirut's citizens in the clean-up after the port explosion in 2020. © UNICEF/ UN0495993/Masri

During emergencies such as these, Diaspora groups and organizations have stepped up to garner much-needed resources. Through this support, the children of Beirut are given the boost that they need to recover from the lasting effects of the blast, returning to days filled with normalcy, imagination and play. We are grateful for Diaspora partners such as the World Lebanese Cultural Union who have donated to the ongoing emergency in Lebanon.

Unfortunately, the blast only escalated the crises that families in Lebanon already face, such as rising poverty and unemployment, high inflation and the lasting effects of the COVID-19 pandemic. Lebanon’s youth have been particularly affected; 3 in 10 young people have left school to help support their families. Youth face an unemployment gap of 60 percent because of these deteriorating economic conditions. Diaspora communities in Lebanon are disproportionately affected: 90 percent of Syrians live in poverty and 50 percent of Syrian youths are out of school and unemployed.

UNICEF has worked in Lebanon for 70 years to ensure every child is healthy, educated, protected and respected. Learn more about the growing needs in Lebanon here. UNICEF will continue its outreach to concerned members of the Diaspora community who have a shared mission to empower children through gifts that support UNICEF’s multi-sectoral programs. Together, we will relentlessly pursue a better world for every child.

For more information and partnership inquiries, please reach out to Arantxa Moreno from the Diaspora Partnerships team at amoreno@unicefusa.org .

Top photo: On August 6, 2020, a boy looks out over the Beirut Port area following a massive blast that destroyed neighborhoods and killed more than 20 people including six children. Over 6,500 were injured ,including an estimated 1,000 children. © UNICEF/ UN0496106/Sanchez