Putting Lives Together Again in Lebanon

After a deadly explosion shattered Beirut, UNICEF and partners leapt into action to help children and families get back on their feet.

In the months since a warehouse full of fireworks, kerosene and ammonium nitrate blew up in the Port of Beirut in August, killing 180 and injuring at least 6,500, including 1,000 children, the people of Lebanon have begun the slow process of putting their lives back together.

UNICEF has been a part of the response since moments after the blast, working with partners to ensure that children and families get the support and services they need to heal and recover.

UNICEF is helping traumatized children recover from the devastating blast

"Everything was in ruins. People around me were crying," says Faten, a Beirut mother of three, still shaken by the memory. "I said to myself, war has started. I just wanted to save my children."

Faten's children were terrified. Her eldest daughter still doesn't sleep at night. "Every two hours, she comes to me and asks, 'When will we die?' She asks me to stay by her side at night, feeling she will die any second."

"What these children have lived through could have a big impact on their mental health and social well-being," says UNICEF Child Protection Specialist Nisrine Tawily, who has been working with partners to provide traumatized children with mental health services. "It's very important to help these children and their families from the beginning."

Fatme, 8, who lives in the residential neighborhood of Karantina, told UNICEF about the horrors she witnessed. "We were getting dressed because we were going to visit my grandmother, and then the explosion happened and the glass fell on my cousin's face. She was bleeding and they took her to the hospital. My sister, Mimar, and my mother were screaming, and my mother was worried about my father, who was at work."

The explosion happened and the glass fell on my cousin's face. She was bleeding and they took her to the hospital. My sister, Mimar, and my mother were screaming, and my mother was worried about my father, who was at work.

"A big stone fell on my other cousin's back," Fatme continues. "They took him to the hospital and he was asking over and over where the keys to his car were. I was at my grandmother's and I was crying outside."

Months after the blast, Fatme is still worrying about what will happen to her city next. "I'd like to go to the mountains because they are saying that another explosion might happen," she says, adding that she wishes she could go back to school. "I miss school a lot because we all play together with the math teacher's blocks and she doesn't yell." On September 1, 2020, a girl participates in psychosocial activities at a Child-Friendly Space that UNICEF set up inside a public garden in the Karantina neighborhood of Beirut. Simple, comforting activities like sitting in a safe place, drawing a picture and chatting with a friendly counselor help children heal from trauma. © UNICEF/UNI366078/Choufany

Some 300,000 people were left homeless when the warehouse detonated, directly affecting 100,000 children in a country already in distress.

"The Beirut explosions have created additional trauma for the children of Lebanon, who also have to cope with the impact of a steep economic crisis and a raging pandemic," says UNICEF Executive Director Henrietta Fore.

Since the explosion, the number of COVID cases has more than doubled.

UNICEF is on the ground in Beirut, working to put the city back together, piece by piece

As part of its lifesaving work on the ground in Beirut, UNICEF has: 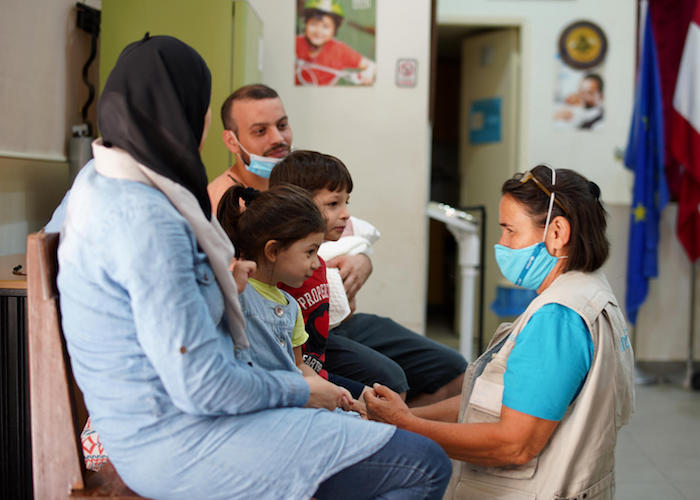 On August 10, 2020, at a health center in Beirut, a UNICEF doctor provides comfort and health care to a family affected by the port explosion. © UNICEF/UNI363575/

It will be a long time before the worst explosion in Lebanese history recedes from memory, but with support from UNICEF and partners, parents like Faten are determined to help their children survive and thrive. "I want to provide a bright future for my children," Faten says. "I want safety."

Your generous donation will help UNICEF continue to provide children and families in Lebanon with the supplies and services they urgently need to survive the current crisis.

Top photo: Fatme, 8, and her family were caught in the devastating blast that rocked Beirut on August 4, 2020. "During the explosion, my sister, Mimar, and my mother were screaming, and my mother was worried about my father, who was at work," she says. "I was crying and screaming, my sister went home and started to cry, and my mother was screaming in the street. My cousin was asking for help; her face was covered with blood." © UNICEF/UNI366053/Choufany