They fled violence and persecution — and made it all the way to the Olympic Games in Rio. The inspiration they provided continues.

For the first time in the history of the Olympic Games, a team with no flag and no anthem, the Refugee Olympic Team, competed in the Olympic Games. Their participation comes at a time when the global refugee crisis has reached epic proportions, with a total of 65.3 million people displaced at the end of 2015. The world has not seen so many displaced people since World War II.

And the number of the displaced is growing fast: Only 12 months earlier, it was 59.5 million. Most come from countries torn by war, poverty or political repression. By the end of 2015, 54% of the world's refugees came from just three countries: Syria, Afghanistan and Somalia, followed closely by South Sudan. More than half of the Refugee Olympic Team originally lived in Syria and South Sudan.

There Were Wild Cheers in the Stadium

While the Refugee Olympic Team did not win medals, their participation in the games has garnered huge reactions from supportive fans. When the Team entered the Maracanã Stadium in the Parade of Nations during the Game's opening ceremony, thousands of spectators went wild with their loudest cheers. The scene was one of intense emotion.

A Refugee Took on the World Champion

Popole Misenga, a judo fighter displaced and orphaned by war in eastern Democratic Republic of the Congo (DRC), is one member of the Refugee Olympic Team. Misenga won over the judo arena crowd during the Olympics' first week with a surprise victory over India’s Avtar Singh. In his second match, Misenga faced world champion Donghan Gwak of South Korea, and was defeated. 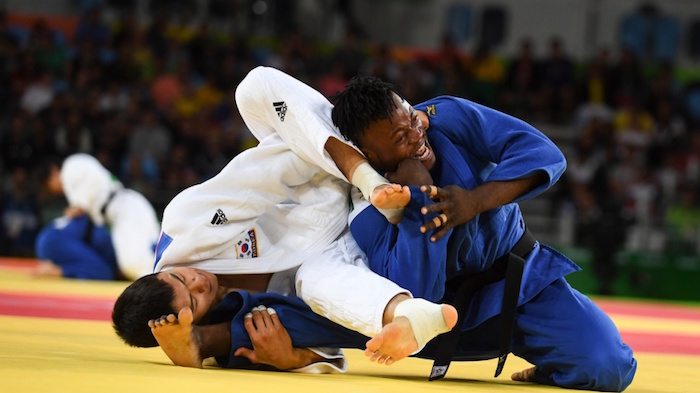 In his second bout of the day, Popole faced Donghan Gwak, a former world champion who went on to win the bronze medal. © UNHCR/Benjamin Loyseau

Despite the loss to Donghan, spectators at the match cheered Misenga vigorously with chants of “Po-po-le! Po-po-le!” When the world champion and Misenga rose after the fight, the applause for Misenga was so great that a bystander would have assumed he won the match.

The applause for Misenga was so great that a bystander would have assumed he won the match.

Inspiring a New Generation of Judokas

Indeed, even Yolande Mabika, another Congolese refugee who fled fighting in her hometown of Bukavu, has encouraged young people and the disadvantaged through her persistence in the face of tremendous challenges. Like Misenga, Mabika was separated from her family during the DRC's civil war. She endured extreme hardship at the hands of abusive judo coaches in the DRC, before claiming asylum in Brazil and making it to the Rio Games.

Though Mabika lost her first match, she has become an inspiration for countless Brazilians. During a visit to her judo training center in Rio de Janeiro after the match, fellow judokas, young and old, eagerly gathered around, firing questions at Mabika and Misenga about her experiences.

“It is my dream to achieve what these Congolese athletes did,” said one young Brazilian girl at the judo center. “I want to be part of the Brazilian team, to be an Olympic champion, world champion…. When I see Yolande and Popole fighting, they are very disciplined. They decided they wanted to fight in the Olympics and they did.”

A Congolese refugee in Brazil, Charley Kongo, said to reporters about the two judokas, “We are very happy. We are on a high. It’s a huge victory for us to be represented like this. To be recognized as human beings, as athletes, like everyone else. We are capable of being athletes, doctors, journalists. It sends a message that a refugee is like anybody else."

Commemorating the Athletes Through Art 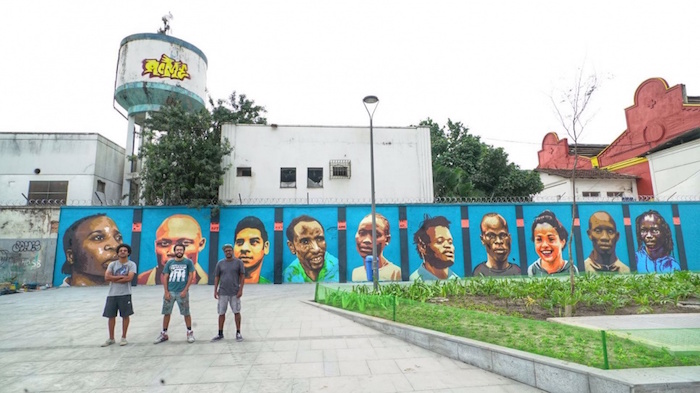 In a show of admiration for the Refugee Team, street artists in Rio unveiled a mural depicting each of the Refugee Olympic Team athletes. The mural stretches across the walls of an old warehouse in the formerly neglected old port area of Rio, which the City Council intends to revitalize as a tribute to the 2016 Olympics. The artwork will last long after the athletes and media have gone, leaving a reminder to Brazilians of the inspiration the Refugee Team represents.

Celebrities Joined the Cause

The tremendous obstacles overcome by the refugee athletes to get to the Rio Games roused celebrities to show their support, too. Notables, from actors Edward Norton and Danny Glover to Pakistani education activist Malala, encouraged the Team on social media.

But the performance of the Refugee Olympic Team also touched those in the camp in Kenya where half of the Team members come from. At the Kakuma Refugee Camp in the arid, flat lands of northern Kenya, nearly 200,000 refugees from South Sudan watched the Olympic competitions live. There, FilmAid, a nonprofit organization that teamed up with the Olympic Broadcasting Services, set up two huge screens. Thousands of refugees gathered there daily.

One girl, Mary, from Kakuma said, "I want to cheer the Refugee Olympic Team and get to see them bring medals home." Another camp resident, Dut Thiong, said, "I never knew that some games existed. The Olympics has opened my eyes." The refugees in Kakuma cheered when the South Sudanese runners excelled in the races. Their expressions fell when the runners had trouble.

I want to cheer the Refugee Olympic Team and get to see them bring medals home.

The Refugee Olympic Team closed out their participation in the Rio Games with Yonas Kinde, competing in the men's marathon.

Kinde fled his native country of Ethiopia to Luxembourg, trying to escape the fates of murder or imprisonment because of his political beliefs. In Luxembourg, Kinde worked odd jobs and drove a taxi to get by while taking French lessons; soon, he hopes, he will become a citizen.

Running through the rain, along the streets and beaches of Rio de Janeiro, Kinde finished the 26.2 miles with about half as many runners before him as after him. His placement mattered little. For him, making his way to an Olympic marathon was the fulfillment of a lifelong ambition.

Actor Edward Norton took to social media to encourage others to sign a petition to the UN urging greater action on refugees, in a spirit of solidarity with the Refugee Olympic Team.