Ten world-class athletes, forced to flee their homes, are being given a chance to compete this summer — meet two of them.

This month, a very special team is competing at the Olympics in Rio de Janeiro. For the first time ever, the International Olympic Committee has created a Refugee Olympic Team. More often referrbed to as Team Refugees, it is composed of ten world-class athletes, forced by conflict and persecution to flee their homes, who are being given a chance to compete. The team members hail from Syria, Ethiopia, South Sudan, and the Democratic Republic of the Congo.

The Refugee Olympic Team is a signal of hope.

At a time when more than 65 million people are displaced, many of them children, the participation of the team in Rio sends a powerful signal of hope to refugees around the world. Further, the team aims to promote unity among refugees of various backgrounds and overcome divisions with host communities. In the words of Yusra Mardini, 18, a Team Refugees swimmer, “You’re an athlete; you don’t think like you’re Syrian or from London or from Germany. You will just think about the race. You have your lane, your swimming cap, your swimming lesson. That’s it.” 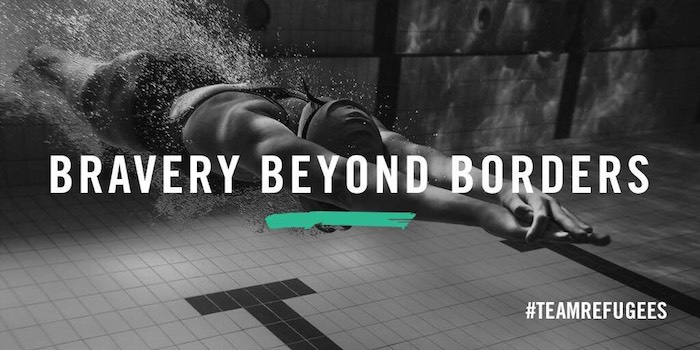 More children are on the run worldwide than ever before.

The Refugee Olympic Team represents the key crisis of our time: that of refugees and the displaced. According to a new report by the UN Refugee Agency, on average 24 people were forced to flee each minute in 2015 — four times more than a decade earlier.

A total of 65.3 million people were displaced by the end of 2015, compared to 59.5 million just 12 months earlier. The crisis has hit children badly. Shockingly, children made up about half of the refugee population in 2015, up from 41 per cent in 2009. In the first six months of 2016 alone, 73,000 children arrived in Europe by way of a sea crossing that has been deadly for too many. Nearly 100,000 child refugees were separated from their parents or traveled alone.

Shockingly, children made up about half of the refugee population in 2015.

The rapid rise in displacement rates results from three main causes. First, the conflicts that cause large refugee outflows persist; dramatic new conflicts are occurring more frequently; and sustainable solutions for caring for the displaced have been steadily diminishing for the last 25 years. For a growing number, there is nowhere to go.

The Refugee Olympic Team members feel it's important to tell their stories to the world.

Two of the athletes on the Refugee Olympic Team help give a voice to children caught up in the world's largest refugee crisis.

“The war was hard; sometimes we couldn’t train because of the war. Or sometimes you had training but there was a bomb in the swimming pool,” says Yusra Mardini, a Syrian refugee in Germany. For Yusra, developing her talent as a swimmer was a tremendous challenge in Syria.

She swam for her life, now she's swimming at the Olympicshttps://t.co/xEYoRERsGA#TeamRefugees pic.twitter.com/hDAzrQxZSL

As the conflict in Syria escalated, Yusra fled her home country along with her sister, Sarah, in August 2015, when she was she 17 years old. Having traveled to Lebanon and then Turkey, Yusra and several members of her family endured a life-threatening passage to the Greek Island of Lesbos. On the way, Yusra's boat started taking on water. Yusra and her sister slipped into the water and began pushing the boat toward Greece, saving the others onboard. After making it to Lesbos, they crossed numerous European borders on their way north to Berlin.

On the way, Yusra's boat started taking on water. Yusra and her sister slipped into the water and began pushing the boat toward Greece, saving the others onboard.

Having made it out of the horrors of the Syrian conflict and now on to Rio, Yusra has been thinking about how she can serve others through her sport. She said, “I want to represent all the refugees, because I want to show everyone that, after the pain, after the storm, come calm days."

Forced to flee the fighting in South Sudan in 2005 at the age of 9, Yiech Pur Biel, now 21, ended up on his own in a refugee camp in northern Kenya.

Journeying alone from his home town of Nasir, South Sudan, to the Kakuma Refugee Camp in Kenya, Yiech was like the ‘Lost Boys of Sudan’ in the 1980s and 1990s. He was one of thousands of South Sudanese children, displaced and orphaned by the Sudanese Civil War, to trek enormous distances before settling in Kakuma.

In the camp, Yiech started playing soccer, but grew frustrated at having to rely so much on his teammates. Whenever he ran on the field, he felt greater control over his own destiny. “Most of us face a lot of challenges,” says Yiech. “In the refugee camp, we have no facilities—even shoes we don’t have. There is no gym."

In the refugee camp, we have no facilities—even shoes we don’t have. There is no gym.

"Being a refugee is only a status. You can change that status to be a better person in life." Pur, #TeamRefugees pic.twitter.com/cZzgcjvE7W

Training over the last year has been long and difficult, but Yiech is upbeat. He believes his place on the Refugee Olympic Team can help to inspire and encourage other displaced people. "Being a refugee is only a name," he says. "But when you go and carry the flag of refugees, you are telling the world that we refugees, we are human beings like other people, you see?"

UNICEF invites you to “join the team” and support these incredible athletes as they fulfill their dreams. Post a photo on social media showing your support for the team with the campaign hashtag, #TeamRefugees. Fans from across the globe will be posting selfies throughout the games. Even better, join our contest on Twitter, Facebook and Instagram. Photos with the hashtag #TeamRefugees and @UNICEFUSA will be selected for prize packages including a #TeamRefugees hat and armband. 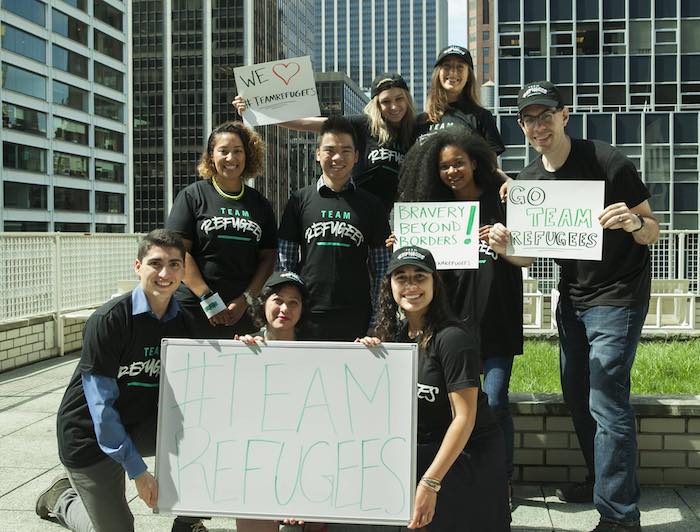 The U.S. Fund for UNICEF staff is rooting for Team Refugees! To celebrate, we're giving away ‪#‎TeamRefugee‬ hats and armbands — take a photo showing your support and share it with us by August 15 for your chance to win. ©UNICEF US Fund/2016