Refugee Children in the Middle East Are Facing a Cruel Winter

A serious shortfall in funding for winter supplies and assistance threatens 1.5 million children.

UPDATED January 22, 2018:  At least 12 Syrians including two children froze to death during a storm Thursday night in Eastern Lebanon near the Masna border crossing with Syria. The refugees were fleeing Syria's civil war, now ending its seventh year.

"Syrian people continue to risk their lives and the lives of their children in a desperate search for safety and shelter," says Gert Cappelaere, UNICEF Regional Director for the Middle East and North Africa. "More children could be among the dead as residents in the area and Lebanese authorities continue to look for people who are reportedly trapped in the mountains in freezing temperatures and snow."

UNICEF has been helping families cope with the harsh weather by distributing blankets, warm clothes and fuel to heat schools. "Children in Syria, Lebanon, Iraq, Yemen, the State of Palestine, Jordan, Turkey and many other countries across the globe living in conflict or impacted by conflict struggle every winter to keep warm," says Cappelaere. "The deaths of these two Syrian children is however a reminder that much more needs to be done."

Forced from their homes by conflict, parents are desperate to protect their children from the cold

The brutal civil war that began in 2011 has had a devastating effect on the nation's children. Since the start of winter, families who have fled the conflict have faced another challenge: freezing cold. Parents are desperate to protect their children, but resources are depleted from displacement and unemployment caused by conflict; families do not have money for warm clothing and fuel. So far, UNICEF has received only half of the $73 million needed to help children keep warm and healthy and continue their education as winter weather takes hold. 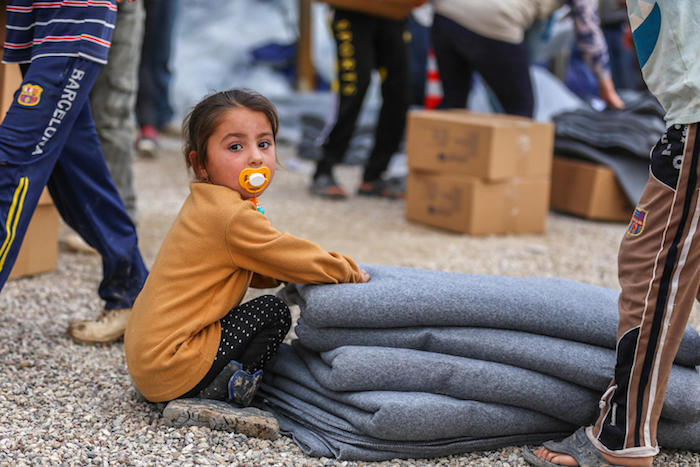 Winters are cold and harsh in the Dohuk Governorate near the Syrian border in the Kurdish region of northern Iraq, where about 104,000 people are now taking refuge. UNICEF brought these warm blankets to help protect refugees in Dohuk from the winter cold. © UNICEF/UN0127481/Anmar

Cold, frost, storms and snow compound the hardships of families who have been forced from their homes by violence. Many children live in makeshift shelters or camps with little to separate them from piercing winter winds. Cold damages the health of children, especially those who are already suffering. And when schools are cold, children cannot focus on learning; dropout rates rise and children’s chances of thriving in the future are diminished.

Without help, the cold could be yet another harsh blow to vulnerable children in the region who have already been through so much.

“Without help, the cold could be yet another harsh blow to vulnerable children in the region who have already been through so much,” said Geert Cappelaere, UNICEF Regional Director for the Middle East and North Africa. “Children’s health is weak from undernutrition, poor healthcare and displacement. Hypothermia and respiratory infections are a serious threat. If left untreated, children will die.” 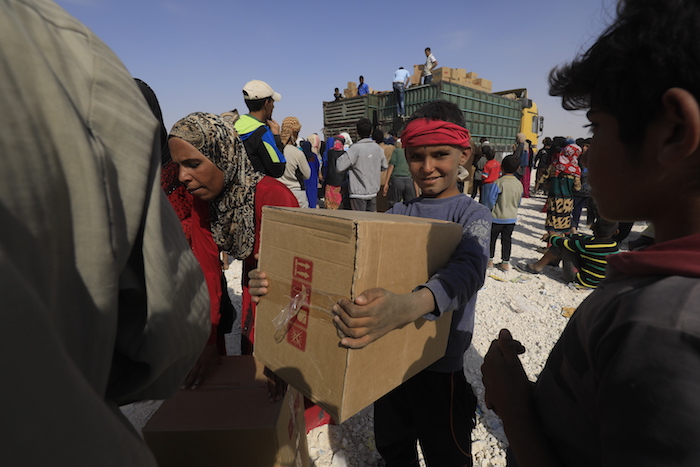 Families who fled to Areesheh camp from fighting in northeast Syria were sleeping in the open without tents or blankets when UNICEF distributed 2,000 winter clothing kits to help them withstand dropping temperatures. Ream, 19, received a kit containing a winter jacket, a thick thermal outfit, socks, shoes and and a woolen hat, scarf and gloves.  © UNICEF/UN047911/Herwig

The lack of resources could leave up to 1.5 million of the most vulnerable children across Iraq, Syria, the occupied Palestinian territory and neighboring host countries exposed to the elements. With sufficient funding, UNICEF aims to provide children across the region with warm clothes, thermal blankets, school heating and cash assistance to families. Laith, age 6, says “I don’t like the camp because it’s too cold and it’s full of mud. I wish I could live in a home instead of the tent.” He lives in a camp for internally displaced people in rural Quneitra, Syrian Arab Republic, where heavy snow falls in winter. © UNICEF/UN052595/Al-Faqeer

UNICEF has begun distributing clothes, scarves, gloves, shoes, warm blankets and cash assistance where possible to some of the youngest, the poorest and those living in besieged or remote areas, but the effort is being held up by the substantial gap in funding.