At a UNICEF-supported Child-Friendly Space, children like Fanta can try to reclaim lost childhoods.

The numbers are daunting. 2.4 million people — including hundreds of thousands of children — have been displaced by the violent Boko Haram insurgency in northern Nigeria causing an ongoing humanitarian crisis in the Lake Chad basin region.

The majority of the displaced are sheltered by communities who themselves count among the world’s most vulnerable. Vital infrastructure including health centers, schools, water pipelines and roads have been destroyed. Many of the children caught in the conflict have been subjected to unimaginable violence and abuse; they have lost their families, their homes and years of education.

The children are scattered across camps and host communities in four countries Chad, Cameroon, Niger, and Nigeria. In places like the displaced persons sites in Elh Mainari and Garin Wazam, Niger, children like Fanta and Moutari try to recover from the trauma and displacement they have experienced. Fanta, 9, is originally from Guesgara, Nigeria, but continuing violence drove her and her family away from their home. At a UNICEF-supported Child-Friendly Space at the Elh Mainari settlement, Fanta and other children can take part in daily recreational activities. The aim is to recreate a sense of normalcy for children who have fled conflict.

Moutari lived in Malam Fatouri, Nigeria with his dad, a fisherman, his mom and three siblings before arriving at a settlement for the displaced in Garin Wazam. "I remember all the attacks. I was fetching water with my big brother when the first attack started. We were not far from the terrorists and we saw the army who told us to leave ... the firing was nonstop. 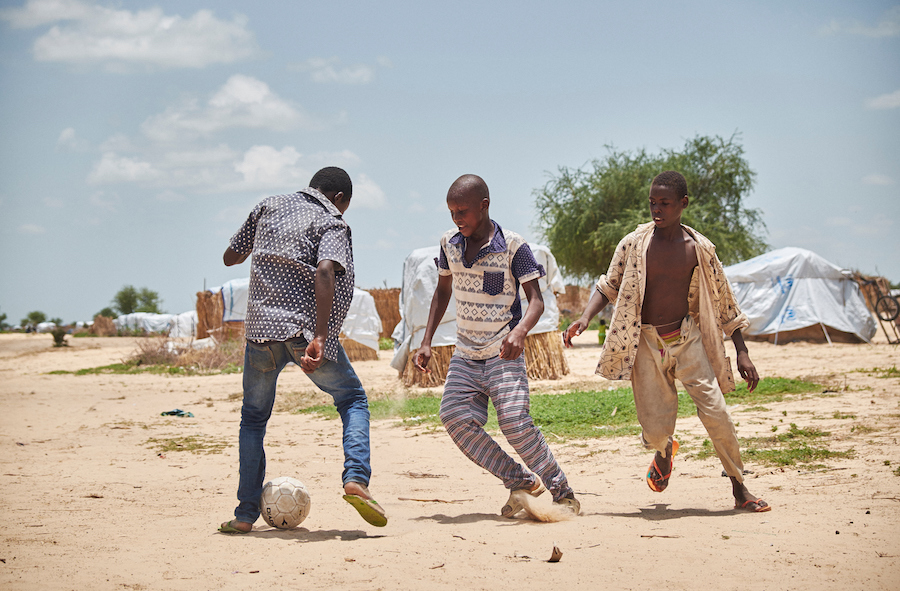 Moutari, (center), plays football with friends at the displaced persons site in Garin Wazam, Niger. "My favorite player is Cristiano Ronaldo," he says. "He makes me want to play."

UNICEF-supported programs aim to provide affected children with health care, psychosocial support, education and protection, but the crisis continues to take a toll on children, with constantly growing needs, especially in newly-accessible areas. In 2017, UNICEF is requesting over US$ 195 million to meet the lifesaving needs of women and children across the Lake Chad basin.