More Than Half of Ukraine's Children Displaced by War

One month into a brutal war, Ukraine's children are traumatized and in desperate need of assistance. UNICEF is on the ground in Ukraine and neighboring countries, working to provide lifesaving humanitarian aid to children and families.

Since the start of the war in Ukraine one month ago, 4.3 million children have been forced out of their homes. That's over half the country's estimated 7.5 million total child population.

More than 3.8 million people — including 1.8 million children — have crossed the border into Poland, Romania, Moldova and other neighboring countries to escape the ongoing violence since Feb. 24, according to UNHCR.

The rest of Ukraine's children remain inside the country, trapped in a national nightmare.

The war has caused one of the fastest large-scale displacements of children since World War II. — UNICEF Executive Director Catherine Russell

"The war has caused one of the fastest large-scale displacements of children since World War II," said UNICEF Executive Director Catherine Russell. "This is a grim milestone that could have lasting consequences for generations to come. Children's safety, well-being and access to essential services are all under threat from nonstop horrific violence." 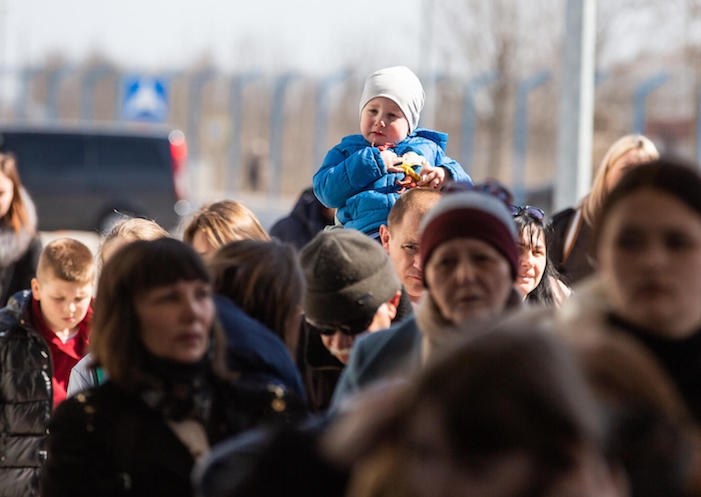 Refugees stand in line at the border crossing between Ukraine and Moldova at Palanca on March 24. © UNICEF/UN0613967/Vincent Tremeau

Heavily populated civilian areas are increasingly being targeted, with children's homes, hospitals, schools and orphanages coming under assault. The World Health Organization has confirmed 52 attacks impacting health care facilities across the country in the past four weeks, while Ukraine's Ministry of Education and Science has reported damage to more than 500 education facilities.

According to the United Nations human rights office, OHCHR, 93 children have been killed and 120 injured since the war began. These figures represent only those reports that the United Nations has been able to confirm: the actual toll is likely far higher. At the Kyiv Regional Perinatal Center in Ukraine, Nellia Izmailovna, Chief of the Children's Intensive Care Unit, cares for a child on March 7. The center's basement has been turned into a makeshift maternity ward. In partnership with the Kyiv City Administration, UNICEF is providing urgent medical equipment, hygiene products and supplies to maternity hospitals and children’s hospitals all over Kyiv, including the Kyiv Regional Perinatal Center. © UNICEF/UN0604221/Ratu

UNICEF has 140 staff members on the ground in Ukraine, working around the clock from five regional offices on both sides of the contact line to provide urgent assistance to children and families in need. In close collaboration with the Government of Ukraine, UN agencies and key humanitarian partners, UNICEF is scaling up emergency operations, including the delivery of medical supplies and equipment to dozens of hospitals across the country, where pediatricians and obstetricians are caring for injured children and delivering babies in basement hallways. 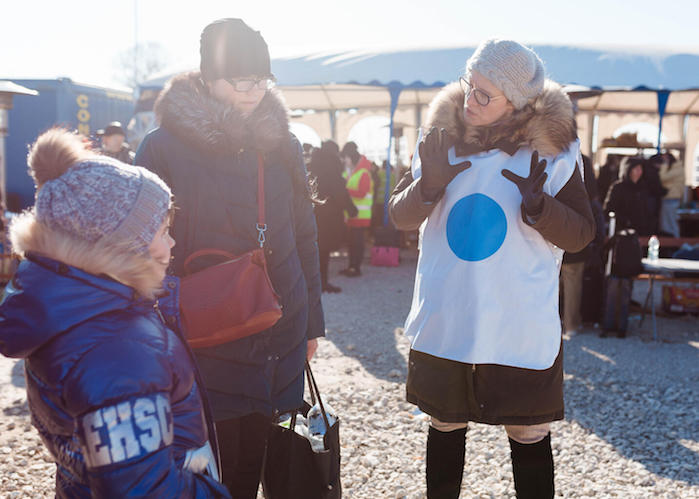 To aid mothers and children who have fled the country in search of safety, UNICEF and UNHCR, along with local authorities and partners, have set up an expanding network of Blue Dot refugee support centers where they can access emergency services. 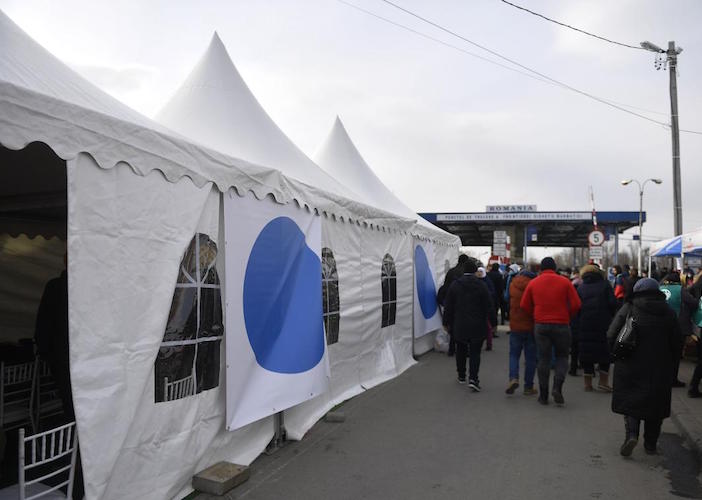 Blue Dot centers, like this one in Sighetu Marmatiei, Romania near the border with Ukraine, provide a safe space for children to play and an array of services for newly arrived refugee families. © UNICEF / Adrian Câtu

Urgent assistance for families forced to leave everything behind 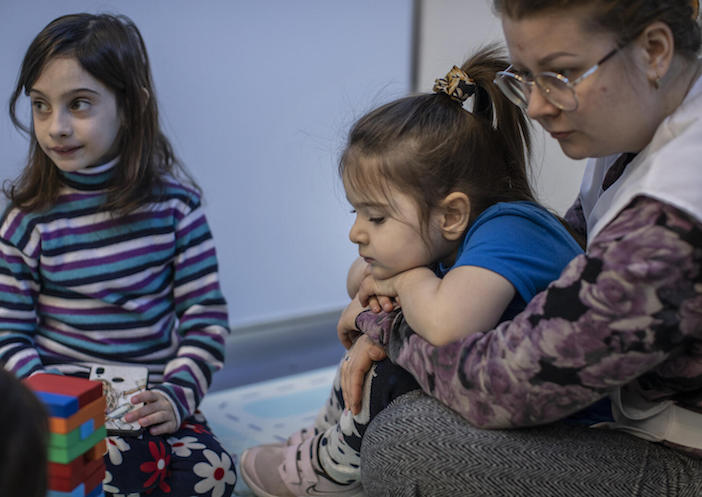 On March 20 in Chisinau, Moldova, a social worker plays with Sofia, 4, and Arina, 2, in a Child-Friendly Space set up for Ukrainian refugee children at a UNICEF-supported Blue Dot site at the Moldexpo Refugee Accommodation Center. © UNICEF/UN0610999/Modola

Staffed by social workers and psychologists and stocked with toys and games, the Blue Dot centers provide a sense of normalcy for children whose lives have been turned upside-down. “Mostly we do game therapy, but it will depend on the child, how ready he or she will be to play with us,” says psychologist Tatiana Andriesh, who works with children at a Blue Dot site in Palanca, Moldova. A child waits for her mother in the passport line at border control in Isaccea, Romania on March 4. © UNICEF/UN0610630/Vladimir

The threat of child trafficking is real and growing

More than 500 unaccompanied children were identified crossing from Ukraine into Romania between Feb. 24 and March 17. "The war in Ukraine is leading to mass displacement and refugee flows — conditions that could lead to a significant spike in human trafficking and an acute child protection crisis," Afshan Khan, UNICEF Regional Director for Europe and Central Asia, warned on March 19. "Displaced children are extremely vulnerable to being separated from their families, exploited and trafficked."

To protect the vulnerable, staff at Blue Dot centers are trained to identify unaccompanied and separated children and implement family tracing services so children can be reunited with their caregivers.

Displaced children are extremely vulnerable to being separated from their families, exploited and trafficked. — Afshan Khan, UNICEF Regional Director for Europe and Central Asia

UNICEF is urging the governments of neighboring countries and other countries of destination to strengthen child protection screenings at border crossings, especially those with Ukraine, to better identify at-risk children.

"In just a few weeks, the war has wrought such devastation for Ukraine's children," said Russell. "Children urgently need peace and protection. They need their rights. UNICEF continues to appeal for an immediate ceasefire and for the protection of children from harm."

Help UNICEF scale up relief operations in Ukraine and neighboring countries. Your contribution can make a difference. Donate today.

Top photo: A child refugee from Ukraine stands in line with her mother at the border crossing between Ukraine and Moldova at Palanca on March 24, 2022.  © UNICEF/UN0613966/Vincent Tremeau