Loss and Resilience, Again, One Month After Haiti's Earthquake

14-year-old Peterson survived two major earthquakes. UNICEF is helping him and thousands of other children in Haiti recover from trauma and reclaim their lives.

LES CAYES, HAITI — For more than a decade, 14-year-old Peterson has been living with the scars of tragedy.

On January 12, 2010, a magnitude 7.0 earthquake struck Haiti, claiming the lives of more than 220,000 people and destroying much of the country’s infrastructure. “That day when everything happened, [my mother] wasn’t with me," Peterson says. "She had gone to sell a few things in the market, and when she came back, she couldn’t find us.”

But – only 4 years old at the time – he doesn’t remember any of it.

“They told me I spent three days buried in the rubble. They say they found me on the third day and brought me to the hospital. They never said anything about the rest of my family.”

Peterson lost his arm in the 2010 earthquake. Since then, he has lived mostly with his godmother, especially after his mother passed away in 2020. He doesn’t know anything about his father.

“When I was growing up, I would cry when I noticed other people have two arms and I don’t,” Peterson adds. “It saddened me. But this is the way I am.”

Then, on the morning of August 14, 2021, Peterson and his godmother were visiting friends when the ground began to tremble. He recalls the events vividly. “I went out to bring water for my godmother and her friends, to cook. When I was out, I bumped into a friend and that’s when the earth started shaking. It was scary,” Peterson recalls. At least 130,000 houses were destroyed or damaged by the earthquake that rocked Haiti on August 14, 2021. Above, Eline Duberice, seven months pregnant, stands in a shelter built by her husband the day after the quake to protect her and their 2-year-old daughter from Tropical Depression Grace in Camp-Perrin, Haiti. © UNICEF/UN0503461/Rouzier

The 7.2-magnitude earthquake rocked the southwestern departments of Sud, Grand’Anse and Nippes, killing over 2,200 people and injuring more than 12,700.  Homes, hospitals and schools collapsed, leaving communities in urgent need of assistance. UNICEF estimates that some 1.2 million people, including 540,000 children, have been affected by the devastation.

Peterson and his godmother were spared from physical injury, but their home was badly damaged. “We saw the damages when I returned,” Peterson explains. “Now I don’t have anything left because of what happened. My godmother takes care of two other kids too, and has difficulty buying our books, school bags and shoes.”

Without a steady place to live, Peterson was forced on the move. “I sleep here and there,” he says. “And sometimes on the boulevard.”

Children bear the heaviest brunt of natural disaster. When emergency strikes, they can lose access to safe shelter, drinking water and hygiene facilities. They may be torn from critical health, education and protection services. And those who are separated from families or caregivers face a greater risk of violence, exploitation and abuse, with severe psychological and social consequences.

In its initial assessment, UNICEF identified nearly 2,500 children in need of psychosocial support and other protection services following the August 2021 earthquake. In Les Cayes alone, Peterson is among 178 children who have been separated from parents or caregivers, now receiving care at the UNICEF-supported IDEJEN center.

“There, we learn about body image, have lessons, play, and they give us meals,” Peterson explains. “I like to play games, use the phone. I’m not into football or sports, because I’m afraid of falling. I like to draw and do other things.”

"Every child who went through this earthquake requires psychosocial support, even if they haven't been physically injured." — Pierre Jean Stenio, UNICEF Haiti

The center, like many others UNICEF supports, provides more than lessons and recreational programs. It also serves to protect children from the risks of exploitation and trafficking, which surge for children who have been uprooted by natural disaster.

“Every child who went through this earthquake requires psychosocial support, even if they haven’t been physically injured,” says Pierre Jean Stenio, chief of the UNICEF Les Cayes field office. “Children [in rural communities] are even more in need of support, as they are at risk of trafficking. Many rural families have lost everything during the earthquake and might come to cities and towns, where the risk of human trafficking is way higher.” 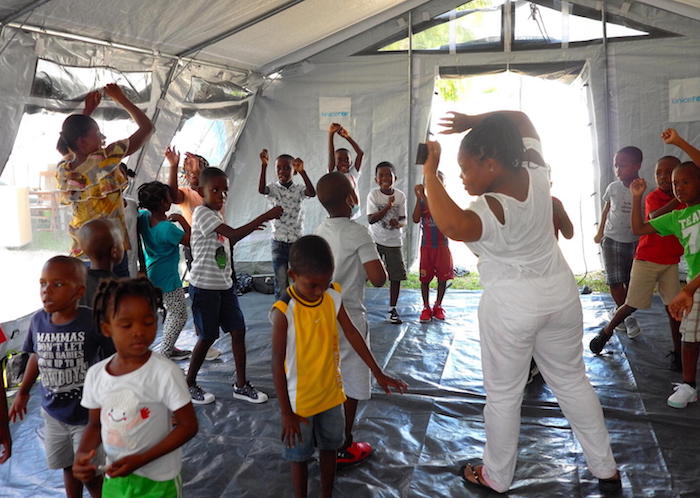 After disaster strikes, children need a place to play and feel safe. Above, children dance and play games at a UNICEF Child-Friendly Space set up in Les Cayes, Haiti in the days following the devastating August 14, 2021 earthquake. © UNICEF/UN0521943/Ergen

UNICEF works with partners in the health system, too, to ensure injured children who have been separated from their families and caregivers are protected from trafficking and other human rights violations.

In addition to psychosocial services, UNICEF continues to prioritize the resumption of essential services — including water and sanitation, health, nutrition and shelter — for children and their families. UNICEF and partners are distributing tarpaulins for emergency shelter, latrines and showers; water reservoirs for safe water distribution; and hygiene kits, including water treatment tablets, soap, menstrual hygiene materials and jerrycans.

For Peterson, the care he receives at the center marks just the beginning of his journey. “My dream is to be an artist and actor, and be on the internet,” he says. “To realize my dream, I’ll have to work very hard, starting from now. While I’m young, I should start doing the work so that I can grow.”

One month after Haiti's earthquake, UNICEF is reaching those in crisis with vital support and services

One month after the earthquake, 650,000 people, including 260,000 children in Haiti still need urgent humanitarian assistance. Even before the earthquake, children were suffering from high rates of malnutrition, displacement caused by gang-related violence and the secondary impacts of COVID-19. Now, the needs of Haitian children are more acute than ever as entire families have lost their homes, schools, access to water and health facilities, and more.

Learn more about UNICEF's emergency response in the aftermath of Haiti's earthquake.

Top photo: 14-year-old Peterson was only 4 when he lost his arm in Haiti's 2010 earthquake. Three days after the quake, neighbors found him buried in the rubble and took him to the hospital. His world was turned upside-down for the second time when a magnitude 7.2 earthquake struck southwest Haiti on August 14, 2021. © UNICEF/UN0516286/Crickx